A man in China has died suddenly while working as a front-line volunteer to prevent the spread of COVID-19 as the nation faces its worst outbreak in six months.

Na Jun, 54, died of a heart attack when he was disinfecting a neighbourhood in Dalian on Sunday morning, the local government announced. 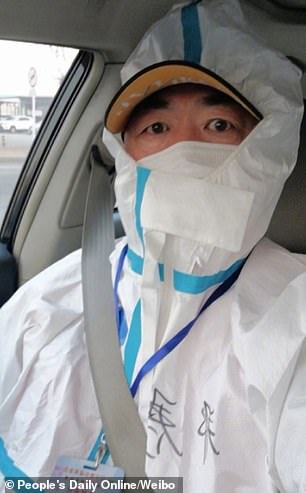 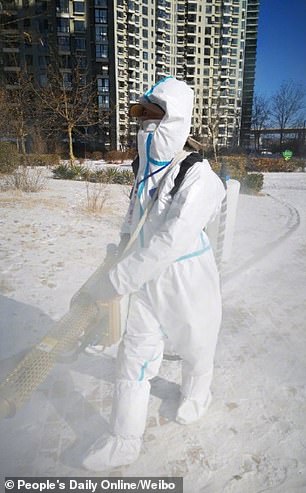 Pictures released by state-run newspaper People’s Daily Online through social media show 54-year-old Na Jun donning a full-body protective suit while disinfecting neighbourhoods of Dalian. The volunteer died of a heart attack on Sunday in the line of duty, officials have said

China has seen a surge in coronavirus cases, particularly in Hebei which surrounds Beijing.

The province, with a population of around 75million, has reported 468 infections in the past week, including 265 confirmed cases and 203 asymptomatic patients – people infected with the virus but not yet showing symptoms.

Hebei officials put two cities, including its provincial capital Shijiazhuang, under lockdown last week in response to the new crisis.

On Monday, the Beijing municipal government sealed off all villages in Shunyi, a district with 1.2million people to curb transmission.

This is the first time the country’s daily infection number has surpassed 100 since last July. 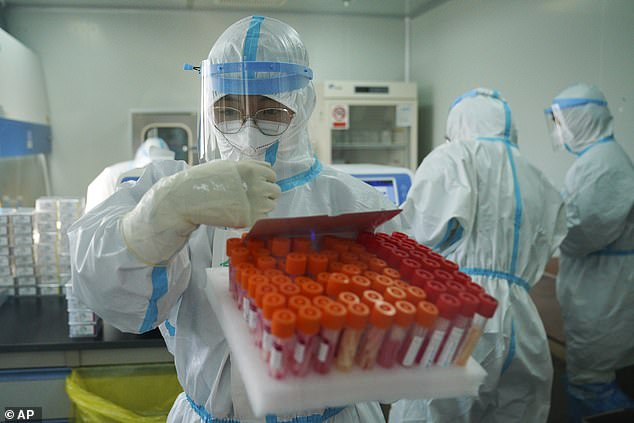 China has seen a surge in coronavirus cases, particularly in Hebei which surrounds Beijing. Pictured, a health worker checks on test samples at a testing lab in Shijiazhuang on Saturday 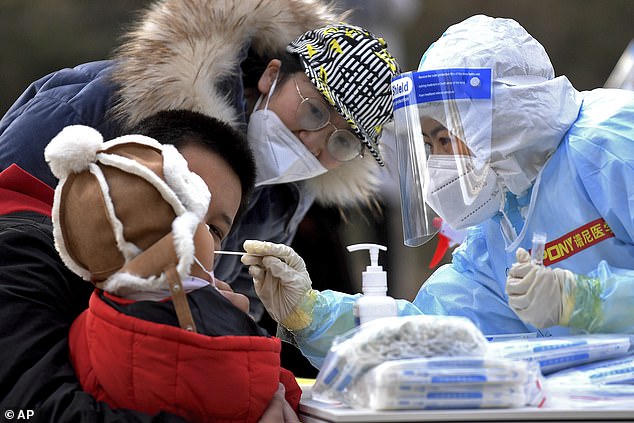 Hebei officials put two cities, including its provincial capital Shijiazhuang, under lockdown last week in response to the new crisis. The above picture shows a medical staff in a protective suit taking a coronavirus swab from a child near a residential area in Shijiazhuang on January 10 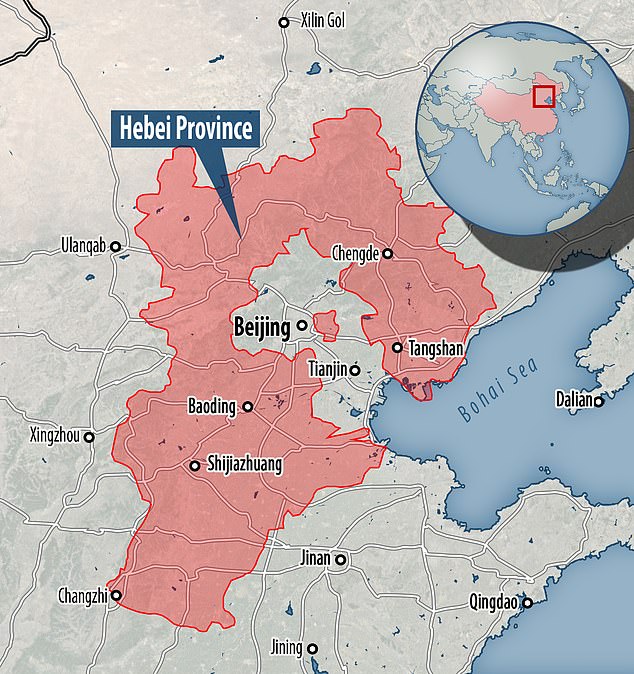 The Chinese province of Hebei, which surrounds Beijing, has emerged as a new virus epicentre

Volunteer Mr Na had a heart attack at around 9.30am on Sunday when he was decontaminating a residential compound in the Guangzhong area of Jinpu New District of Dalian, according to an official statement.

Footage released by the Dalian government on Twitter-like Weibo today showed a team of volunteers, mostly donning full-body protective suits, gathering around a man believed to be Mr Na.

One man was seen giving CPR on the person lying on the ground.

State-run People’s Daily Online also shared pictures of Mr Na on Twitter-like Weibo. One of them showed the 54-year-old man donning a hazmat suit and flashing a V-sign while holding a disinfectant fogger.

The outlet reported that Mr Na had participated in volunteer works three times since the beginning of the pandemic.

The Dalian government claimed that Mr Na was rushed to hospital and pronounced dead despite emergency treatment. It called him ‘heroic’ and ‘courageous’. 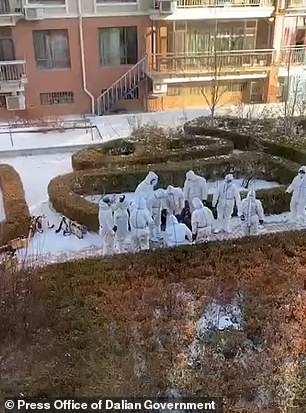 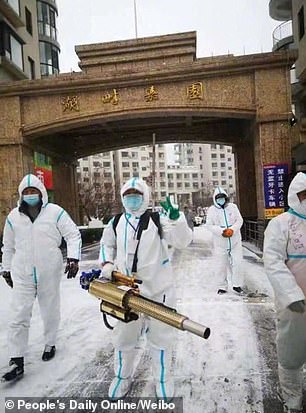 Footage released by the Dalian government on social media showed a team of volunteers, mostly donning full-body protective suits, gathering around a man believed to be Mr Na 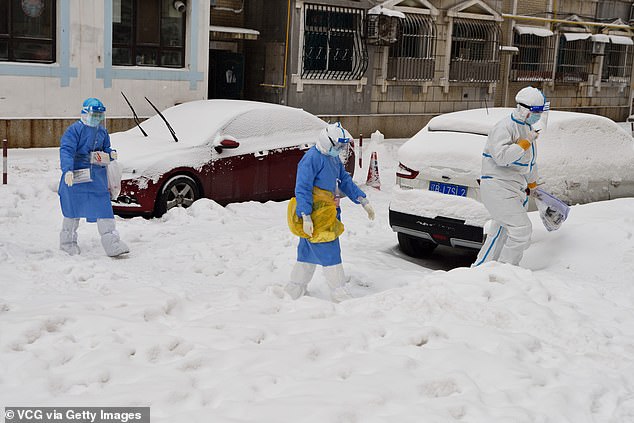 The Dalian government on Monday blamed its outbreak on contaminated foreign vessels. The above picture shows medical workers wearing protective suits walking towards residents’ houses to collect test samples after a snowfall at a quarantined residential block on January 7

Dalian on Monday blamed its outbreak on contaminated foreign vessels, saying the gene-sequencing information of the virus was different from that in previous outbreaks.

Most of the infected were dock workers handling cargoes from one ship from Russia, a Dalian official told reporters.

Three days before Mr Na’s passing, a community worker in Shijiazhuang of Hebei passed at a temporary testing site while organising locals to receive COVID-19 swabs, the local government said. 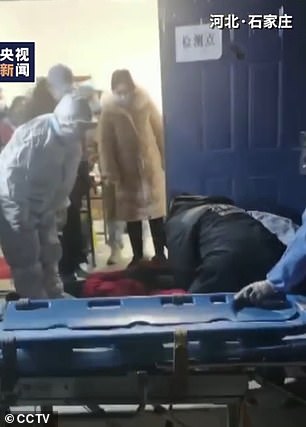 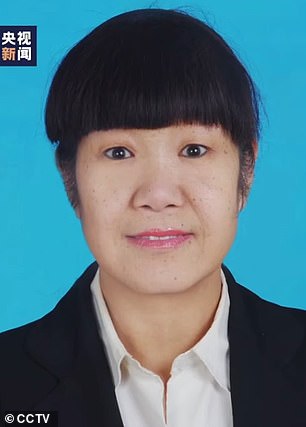 Li Ruizhi (right) passed on Thursday in the line of duty after feeling ‘unwell’ while arranging the residents of the Guotaijie neighbourhood in Shijiazhuang to undergo virus screening. Footage released by state broadcaster CCTV(left) showed medical workers trying to revive the woman

Li Ruizhi passed out on Thursday in the line of duty after feeling ‘unwell’ while arranging the residents of the Guotaijie neighbourhood to undergo virus screening.

The 55-year-old had offered to take part in the front-line work in temperatures lower than minus 10 degrees Celsius (14 degrees Fahrenheit), the Shijiazhuang government announced in a post on Saturday.

Six on-site medical workers gave first aid to Ms Li and called for an ambulance. She was declared dead in hospital after doctors had spent two hours trying to save her, the official release read.

Her cause of death remains unclear.

Hebei Province, the current ground zero in China’s fight against coronavirus, reported 82 confirmed COVID-19 cases for Sunday, including 77 from Shijiazhuang.

The province also reported 49 asymptomatic cases, all in Shijiazhuang, in the latest release from the provincial health commission.

Wuhan has closed three markets and launched a mandatory testing campaign after two people visited the city before testing positive for the coronavirus.

The two patients were diagnosed in the northern Hebei Province, China’s new COVID-19 epicentre that has seen over 400 infections in the past week.

The Wuhan authorities are now on the hunt for potential coronavirus carriers among their close contacts.

Officials have also started screening residents in the areas where the patients had visited in a bid to prevent a new outbreak. 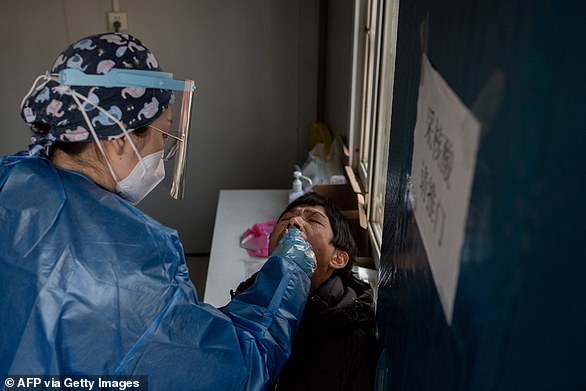 Wuhan has closed three markets and launched a mandatory testing campaign after two people visited the city before testing positive for the coronavirus. A resident is pictured being tested for the virus outside the Red Cross hospital in Wuhan on Monday

One of the patients had visited Wuhan between January 3 and January 4, according to a Monday statement from the Wuhan Health Commission.

The areas where they had been to, including three markets and a restaurant, has been sealed off and disinfected, the authorities said.

Local workers are also being tested for the virus while the patient’s close contacts are being traced via security cameras.

The other patient, a university student, had left Wuhan on December 25, a week before the outbreak emerged in Hebei.

The officials said they are also tracking down everyone who had been in close contacts with the traveller. 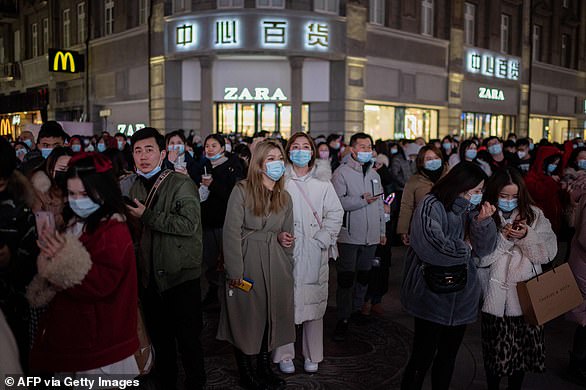 In Wuhan, the virus has been extinguished and residents are proud of its revival

The news comes as a year ago China announced the first death from a new virus in Wuhan – 12 months later, COVID-19 has claimed 1.9 million lives in an unrelenting march across the world.

But on Monday, the anniversary slipped by unmarked in Wuhan as commuters moved freely to work while parks and riverside promenades buzzed with walkers.

In the central Chinese city of 11 million where the first known outbreak started, the virus has been extinguished and residents are proud of its revival.