Welcome to lockdown 2.0: London is a ghost town and city centres are deserted across England on first weekend of restrictions… but beauty spots are crammed in autumnal weather

London is now a ghost town as city centres have been left deserted across England on the first weekend of Covid-19 lockdown restrictions, but beauty spots are crammed in the autumnal weather.

It comes in stark contrast to scenes earlier this week, when revellers were out in force before all the pubs and bars were forced to shut for the rest of the month.

But parks have remained bustling, with runners, walkers and cyclists seen at Bridgewater Canal in Manchester this morning, as people can exercise and socialise in public spaces with their household or one other person.

Costco in Watford, Hertfordshire, was also heaving with customers, who were spotted pushing trolleys piled high with toilet rolls and food.

The images come amid warnings that the country needed ‘dramatic action’ to reduce Covid-19 transmission, despite the Government’s ‘ghastly’ presentation of data to justify the latest lockdown.

Professor Sir David Spiegelhalter said it would not be sustainable for the health service to deal with the levels of coronavirus cases and hospitalisations without tougher measures than those imposed under the three-tier system.

The statistician and chair of the Winton Centre for risk and evidence communication at the University of Cambridge told BBC Radio 4’s Today Programme: ‘If this is going to go down, it is going to go down very slowly unless some dramatic action is taken, which has been taken.’ 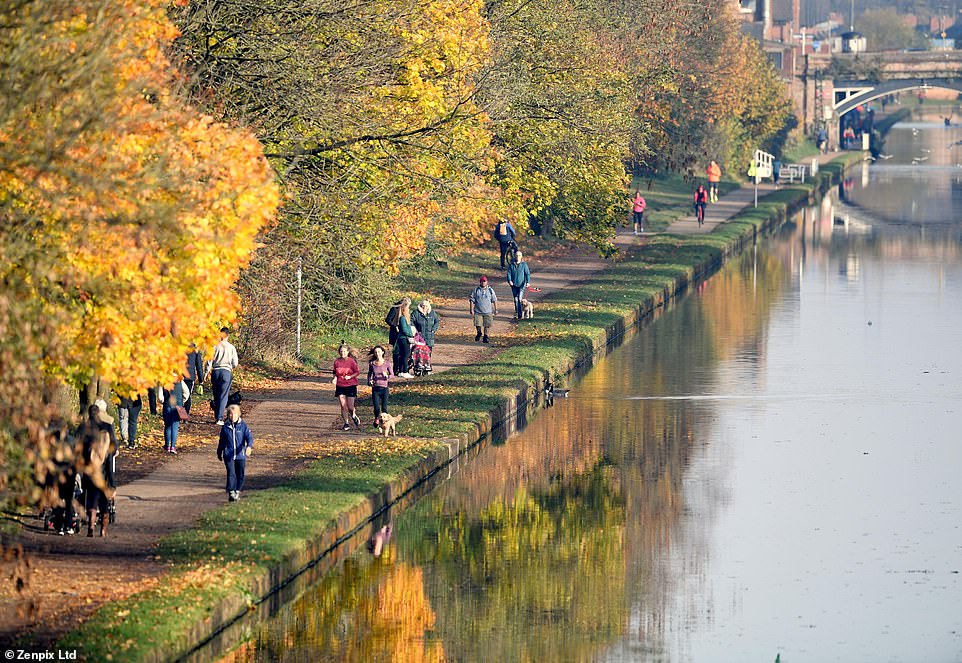 Runenrs, walkers and cyclists can be seen taking advantage of the autumnal weather at Bridgewater Canal in Manchester as people can exercise and socialise in public spaces with their household or one other person 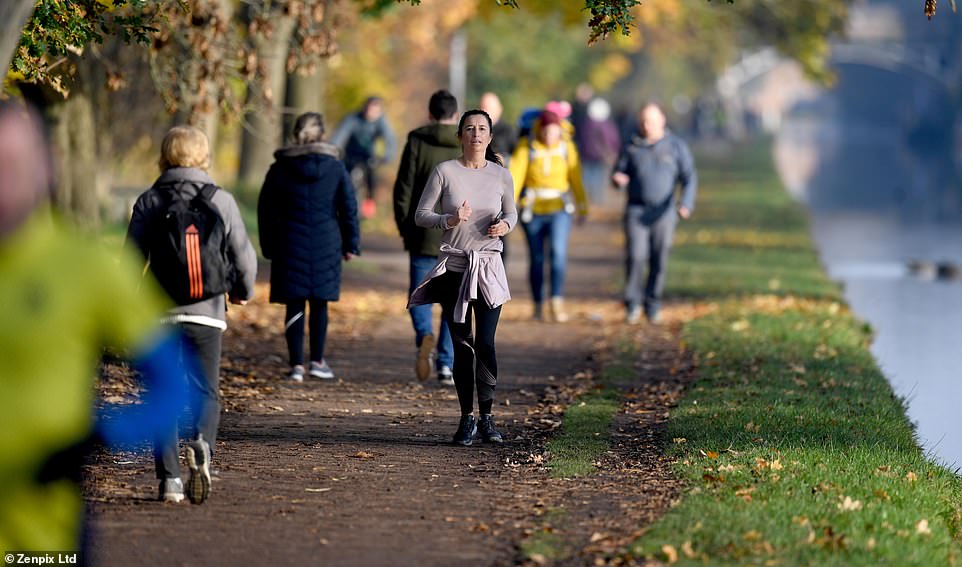 Joggers and walkers are seen running along a path by Bridgewater Canal in Manchester this morning. City centres have been left deserted across England on the first weekend of national lockdown, but beauty spots have stayed busy 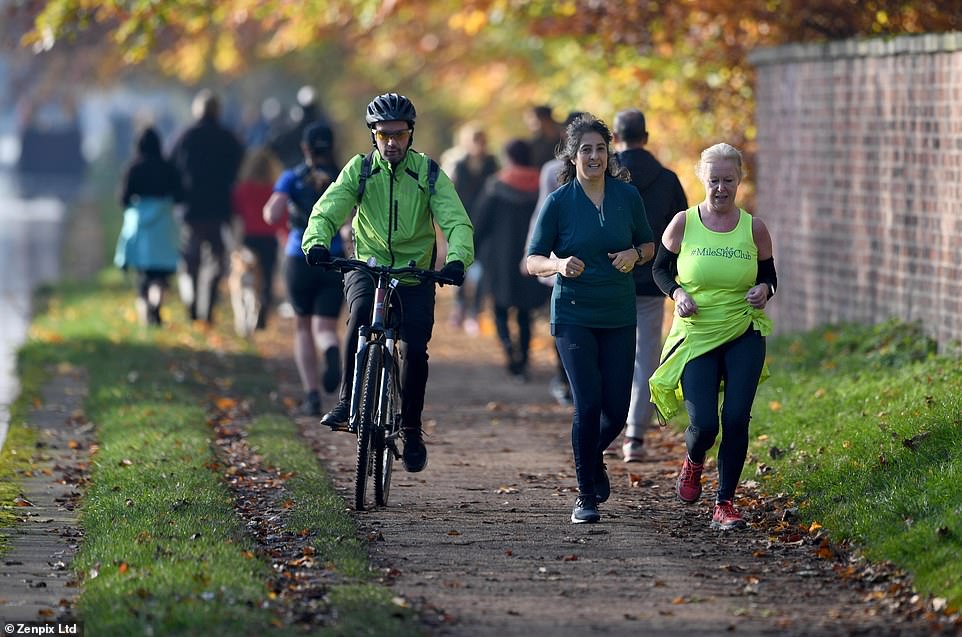 Cyclists and runners seen taking advantage of the autumnal weather along Bridgewater Canal in Manchester today. New data shows the rate of infections across England and Wales appears to be slowing down 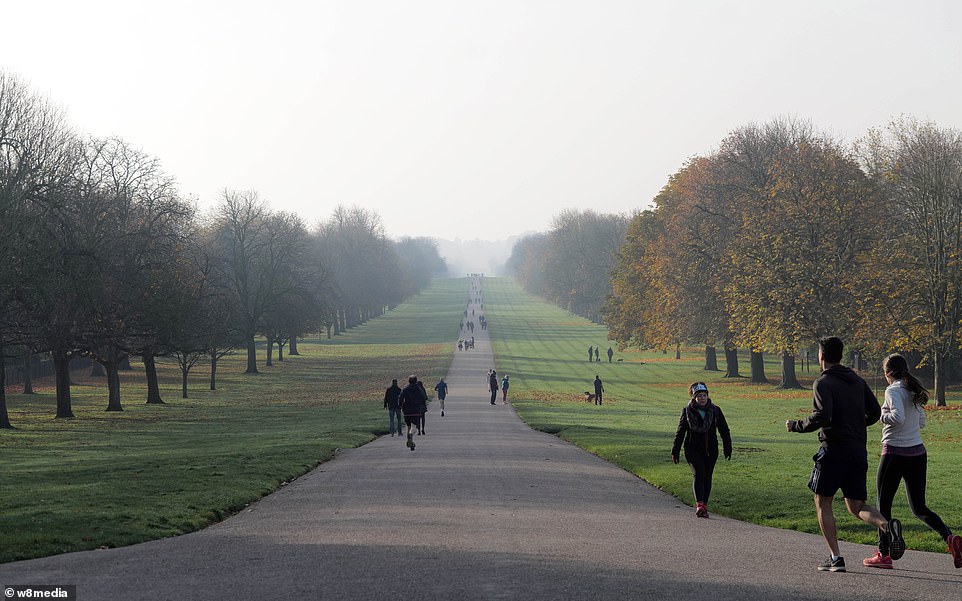 People out for an early morning jog in Windsor on the long walk during the first weekend of the second lockdown in England. While the infection rate has increased, ‘the rate of increase is less steep compared with previous weeks’, the ONS said 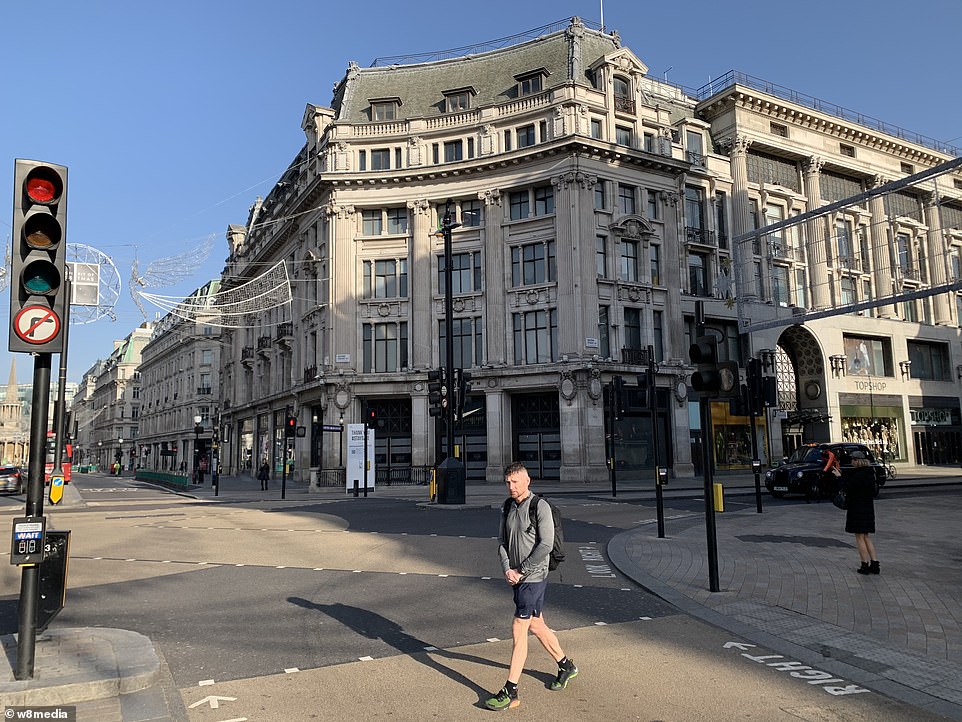 Oxford Street and Regent Street in London were left looking almost completely empty this morning, as restaurants, pubs and non-essential stores have closed amid the second coronavirus lockdown in England 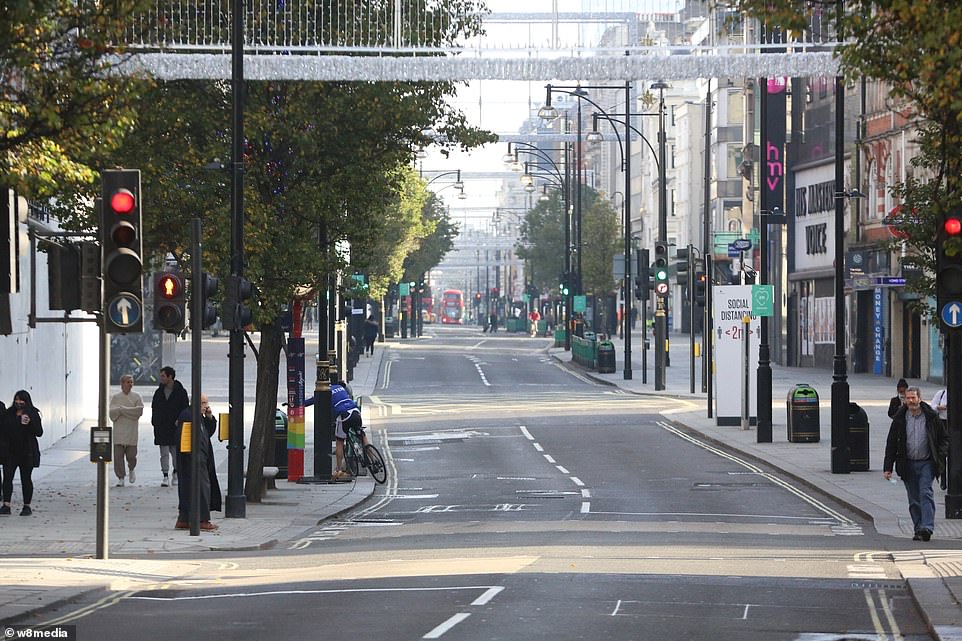 Oxford Street and Regent Street seen looking almost completely empty today, with a handful of people seen walking along the pavements as non-essential stores and other businesses have closed during the winter lockdown 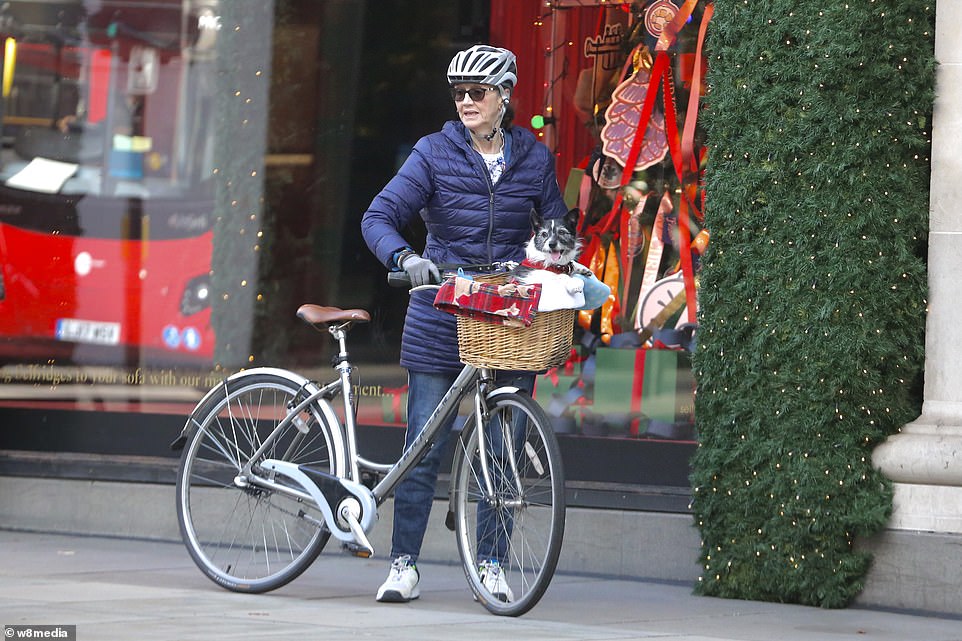 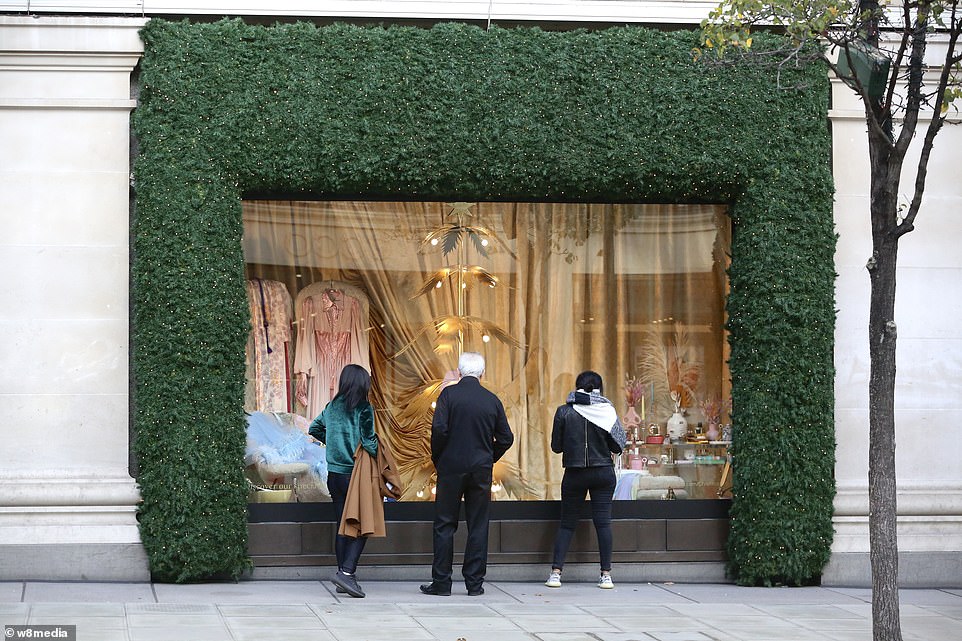 Three people stand in front of a closed store in London today as Oxford Street and Regent Street were left deserted during the lockdown, while parks remained busy as people are still allowed to exercise outdoors 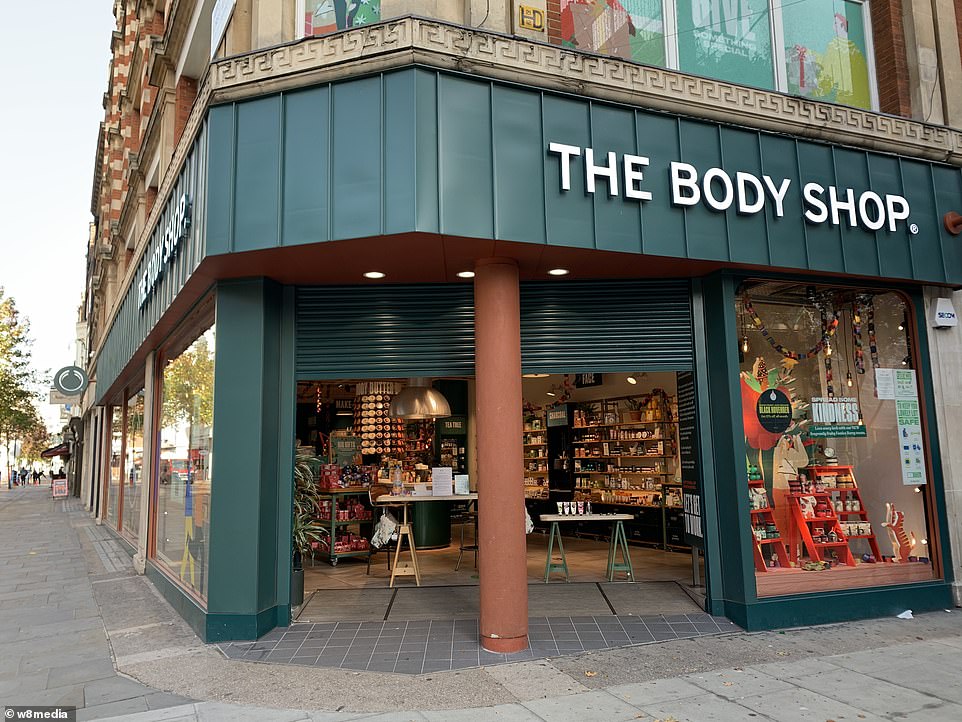 The Body Shop on Oxford Street in London. The chain temporarily closed in England on November 4 and will re-open on December 3, after the country entered its second lockdown to prevent the spread of coronavirus 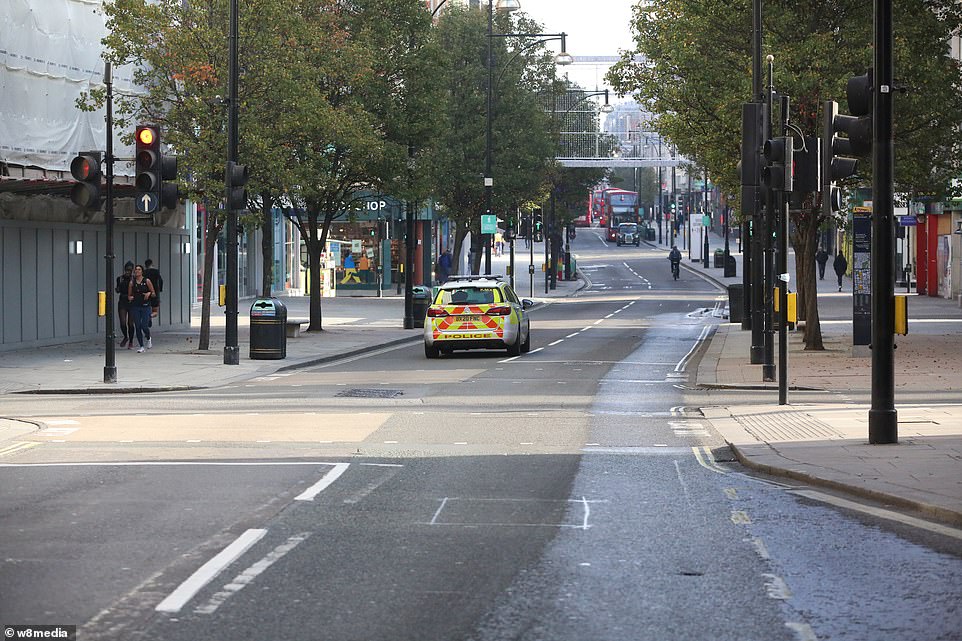 A police vehicle is seen on a road in London with the streets almost completely empty, as Oxford Street and Regent Street were left deserted this morning amid new restrictions which came into place at midnight on Thursday

Meanwhile, hundreds of people have been tested as part of a pilot mass coronavirus testing programme in Liverpool, with queues outside new test centres.

The armed forces have been brought in to the city to help deliver the scheme, which uses lateral flow tests to deliver results in under an hour for people who are not showing symptoms of the virus.

Mr Johnson has said the rapid testing pilot could be a ‘real way forward through the crisis’.

But health experts said plans to screen the population of Liverpool were not fit for purpose.

A group of academics said the potential for ‘harmful diversion of resources and public money is vast’, and warned the half-a-billion-pound project could be a ‘costly failure’.

The Government is expected to announce on Saturday that the blanket provisions allowing all pubs in England to serve takeaway food and drink will be extended, while Ronnie Scott’s Jazz Club and The Lowry in Salford are among eight cultural organisations and venues which will benefit from the latest round of coronavirus funding. 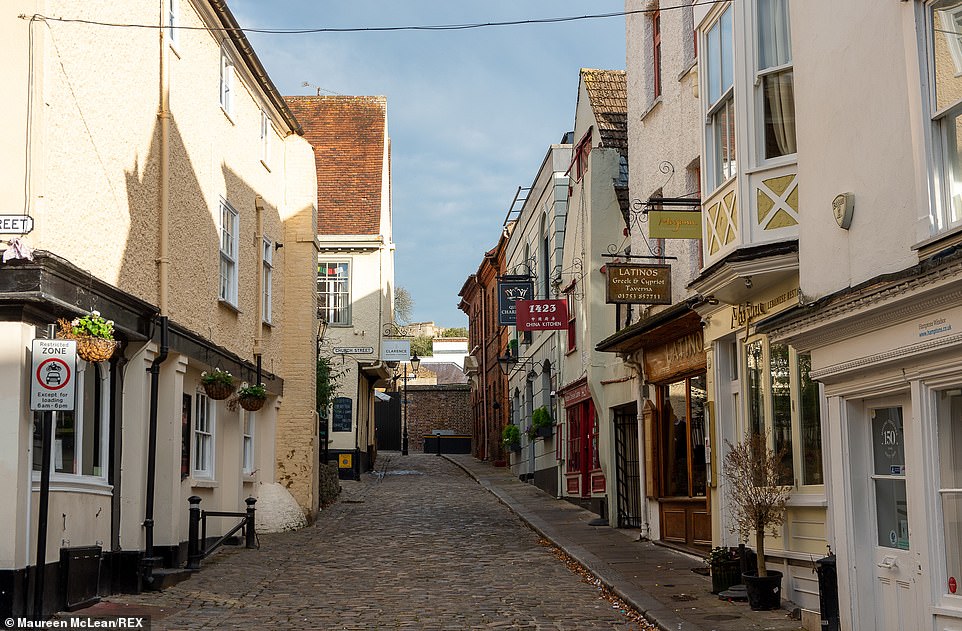 An empty cobbled street in Windsor yesterday, as the town remained quiet on the second day of the coronavirus lockdown in England, while more shops and cafes were open than the previous lockdown earlier this year 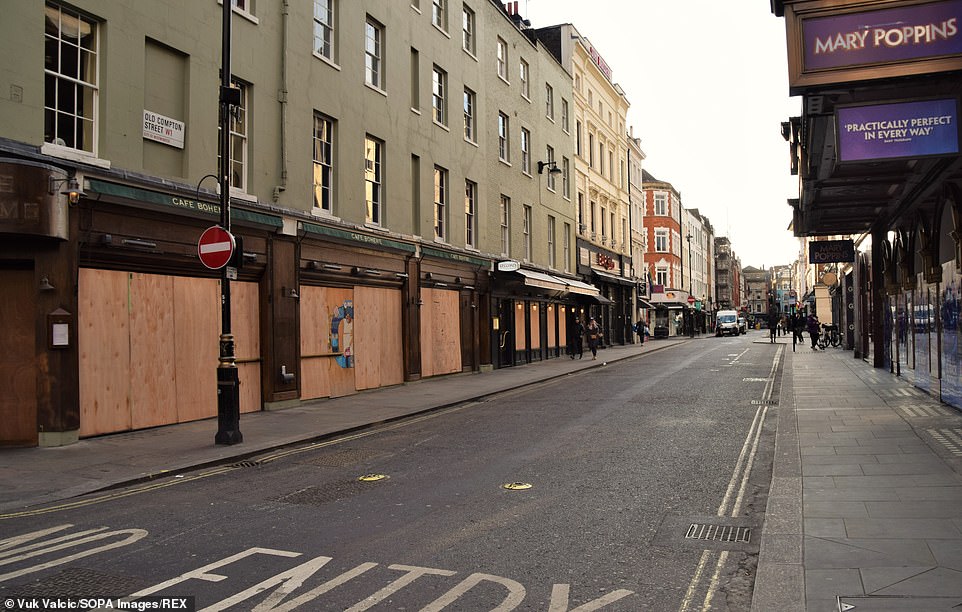 Daytime view of an empty and deserted Old Compton Street in London’s Soho yesterday with boarded up restaurants lining the road. Non-essential businesses have closed as part of the second month-long Covid-19 lockdown in England 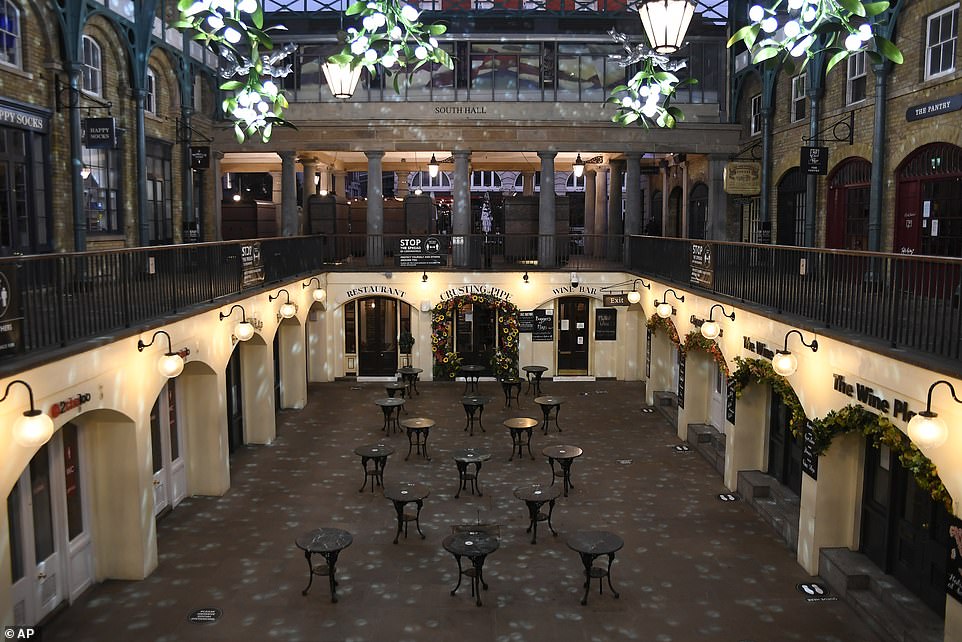 Empty tables of a bar and restaurants in the Covent Garden area of central London on Thursday, as Britain joined large swatches of Europe in a coronavirus lockdown designed to save its health care system from being overwhelmed 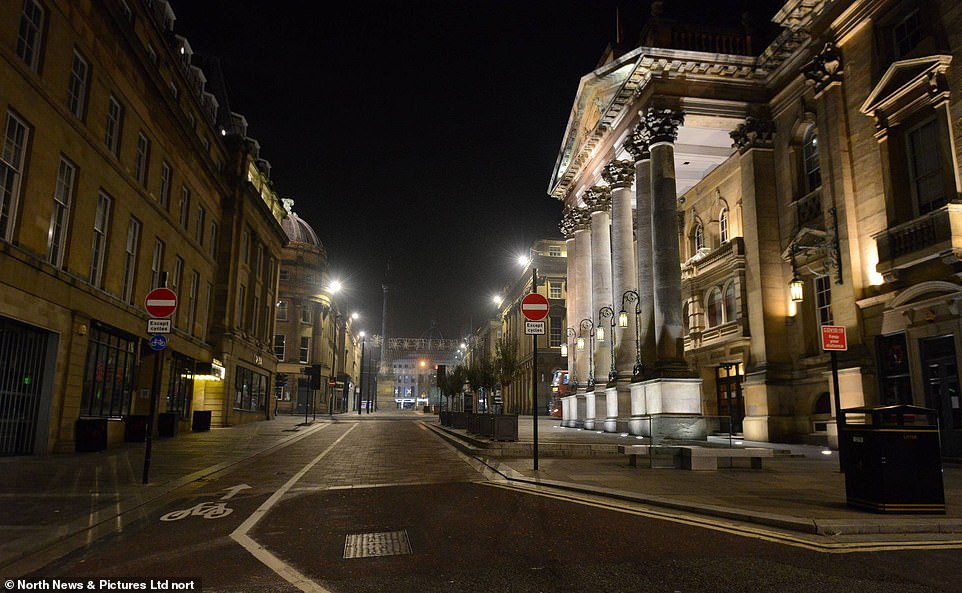 Deserted streets on Grey Street in Newcastle, with the deserted Theatre Royal, towards the right, seen last night following the second lockdown in England to help stop the spread of coronavirus. It comes in contrast to scenes earlier this week 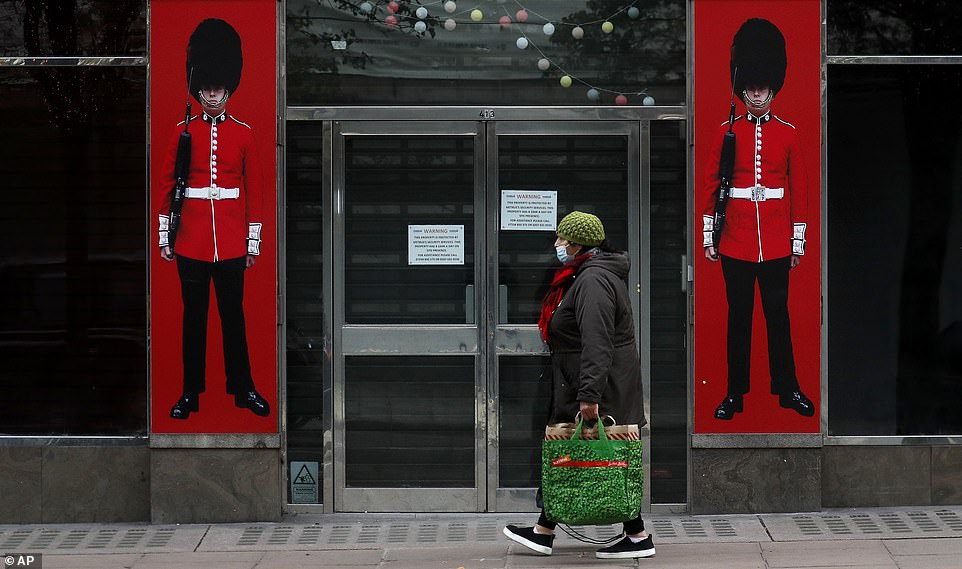 A woman wearing a face covering walks past a closed shop in London yesterday as non-essential stores, restaurants and pubs close during the second lockdown in England to help stop the spread of coronavirus

New data shows the rate of infections across England and Wales appears to be slowing down.

But while the infection rate has increased in recent weeks, ‘the rate of increase is less steep compared with previous weeks’, the ONS said.

After Denmark was removed from the Government’s list of travel corridors due to widespread outbreaks of Covid-19 in its mink farms, the Government has announced it is also imposing immigration powers against foreign visitors from the country.

From 4am on Saturday, all non-British national or resident travellers who have been in or transited through Denmark in the last 14 days will be denied entry into the UK. 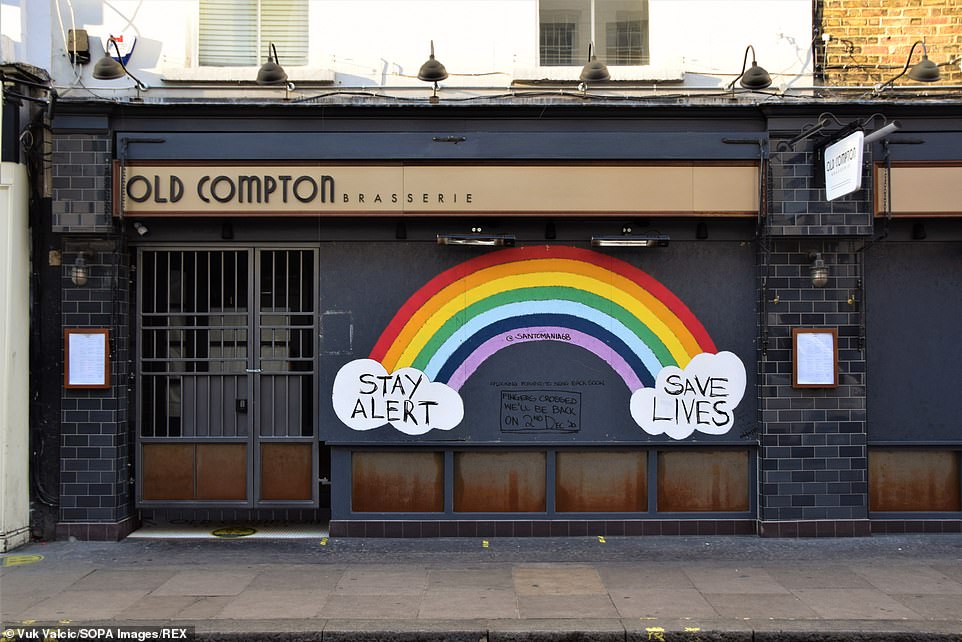 A daytime view of a Stay Alert, Save Lives rainbow sign outside a closed restaurant in Old Compton Street, Soho, London. Most shops, restaurants and businesses have now closed as part of the second lockdown in England 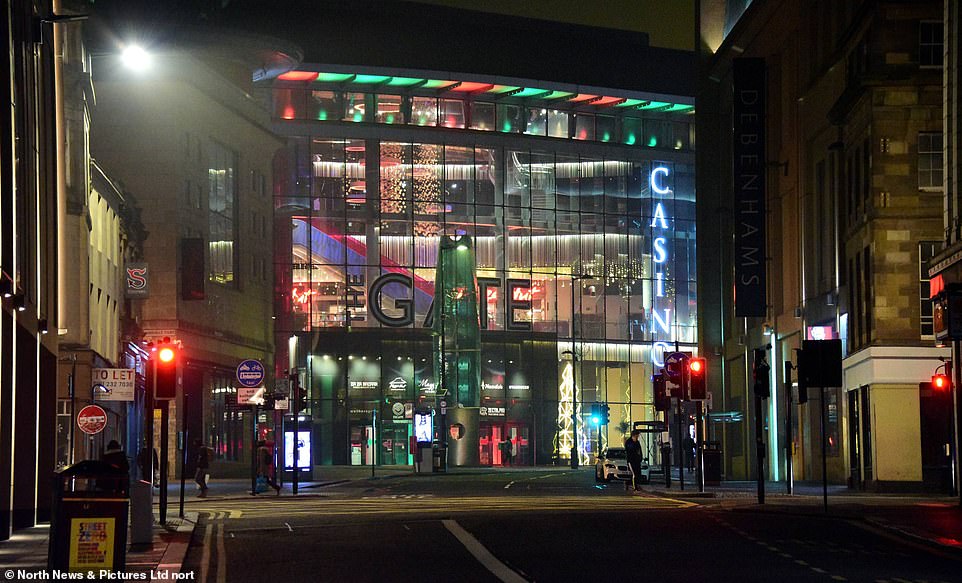 Deserted streets in Newcastle, showing the Gate Bar and Casino complex on Friday evening, following the second lockdown in England being introduced at midnight on Thursday to help prevent the spread of coronavirus 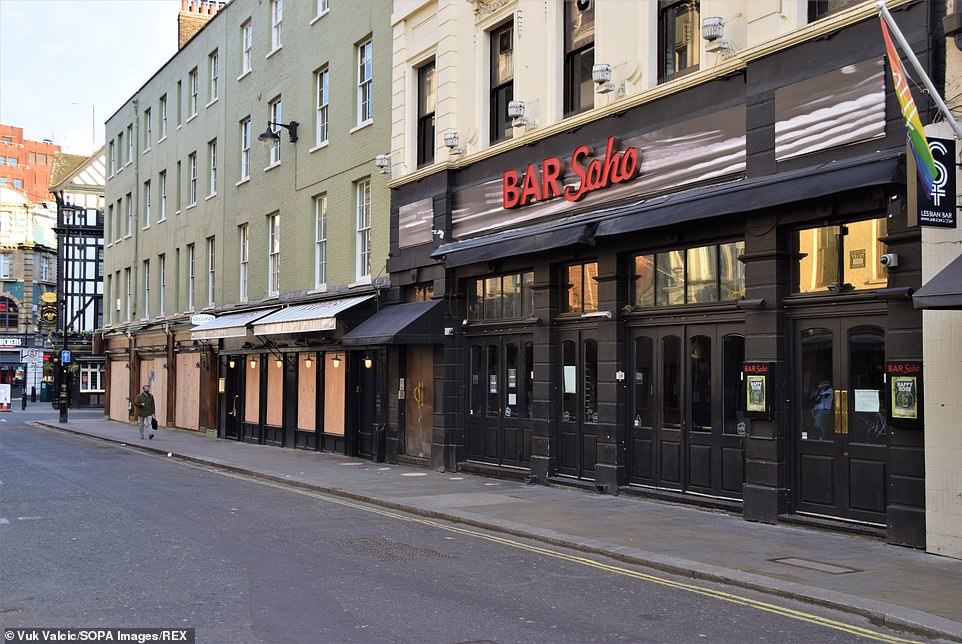 A daytime view of an empty and deserted Old Compton street in London’s Soho, showing a closed bar alongside boarded up restaurants. Non-essential businesses have closed for the rest of the month during England’s second lockdown 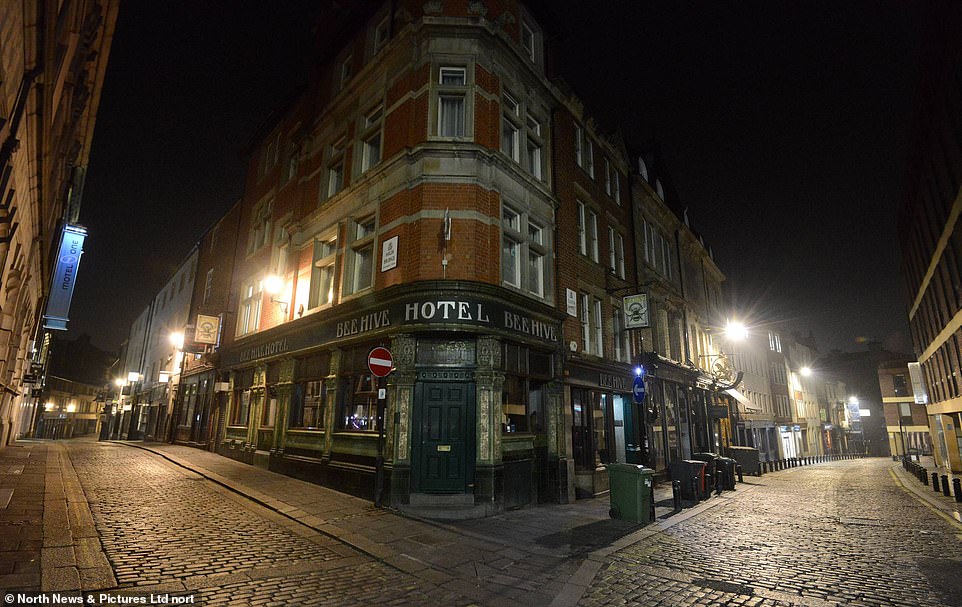 Deserted streets in Newcastle’s Bigg Market on Friday evening, showing a closed hotel, pubs and restaurants, in contrast to earlier this week, when revellers were seen out in force before all the bars were forced to shut for the rest of the month 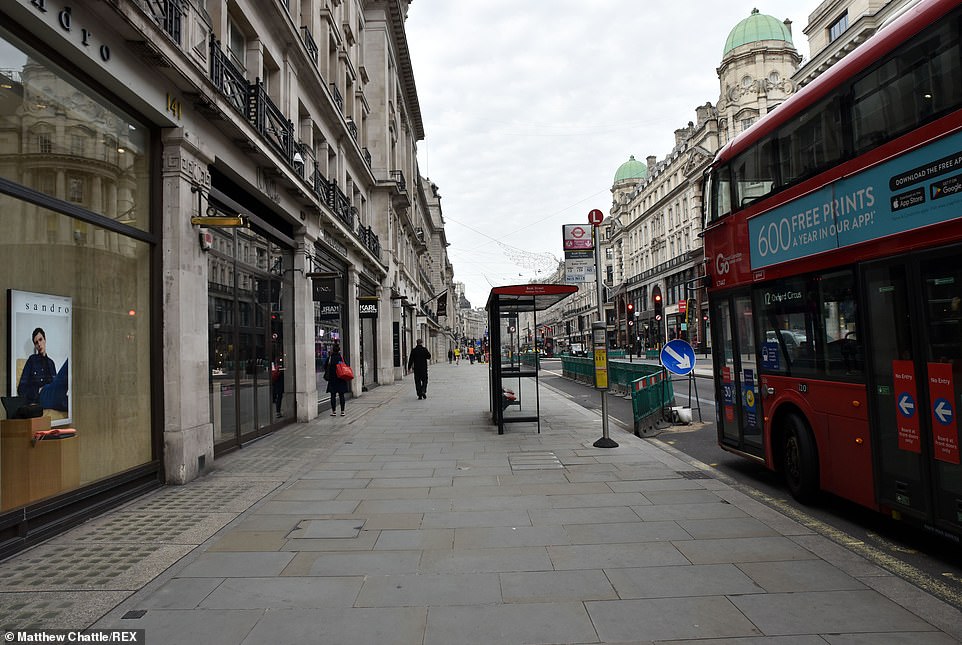 Quiet streets in the West End of London on Friday, with nearly empty pavements and closed stores seen lining the street as England entered its second coronavirus lockdown earlier this week 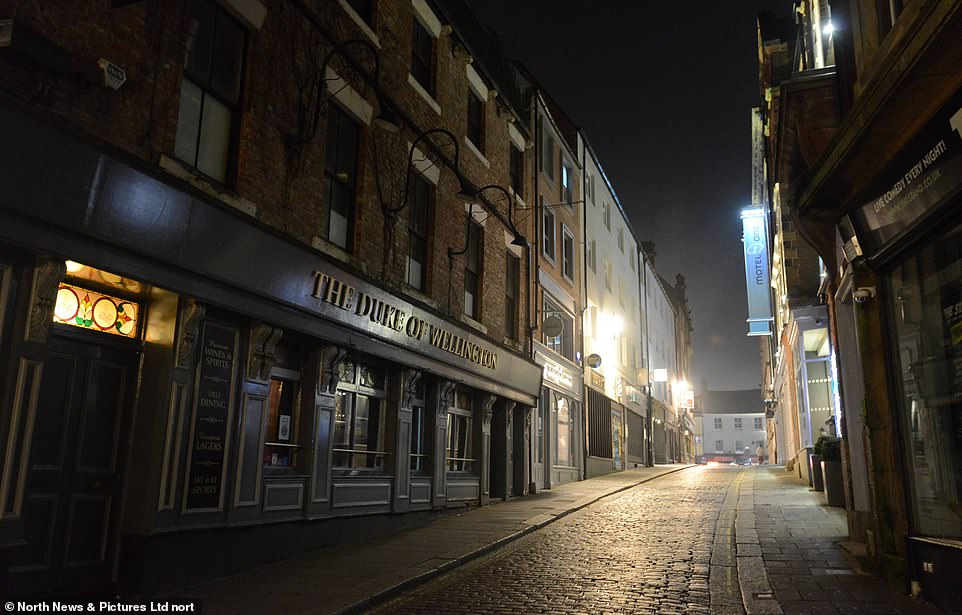 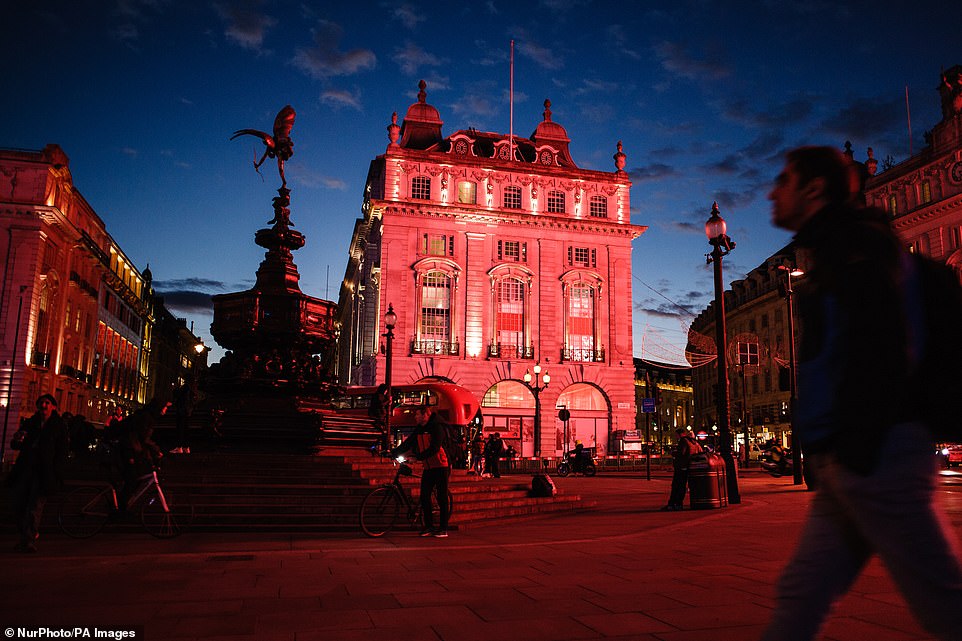 A man walks past the Shaftesbury Memorial Fountain, commonly known as ‘Eros’, in Piccadilly Circus, London, on Friday evening. England began its second Covid-19 lockdown on Thursday, following an announcement from the PM last Saturday 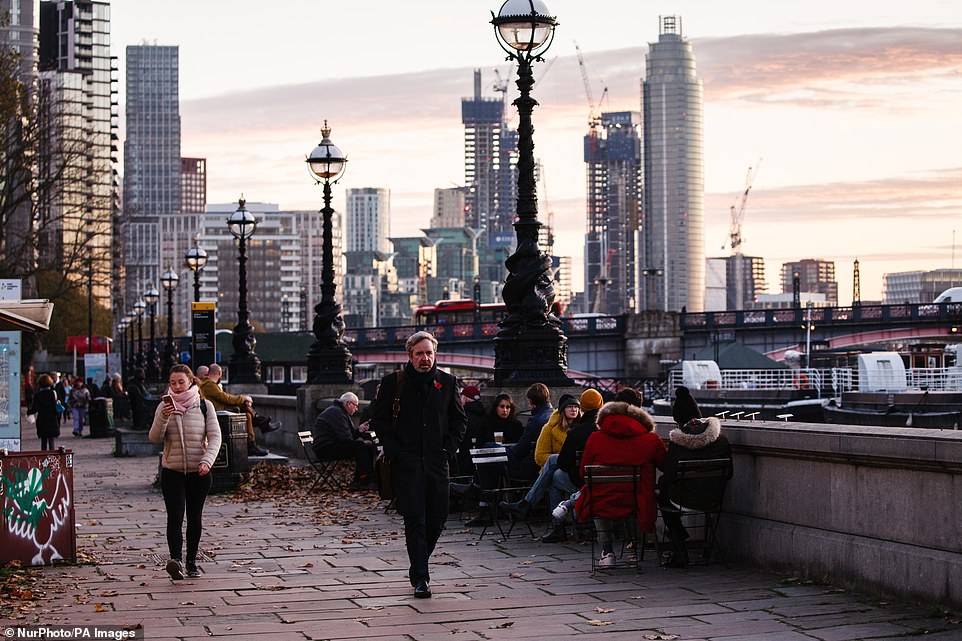 People walk past others sitting at the outdoor tables of a coffee stall beside the River Thames in London yesterday. The images come amid warnings that the country needed ‘dramatic action’ to reduce Covid-19 transmission 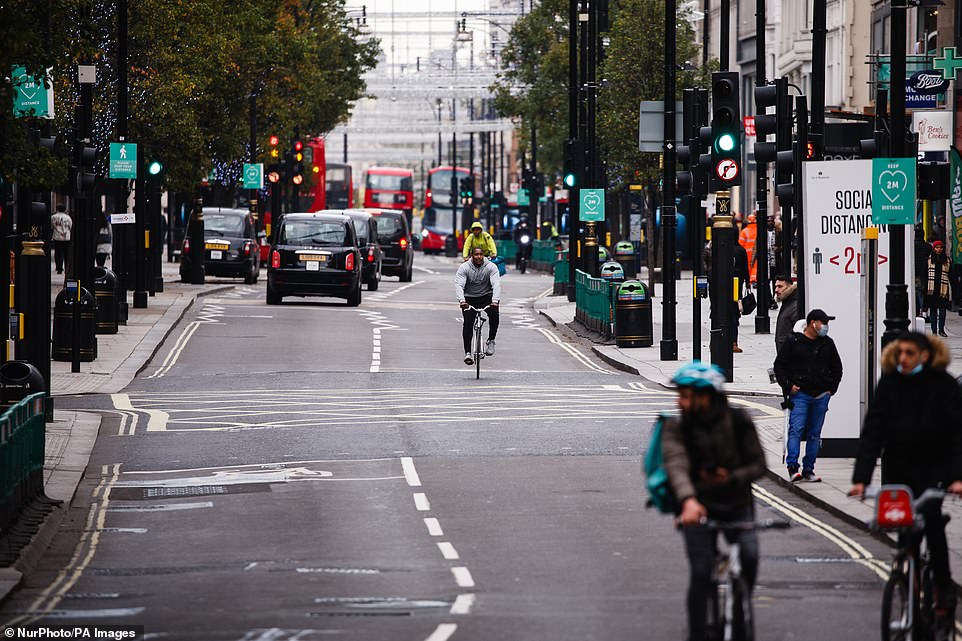 The Government also said it is expanding the self-isolation requirements for Denmark.

British nationals or residents who are returning to the UK either directly or indirectly from the country are now required to self-isolate along with all other members of their household, until two weeks have passed since they were last there.

A further 355 people had died within 28 days of testing positive for Covid-19 as of Friday, according to Government figures.

There were also a further 23,287 lab-confirmed cases of coronavirus in the UK as of 9am.

A total of 64,170 deaths involving Covid-19 have now occurred in the UK, according to figures produced by statistical agencies.