Owners of classic cars have been exploiting a loophole in the technology used by some car parks which can’t identify vintage number plates.

The software used is called automatic number plate recognition (ANPR) and is installed into hi-tech cameras in car parks to recognise when cars arrive and leave so they can be charged accordingly.

ANPR is also used by police to track down potential criminals.

Owners of classic cars have been exploiting a loophole in the technology used by some car parks which can’t identify vintage number plates. Pictured is a modern number plate which is easily identifiable by automatic number plate recognition (ANPR)

Old number plates are usually silver or black and aren’t reflective, meaning that the camera software struggles to detect that a car has driven past at all

Thanks to number plate law reforms in 2015, classic cars made before 1975 are allowed to use vintage number plates – which are much harder to detect using ANPR.

Old number plates are usually silver or black and aren’t reflective, meaning that the camera software struggles to detect that a car has driven past at all.

While the National Police Chiefs Council (NPCC) admitted that vintage number plates are harder to detect using ANPR they claim that classic cars are much less likely to be used in a crime because they are easily detectable in other ways.

The Federation of British Historic Vehicle Clubs told the Telegraph that 20 of its members had recently admitted to using the loophole.

A spokesman said: ‘In the cases of supermarkets you wouldn’t be challenged at all because the system simply wouldn’t recognise you had ever been there’. 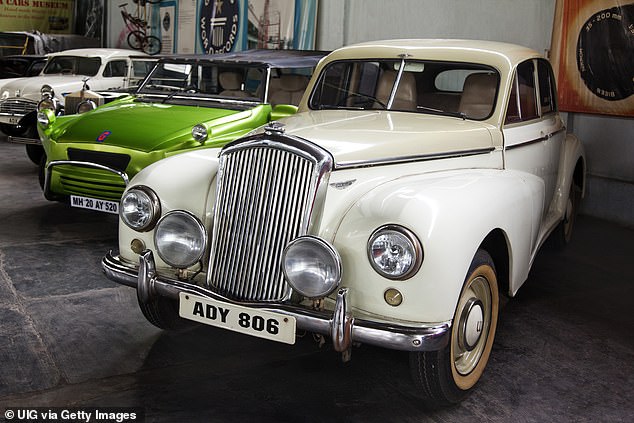 While some classic car drivers reap the benefits of the technology glitch, others have lamented the fact that they get stuck in some car parks which use barriers that are activated by ANPR.

The British Parking Association told the Telegraph said that ANPR was ’99 per cent effective’.

An NPCC spokesperson said: ‘Classic car number plates can be problematic to read by some cameras, this doesn’t mean that they cannot be seen at all, but can result in misinterpretation or a failure to fully capture by some cameras at certain times.

‘Classic cars are rarely involved in criminality and due to their distinctiveness they are easily identifiable by other means.