Schools ‘may be forced to close’: Classrooms could return to remote learning next month amid rising Covid cases, unions warn

Unions have warned that whole schools could return to remote learning in January despite Boris Johnson vowing to keep them open.

The Prime Minister has told Education Secretary Nadhim Zahawi that he is ‘absolutely determined’ to have children back in class and that keeping schools open is the ‘number one priority’, it was reported yesterday.

However, hours later, headteachers’ unions warned that rising Covid cases may force them to close anyway – even without national restrictions – due to staff sickness. 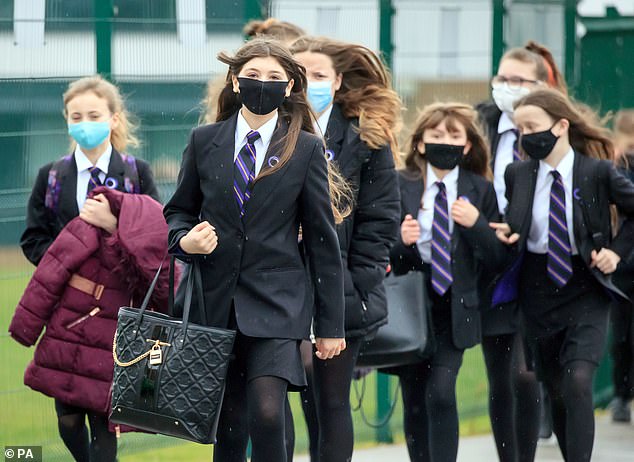 It comes amid fears that Christmas gatherings will hasten the spread of the Omicron variant before the start of term.

Many schools already have contingency plans for remote learning in January and have sent home textbooks and electronic devices just in case.

Mr Johnson and Mr Zahawi are understood to have discussed schools almost daily, with a source telling the Sunday Times: ‘There is a shared commitment across government to make sure they stay open.’

But Geoff Barton, of headteachers’ union ASCL, said yesterday: ‘Schools should be the very last thing that closes in any further restrictions. But words aren’t enough.

‘The Government must back up this aim with material support to minimise transmission of the virus.

‘Otherwise the danger is that there simply won’t be enough staff available to keep schools fully open.’

Paul Whiteman, of the NAHT, added: ‘It does seem as though choppy waters lie ahead and that some form of disruption at the start of next term is looking sadly inevitable… It would be naive to pretend that Omicron won’t have an impact.’

Meanwhile Kevin Courtney, of the National Education Union, called for measures such as wearing masks in classrooms and isolation for close contacts of Covid cases for ‘the best chance of limiting infection rates.’