Speaking to reporters in Paris, Macron and Kishida highlighted challenges including security as areas where they can increase cooperation. The leaders looked to a new round of joint military exercises as well as Japan’s establishment of a consulate in France’s New Caledonia islands, which marks deeper cooperation in the Indo-Pacific region.

“Beyond the war in Ukraine, our two countries have never failed to coordinate closely on major international crises, as well as on non-proliferation issues,” Macron said ahead of a work dinner at the Elysee presidential palace on Monday. 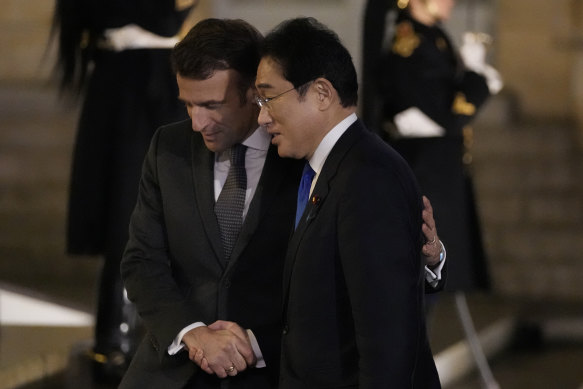 “Japan can count on our unfailing support in the face of Pyongyang’s flagrant violations of international law,” Macron said, adding that Paris and Tokyo “will also continue our joint actions in the Indo-Pacific area”.

France is Kishida’s first stop on a tour that will also take him to Italy, the UK, Canada and the US. Japan seeks to deepen security cooperation with fellow G7 members before hosting the G7 summit in Hiroshima in May. Kishida is also poised to explain his new security policy, which sets the long-pacifist nation on course for its biggest increase in defence spending since the end of World War II.

“France is a leading partner for establishing a free and open Indo-Pacific space,” Kishida said. “From now on, the security of Europe and that of the Indo-Pacific are inseparable.”

He referred to what he called the intensification of “unilateral attempts to change the status quo by force” in areas including the South China Sea, saying Japan wanted to pursue cooperation with France including through joint exercises.

The new strategy, which was approved by Kishida’s cabinet in December, laid out plans for Japan to develop its own hypersonic missiles as part of a radical upgrade of its defence capabilities, from the coast guard to cybersecurity. The shift was mostly triggered by security concerns over China, which is described in the new policy as an “unprecedented strategic challenge.”

Russia’s invasion of Ukraine and North Korea stepping up its missile launches, including one that flew over Japan for the first time in five years, also led to the shift.

While Macron has repeatedly called for engagement with China and resisted efforts to divide the world into competing blocs, he often describes the Asian giant as a “systemic rival” and criticises Beijing’s “hegemonic stance” and human rights abuses.

A senior French official said France was open to discuss new defence industry contracts with Japan if the opportunity arose.

Renault’s talks with Nissan is one of the topics Macron was due to discuss with Kishida after discussions stalled late last year, people familiar with the situation said earlier.