An Air Force pilot desperately tried to escape his ‘enemy’ in a cockpit video of a training exercise.

In a 2019 video, that recently resurfaced online, shows Air Force Pilot William Lewis shooting off swirling flares to distract his ‘enemy’ in a 3k training exercise above the Nevada Test and Training Range on the Nellis Air Force Base.

The skilled pilot can be seen maneuvering through bright blue skies after take off, casually flying over the base’s parking lot before showing a side-by-side shot of his opponent flying parallel to him.

His opponent then veers off to the left, its vapor cone – physical shock waves that create a white cloud of smoke behind aircrafts – lights up orange as it speeds up and drops behind Lewis’ fighter jet. 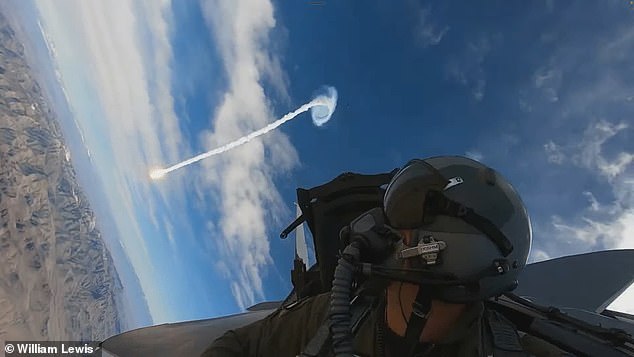 In a recently resurfaced 2019 video, Air Force Pilot William Lewis (pictured looking over his shoulder) can be seen shooting flares at his opponent during a 3k training exercise 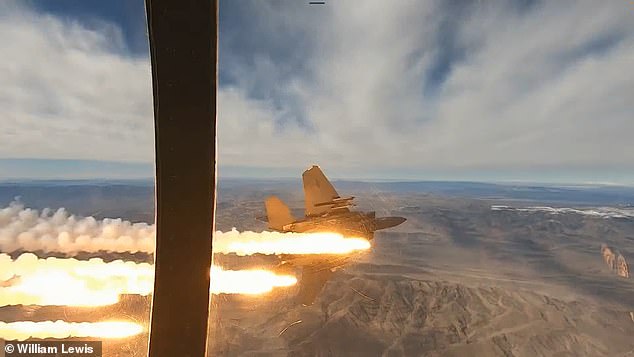 His opponent, seen before training drill began, flew behind him 3,000 feet to start the drill. A 3k fight means a pilot’s opponent is attacking them from 3,000 feet away 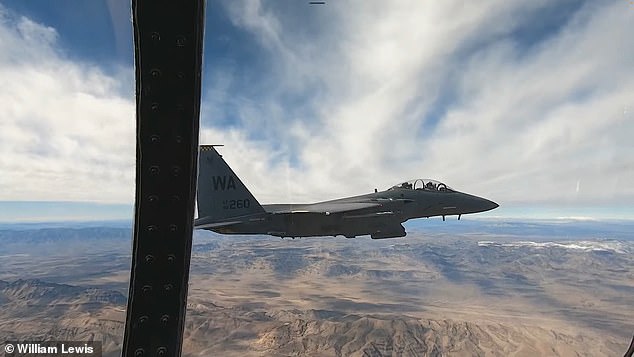 Next, Lewis can be seen drifting the aircraft left and right as he looks over his shoulder for his attacking opponent in the training drill.

At one point, the attacking jet can be seen getting close to the tail end of Lewis’ jet, causing him to send a swirling white flare behind him as he rotates his plane 360 degrees, just as the F-15 fighter jet comes back into view, barely visible.

He can also be seen crossing paths with his enemy, causing the jet to fly right past him.

The pilot can be seen looking through the glass top of the jet, barely looking at where he is going, as he keeps a close eye on the advancing enemy behind him.

Air Force pilots have to learn to always keep their eye on the enemy in an air-to-air battle and have to anticipate what their opponent will do next. This meaning, that unlike an average pilot, who might pay more attention to the skies in front of them and the controls at their hands, Air Force pilots must feel the aircraft and be able to fly the plane without constantly checking the controls. 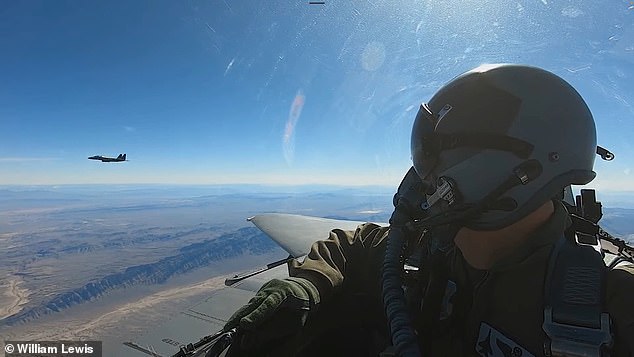 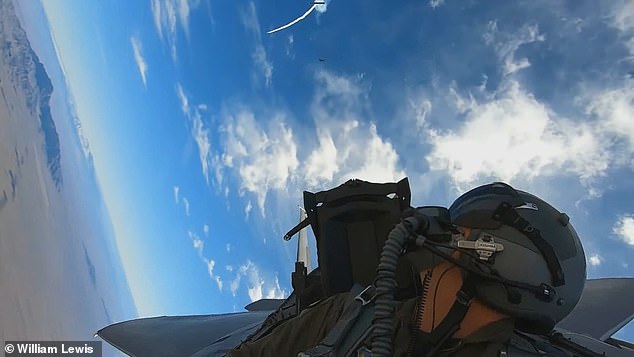 Air Force pilots have to learn to always keep their eye on the enemy in an air-to-air battle and have to anticipate what their opponent will do next. This meaning, that unlike an average pilot, who might pay more attention to the skies in front of them and the controls at their hands, Air Force pilots must feel the aircraft and be able to fly the plane without constantly checking the controls 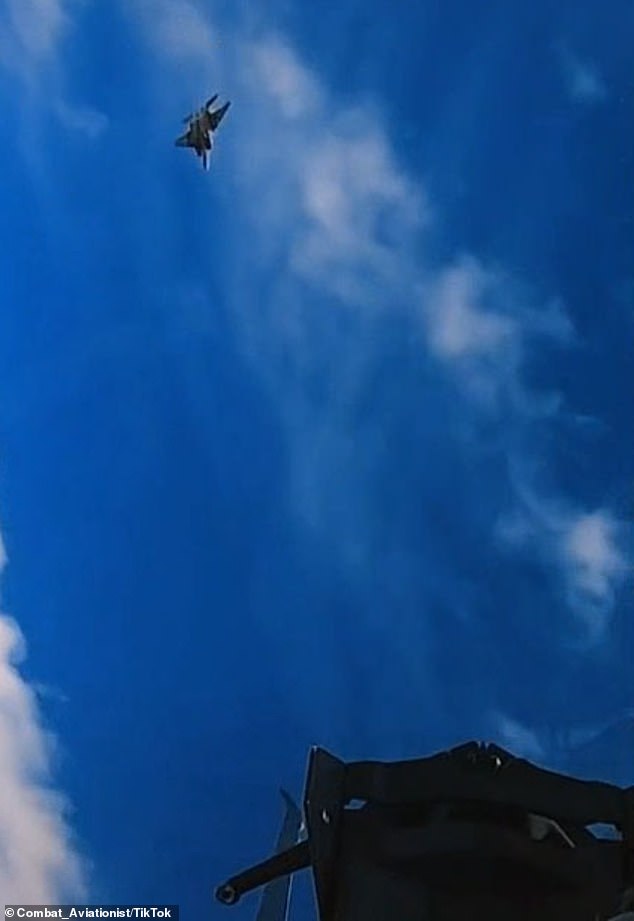 At one point, his opponent flies over top of him as he veered downward to avoid the attack

One Air Force pilot told Task and Purpose that in order to ‘max-perform the Eagle,’ he has to rely on ‘feel and noise’ instead of looking inside the cockpit.

‘[I’m] not looking inside at gauges, that’s a skill versus instrument flying, when you’re eyes-inside,’ Drew Armey told Task and Purpose.

The video shows the pilots performing a 3k training exercise, a basic fight all Air Force pilots learned to maneuver, where their enemy has started to attack them from 3,000 feet away, according to Task and Purpose. Other forms of this exercise and fight can also happen from 6,000 to 9,000 feet and are dubbed 6k and 9k.

‘Anything beyond that really turns into high-aspect [basic flight maneuvers], which we also practice,’ former Air Force Thunderbirds pilot Trevor Aldridge told Task and Purpose. ‘It’s all building blocks to be ready for any type of fight you find yourself in.’

E-15 jets are equipped with missiles, as well as, a gun. Missiles allow for attackers to launch an attack from far away. Lewis was seen several times shooting off flares to throw off advisory signals for heat-seeking missiles. However, flares cannot throw off gunshots, which would be more commonly used in close-range fighting.

The pilot in the video is seen leading the advancing plane, which Armey said the attacking plane has to lead their targets and can’t face directly at the oncoming plane. 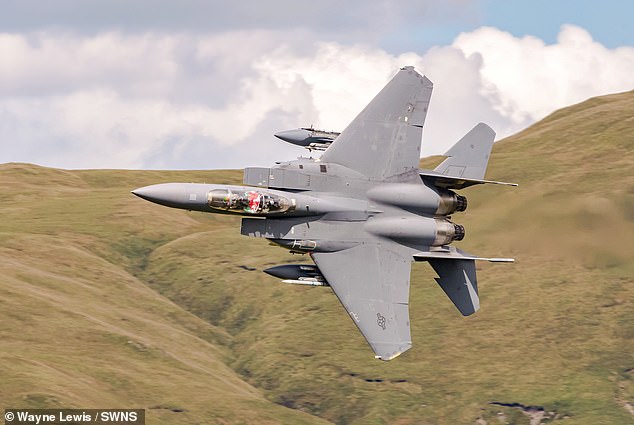 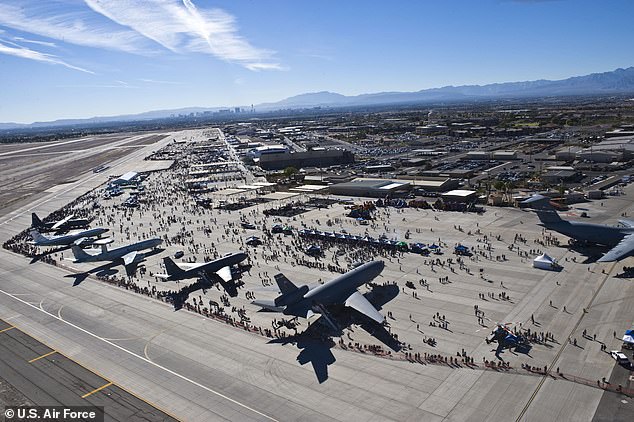 On the other hand, the attacking pilot has to make close calculations, as firing at a fast-moving aircraft while in one is tricky. If the pilot gets close to the jet, it will have an easier time hitting its target with the gun attached to the aircraft. However, it’s a bigger risk to the pilot as the defending aircraft can out-maneuver them and become the attacker, according to Task and Purpose.

‘In a more distant fight, I can keep them too far away, keep them out of gun range,’ Armey told Task and Purpose. ‘If a bandit is close to me, my ability to get away is pretty low, but if they’re being aggressive and make a mistake I can cause that closure to make them overshoot.

In addition, many Air Force pilots debated whether the training exercise was staged to ‘look cool’ or actually show a real demonstration. One pilot said that Lewis would have been dead ‘multiple times’ as the offender ‘settled into a sweet gunshot position for several seconds at a time.’

However, Armey said he wasn’t so sure, but knew one thing for certain: The video was more accurate than the movie Top Gun.

‘I love that movie, but they’re flying way too close to each other, it’s basically formation flying,’ he told Task and Purpose. ‘I get it from a cinematic perspective, because it’s hard to capture what’s going on when the fighters are 6,000 feet away from each other, and even that’s close. This is actual footage of how they’re fighting, so it’s much more representative in that sense.’