An asylum seeker who stabbed an angler to death in a hostel bedroom blamed living at the YMCA for five years as he was jailed for life.

Mr Dalton, a keen fisherman, bled to death after being stabbed to the left thigh.

Bolili, who came from the Democratic Republic of Congo as an asylum seeker, had been living at the hostel for five years.

He denied the charge but was convicted of murder and given a life sentence at the Old Bailey on Friday with a minimum term of 23 years.

Judge Anuja Dhir KC told him he had brought grief and misery to the lives of others. 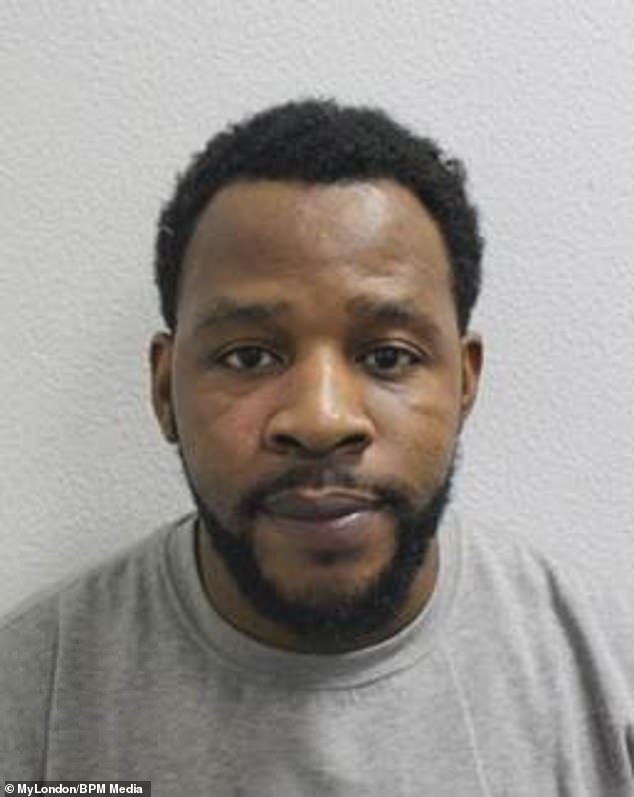 Mongo Bolili, 35, a Congolese asylum seeker who stabbed an angler to death in a hostel bedroom blamed living at the YMCA for five years as he was jailed for life

Bolili, wearing a surgical mask and a grey jumper, wept as the sentence was read out.

The offence took place on shortly before 1am at room 503 in the hostel.

Judge Dhir told the court: ‘You were cross with Paul Dalton and so, armed with a knife you left your room and went looking for him.

‘You found him in his own room where he was relaxing with his friend Phillip Noon and shortly after entering that room you stabbed him twice in the left leg.

‘You punctured both his femoral artery and his femoral bone. Despite the intervention of members of staff and residents of YMCA and the emergency services his life could not be saved. He bled to death.

‘When you left Paul Dalton’s room he was dying and you did nothing to help him. Instead you went to the room of another resident Mr Matu and there you hid the murder weapon.

‘I have no doubt that you did this to avoid being caught.’

Addressing the court on Friday, Mr Dalton’s 16-year-old daughter Shelby Dalton said: ‘When I found out my dad had died my heart shattered and it felt as though I had lost a part of me.

‘Every single day I wake up wishing that this was just a really bad dream.

‘I hate seeing the pain he has caused my family and every time I see them it makes it so much harder.

‘The thought of my Dad being stabbed and in so much pain is unbearable.

‘I couldn’t leave the house for two months, and have only recently been leaving for my GCSE exams, which were very difficult to focus on, and to come to court.

‘Nothing will bring back my dad.’

Her mother Keeley Foster said: ‘The loss of Paul has had a significant impact on my and 16-year-old daughter’s life.

‘Words cannot explain the pain and the hurt that this has caused to me and my family.

‘Every time I look into my daughter’s eyes I see the pain every day and it breaks my heart that there is nothing I can do to bring Paul back.

‘There will forever be an enormous, irreplaceable hole in our hearts.

‘Although we were no longer a couple we were very close. It breaks my heart he’s no longer here and I can’t believe we’ll never see him again.

‘I’ve wondered what I would say if I could look into the defendants eyes. I cannot help but feel anger towards him.

‘My daughter has not been the same since. You have done this to her.’

Judge Dhir said she could not be certain Bolili intended to kill rather than cause serious harm and that the sentence was also mitigated by his PTSD. 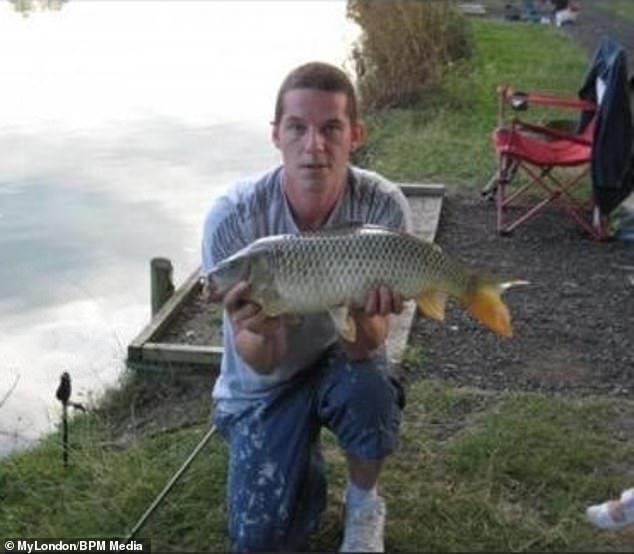 Paul Dalton, 41, was repeatedly knifed at a YMCA hostel on The Broadway, Wimbledon on January 13, 2021

She said: ‘Born in the Congo you witnessed extreme violence and trauma during the civil war, including the violent death of your uncle and grandfather and you yourself were a child soldier.’

Bolili’s defence lawyer Julia Smart said he had come to the UK as an asylum seeker fleeing the war and his experiences had led to his PTSD.

The court also heard that Bolili had been placed in the YMCA in 2015 as temporary accommodation, but he remained there for five years which worsened his condition.

Ian Matu, 28, and Danny Webster, 31, had been accused of concealing the knife used in the killing but they were cleared by the jury of perverting the course of justice.

A police investigation established Bolili as a suspect and he was arrested on January 13, 2021, along with the occupant of room 503, Philip Noon.

Bolili blamed Mr Noon, 55, for the stabbing in his police interview.

But Bolili’s account appeared to be ‘at odds’ with evidence from eyewitnesses and the CCTV.

That evening, Mr Noon had been drinking with Mr Dalton.

Another resident, Nigel Duncan, had borrowed a saucepan from Bolili to cook pasta on the evening of January 12, 2021.

He went downstairs to return it and walked past Mr Noon’s room on the way  — where he spotted him talking to Mr Dalton.

Mr Dalton was sitting on a ‘large fishing seat’ and ‘using [Mr Noon’s] phone to call his own phone which he had apparently mislaid’, said prosecutor Anthony Orchard at trial.

Mr Duncan asked Mr Dalton for some tobacco, but he reacted angrily.

‘It certainly appears Mr Dalton was in a bad mood,’ Mr Orchard said. ‘Mr Dalton stormed out of the room and turned left to walk along the corridor to the lift doors.

‘As Mr Dalton came through the double doors, he kicked them open and he banged on the lift doors.’

He then got into the lift. Shortly after, CCTV shows Mr Duncan passing the cooking pot through Bolili’s door.

Mr Orchard continued: ‘What was actually happening is Mr Dalton was going up in the lift to his own room on the 7th floor.

‘Whilst he was doing that, Mr Duncan had gone into the toilet and heard Bolili open the door and shout “Dalton are you there”.

‘This is the first point that evening when there is some kind of linkage between the defendant, Bolili, and the deceased, Mr Dalton.’

CCTV showed Bolili going up and down the hostel in the lift.

‘The prosecution case is, quite clearly, he is looking for Mr Dalton but they will keep on missing each other for a short period,’ said Mr Orchard.

‘He looked around the YMCA, walked upstairs to the 7th floor and is now knocking on Mr Dalton’s room.’

There was no answer, so Bolili continued on his search.

‘He goes through the double doors. He reaches Mr Noon’s room — room 503.

‘Bolili was inside the room for one minute 35 seconds.’

During this time, he stabbed Mr Dalton with large hunting knife.

Webster and Matu were said to have stuffed the knife into the air vent above a toilet cubicle at the charity hostel but they were cleared of perverting the course of justice.

Bolili denied the charge but was convicted of murder.

He was sentenced to life imprisonment with a minimum term of 23 years.

Detective Chief Inspector Jim Shirley, who led the investigation, said: ‘Paul was unarmed and, despite a verbal row, did not pose any physical harm to Bolili. The attack on him was utterly unnecessary.

‘Bolili claimed Paul’s friend had stabbed him, but there was no evidence at all to support this.

‘My team of officers worked fast and incredibly hard for Paul and I thank them for their diligence and dedication. I hope Paul’s family can derive some comfort that we have done everything we possibly could to bring them justice.’