There have now been more than 250,000 deaths of people with coronavirus around the world, according to a tally.

In figures compiled by Johns Hopkins University in the US, there have also been more than 3.6 million confirmed global cases of the virus.

The tally shows the US as the worst-affected country, in terms of deaths, with close to 69,000 people having died with coronavirus.

And New York is by far the worst-affected US state with almost 25,000 deaths, the university said.

The Treasury Department plans to borrow almost $3trn from April to the end of June to cover the US government’s response to the coronavirus crisis. 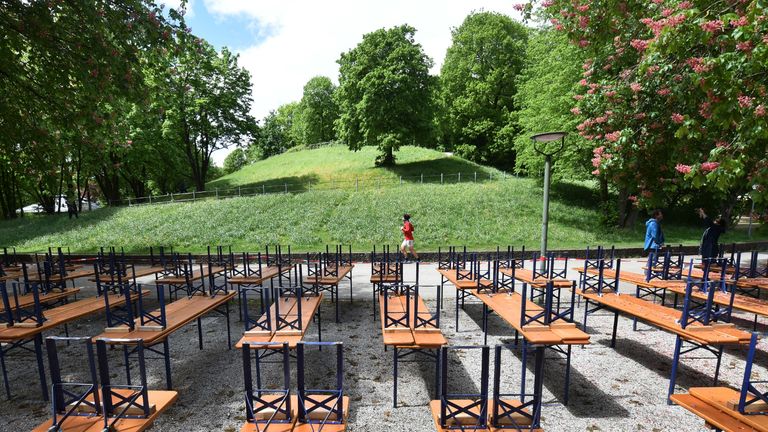 Italy, the UK, Spain and France have each suffered between 25,000 to 30,000 COVID-19 deaths, according to the Johns Hopkins tally.

It comes as many countries around the world continue to lift lockdown measures, after judging they have passed through the peak of coronavirus infections.

In Germany, several states have set out plans to reopen restaurants and hotels in the coming weeks.

Bavaria, the country’s second-most populous state, on Tuesday said beer gardens would open on 18 May with restaurants opening a week later, albeit with limited numbers of customers, limited opening times and strict hygiene rules.

From 30 May, hotels in the southeastern state – which has had the highest per capita coronavirus infection rate in Germany – will be able to welcome tourists, but won’t be able to open their saunas or swimming pools.

Fellow states Lower Saxony and Mecklenburg-Western Pomerania have already set out their plans to lift lockdown measures later this month.

Lothar Wieler, head of Germany’s national disease control centre, said there is “great certainty” there will be a second wave of coronavirus infections in the country, along with a possible third wave, but that it is prepared to deal with it.

In Norway, churches will be allowed to carry out ceremonies again from 10 May, as long as there is a maximum of 50 people with at least one metre between them.

In neighbouring Sweden, researchers at the KTH Royal Institute of Technology found large concentrations of coronavirus in Stockholm’s sewage system.

It has been said analysis of waste water plants could predict any second wave of coronavirus infections.

There are no known cases of infection spreading through waste water or drinking water.