The City of Melbourne has approved the demolition of the historic Jack Dyer Stand at Punt Road Oval as part of a redevelopment of the ground by the Richmond Tigers AFL club.

The council will recommend to Planning Minister Richard Wynne that the $65 million redevelopment of the oval go ahead. 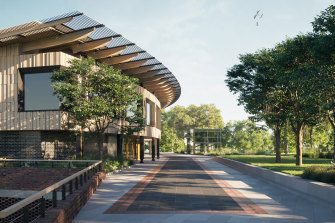 An architect’s drawing of the proposed redevelopment of Punt Road Oval, which would involve the demolition of the historic Jack Dyer Stand.

Richmond had vowed to leave Punt Road if its plans to demolish the stand, which was built in 1915, and redevelop the ground were not approved.

At the council’s Future Melbourne Committee Meeting on Tuesday night, Laura Thomas, director at Urbis and town planner for the Richmond Football Club, said the redevelopment required the demolition of the historic stand.

Thomas said the decision was not taken lightly, but the stand was not fit for modern purposes.

She said the club’s primary aim was to secure its long-term future at Punt Road Oval, with the redevelopment to double the oval’s capacity from 4000 to 8000 spectators.

Heritage groups are opposed to the demolition of the 107-year-old stand which was renamed in 1998 after the Richmond legend known as “Captain Blood”.

Richmond has pledges of $30 million from the state and federal governments for the planned redevelopment, which will include a revamp of facilities for women’s football and space for the club’s Indigenous Transition School and Korin Gamadji Institute (Indigenous learning centre) and for the Bachar Houli Foundation.