A couple say they face Christmas with ‘no home and no hope’ after their flat flooded with sewage for the second time in less than two years due to a burst pipe.

Frances Spanner, 29, and Tony King, 35, woke to the flood in the early hours of November 17 and in two hours the couple said they watched 16 months of renovation work from the previous incident wash away.

Shocking footage shows Frances wading through the flat in Herne Bay, Kent, submerged in a foot of water, with one of her three cats seen hiding on one of the counters. She can be heard saying to Tony: ‘You have no shoes, your brand new trainers we only bought last weekend are submerged in water at the moment.’

Hand-made Christmas presents for friends and family are now ‘bobbing up and down’ in sewage water in the uninhabitable building, where the walls reportedly now measure at 100 percent damp.

The couple say they are facing homelessness and will have to replace thousands of pounds worth of destroyed or damaged items. 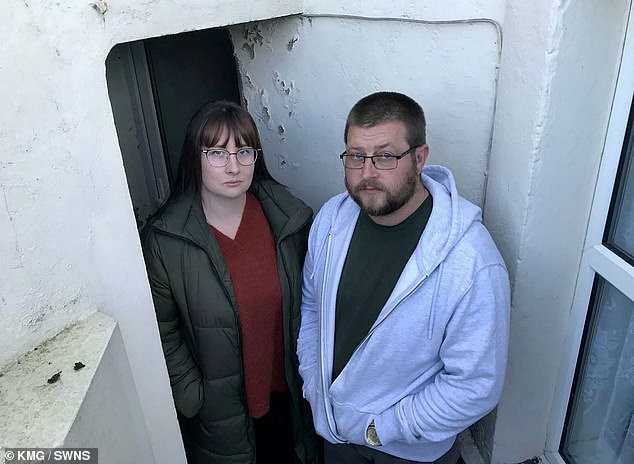 Southern Water stumped up for the couple to live in an Airbnb after their pipes burst but the water company have allegedly told them on January 2 they will have to go it alone and pay accommodation costs themselves.

The company blamed the flood on a ‘hydraulic overload’ due to heavy rainfall.

As a result they gave the Kent couple a £5,000 ‘goodwill payment,’ offered to Southern Water’s worst-affected customers.

However, Frances and Tony say that will not touch the sides of the family’s bill as when their flat flooded in August 2021 it racked up to over £10,000.

Now their new kitchen will reportedly need to be ripped up and refurbished and the bathroom and tiled flooring across the flat will have to be redone.

That’s before their furniture, clothing, and other belongings are replaced.

The landlord is reportedly having to go through their own insurance to cover the cost of the work to make the flat liveable again.

‘We know we can get through this, we’ve done it before and we’ll do it again,’ Frances said.

‘But right now, it really does feel like we have no home, no Christmas and no hope.’ 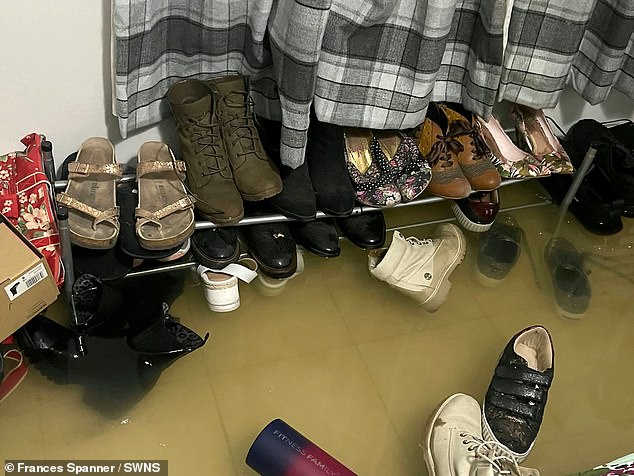 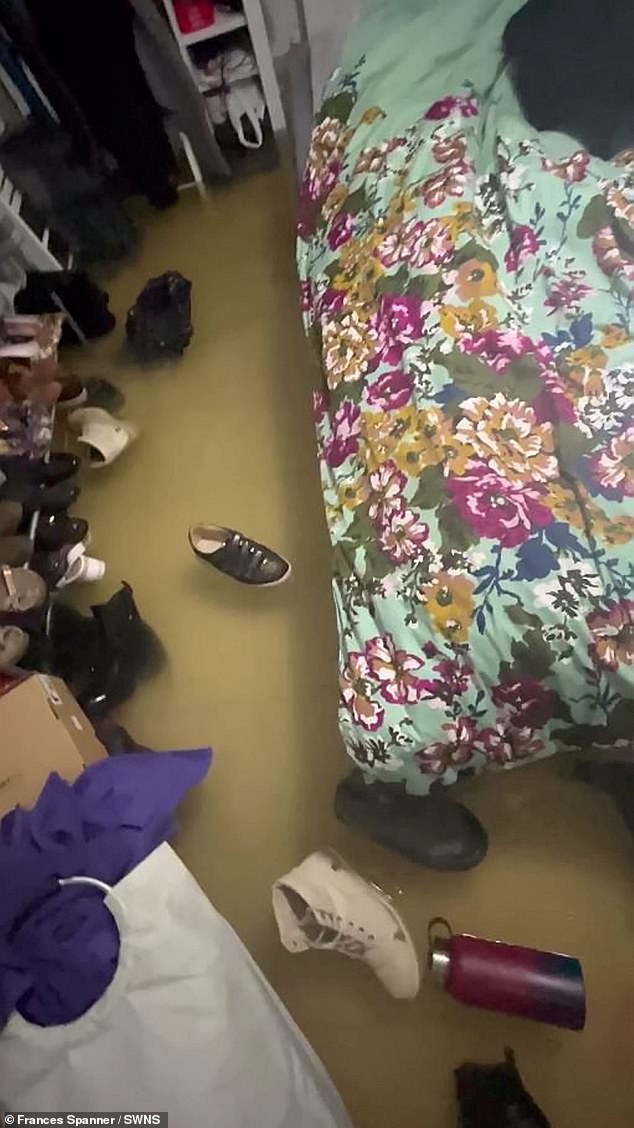 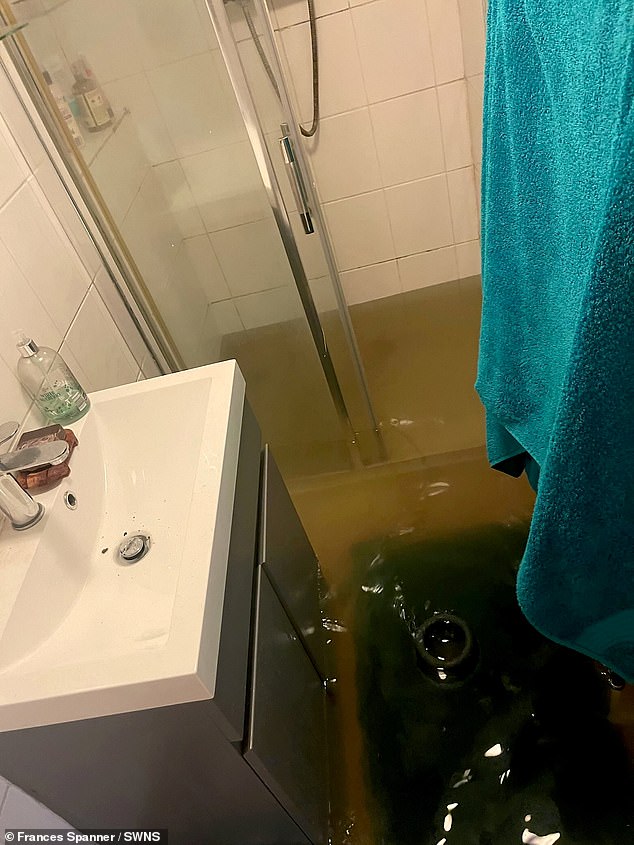 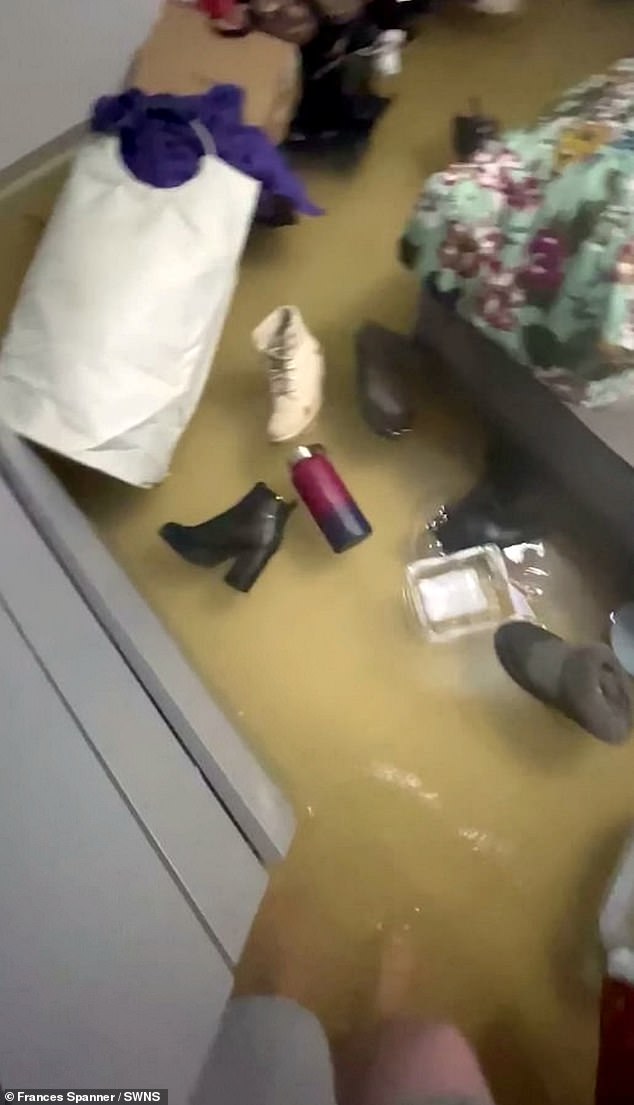 In the meantime they have been bumped from hotel to hotel, from November 16 they stayed at a Premier Inn, then were moved to another Premier Inn, and now they are in their second Airbnb.

Because the property is now so high-risk the family are unable to get contents insurance.

Frances said 21 or 22 properties in the area were affected by Southern Water’s burst pipes.

Some households need carpets replacing, which the £5,000 payment would generously cover, but she said others need much more financial aid.

Their neighbours, ice cream company Scoops, had their property destroyed to the same degree as Frances and Tony’s.

The soon-to-be-wed couple live with three cats, but because Airbnbs don’t allow pets they have had to leave them in the property and go back to check on them.

Explaining the situation, Frances, a dispatch clerk, said: ‘Rather than getting to watch our family and friends unwrap their presents on Christmas Day, we got to watch them bob up and down in sewage water in the middle of November.

‘And now, our Christmas will be spent in an Airbnb trying to find somewhere to live beyond January 2, when Southern Water stop paying for our accommodation.

‘And what makes it worse is that a lot of the gifts we give out are hand-made, so a lot of hard work and effort went into them just to chuck them away.

‘In the space of two hours, we saw the work of the past 16 months literally be washed away again.’

The family say they have nowhere else to go. 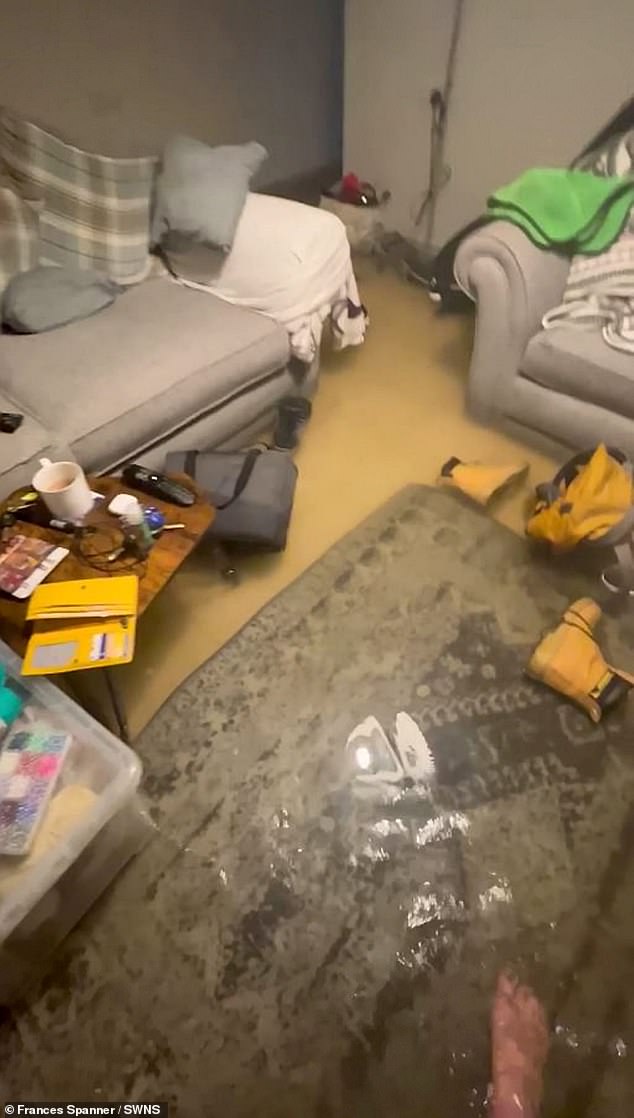 Their living room – Frances, 29, wading through the flat in Herne Bay, Kent 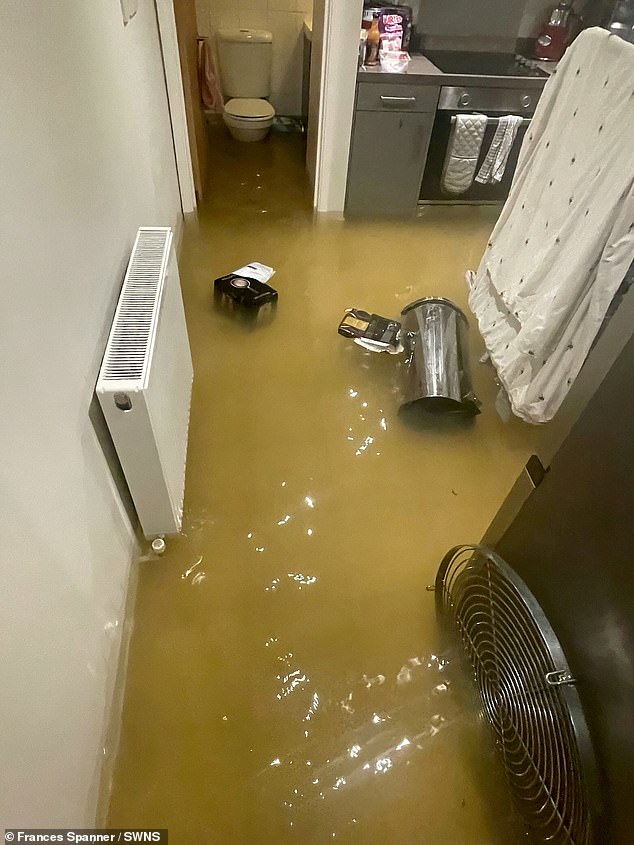 ‘My mother’s just had major surgery up in Glasgow. We can’t go up there because we have three cats that are having to live in the flat while we bounce around from place to place.

‘The hotels and Airbnbs don’t allow pets, so we have to go back at least twice a day to check on them.

‘It’s so disheartening to go in and see the state it’s in. It doesn’t get any easier. There’s such a long road ahead before it is suitable to live in again.

‘It’s so much more than just about losing material objects – it’s the strain it puts on our lives, our relationships, our mental well-being.

‘We’re now in our second Airbnb, and we’ve been told this is the last time they can put us up somewhere, so when January 2 rolls around we don’t have a clue where we’ll go.

‘Essentially, the whole place needs to be renovated and redecorated including replacing furniture and clothing.

‘The brand new kitchen needs to be ripped out and refurbished, the bathroom needs to be done again, the tiled flooring which spans the entirety of our flat has to come up too.

‘The walls are measuring up at 100 per cent damp, so no doubt they’ll have to be sorted as well.

‘It’s a complete nightmare, and that’s before you even begin to consider the loss of our personal belongings.’

A Southern Water spokesperson said: ‘We understand how distressing flooding can be and always seek to help our customers.

‘On November 16-17 Herne Bay was hit with between 40 and 50mm of rain in 48 hours which overwhelmed all drainage systems.

‘We arranged temporary accommodation for the worst affected customers while our clean up teams made properties habitable and ensured electrics were safe.

‘While no compensation is payable as the flooding was caused by severe rainfall, because of the impact we are offering goodwill payments of £5,000 to those who suffered damage and disruption to help with their recovery.

‘As one of the agencies with responsibilities around flooding, we work closely with council departments, the Environment Agency and others to mitigate flood risks and help with the impact.’

The family’s anger is not solely directed towards Southern Water.

Lorry driver Tony blames the Kent-wide issue of over-building, adding: ‘Where does the buck stop? The various councils continue to sign off on houses where the infrastructure cannot sustain the current demand.

‘It’s a vicious circle, but it’s highly frustrating when the people are the ones who pay the prices.

‘How many times do we have to see people suffer for no good reason before the higher-ups realise that it can’t go on the way it is, not without massive funding to help utilities cope.’