It is often suggested that courage is the foundational virtue because without it the other virtues can hardly get started. And of all its many forms, the most important is moral courage, which can change the world, from Moses before Pharaoh to Martin Luther King.

Thomas More is often upheld as an example of moral courage – he was resolute to death in defying Henry VIII’s Protestant reforms and in upholding his Catholic faith. Of course it helps to have a biographer like Robert Bolt, whose famous play A Man for All Seasons casts him in a beautifully roseate glow. 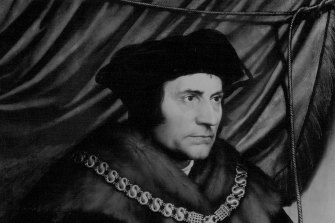 Sir Thomas More was unwilling to extend to others the freedom of conscience he so valued for himself.

And More certainly had courage, esteeming his religious conscience above his political role as Henry’s chief adviser and even his life. In 2000, Pope John Paul II made More the patron saint of politicians – a class of people traditionally more flexible than More.

But the freedom of conscience he so valued for himself he was unwilling to extend to others. I cannot forget his vicious persecution of Protestants, gloating at the cruel deaths of those he sent to the stake, and particularly his relentless pursuit of a man who truly was a colossal hero of the faith, William Tyndale, whose life’s mission was to translate the Bible into English.

In More’s authoritarian eyes, no heresy could be greater than allowing ordinary people to read the Bible for themselves. More called Tyndale “a hell-hound in the kennel of the devil”. Tyndale biographer Brian Moynahan says More’s hatred “unhinged him”.

Lord Chancellor of England by day, More devoted his nights to penning half a million poisonous words attacking his great enemy. He celebrated the burning of Tyndale’s fellow evangelicals with rapture. Sixteenth century invective makes our own age seem positively genteel.

Tyndale had to flee for his life time and again, from England and from various European cities where he did his translating. His safety was not improved when (like More) he opposed in print Henry’s divorce from Catherine, thus acquiring another vindictive enemy.

Executed in Belgium in 1536, his dying prayer was that the King of England’s eyes would be opened; soon after, Henry authorised the Matthew Bible in English (largely Tyndale’s translation) with the English Reformation now under way.

Tyndale’s work was one of the most important factors in the Reformation in England. It is estimated that the 1611 King James Bible – unquestionably the most influential book in English – draws 83 per cent of its New Testament translation directly from Tyndale and 76 per cent of the Old Testament.

The courage and determination Tyndale showed throughout his life, heedless of hatred and vilification, are not unique. But, for me, they are a beacon to the beauty, power and perseverance faith can bring to people’s lives.

Barney Zwartz is a Senior Fellow of the Centre for Public Christianity.