An anti-lockdown protester who argued Victoria’s COVID-19 stay-at-home laws limit political speech has failed in her challenge in the Supreme Court.

Kerry Cotterill received an infringement notice for holding a sign that had a hand-drawn image of Premier Daniel Andrews under the words “Toot to boot” while she wore a mask carrying the words “Ban Dan” on September 13 last year. 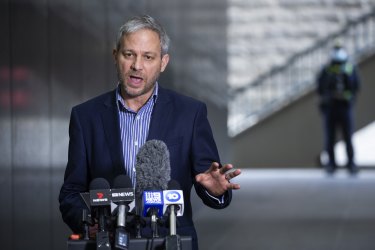 The infringement notice was later withdrawn but Ms Cotterill took two of the state’s most senior health leaders, Chief Health Officer Brett Sutton and Deputy Public Health Commander Finn Romanes, to court and argued she should be entitled to protest if within five kilometres of her Melbourne home and while outside exercising.

Ms Cotterill’s lawyers argued she was combining exercise with her right to political communication.

But Supreme Court judge Justice Richard Niall on Tuesday rejected the challenge and dismissed the case.

Justice Niall found while Ms Cotterill was entitled to seek vindication of her actions, the lockdown laws were designed to restrict people’s movement by reducing the reasons for leaving their homes. 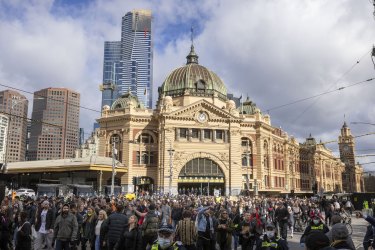 Anti-lockdown and anti-vaccine protesters in Melbourne on July 24. Credit:Wayne Taylor

“It would undermine the protective purpose of the stay-at-home rule if a person could leave their residence for any reason provided it was combined with a permitted reason,” he wrote in his judgment.

Lawyers for the health leaders argued the powers under the Public Health and Wellbeing Act were valid, even if they legitimately restricted political communication, as they were exercised during a state of emergency and aimed at trying to eliminate or reduce the serious risk to public health.

Justice Niall said he was not convinced by Ms Cotterill’s argument to allow either a “dual purpose” of combining exercise and protest, or to demonstrate or engage in political communication.

The Supreme Court has previously ruled the curfew in place during last year’s second wave in Victoria was legal, after business owner Michelle Loielo – also an aspiring Liberal MP – claimed the measure was unreasonable.

A curfew was reintroduced on Tuesday.

The Andrews government faces more legal challenges over its pandemic response, including class actions brought by affected businesses and workers, and those affected by the hotel quarantine system.