Under the new restrictions, restaurants and gastro pubs will be forced to close at 3pm on 24 December.

Non-essential shops are allowed to stay open, along with gyms, leisure centres and swimming pools, providing they do not host any January sales.

Travel to and from Ireland will also be prohibited after Boxing Day.

The rules around Christmas remain the same, allowing three households to mix indoors until 26 December, with visits from one other household permitted until 31 December.

But people will be banned from mixing with other households indoors and in private gardens from 1 January.

The new restrictions will last until 12 January, Mr Martin told a news briefing on Tuesday.

Follow live COVID updates from the UK and across the world 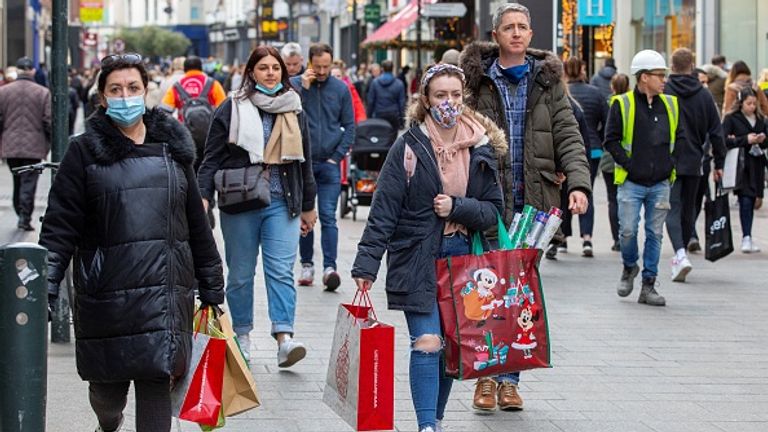 While Ireland has managed to keep its coronavirus death toll relatively low compared to the rest of Europe, the virus is now growing by around 10% every day, he said.

“We do not yet have evidence that the new, more virulent strain of the virus is in our country, but the rate of growth over the last week tells me that the safest, most responsible thing to do is to proceed on the assumption that it is already here,” he told the briefing.

The new restrictions – Level 5 of Ireland’s ‘living with COVID’ plan – were decided this morning, in a “quick and aggressive” response to the leap in infection rates.

Mr Martin said he is implementing them with a “heavy heart”, but added: “It is important to remember the hope is real. There is light at the end of this tunnel.”

Ireland will soon receive 10,000 doses of COVID-19 vaccines and will start rolling them out to the population’s most vulnerable next week, he told the news briefing.

“Vaccinating millions of people will take time, and in the meantime, we have to be vigilant,” he added.

Other changes to restrictions include hotels being allowed to stay open for essential and non-tourism purposes and to those who are due to check in up to 25 December.

Schools will remain open, elite sports can continue without spectators and amateur, non-contact physical activity can carry on in groups of up to 15 outdoors – as before.

Religious services will go ahead as planned until Christmas Day, after which they will go back online – apart from for individual worship.