Dr. Anthony Fauci will be among the officials who are scheduled to testify about the government’s response, a day after the U.S. death toll surpassed 200,000.

Plastic face shields do little to reduce the spread of the virus, research suggests. 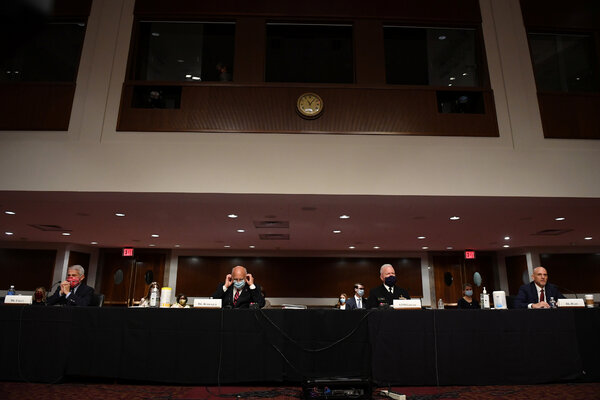 With the independence of public health agencies under scrutiny, U.S. virus experts will testify in the Senate.

Four of the top doctors leading the government’s coronavirus response are scheduled to testify in the Senate on Wednesday amid growing questions about the Trump administration’s efforts to bend scientific decision-making to the president’s advantage.

With the number of coronavirus deaths in the United States having surpassed 200,000 on Tuesday, the Senate will get a report on the state of the government’s response from Dr. Anthony S. Fauci, the government’s leading infectious disease expert; Dr. Robert R. Redfield, the director of the Centers for Disease Control and Prevention; Dr. Stephen M. Hahn, the commissioner of the Food and Drug Administration; and Adm. Brett P. Giroir, the testing czar.

Looming over the hearing will be the threat of a public scolding by President Trump if he hears testimony he doesn’t like. Last week the president rebuked Dr. Redfield after he told a Senate committee that a vaccine would not be widely available until the middle of next year and that masks were so vital in fighting the disease caused by the coronavirus, Covid-19, that they may be even more important than a vaccine.

The Wednesday hearing before the Senate Health, Education, Labor and Pensions Committee follows upheaval within the federal Department of Heath and Human Services, whose top spokesman, Michael R. Caputo, took medical leave last week after delivering an outlandish rant on Facebook Live in which he accused C.D.C. scientists of sedition, promoted conspiracy theories and warned of armed revolt.

The Facebook appearance came after the revelation that Mr. Caputo’s science adviser, Dr. Paul Alexander, had tried to pressure the agency to revise or delay its weekly scientific reports. Dr. Alexander has since left the department. Democrats will almost certainly use the hearing to question Dr. Redfield about those events.

Dr. Redfield will likely also face questions about guidelines for testing issued last month that suggested certain people exposed to the virus did not need to be screened. Internal documents show the guidance had been posted on the C.D.C.’s website despite serious objections from agency scientists, and the agency reversed it last week.

Lawmakers are likely to question Dr. Hahn about the F.D.A.’s plan to issue stricter guidelines for the emergency authorization of any new coronavirus vaccine, which would add a new layer of caution to the vetting process as Mr. Trump has insisted a vaccine will be ready as early as next month. The guidelines may be formally released as early as this week if approved by the White House, and would recommend that clinical trial data be vetted by a committee of independent experts before the F.D.A. takes action, according to several people familiar with the draft.

On Tuesday, Dr. Fauci said he worried about the country entering the cooler months without having a handle on the virus. The United States is seeing an average of about 40,000 new cases a day based on a seven-day average, according to a New York Times database.

“Those are the things that I get concerned about as we get into October and November and December,” Dr. Fauci said Tuesday on CNN. “I’d like to see us go into that at such a low level that when you have the inevitable cases you can handle them.”