A nurse who does COVID-19 testing says she should be exempt from allowing in-person inspections at her rental because of the health risk.

Paula Lambert, who has been working across several of Melbourne’s drive-through testing sites, rents a house in the bayside suburb of Carrum in the city’s south-east that her landlord is trying to sell. 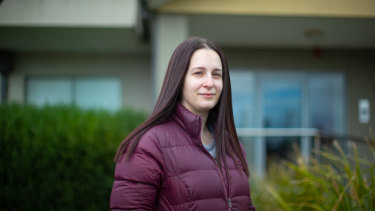 The selling part is not what the 31-year-old, whose lease is up in January, has a problem with – it’s having strangers in her home.

“I can’t guarantee the way people are conducting themselves in my house – that they’re not touching things, that they’re wearing their masks appropriately," Ms Lambert said.

“My health and safety is at risk in my own house when it’s the one place that I should feel safe.”

Restrictions in Victoria have eased to allow for in-person inspections. Under the rules, only 15 minutes are allowed for appointments that are limited to one agent and one prospective purchaser or tenant and another member of their household.

Real Estate Institute of Victoria president Leah Calnan said the majority of disputes in the pandemic have been over rental payments and evictions, of which a moratorium was still in place, but in-person inspections are becoming more of an issue.

“Whilst there were some transactions and sales that took place during the stage four lockdown, that did allow virtual inspections to take place, now the state’s opening back up people want to view in person,” Ms Calnan said.

“They’re not going to outlay hundreds of thousands of dollars on a virtual inspection.”

Consumer Affairs Victoria, which set up the Residential Dispute Resolution Scheme in April, has fielded calls from more than 55,000 tenants, landlords and agents during the pandemic and, as of last month, a spokesperson said they've resolved about 14,000 disputes.

Victorian Civil and Administrative Tribunal figures show there were 21,260 tenancy disputes between March and September, or about 115 a week on average.

Tenants Victoria chief executive Jennifer Beveridge said their legal advice lines continued to be in high demand, including from renters who are still being issued notices to vacate in the moratorium.

"We have seen concerning behaviours from some agents and landlords in refusing genuine requests for rent reductions in the first place, resulting sometimes in delayed outcomes," Ms Beveridge said.

"Tenants have shared many stories of agents being very slow in responding to requests or refusing to consider the special circumstances. Agents and landlords in some cases have only offered a deferral of the full rent, which means debt accumulates for the tenant already in financial hardship."

Ms Calnan, a property manager, said there's been stress on landlords too and she has clients who have had properties vacant for months.

"It's an easy comment to make – they're an investor, they took the risk – but it's not as easy as that. They still have costs and expenses and mortgages they need to put on hold, just like everyone else," she said.

Ms Lambert, who also works as a critical care nurse across three major hospitals, took her landlord and real estate agent to VCAT to prevent in-person inspections from occurring, arguing virtual inspections would be sufficient as she comes to the end of her lease.

Her legal representatives at Gordon Legal said Ms Lambert had to prove why she should be exempt, confident that being employed as a frontline healthcare worker at tests sites would constitute ‘exceptional circumstances’ under the Residential Tenancies Act.

But VCAT and the real estate agent disagreed, and she’s now required to accommodate inspections.

“I’ve got three months left (on my lease), that’s all I’m asking for.”