Covid’s comeback continues as daily cases hit 98,000, hospital admissions climb 11% and infections rise in EVERY authority in England — as scientists start calling for ‘people to isolate with cold symptoms’ AGAIN

The UK’s Covid outbreak continued to grow today as official data showed daily cases and hospital admissions jumped by more than 10 per cent in a week and infection rates increased in all of England’s local authorities.

Hospitalisations are already at their highest ever level in Scotland and rising quickly in England, which combined with the growing infections has led some scientists to call for some people to isolate if they have cold-like symptoms.

Government dashboard data showed another 98,204 infections were logged in the last 24 hours, up by 9.5 per cent in a week and more than a third higher than a fortnight ago.

Cases have been trending upwards across the UK for nearly a month, with experts blaming the more transmissible Omicron subvariant BA.2, which is now dominant, and the easing of Covid curbs.

Meanwhile, 165 Britons died within 28 days of a positive test, climbing by a fifth in a the last seven days.

And 1,979 infected people were admitted to hospital on Sunday, 11 per cent higher than last week.

It comes as separate data from the UK Health Security Agency (UKHSA) today showed Covid cases jumped in all of England’s 149 local authorities in the week to March 20 for the third week in a row.

The figures show the worst-hit areas are concentrated in the South West, with around 1.5 per cent of people testing positive in North Somerset, Cornwall and Isles of Scilly and Torbay.

Meanwhile, the number of Covid patients in hospitals across Scotland today hit 2,322, a record high figure for the fourth day in a row and 14 per cent more than last Thursday.

And virus admissions among the over-75s in England have jumped to the highest level seen since mid-January 2021, before vaccines had blunted the impact of last winter’s wave.

Health chiefs today warned that hospitalisations will continue to climb and urged Britons to wear face masks, socialise outdoors and isolate if they have symptoms or test positive in a bid to quell the spread of the virus.

And epidemiologist Professor Tim Spector today urged anyone with cold-like symptoms to self-isolate.

It comes less than a month after the legal requirement to self-isolate came to an end in England. But guidance is still in place that advises infected people to stay at home and avoid contact with others. 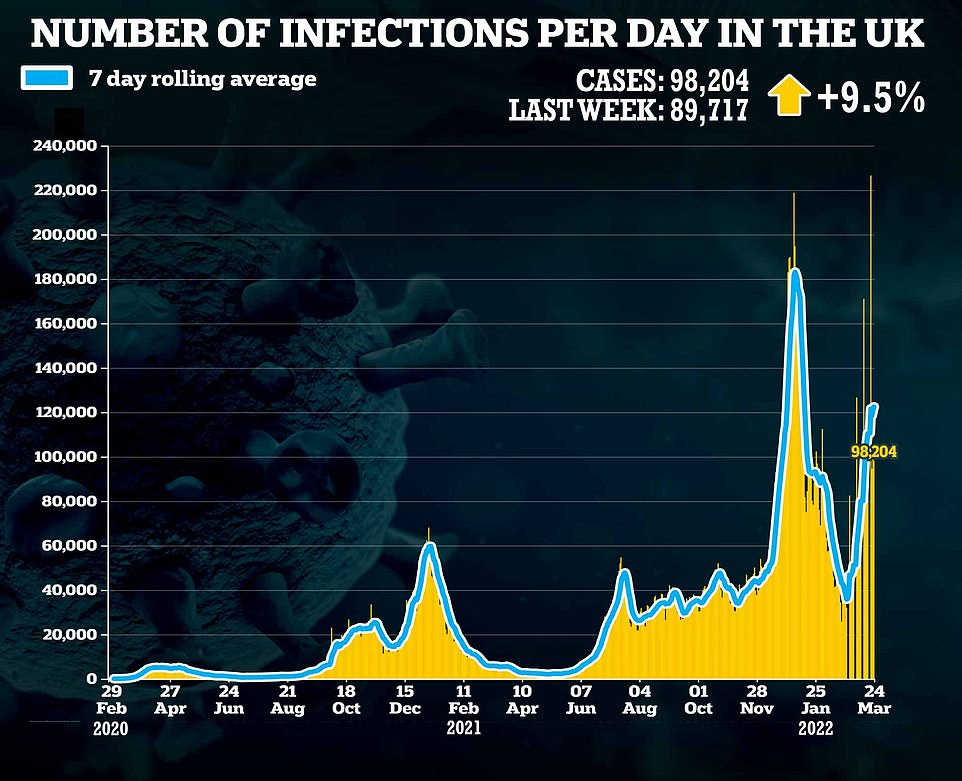 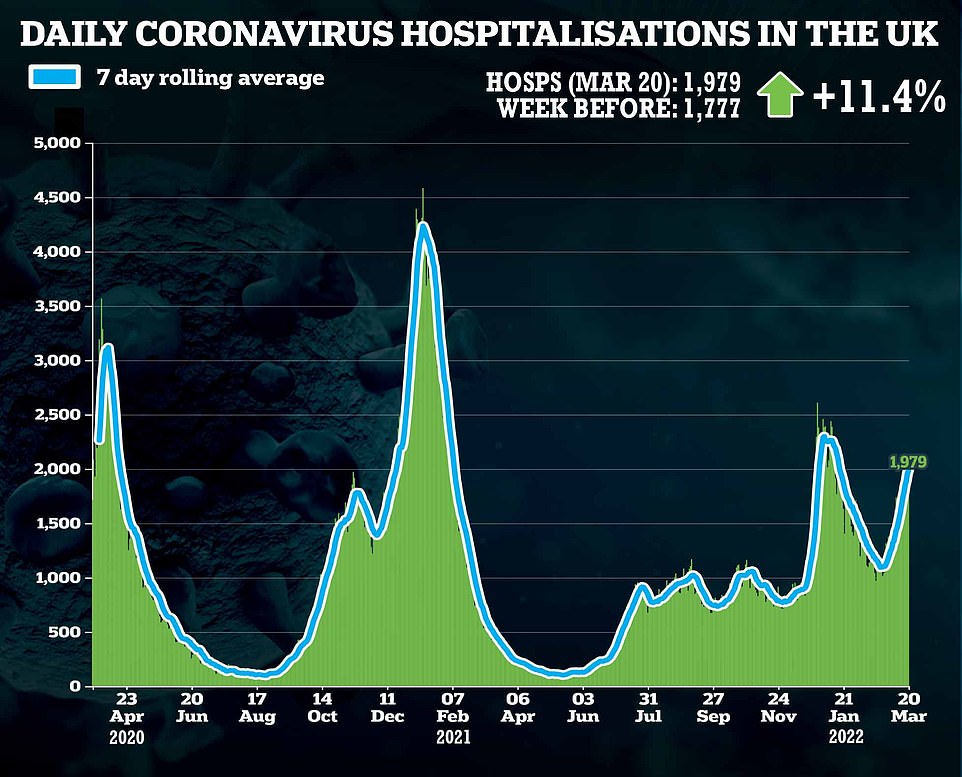 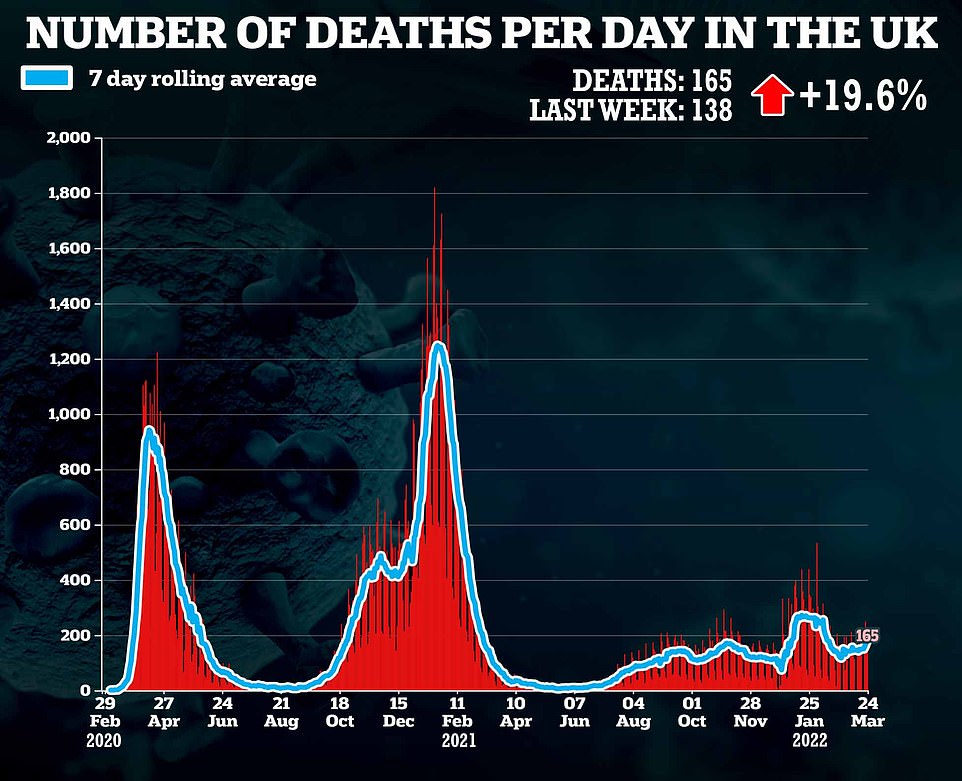 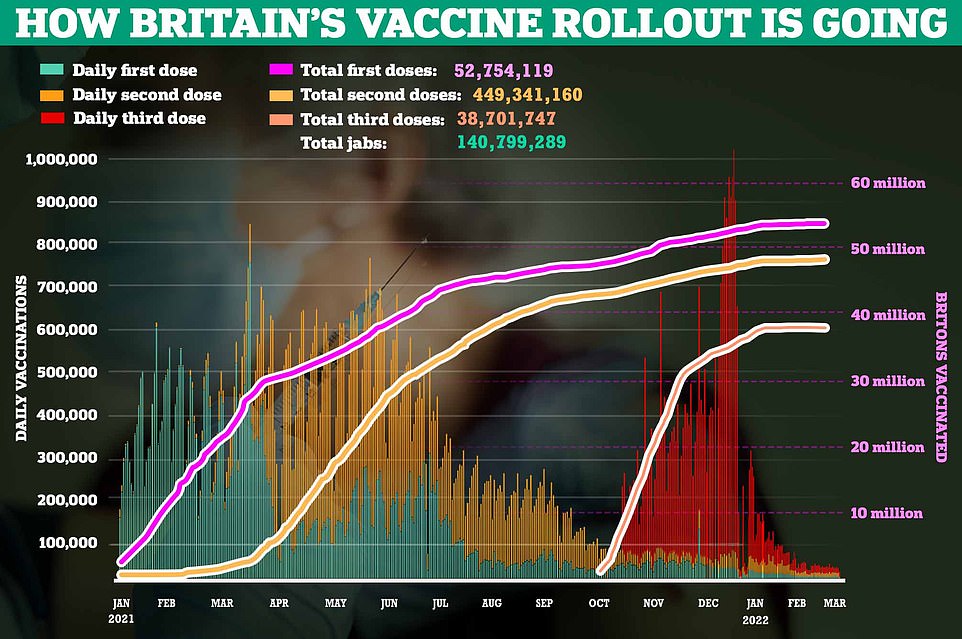 The vast majority of the cases, 79,373, were registered in England, while 2,743 were logged in Wales and 2,524 were detected in Northern Ireland. Another 13,564 people tested positive in Scotland.

Meanwhile, 1,979 infected people were admitted to hospitals across the UK on Sunday. The figure is 11.4 per cent higher than one week earlier.

And 16,975 Covid-infected people were in hospitals across the UK by 8am yesterday, up 18.1 per cent in a week. The figure is the highest recorded since January 24, when the Omicron winter wave was receding.

England’s Covid wall of immunity revealed: How 99% of adults and up to 96% of children have antibodies against virus two years after country was plunged into first lockdown

Official charts have revealed England’s immense Covid wall of immunity exactly two years after the country was plunged into its first lockdown.

The graphs, released by the Office for National Statistics (ONS), show that 99 per cent of adults in England had detectable levels of the Covid-fighting antibodies by February 28.

An estimated 96 per cent of children aged 12 to 15 also had the protective proteins last month, as did around 81 per cent of youngsters between eight and 11.

Covid antibodies are produced by the immune system in response to either natural infection or vaccination and they indicate at least some level of immunity against the disease.

The figures — based on blood samples from 75,000 people — come exactly two years after the UK went into the unprecedented first lockdown.

Boris Johnson announced on the night of March 23 that the following day, Britons should not leave their home but for exceptional circumstances. At that point, there was virtually zero immunity to the novel virus.

But now more than 85 per cent of Britons have been double-jabbed and 67 per cent have got three doses, according to official figures, while separate estimates suggest half of Britons have already caught Covid.

Despite hospital admissions for Covid creeping up in recent weeks, the ONS data shows no sign of waning immunity in elderly groups. The ONS estimates 99 per cent of over-80s had the proteins last month, who are in line to get a fourth jab this month.

Meanwhile, another 165 deaths within 28 days of a positive test were registered, bringing the total since the start of the pandemic to 164,282.

Vaccination data shows 91.7 per cent of over-12s in the UK have now had at least one Covid vaccine, while 85.8 per cent are double-jabbed and 67.3 per cent are boosted.

Separate data, released today by the UKHSA, shows the number of people testing positive has increased in every local authority in England.

Nine of the 10 worst-hit areas in the country are all in the South West. In North Somerset and Cornwall and the Isles of Scilly, 1.5 per cent of people tested positive in the week to March 24.

Confirmed cases also soared in Torbay and Dorset, where 1.4 per cent of the population tested positive, and Somerset, Isle of Wight and Wiltshire, where 1.3 per cent people had their infection confirmed.

In South Gloucestershire, Plymouth and Devon, 1.3 per cent of the population, or one in 77, also tested positive.

But the authorities with the biggest week-on-week rise in cases are mostly located in the North West, where the proportion of people whose swabs are positive jumping by up to 70 per cent.

Parts of Yorkshire and the Humber also saw the biggest rise, with Wakefield seeing cases jump 57 per cent week-on-week, while cases increased 56 per cent in Rotherham and 54 per cent in North East Lincolnshire and Redcar and Cleveland.

Tameside, in the North West, completed the top 10 places with the biggest weekly rise, with cases rising 53 per cent.

And data from Scotland today showed that the number of infected people in the country’s hospitals hit 2,322 — the highest figure ever recorded in the country, breaching the high of 1,571 during the Omicron wave and 2,053 during the 2020 winter peak.

The figure increased by 65 compared to the 2,257 reported yesterday. There are now 26 infected patients in intensive care in Scotland, up one in the last 24 hours.

Another 13,564 cases were posted on the Scottish Government website, while 50 virus deaths were confirmed.

And Covid hospitalisation data for England shows admission rates among the over-75s have jumped to their highest level in more than a year, when the second wave of the virus was at its peak.

Rates among other age groups were lower, though all showed a week-on-week increase, according to the UKHSA. 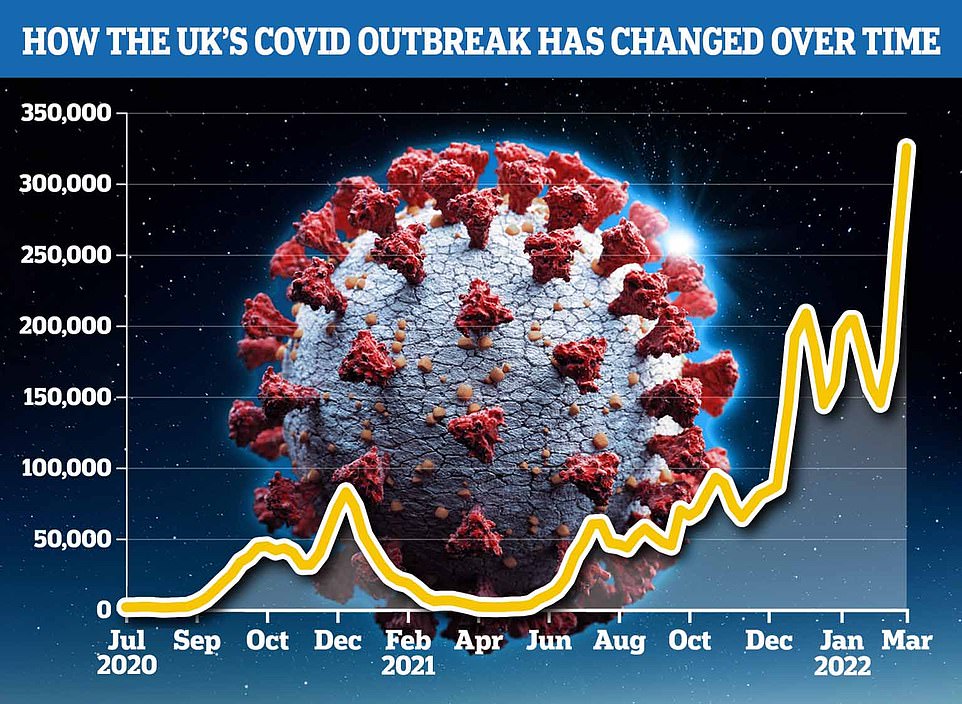 Dr Susan Hopkins, chief medical adviser at the UKHSA, said the figures are ‘a reminder to us all that the pandemic is not over’.

She added: ‘Hospital admissions and cases of Covid have continued to rise and we can expect to see further increases before we start to see a decline.

‘Vaccination is the key to staying safe from serious illness and it’s vital that everyone gets all of their recommended doses.

‘Wearing a face covering in crowded or enclosed spaces, socialising outside where possible, and always observing good hand hygiene will also help to reduce the spread of Covid-19.

‘Anyone with symptoms or a positive tests should limit their contact with others as much as possible.’

And Professor Spector, who leads the ZOE Covid surveillance study, warned Covid is now ‘affecting more people than ever before’ and many are ‘isolating when they have symptoms’.

He urged Britons to self-isolate if they have cold-like symptoms and get a test ‘if they can’.

Data from the ZOE study, which is based on swabs of more than 60,000 people and reports from 840,000 weekly contributors, today suggested there are 324,954 new symptomatic infections per day.