Tackling sexual harassment and bullying in the legal profession ranks as a higher priority for regulators in Australasia and the Pacific than the rest of the world, a report has found, after an earlier study revealed higher rates of reported misconduct in Australia than the global average.

Research by the International Bar Association (IBA) and legal market research firm Acritas, released on Monday, collated the results of a global survey of almost 70 bodies regulating lawyers, including 10 regulators in Australasia and the Pacific. Law societies and bar associations were among those surveyed. 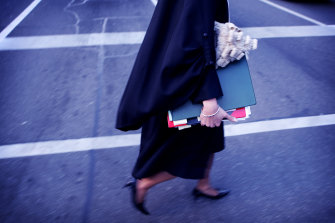 Regulators in Australasia and the Pacific say cracking down on sexual harassment and bullying is a top priority.Credit:Jessica Shapiro

Most regulators identified a crackdown on sexual harassment as a high priority, but regulators in Australasia and the Pacific led the charge. On a scale of one to 10 – with 10 being the highest priority – regulators in the region reported a median ranking of eight for tackling harassment, compared with seven in North America and Europe. Bullying was given the same priority ranking in the region, dropping to seven in Europe and five in North America.

Victorian Legal Services Commissioner Fiona McLeay said in a foreword to the IBA report: “Workplace sexual harassment and bullying have been against the law for some time now … Yet lawyers who would not otherwise break laws (eg, by stealing their clients’ funds) nonetheless continue to harass or bully their colleagues.” Regulators were rightly concerned, she said.

The latest IBA survey follows a 2019 report by the association, titled Us Too? Bullying and Sexual Harassment in the Legal Profession. It found almost 30 per cent of Australian respondents to the IBA’s global survey of 7000 lawyers reported they had been sexually harassed at work, while 60 per cent said they had been bullied. The global averages were 22 per cent and 43 per cent. The IBA said at the time the higher-than-average figures may reflect measures to encourage reporting.

Australian regulators are empowered to take disciplinary action against lawyers who engage in sexual harassment and bullying at, or in connection with, their work. A NSW barrister was reprimanded last year by the NSW Civil and Administrative Tribunal for unsatisfactory professional conduct towards a woman at a work function after the regulator, the Council of the NSW Bar Association, took action.

The Court of Appeal rejected the regulator’s bid for a fine. It said a “substantial fine” would have been warranted, but the need for it was “obviated” by the fact the barrister faced a very sharp increase in his professional indemnity insurance premiums as a result of the proceedings.

While the IBA did not comment directly on this case, it said “low-level sanctions … may discourage targets of harassment from reporting”.

Gabrielle Bashir, SC, President of the NSW Bar Association, did not comment on that case or the IBA’s commentary. However, she welcomed the report and said “we’re committed to driving any unlawful harassment, bullying, discrimination and victimisation out of the profession, and we’ve taken many steps to ensure that”.

Bashir said the association had taken on board the Australian Human Rights Commission’s [email protected] report, and “we will continue to drive reform where it’s needed”. The bar rules governing barristers’ conduct have also been updated to reflect federal legislation.

The co-regulators of the NSW legal profession, the Legal Services Commissioner, the Bar Association and the Law Society, launched an online harassment and bullying reporting platform this year known as Elker, which enables informal and anonymous reports to be made. The Bar Association also has an online tool called Spot that allows confidential and anonymous records of inappropriate behaviour to be created and sent to the association’s independent Sexual Harassment Officer.

The lead author of both reports, Kieran Pender, said “regulators across the globe are grappling with how to address inappropriate behaviour within the law.

“Our aim was to allow regulators to learn from each other, by sharing insight among peers and offering guidance to inform the evolution of regulatory and disciplinary approaches to bullying and sexual harassment.”