The cracks on trains that brought England’s railways grinding to a near halt were caused by excess movement and salt corrosion, regulator finds

Cracks found on trains that brought cross-country services on Britain’s railways to a near-standstill almost a year ago were caused by excess movement and aluminium corroded by salt in the air, an investigation found today.

Fatigue cracking in the area above the wheels of Hitachi-built Class 800 trains was a result of the rolling stock experiencing more movement than allowed in original designs, the Office of Rail and Road (ORR) has said.

Britain’s rail safety regulator added that it is not known for certain why this happened, but potential factors identified include wheel wear – which is when the shape of wheels changes during use – and track design.

The ORR found in a report released today that cracks on lifting points – which allow carriages to be raised during maintenance work – resulted from the use of a particular type of aluminium which was corroded by salt in the air.

The probe said the ‘specific corrosive environment for the alloy is considered to be endemic in the UK, arising from high humidity, rain and seawater exposure’ – suggesting the weather played a part in causing the damage.

Seawater could have had its biggest impact on trains operated by Great Western Railway, which run alongside the Devon coast at Dawlish on the picturesque line which was designed by Isambard Kingdom Brunel in the 1840s.

The withdrawal of Class 800s until more safety checks were introduced led to a week of severe disruption in May 2021 to services on Great Western Railway, London North Eastern Railway, TransPennine Express and Hull Trains. 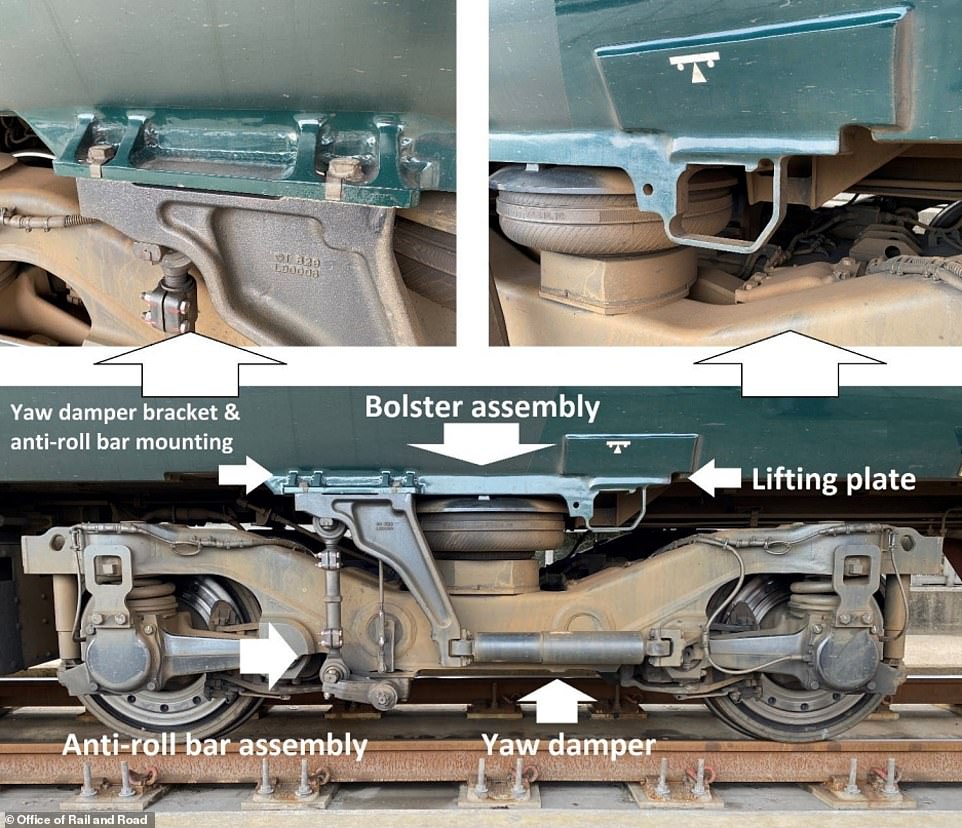 CONNECTION POINTS AND LIFTING PLATE: The image above shows the main features to note on the Hitachi Class 800 trains, including the connection points for the anti-roll bar and the yaw damper between body and bogie, and a lifting plate used when the vehicles are being lifted for maintenance. During scheduled maintenance activities on the trains last year, cracks were found in the area of the bolster close to the yaw damper bracket and anti-roll bar fixing points 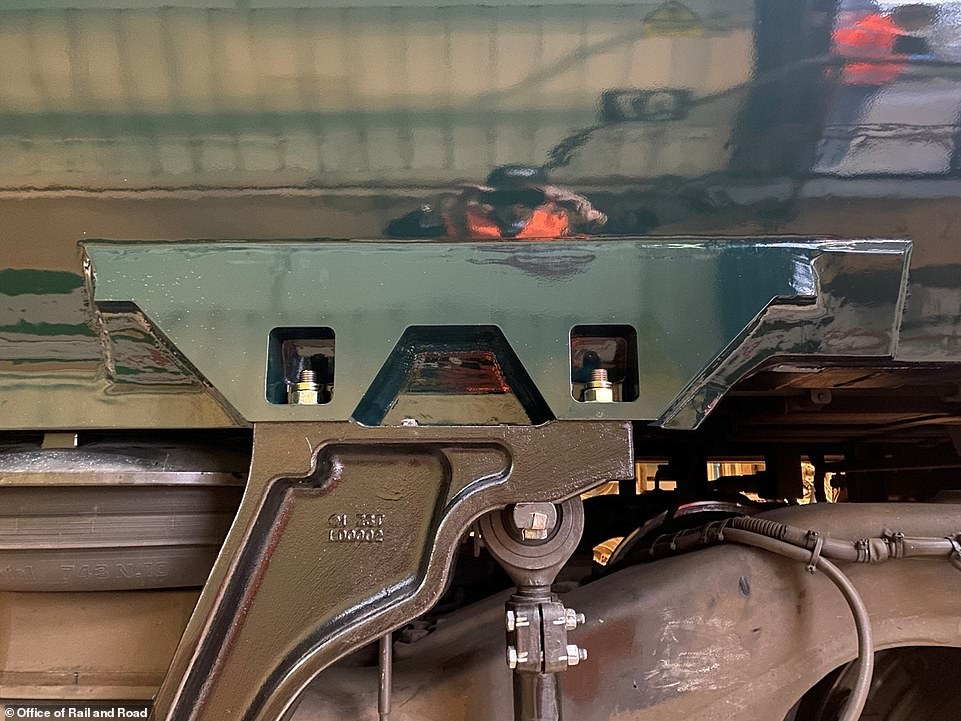 MODIFICATION OF BOLSTER AREA: The ORR said Hitachi’s permanent solution to address the fatigue cracking issues in the bolster area is to remove the affected part of the original body structure, including the longitudinal welds where the fatigue cracks have occurred and the mounting brackets. The structure is rebuilt using a modified design (shown above) that provides an unchanged interface with the yaw damper bracket and anti-roll bar. The modifications address the load capability of the design and the potential for insufficient fusion in the welded joint arising from weld design and inspection criteria 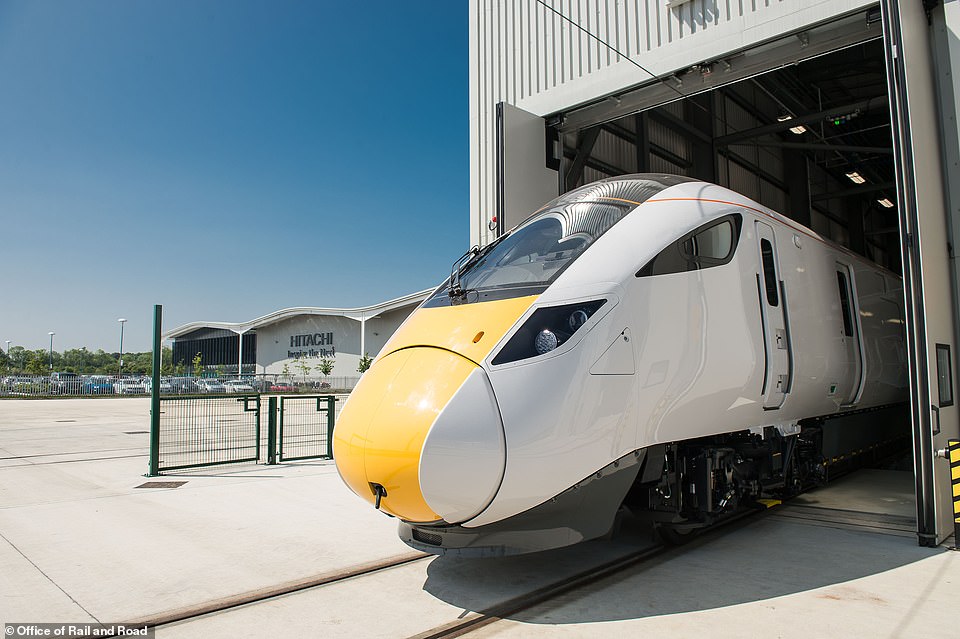 CLASS 800: A Hitachi Rail Class 800 train at its manufacturing facility in Newton Aycliffe, County Durham. Fatigue cracking above the wheels of the trains was a result of the rolling stock experiencing more movement than allowed in original designs 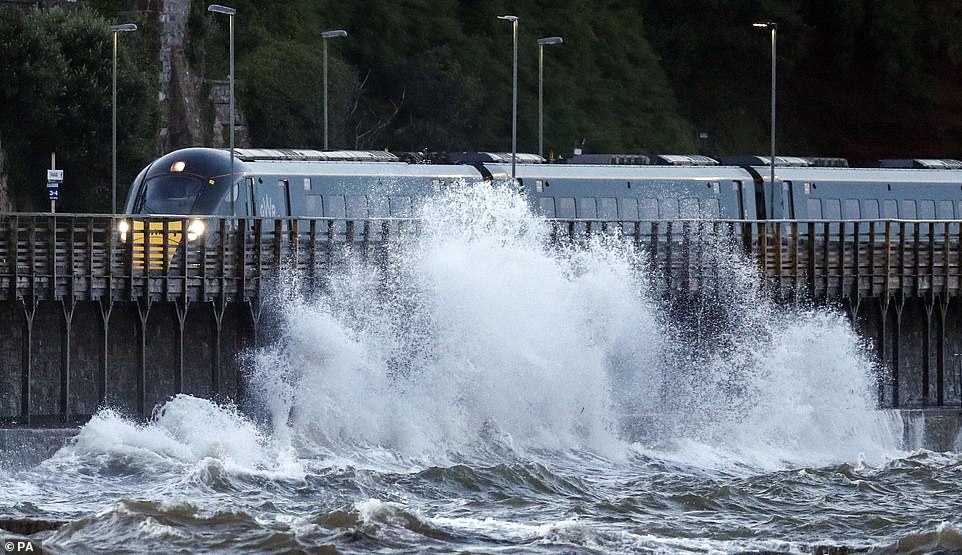 Seawater could have had its biggest impact on trains operated by Great Western Railway, which run alongside the Devon coast at Dawlish (pictured in 2020) on the picturesque line which was designed by Isambard Kingdom Brunel in the 1840s

The ORR, which is a non-ministerial government department, said ‘stringent mitigation measures’ such as regular inspections were put in place to allow trains to re-enter service ‘without passenger safety being compromised’.

Millions of travellers face an Easter Bank Holiday getaway nightmare of disruption and spiralling prices on trains, planes and the roads.

Large swathes of the rail network will close for £83million-worth of engineering works over the busy four-day weekend.

More than 500 signalling and track upgrade projects across the country include the closure of London ‘s Euston and Victoria stations to most services. 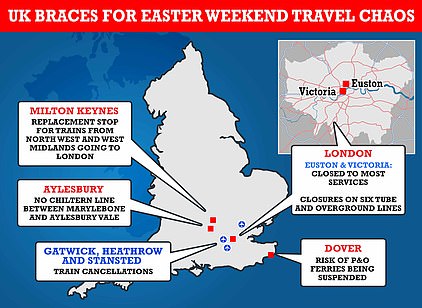 It will cause chaos for the thousands of football fans travelling to the FA Cup semi-finals, between Manchester City and Liverpool and Chelsea and Crystal Palace, at Wembley stadium.

Trains into London from the North West and West Midlands will instead stop at Milton Keynes Central, meaning other routes into the capital face being overwhelmed. The FA is urging fans from the North to avoid the railways and use specially laid-on buses or travel before the weekend instead.

All Southern trains between London Victoria and East Croydon have been axed, also causing havoc for air passengers landing at or trying to reach Gatwick Airport. It means passengers on trains diverted via London Bridge face chaos.

London Underground services on the Piccadilly line to Britain’s busiest airport, Heathrow, will be suspended while buses will also replace trains for part of the journey between the capital and Stansted Airport.

London Tube closures on the District, Hammersmith & City, Northern and Docklands Light Railway lines will also make it harder travelling around the capital.

The trains have ‘performed as specified’ and ‘no safety failures’ have been recorded, the report added.

Recommendations issued by the regulator include the rail industry collaborating to evaluate whether standards for train design, manufacture and maintenance take into account pressures created by train movement on Britain’s railways.

It urged Hitachi to conduct a formal review of its welding processes, and for train designers to consider what steps should be taken to ensure protection of structures when 7000 series aluminium components are used, as they were in building Class 800 trains.

The report also called on the industry to develop a process for responding to similar ‘crisis events’ in the future.

This is expected to take place over the next six years to minimise the number of trains taken out of service at any one time.

ORR’s HM Chief Inspector of Railways Ian Prosser said: ‘With our oversight, Hitachi Rail and operators have put in place robust plans to make sure the right safety issues are being managed following the initial discovery of cracks on the trains, which have allowed trains to re-enter service. Safety remains the number one priority.

‘Our review provides a clearer picture of the issue and we will continue our oversight to ensure work moves forward to agree the permanent solution and our recommendations are acted on.

‘It is important that the whole industry works together to learn lessons from what has happened and our recommendations will help with that.’

Chaos was sparked in May last year after cracks were found under some of Hitachi’s trains, which it leases to the rail operating firms, and thousands of rail users were advised not to travel.

A total of 182 Class 800 trains were taken out of service as a safety precaution – including 93 on Great Western Railway, which runs to beauty spots in the South West of England.

Another 65 were affected on London North Eastern Railway, which serves Scotland, the East Midlands and the North of England.

Most of the trains were bought around a decade ago as part of a £5.7billion scheme funded by the taxpayer to replace the ageing Intercity 125s which were developed in the early 1970s before coming into regular service in 1976.

Under the slogan ‘Let the train take the strain’, the 125s provided almost all services from London to the West Country and South Wales, and many trains on the East Coast Mainline between London, Yorkshire and Scotland.

A Hitachi Rail spokesman told MailOnline today: ‘The ORR’s report identifies that all Hitachi trains meet relevant standards and that we took the appropriate action to prioritise safety and maintain train availability. 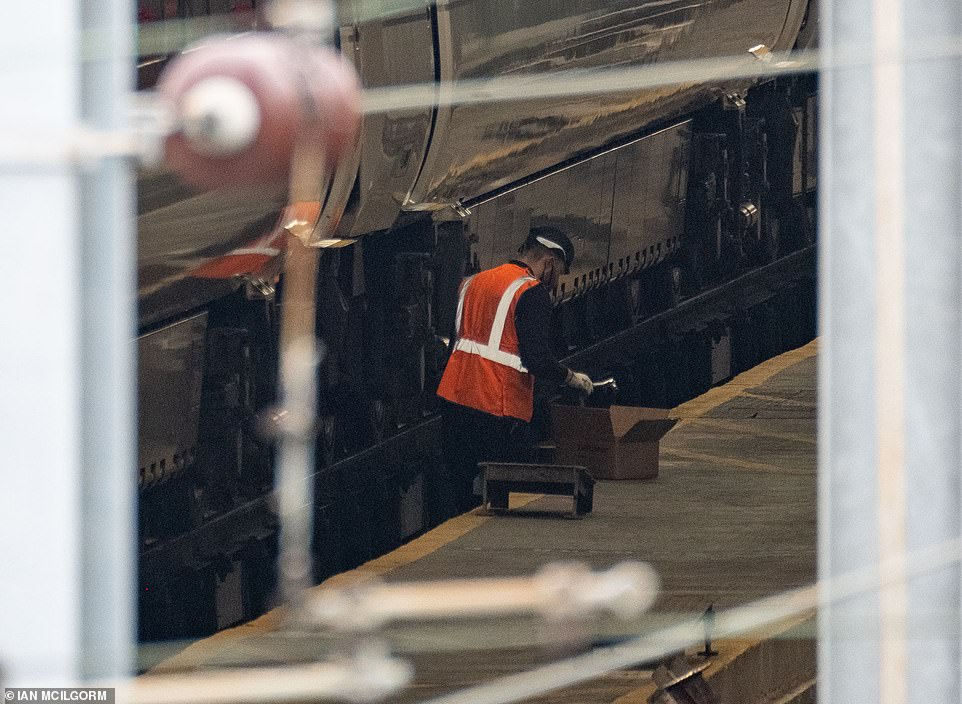 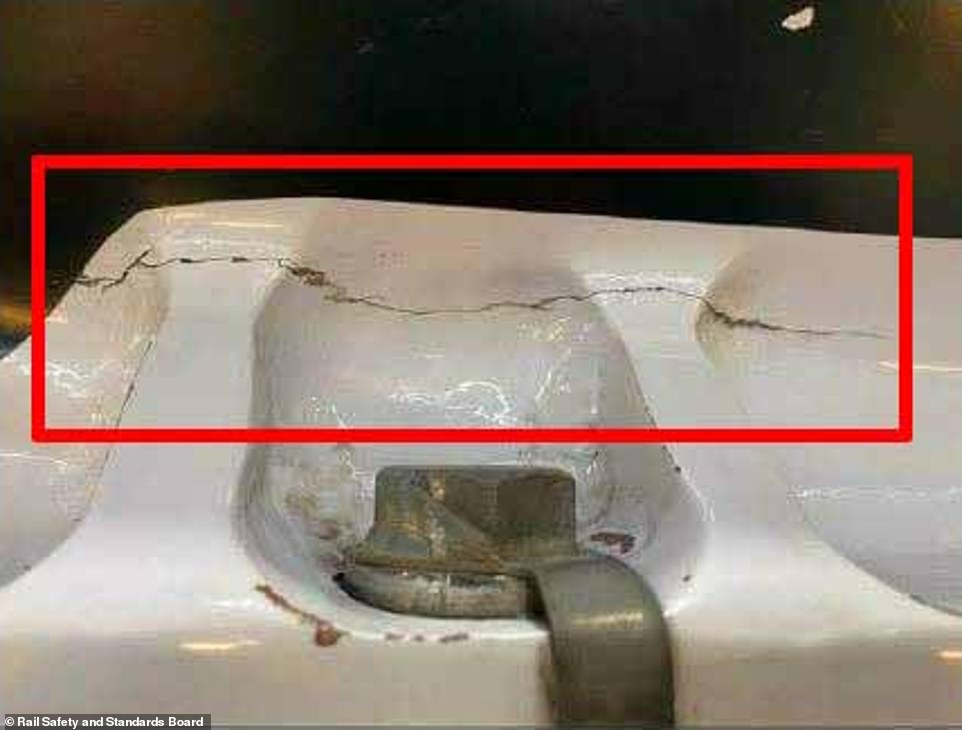 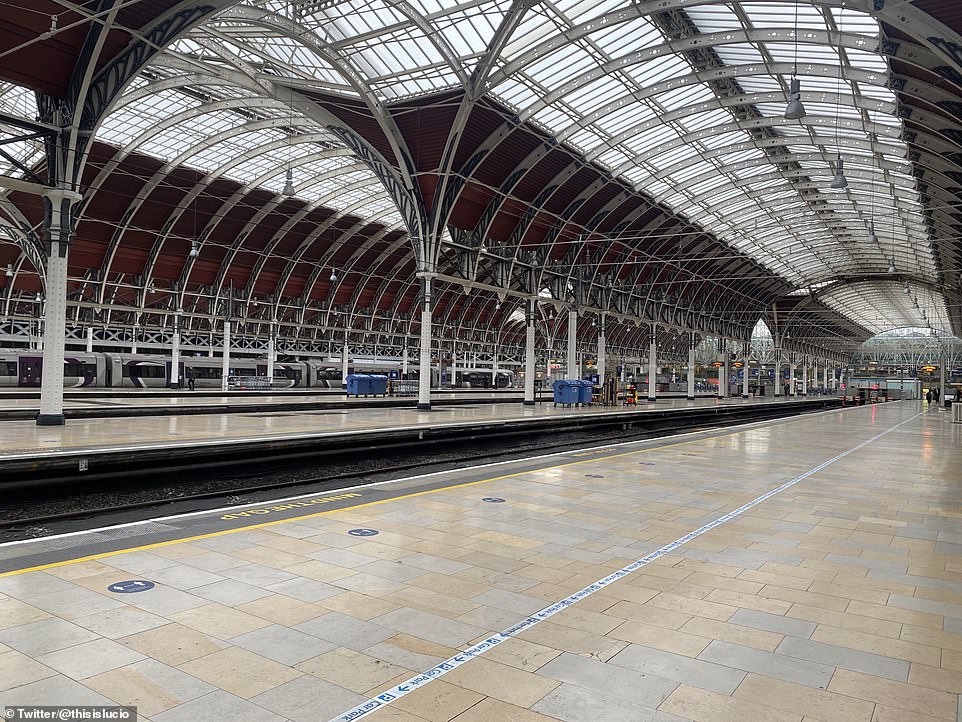 ‘The report also provides a detailed account of the tireless work to simultaneously keep trains running safely, while working towards the long-term solutions.

‘The proposed engineering solutions outlined in the report are currently being reviewed by all partners. We are working together to finalise the plan for their implementation, while always prioritising safety and train availability to support consistent passenger services.’

Sources within Hitachi explained that once the Fleet Recovery Programme is agreed, the company will be able to address all the trains with fatigue cracks within three years.

The second phase of the programme, again taking three years, will then focus on preventative solutions.

The sources said the scheme has been designed to minimise disruption to passengers while ensuring safety, with the minimum number of trains out of service at any one time.