Crown casino has launched an investigation into one of its employees after it was revealed the man is part of a neo-Nazi group and boasted about “bossing around the f—g n—-rs” who are his subordinates at the Melbourne casino.

The first part of an eight-month investigation by The Age, The Sydney Morning Herald and 60 Minutes published on Sunday detailed an unprecedented infiltration of Australia’s largest neo-Nazi group, the National Socialist Network.

The investigation exposed the network’s secret membership lists and its leaders’ support for the Christchurch terrorist and terror suspects facing trial in NSW and South Australia. 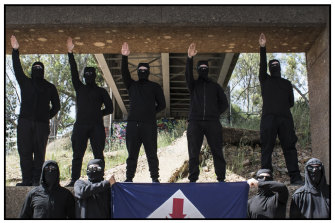 Neo-Nazis from the National Socialist Network, from their encrypted online sites.Credit:

One member identified during the investigation was a security manager for Crown casino, Daniel Todisco, a former special forces soldier who has a Victoria Police vetted security licence and says he carries a baton in his boot.

He boasted of “bossing around the f—g n—-rs” who are his subordinates at Crown, saying: “I just get them to do the shit jobs, to be honest with you.”

The investigation found he financially supports the group but is less active than other members. He claims to be a former Army Commandos reservist.

In a statement released on Monday morning, a Crown spokeswoman said the company had started an urgent investigation into the matter.

“Diversity and inclusion are at the heart of Crown’s values and our workplace does not condone discrimination on any level,” she said.

“We are deeply concerned to hear last night’s media allegations and unauthorised comments attributed to a Crown employee.” 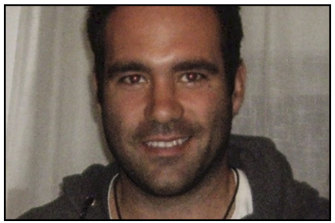 The investigation, which involved an infiltrator filming and recording from inside the National Socialist Network, found the group’s leaders are liaising with outlaw bikie gang associates, a prison skinhead gang and members of international neo-Nazi terror groups.

ASIO Director-General Mike Burgess has warned that Australians as young as 16 are being radicalised to support a white-power race war, a phenomenon fuelled by the COVID-19 pandemic.

The chair of the Anti-Defamation Commission, Dvir Abramovich, said on Monday morning that the investigation was a timely wake-up call and a reminder that violent extremists are a real threat.

He called on the federal government to designate the National Socialist Network a terrorist organisation.

“These neo-Nazis, determined to accelerate their movement’s deadly ideology, are on a recruiting drive, trying to reach new audiences and attract disaffected young white men, just like Brenton Tarrant, to their evil cause,” he said.

“It is no surprise that they are engaged in an unprecedented outreach effort of mobilising, since their aim is to translate their online incitement and vilification of Jews and other minorities to real-world action.

“No one should be surprised if such activities end in violence, or worse, since the followers of the National Socialist Network are enmeshed in a conspiratorial and hateful world that promotes the notion that the white race will be extinct unless radical action is taken.”

Prince Harry and Meghan: Expert discusses couple’s workload We use your sign-up to provide content in ways you’ve consented to and to improve our understanding…