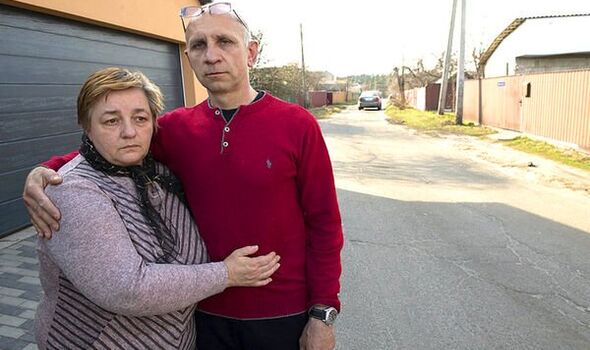 Men including a priest were executed, a man was stripped and robbed at gunpoint and a 77-year-old disabled grandmother was shot dead at home.

On the outskirts of Ivankiv, 50 miles north of the capital, we see the corpse of a Russian soldier in a body bag – before hearing of the savage treatment of the locals.

Severely disabled local grandmother Svetlana Mykolayivna, 77, awoke on a night in late February as troops tore through her bedroom wall with 40mm tracer rounds. She lit her lantern and was shot dead through her window.

She was found by her son-in-law Andrei, 52, her walking sticks still leaning against the wall. Daughter Irina, 52, right with Andrei, says: “I’m too upset to go to her house – it won’t bring her back.”

A few miles away, Mykola Koske, 59, stares at the ruins of his Hunter’s Lodge restaurant. He says: “My friend Olek was shot dead by the Russians for no reason and a local priest was shot.”

Andre Lovrenko, 37, was held at gunpoint by Russian troops. He recalls: “They took me to the river and stripped me naked. They kept calling me a fascist and tore up my passport.”

In the village of Kozarovychi, Volodymyr Furs, 67, says that out of a population of around 2,000 at least 300 people are missing, including his friend Ihor. He adds: “Somebody said his body was found in another village with his hands tied behind his back, shot dead.”