BOSTON — At 5 on a windy winter morning, in a cold, harshly lit warehouse in Boston’s seaport district, Baracat Paiva stared down at the 200-pound bigeye tuna before him and reached for his knives.

Mr. Paiva, as tall and imposing as the dead fish before him, dipped his cloth-gloved hand in warm water, to keep his fingers from numbing. He deftly sharpened an eight-inch knife against a water stone before plunging it into the silver-scaled fish and sawing off the collar, using another, bigger knife to lop off the bone. A few bits of tuna sprayed off his knife and stuck to his hooded sweatshirt and flat-brimmed baseball cap, but he didn’t seem to notice.

Then, in a single motion, he slid the knife down the length of the fish on one side, then made another slice on the other. After a few more strokes, he carefully peeled away the rib cage and splayed open the fish, which split into four neat sections. He picked up one of the fillets, brimming with burgundy-hued flesh, and bounced it around in his arms like a baby.

Mr. Paiva, the highest-volume fish cutter at the popular Boston wholesaler Wulf’s Fish, has become something of a celebrity at a job that normally doesn’t attract much attention.

The videos of his cutting skills that he regularly posts on Instagram have drawn hundreds of thousands of views, and comments from admirers around the world who are mesmerized by his swift, graceful motions and the sheer size of the fish he breaks down.

Mr. Paiva’s bravura personality is big, too. He often adds urgent background music, or shouts out his slogan: “Boom!” Occasionally, he’ll lick or kiss the fish, or cut out a small piece and eat it — theatrics that have won him comparisons to Salt Bae, the Turkish chef (real name: Nusret Gokce) famed online for playfully salting steaks. Some fans call Mr. Paiva “Fillet Bae.”

Many of those followers might be surprised to know that little over a decade ago, Mr. Paiva (pronounced PIE-ay-vah) had never even touched a knife. He was a professional soccer player in Brazil.

Mr. Paiva, 37, grew up surrounded by seafood; his hometown, Ilhéus, is on Brazil’s eastern coastline. But he was most interested in playing soccer. “Eighty percent of Brazilians are raised with a ball in their hands,” he said.

At age 17, in 1998, Mr. Paiva was spotted by a talent scout and invited to become a goalie for Colo Colo de Futebol e Regatas, his town’s professional soccer club. He was the youngest player on the team.

“I was living the dream,” he recalled­. Many people his age wanted to play soccer professionally, and the Brazilian teams are known the world over.

But a few years later, at the prime of his career, he cracked his ribs trying to catch a ball, and a doctor told him he couldn’t play soccer anymore. “I was devastated,” Mr. Paiva said.

In 2004 his father sent him to Norwich, Conn., to live with family friends and get his mind off soccer. Mr. Paiva found a job as a dishwasher at Jasper White’s Summer Shack, a seafood restaurant in the nearby Mohegan Sun casino.

He worked his way up to shucking oysters. Then one day, his boss threw 100 pounds of bluefish onto the counter and showed him how to break them down into fillets.

Fish cutting “was really unfamiliar to me,” Mr. Paiva said. “In Brazil, we eat everything whole, with the bones. But this was fun.” And he loved eating seafood.

The new job became an obsession. He practiced constantly. He memorized each motion and cut. He studied the anatomy of countless species.

He liked that this domain was completely different from football. “Soccer is a skill I was born with,” he said, while fish cutting isn’t innate. “It takes a while to get better. You have to be really involved.”

In 2014, Mr. Paiva moved to Boston to work at the seafood wholesaler, Georges Bank, which was acquired by Wulf’s two years later. As a fish cutter at Wulf’s, Mr. Paiva works with high-priced species that are sold mainly to chefs.

At the start of 2017, he posted a video to Instagram of himself breaking down a halibut, and it went viral. Now he is regularly filmed by Cristian Delgado, a fellow fish cutter at Wulf’s, or uses a GoPro camera that he straps to his head.

Mr. Paiva often speaks as if reading off inspirational sports posters (“Passion is what moves you.” “Keep focused, keep motivated.”). He frequently quotes the adoring messages he receives on Instagram. His hands are covered in cuts and scars — a poke on his middle finger from an amberjack fin, remnants of stitches from when he sliced off part of his thumb while cutting a bluefish.

He drives to his job five days a week from Lynn, northeast of Boston, where he lives with his wife, Miranda, who works in marketing for a biotech company. He has a 10-year-old-daughter, Jennifer, from a previous relationship.

On this particular morning, by 9, Mr. Paiva had broken down a 200-pound bigeye tuna, a 150-pound swordfish, a 300-pound bluefin tuna, a 50-pound halibut and a 20-pound mahi-mahi — taking only a short break for breakfast: three boiled eggs and a pan-seared steak, cooked medium.

He operates on intuition: He can carve out a 50-pound fillet without using a scale. He knows exactly where to insert his knife to maximize the yield from each fish. At one point, he sliced off a halibut’s skin in a single stroke without looking directly at it.

Around midmorning, Mr. Paiva stood among 150 pounds of whole salmon, to be broken down into 300 portions. 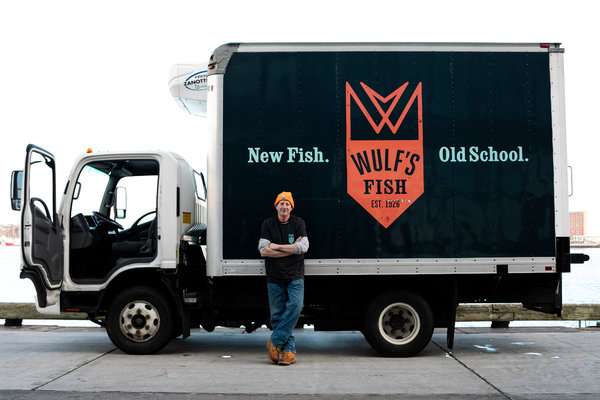 Mr. Paiva’s dexterity with his knives seems almost effortless. It’s a rare skill, said Richie Taylor, 68, who has been Wulf’s seafood buyer for more than 40 years. “A lot of people make a cut, then another cut, then another cut, and leave the rib bones in,” he said. Mr. Paiva “does everything in a single cut.”

His fans can’t see enough of it. “I literally got infatuated watching his videos,” said Drew Grosse, 35, the chef de cuisine at Little Donkey, a restaurant in Cambridge, Mass., that buys from Wulf’s. “He’s like Rocky Balboa, but he can break down a fluke in three minutes.”

Mr. Grosse said Mr. Paiva’s videos enhance the appeal of being a Wulf’s customer. “Just seeing him break down the 600-pound tuna and knowing that it is going to come to my restaurant — it is exciting,” he said.

Hiro Konishi, 57, a sushi chef at O Ya Boston (another Wulf’s customer), wrote in an email that Mr. Paiva is “an amazing technician.” He added, though, that “Japanese style preparation focuses on being gentle, i.e. not smacking the fish,” as he’s seen Mr. Paiva do on Instagram.

Ms. Villarini has one criticism: She wishes Mr. Paiva would use his platform on Instagram to highlight the environmental threats to marine life. (Mr. Paiva says one of his goals for 2019 is to promote awareness of pollution and climate change.)

Max Harvey, 47, the director of operations at Wulf’s, said that while he can’t quantify Mr. Paiva’s impact on sales, “his mystique and larger-than-life persona are tangible and part of our growth.” Neither Mr. Paiva nor his supervisor would say what the job pays, but ZipRecruiter estimated the average annual wage for a fish cutter at about $32,500.

It’s been 15 years since Mr. Paiva last touched a soccer ball, and though his injury has healed, he has no desire to play the sport again. He would prefer to spend the rest of his life cutting fish.

“I was in love, but that love ended,” he said. “I found another passion.”