For the millions of fed-up families and businesses who have suffered disruption and damage, the strikes infecting everyday life have been anything but a game.

Yet to the militant unions inflicting misery over Christmas and the New Year, that’s exactly what they are – quite literally. 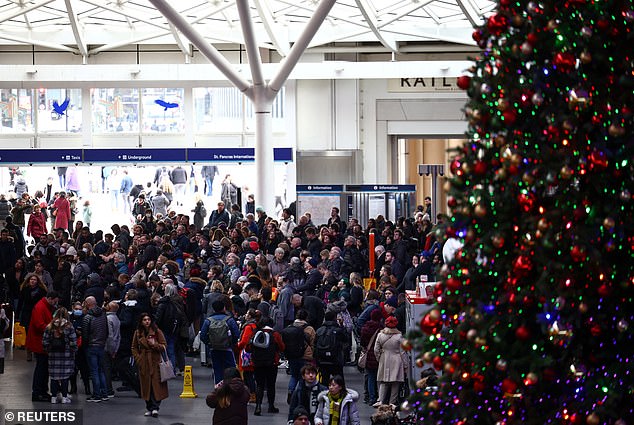 For the millions of fed-up families and businesses who have suffered disruption and damage, the strikes infecting everyday life have been anything but a game. Passengers are pictured above yesterday at Kings Cross

Displaying contempt for ordinary people, agitators travel from place to place to stand in solidarity with anyone striking – rail workers, nurses, teachers or whoever.

This is regardless of whether they have any personal involvement in a dispute – and irrespective of the particular grievance – be it pay or conditions. The aim is to artificially inflate support for walkouts.

Nothing could illustrate more potently that the mayhem is politically motivated – a disgraceful attempt by union leaders to ruin the economy and topple a democratically elected Tory Government they detest.

Rishi Sunak has promised new anti-strike laws to stop the barons holding the country to ransom. Surely by disinterring 1980s-style tactics to fuel maximum chaos, they give him the excuse he needs? 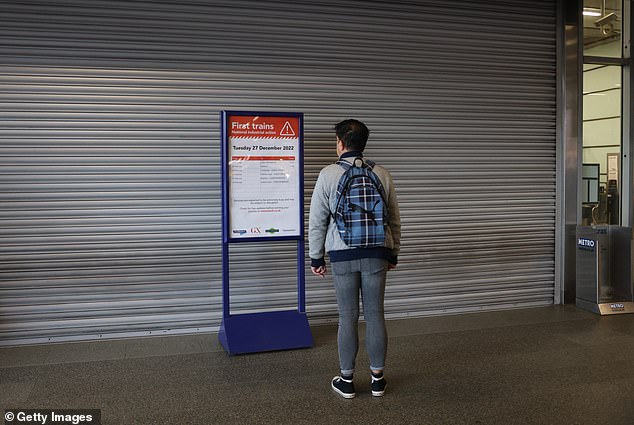 Nothing could illustrate more potently that the mayhem is politically motivated – a disgraceful attempt by union leaders to ruin the economy and topple a democratically elected Tory Government they detest. A traveller is seen reading a notice about the strikes at St Pancras yesterday

Six years ago, the Mail launched a campaign to end the deadly scourge of motorists using mobile phones at the wheel.

Disturbing studies had found that talking, texting or checking social media on a handset was as dangerous as drink-driving.

Since then, our End The Mobile Madness crusade has succeeded in securing tougher penalties and new laws to tackle motorists who put the lives of others at risk in such a mindless and selfish way.

Depressingly, the problem has not been eliminated. Today, we reveal that 53 drivers a day are being caught using their mobiles. In some parts of the country, the number apprehended has doubled.

Yes, police may be cracking down on transgressors more assiduously. But the abuse is still rampant – and campaigners fear this is merely the tip of the iceberg.

No one needs to tell that to the devastated family of Ciaran Leigh Morris, a two-week-old baby killed when a callous driver crashed into his pram while on the phone.

Using a mobile at the wheel must become as socially abhorrent as driving while drunk – and the punishments just as severe.

If the Chancellor is determined to do what is good for the economy, why won’t he restore duty-free shopping for foreign visitors?

The tax perk encouraged wealthy tourists to come here to buy luxury goods. But as the boss of Kurt Geiger says, by ruling out its return, Jeremy Hunt makes it more likely they will divert to Paris or Rome.

This will not only hurt embattled retailers, but also the hotels, restaurants, theatres and other places where travellers spend their money while in the UK.

The Treasury claims closing the loophole will raise £2billion, but it’s likely that sum would be less than the tax revenue lost.

Of course Mr Hunt needs to repair the nation’s finances. But he must avoid throwing the baby out with the bathwater.

The BBC receives £4billion a year from the taxpayer, but still insists it is short of money. Yet in a conspicuous waste of cash, the Corporation has blown £7million on a digital makeover including new logos to make it look more ‘modern’ to younger audiences. When they are stripping over-75s of free TV licences, don’t the broadcaster’s panjandrums understand the importance of spending every penny wisely?