Thousands of dairy farmers face ruin with a collapse in milk prices meaning they are getting just 15p a litre and cannot cover costs.

The figure is well below the 25p per litre cost of production and compares with more than 60p charged in supermarkets.

Details were laid bare by industry leaders in evidence to MPs on the Commons environment committee, which is investigating the effects of the virus on British farming. 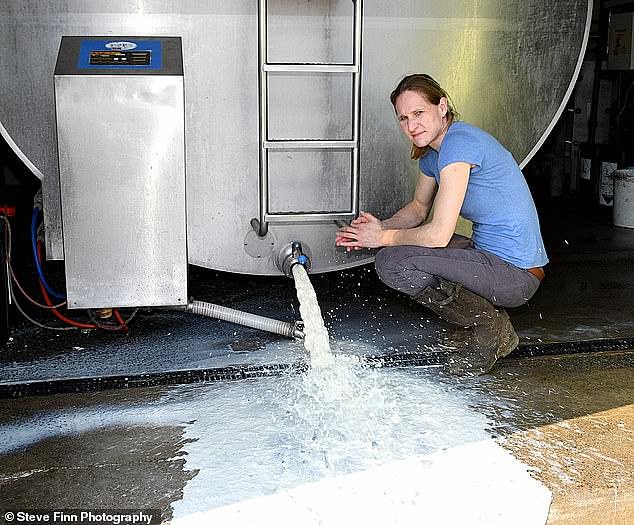 Pictured: a dairy farmer forced to throw away litres of milk. Thousands of dairy farmers face ruin with a collapse in milk prices meaning they are getting just 15p a litre and cannot cover costs

The closure of thousands of coffee shops and food businesses has created a glut, meaning some farmers have been told to pour away huge quantities of milk.

President of the National Farmers’ Union, Minette Batters, said: ‘A third of dairy farmers, thousands, are impacted. I am hoping and praying we will get an announcement of hardship payment for those most impacted dairy farmers this week. They are absolutely hanging on by the skin of their teeth.’

Tom Hind, Chief Strategy Officer on the Agriculture and Horticulture Development Board, said: ‘There are something like 2million litres of milk a day that would be going to the food service market which isn’t now.

‘Something in the region of £7.4million was lost out of dairy farmers’ pockets in April on the basis of milk price cut alone.

‘When we look into May that increases to something in the region of £13million to £14million for the month.’

Miss Batters said the problems also extend to potato, beef and sheep farmers as well as ornamental plant growers. She demanded the Government sets up a hardship fund with grants to ensure dairy farmers survive.