It was one of those mortifying TV moments almost too cringeworthy to keep watching.

Babatúndé Aléshé left the ITV News presenter and his future I’m A Celebrity campmate Charlene White perilously dangling off a 32-storey building as he completely bottled it, refusing to step even one foot onto the plank.

Now I’m no fan of great heights, but neither was Charlene or the third celebrity contestant, Lionesses World Cup winner Jill Scott, who scurried out without a moment of hesitation after Babatúndé’s complete capitulation.

Charlene and Jill were both aware that ten million people were watching and that the whole point of entering the sadistic reality show is to take part in challenges that push normal human boundaries.

Of course, all three contestants were wearing harnesses to protect them from falling and ITV’s health and safety team had worked overtime to assure them it was all perfectly safe, knowing even the slightest mistake could take the show off air forever. 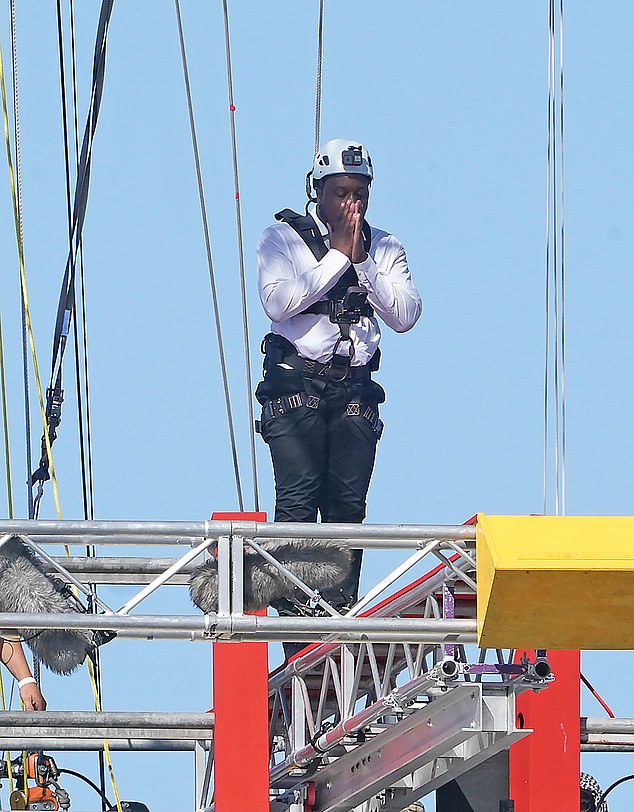 Babatúndé Aléshé completely bottled it, refusing to step even one foot onto the plank 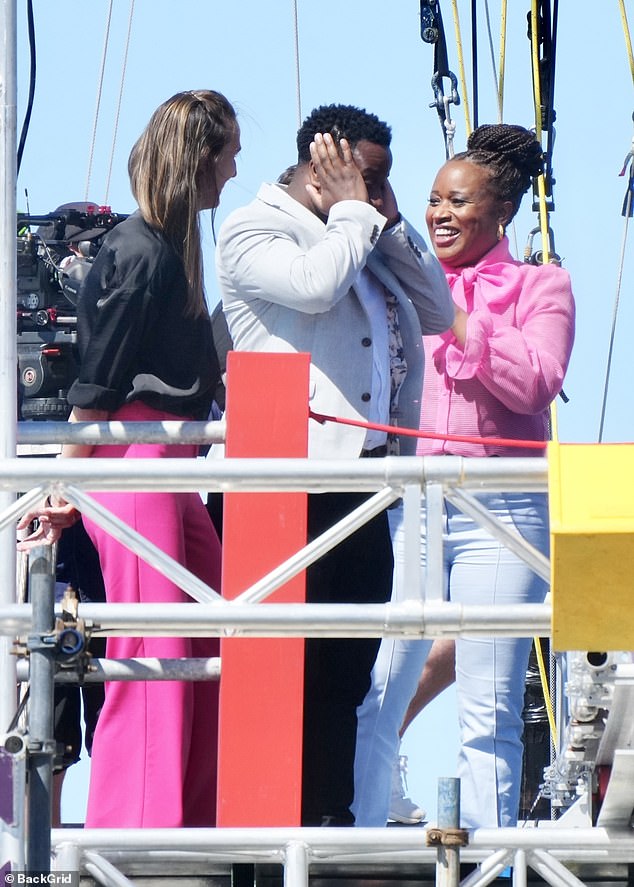 He was whimpering like a little girl atop the Focus building on Australia’s Gold Coast before the challenge even began. Pictured with Jill Scott (left) and Charlene White (right)

So what the heck was the point of the virtual unknown Babatúndé – largely famous for being the BFF of Mo Gilligan – signing only to give up at the first hurdle?

Especially seeing just minutes earlier in his introductory video, he had pledged: ‘I have a lot of fears I need to conquer.’

Well, that sentiment was soon out the window as he was whimpering like a little girl atop the Focus building on Australia’s Gold Coast before the challenge even began.

The Walk the Plank trial is not new and has been used in recent years as one of the show’s iconic opening challenges, but this year the twisted producers added an extra element of The Ledge to make the torture last longer.

On screen Babatúndé’s hesitation and eventual backdown lasted just a few painful seconds, but reports over the weekend suggested it took him 45-minutes to say no, putting Charlene and Jill through a heap more psychological torture, even though they continued to offer him words of encouragement during the delay.

In tears, Babatúndé joked, ‘it’s windy, that’s contributing to the water in my eyes…’, before yelping those fateful words, ‘I’m A Celebrity Get Me Out of Here’, without having entered the jungle first.

I think what surprised me most was the complete lack of embarrassment from Babatúndé at the fact he’d just chickened out, while his two female counterparts had been brave enough to ace the terrifying challenge with him pathetically watching on from the sidelines with his head in his hands as Charlene and Jill plunged off the building to win the stars.

They both offered him platitudes when he failed to compete, even though it cost their team a meal.

A few years ago, you would have expected the show hosts Ant and Dec to make a few digs about such a cop out, but not anymore; this is the woke world of ITV in 2022 where everyone’s a winner.

Indeed, a source played along, telling a newspaper: ‘Babatúndé naturally appeared upset but there is nothing to be ashamed of. You need nerves of steel to do that and not many would have the guts.’

Perhaps I shouldn’t be surprised by the 36-year-old East Londoner’s lack of courage, given masculinity in showbiz has been all but killed off these past few years with the woke takeover of the entertainment industry.

Babatúndé – rumoured to be paid £65,000 for taking part – is a British actor and comedian who spends his life surrounded by politically correct showbiz types doing the circuit of reality shows like Celebrity Gogglebox and Richard Osman’s House of Games.

His I’m A Celebrity failure – and yes, I’m happy to call it that – was in stark contrast to Love Island star Olivia Attwood and DJ Chris Moyles who faced their fears of being thrown out of a plane at 10,000 feet to enter the jungle.

While Olivia was clearly petrified, after landing on the beach, truly exhilarated, she exclaimed how the challenge was one of the best things she’d ever done. 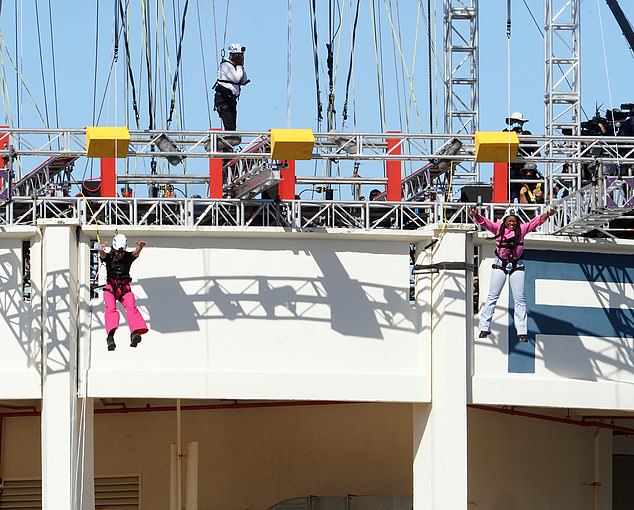 A few years ago, you would have expected the show hosts Ant and Dec to make a few digs about such a cop out, but not anymore; this is the woke world of ITV in 2022 where everyone’s a winner

And surely that’s the spirit we should be embracing on a reality show like I’m A Celebrity: It’s worth facing our fears because the results are usually surprising and powerful.

What a great shame Olivia has been forced to leave Australia after just 24-hours for medical reasons, despite pleading with show bosses to be given another chance.

I thought I would waste my time and money this year voting for that narcissistic delusionist Matt Hancock – the cheating, lying authoritarian former Health Secretary – to take part in every bush tucker challenge going, even though, knowing him, he’ll probably somehow get off on all the negative attention.

But before that disgraceful man enters the jungle and sucks the air out of proceedings, I want Babatúndé to face his fears and prove that embracing his inner masculinity by stoically attempting the challenges he should now inevitably be forced to tackle will result in positive outcomes.

It might not be politically correct to say, but it was a sorry sight to see him whimpering in front of the cameras, while Charlene and Jill triumphed.

It could be seen as a metaphor for the downfall of celebrity blokes lately.

And this sort of thing will happen more often as an inevitable consequence of the entertainment industry continuing to encourage the emasculation of its leading men.