Alan Shepard became the first American to fly in space when he blasted off in May 1961 — then went on to walk on the moon as commander of the Apollo 14 mission in 1971, famously hitting a golf ball during a moonwalk.

Now, more than half a century later, his oldest daughter will blast off to space on a flight of her own. Laura Shepard Churchley is scheduled to launch aboard a Blue Origin New Shepard spacecraft Saturday morning, along with former NFL star and "Good Morning America" host Michael Strahan and four other crewmates.

"I'm excited to kind of be following in my father's footsteps, for starters," said Laura Shepard Churchley in an interview on "Good Morning America." 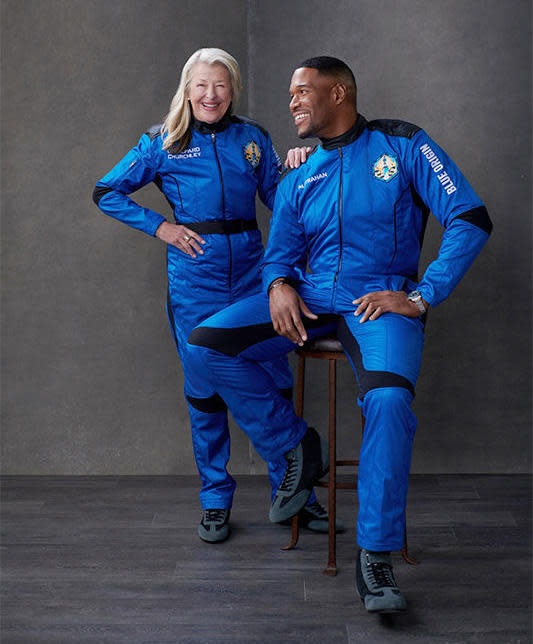 "And I'm excited just to go up into space to see what it all looks like. I've been looking at stars with my father forever, and now we're all going to get really close. And it's just going to be thrilling."

Churchley serves as chair of the Astronaut Scholarship Foundation Board of Trustees, which raises funds and provides mentoring for college students and STEM scholars.

"It's kind of fun for me to say an original Shepard will fly on the New Shepard," she said in a video tweeted by Blue Origin.

“An original Shepard will fly on the New Shepard.” Laura Shepard Churchley, the daughter of the first American in space, will embark on her own journey to space on board #NewShepard on December 9. pic.twitter.com/vQfzTKo1ze

The 19th New Shepard mission — NS-19 — will be Blue Origin's third flight with passengers on board and the first with a full crew of six. In addition to Churchley and Strahan, who are flying as guests of Blue Origin, the crew includes philanthropist Dylan Taylor, investor Evan Dick, Lane Ventures founder Lane Bess and his son, Cameron.

Blue Origin has not announced pricing for the New Shepard or said how much Bess, Taylor and Dick might have paid for their seats.

While Strahan is the "star" of the flight, Churchley's quest to follow in her father's footsteps is generating widespread interest among space enthusiasts and history buffs.

"I'm very proud of my father's legacy," she said in the Blue Origin video. "He was the first American in space and the fifth man on the moon and so far, has been the only man to play golf on the moon. I believe he would say the same thing as my children: Go for it, Laura."

COVID-19 hospitalizations rising in at least 42 states across the U.S.