Singapore: The fears that Indonesia was heading down the same path as India are beginning to come to pass in devastating fashion.

As was the case when the subcontinent became the epicentre of the pandemic in May, south-east Asia’s biggest country is now facing an oxygen supply crisis that has already turned catastrophic. 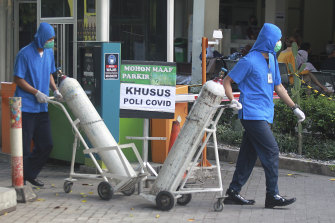 When the liquid oxygen supply ran out at the Dr Sardjito Central General Hospital in Yogyakarta over the weekend, 33 people died before it could be restored.

In Bandung, the Al-Islam hospital closed its doors on Sunday due an oxygen shortage while others were forced to open and close based on supplies.

Indonesia, which recorded yet another high mark of 27,233 new cases and another daily record of 555 deaths on Sunday, does not have the volume of COVID-19 infections and fatalities that engulfed India two months ago when the second most populous nation in the world at more than 400,000 additional cases a day. But with testing levels well below the World Health Organisation standard and a positivity rate as high as 43 per cent in Jakarta, the situation in the fourth most populated country appears to be rapidly deteriorating. 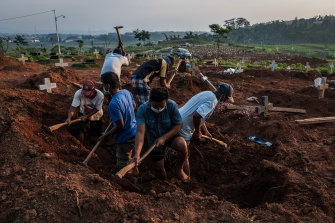 Rukmono Siswishanto, the director of the hospital in Yogyakarta where dozens lost their lives when liquid oxygen reserves were exhausted, said staff had frantically switched to using oxygen cylinders donated by police.

“However, all efforts were too late,” he said.

In another indicator of a health system in danger of collapsing, bed occupancy is at 90 per cent or above in hospitals across Jakarta and three of the five other provinces and special regions on densely populated Java, home to 150 million of Indonesia’s 270 million people.

The consequences have been alarming. Citizen data group Lapor COVID-19 reports that in the month until July 2, 265 have died while isolating or waiting for medical help. In Jakarta alone on Saturday, 45 of the 396 COVID-related deaths in the capital that day occurred at people’s homes.

An armoured vehicle parked at a checkpoint in Jakarta on Monday.Credit:AP

Burial figures in the capital, meanwhile, are 10 times higher than they were on May 1, said Jakarta mayor Anies Baswedan.

In a bid to cope with a sea of new patients, the government of Indonesian president Joko Widodo is frantically allocating more space in intensive care units and setting up emergency tents while bringing in health workers from Sumatra and Kalimantan to Jakarta, where the virus and its Delta variant have been most destructive.

Industrial oxygen gas producers have now been ordered to direct production solely towards the medical sector, with demand rising by nearly 70 per cent since the virus surged again in Indonesia last month, according to Luhut Binsar Pandjaitan, the minister who has been appointed to lead the response to climbing infections in Java and Bali.

“There were problems, that’s right, but we are working around the clock to overcome the problems. We can solve the oxygen issue. I think everything is under control. There is no need to panic,” Luhut said.

“The President asked me last night [about the situation]. I said there’s nothing to worry about if we do our own part.”

With 800 tonnes of oxygen per day now required by the medical sector, prices have more than doubled and it has become common practice for people to line up at markets to refill oxygen cylinders to take home.

Health Minister Budi Gunadi Sadikin had forecast the logistical problems with oxygen delivery on Friday when he told the Jakarta Foreign Correspondents Club that most producers were in West Java and East Java.

On Monday he said an oxygen taskforce had been urgently set up in every province in a bid to direct its supply and transportation based on needs.

“If necessary we will import,” he said.

Joko’s government has been criticised for not acting sooner to impose lockdowns of the kind that have since Saturday been imposed across Java and Bali and are due to be in place until at least July 20.

With a force of 50,000 military and police deployed to ensure restrictions are enforced, the President on Monday again urged people to stay home.

“With unity, we will go through this difficult time together,” he said.