When Scott Morrison chose to start the week by telling us to adjust our mindset, prepare to leave our cave and get back “our freedoms” once 70 per cent of eligible Australians have been vaccinated, he used a lot of words in his prepared remarks: by my count, 1139 of them.

But one word didn’t make it. 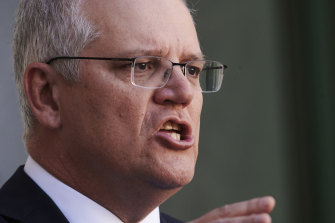 There was one word that the Prime Minister did not use when raising the prospect of Australia needing to open up.Credit:Getty

He said that at above the magical 70 per cent mark, cases of COVID-19 would not be the issue.

“Dealing with serious illness, hospitalisation, ICU capabilities, our ability to respond in those circumstances: that will be our goal and we will live with this virus as we live with other infectious diseases,” the PM said.

You might have expected the word “deaths” to be included in that list, because when you open up a society with more than one in four “eligible” people unvaccinated, some are bound to die from the virus. The Treasurer Josh Frydenberg acknowledged this last week.

But from the Prime Minister, deaths didn’t get a mention.

On his telling, it’s all upside because the national plan is relying on modelling by the Doherty Institute and the best possible scientific, medical and economic advice in the world. The Doherty modelling, which has been embraced to varying degrees by the states and territories, is now treated as holy writ.

The message being sold is that happy days are around the corner: once we hit the 70 and 80 per cent mark of vaccinations, there will only be “common sense” rules. We’re still a fair way from the 70 per cent target, but the PM is trying to get out well ahead, setting himself up as the man who will lead us out of lockdowns, and away from chicken-hearted state dictators.

Is it guaranteed to work? The world doesn’t need another journalist play-acting as an epidemiologist, but my reading of the Doherty modelling is that even with 80 per cent vaccination coverage, if conventional health measures built around track and trace are at even mildly reduced efficiency because of high COVID caseloads, the community would spend 31 per cent of its time under strict lockdowns.

I hope I’ve misread it, but I note that mathematical epidemiologist Allan Saul, from the Burnet Institute, made a similar point in an interview on the ABC’s Health Report this week. 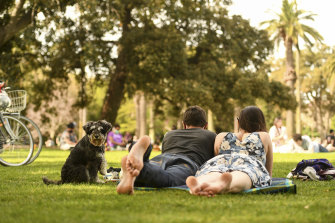 Using “common sense” about living with COVID suggests we can make up our own rules.Credit:Penny Stephens

The practical problem with Morrison’s effusive rah-rah talk about opening up and “living with the virus” is that when it’s overdone, as it was on Monday, it risks encouraging too many people to assume that soon they can go back to the way they lived in 2019.

“Common sense” is a ridiculous term because it carries the suggestion that we can make up our own rules. With the Delta variant out there, we’re still going to need rules based on science, not how we feel.

And as for the prime minister’s rhetorical avoidance of the mortal consequences of reopening when so many Australians will still be unvaccinated: just take a break from spruiking and be straight with us of your own volition. Daniel Andrews publicly acknowledges that people will die. So does Gladys Berejiklian.

We need only look at the Britain to see what can happen when a reopening is subject to too much boosterism. Boris Johnson, who admittedly foreshadowed a rise in deaths, encouraged the English to see July 19, when many restrictions were lifted, as Freedom Day. 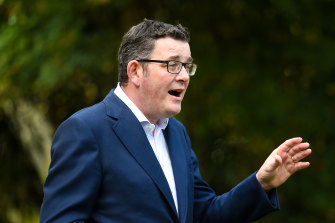 When Freedom Day came, 68 per cent of UK adults had been fully vaccinated, and there were 40,000 new cases and 31 deaths. Since then, the death rate has climbed, despite the sort of vaccination coverage we’re aiming for – now, 87 per cent have had their first jab and 76 per cent have had two jabs.

I’m not suggesting the outcome would be the same here, but the numbers are sobering.

Morrison has made it plain he will be railing against lockdowns once the 70 per cent vaccination target is reached because he says they will be doing more harm than good.

It’s a shame he didn’t accompany this unilateral declaration with a pledge to expedite the vaccination of Australians aged under 16, initiate a speedy program to help the states and territories improve ventilation in schools, and deliver a genuine legislative solution to enable employers to mandate vaccinations for their employees. And told us how vigilant we’ll have to be about warding off the virus once our freedoms return.

Running right through the pandemic has been the question about what our society is for and how much we should sacrifice for each other.

Soon we’re going to find out how many of our people we’re willing to surrender to the mortuary or the horrors of long COVID so that the rest of us can live outside our “cave”.

We could use a national leader to help us with that.

Shaun Carney is a regular columnist.