Washington: Beto O'Rourke has announced he is dropping out of the Democratic presidential race.

The former Texas congressman announced the move in an email to supporters, with no warning.

"Though it is difficult to accept, it is clear to me now that this campaign does not have the means to move forward successfully," he wrote. "My service to the country will not be as a candidate or as the nominee." 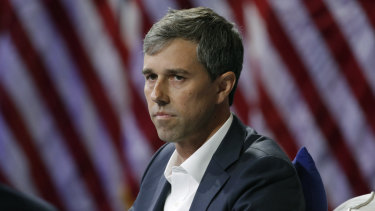 Democratic presidential candidate and former Texas Representative Beto O’Rourke listens during a gun safety forum in Las Vegas earlier this month. He has now confirmed he’s out of the 2020 race.Credit:AP

Pulling the plug now, he wrote, is in the best interest of campaign staff and the party and its eventual nominee.

O'Rourke likely would not have scored an invitation to participate in the next televised debate, on November 20 in Atlanta. He had chalked up only two of the four polls needed to qualify and with tepid support, hitting the threshold set by the party by the deadline, November 13, was unlikely.

The anti-climactic and abrupt end came a year after he electrified Democrats in Texas and nationwide as a US Senate nominee last November, holding Senator Ted Cruz below 51 per cent and coming within 2.6 per cent of ending the GOP's grip on statewide office in Texas. He raised $US80 million for that race and came closer than any Democrat in Texas since 1994 to winning statewide.

The buzz he generated in that race turned into a siren song, and he heeded it, after some hesitation and a much-mocked solo road trip that he journaled online as he weighed his options.

In March, he plunged into the presidential race, already among the leading contenders.

But the "Betomania" didn't last long.

With no statewide office under his belt, his resume paled besides those of other competitors.

His prospects already flagging, he took a two-week hiatus from traditional campaign activities after the August 3 massacre at an El Paso Walmart that left 22 people dead, attending funerals, consoling families and his community, and serving as the city and border's unofficial spokesman as national attention focused on gun violence and the apparent hate crime.

Rivals lauded the leadership he showed during that episode but distanced themselves from his full-throated advocacy for mandatory buybacks of assault weapons – his "Hell yes" declaration at a debate in Houston six week after the rampage, affirming his plan to ban AK-47s and AR-15s.

The O'Rourke campaign gave no hints ahead of the decision that he was even toying with such a move.

Only hours earlier, the campaign had announced that he would visit New Hampshire next Friday to file paperwork for the first-in-the-nation primary, and make his pitch that morning at the Politics and Eggs breakfast, a rite of passage for serious presidential contenders.