Julian Assange’s father and brother have led a small but eclectic group of protesters that tried to create a human chain around Flinders Street Station on a day of international action calling for the WikiLeaks founder’s release from a British prison.

Assange’s father John Shipton, who spoke at the station on Saturday, asked the British and US governments to “obey their own laws”. 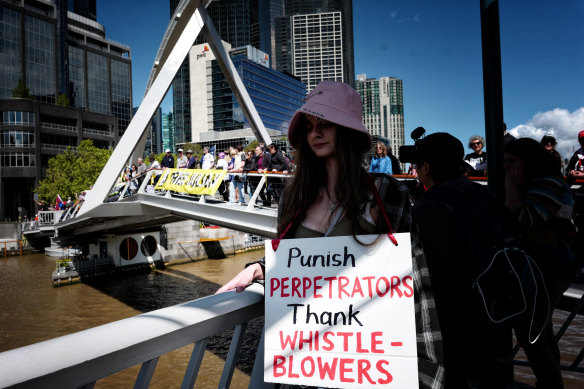 “If they do, Julian would be here speaking and thanking you rather than me,” Shipton told the crowd on Princes Bridge.

Assange is appealing against the British government’s approval of his extradition to the US in June to face charges relating to the WikiLeaks cables he published more than a decade ago.

Protesters in Melbourne planned to create a human chain which would have wrapped around Flinders Street Station, crossed the Yarra on a footbridge, before eventually snaking its way back along Southbank to connect on Princes Bridge.

However, despite the crowd blocking off Swanston Street at around midday, there were not enough people to link arms and complete the circle.

Assange’s case has drawn an eclectic group of advocates to his cause.

At Saturday’s rally, an Amnesty International representative performed a Welcome to Country in front of modest crowd which included one person waving a “Trump 2020” flag and a man with a red cap which read: “Make Victoria Great Again”.

The rally, which eventually travelled down St Kilda Road to Government House, had also been included on the schedule of an anti-vaccine mandate protest, and a large proportion of the crowd appeared to be from that side of politics.

At one point during Saturday’s proceedings, a man wearing a “Free Assange” shirt stormed away from the protest, complaining he had been abused for wearing a facemask. 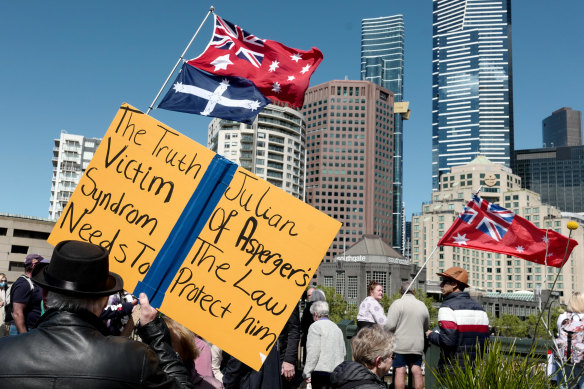 “F— off,” he told a fellow demonstrator wearing a full army uniform.

Assange published sensitive US government documents on his WikiLeaks website more than a decade ago, which American prosecutors allege he helped US Army intelligence analyst Chelsea Manning steal.

The US says Assange put lives at risk, while his supporters say he is a fearless journalist who exposed US military wrongdoing in Iraq and Afghanistan.

The Australian has been imprisoned in Britain since 2019 after spending years in the small Ecuadorian embassy in London to avoid extradition.

Assange’s brother, Gabriel Shipton, said Saturday was an international day of protest, with the main rally being held outside the British parliament.

“It’s a critical time in Julian’s extradition case. We have a potential decision on whether the High Court will hear the appeal coming up in November. So, now is a pretty good time for everyone to see the support that’s out there for Julian,” he said.

Rallying in support of Assange was Defence whistleblower David McBride, who faces an ACT court in late October as he is pursued by federal prosecutors for blowing the whistle about war crimes allegedly committed by Australian soldiers in Afghanistan.

McBride said he was feeling confident about his upcoming trial and the lawyer in him thought it would “set a bad precedent” if the charges were dropped because he believed the court could scrutinise the public interest in his actions. 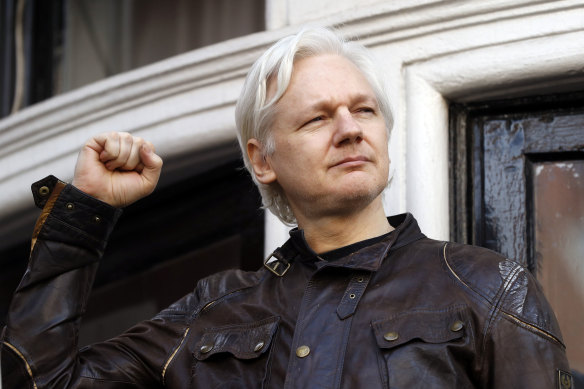 “Support has grown, so I’m pretty happy now about facing trial. And I think it’s actually good to see the issues looked at by a judge, and we’ll see what happens,” he said.

McBride added he would continue to campaign to free Assange.

Assange’s brother, Gabriel, said the Assange saga was an issue of principle which brought a diverse group of people together.

”I’ve never seen [Greens leader] Adam Bandt and [Nationals senator] Matt Canavan sit next to each other on an issue.

“But when we had a Friends of Julian Assange group meeting in Canberra, I saw Adam Bandt and Matt Canavan sitting next to each other,” he said.