CONTROVERSIAL US presidential candidate Donald Trump was cheered by supporters as he left Trump Towers in New York on Saturday – just hours after his wife Melania slammed his comments in a sex boast video from 2005 as "unacceptable and offensive".

she found the remarks offensive – but did not represent her husband. 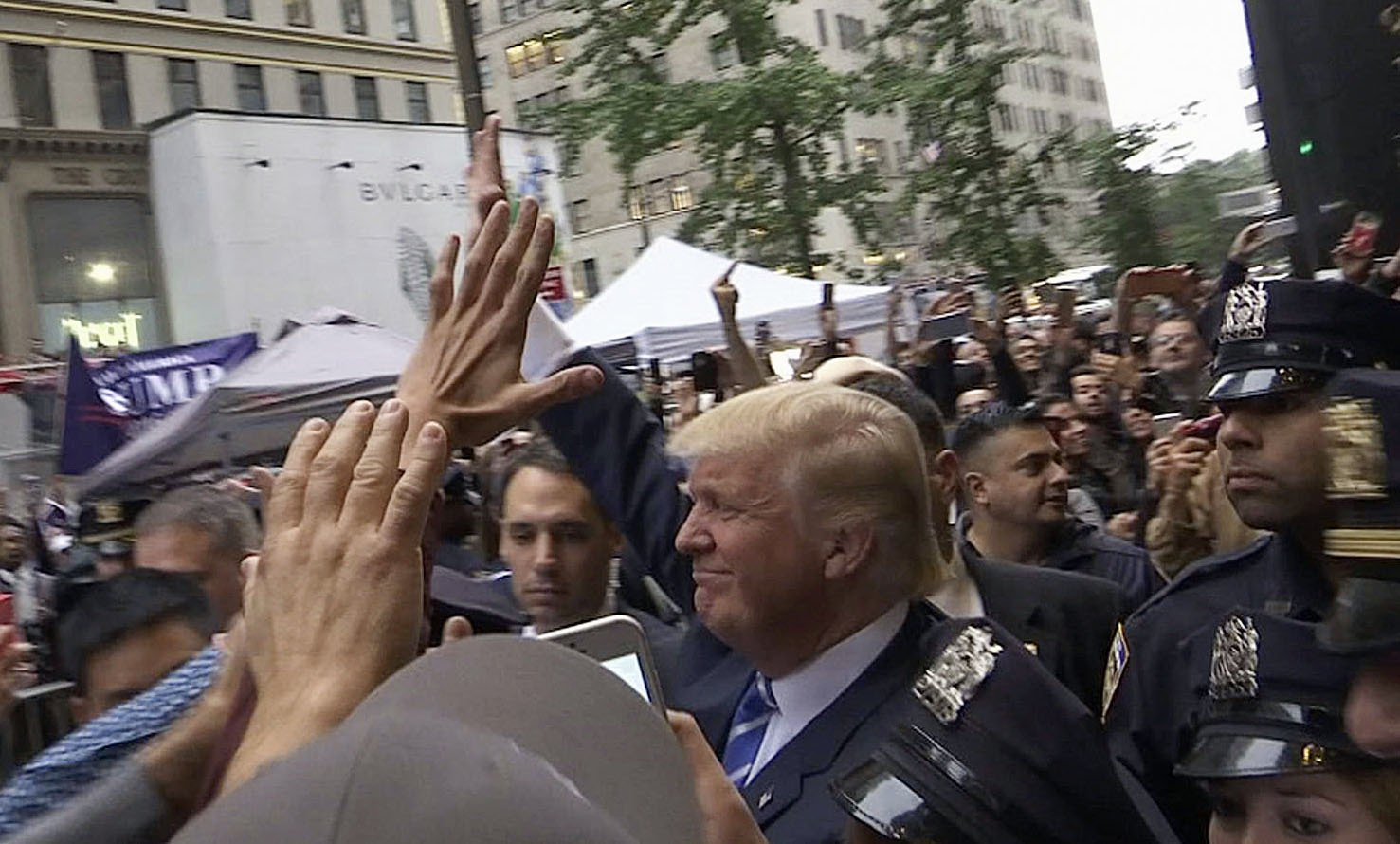 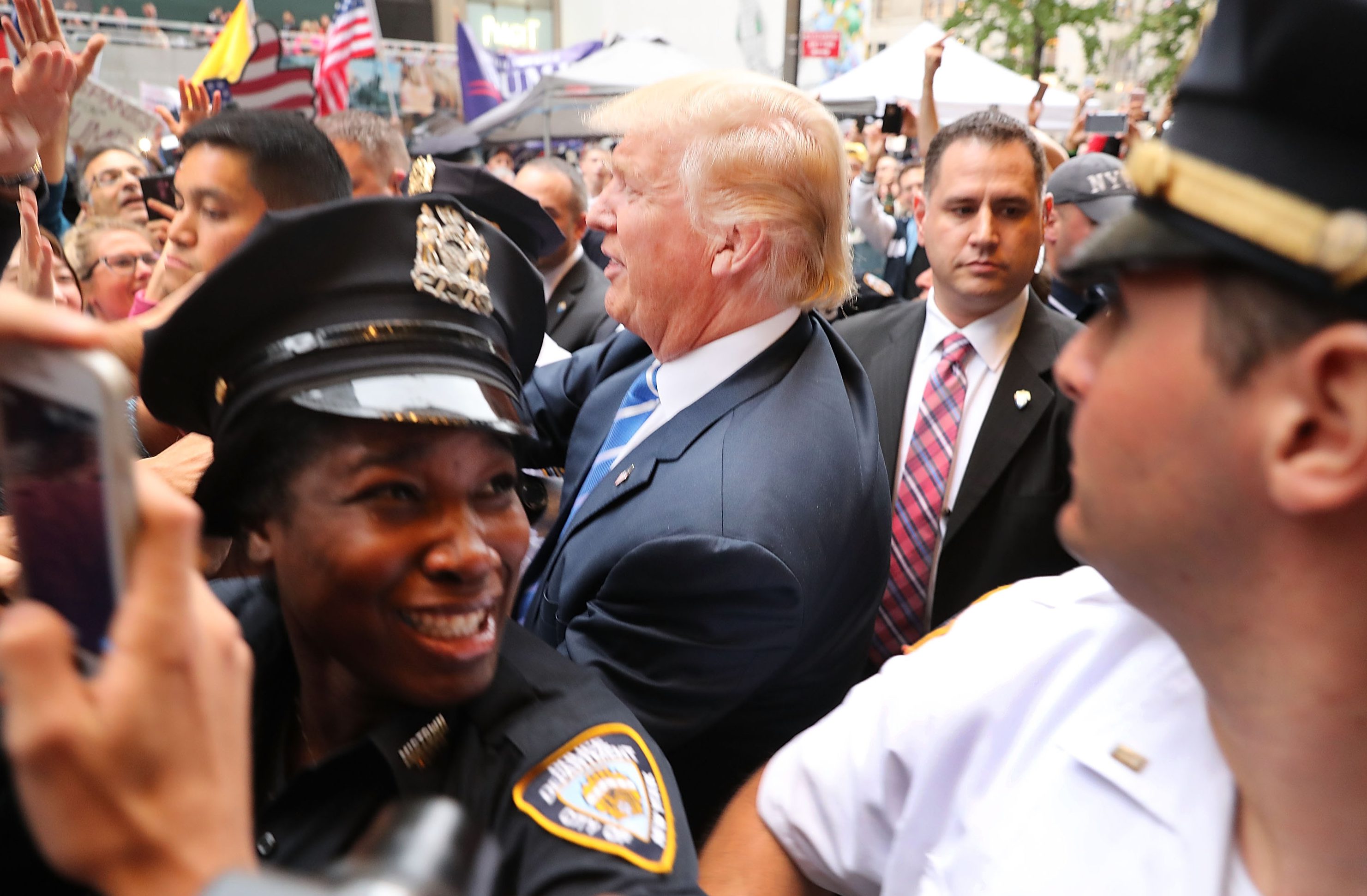 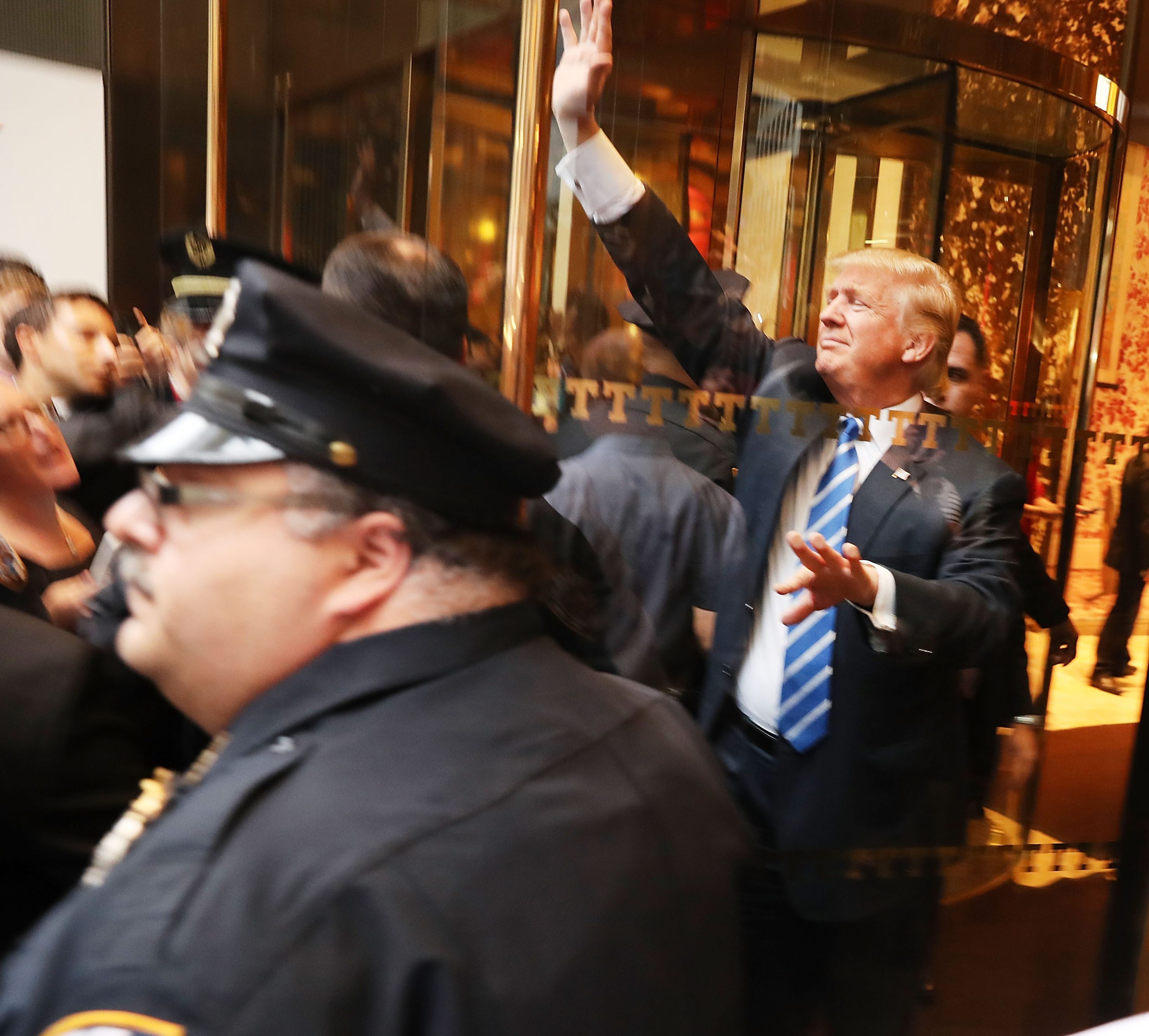 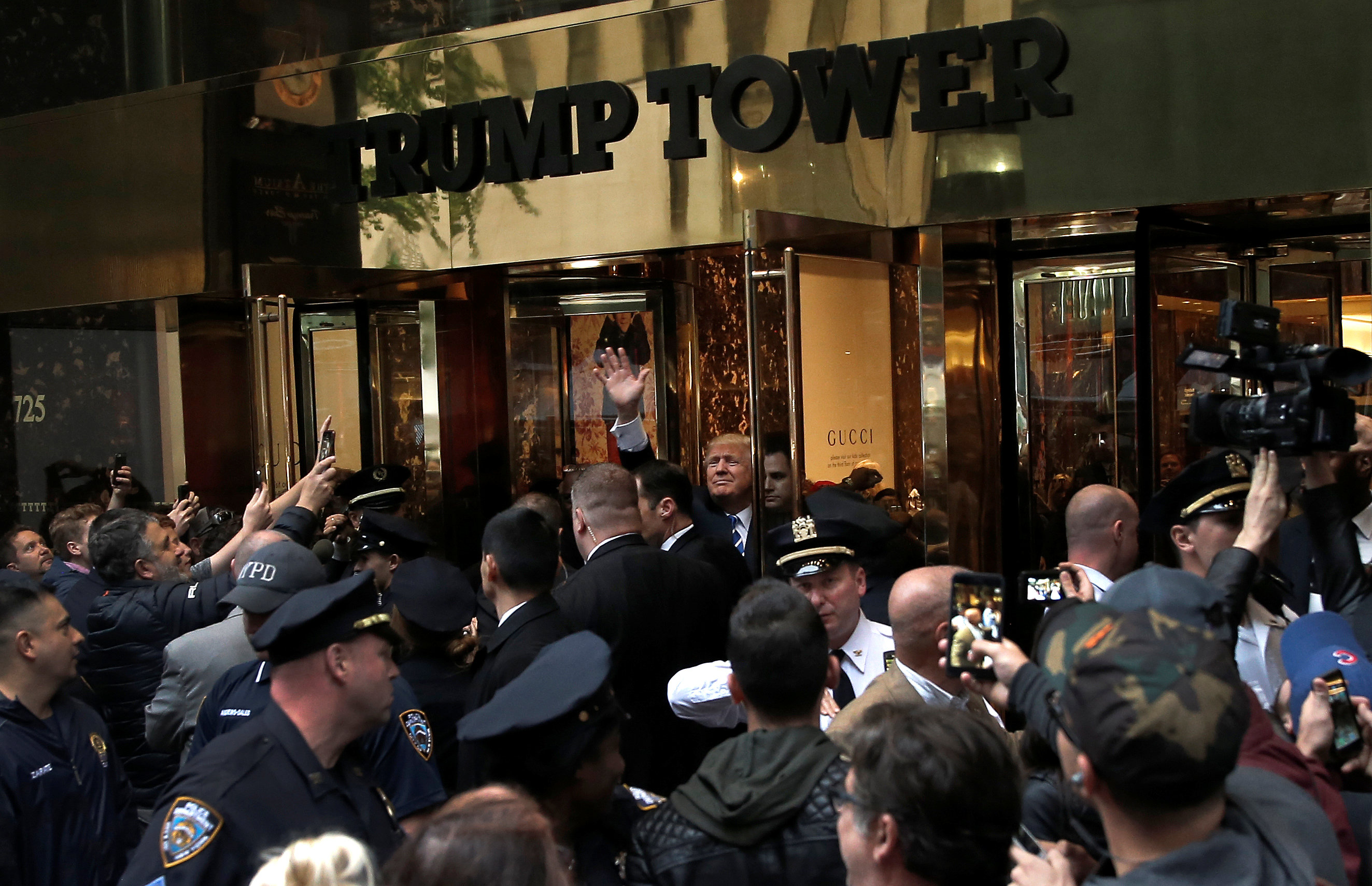 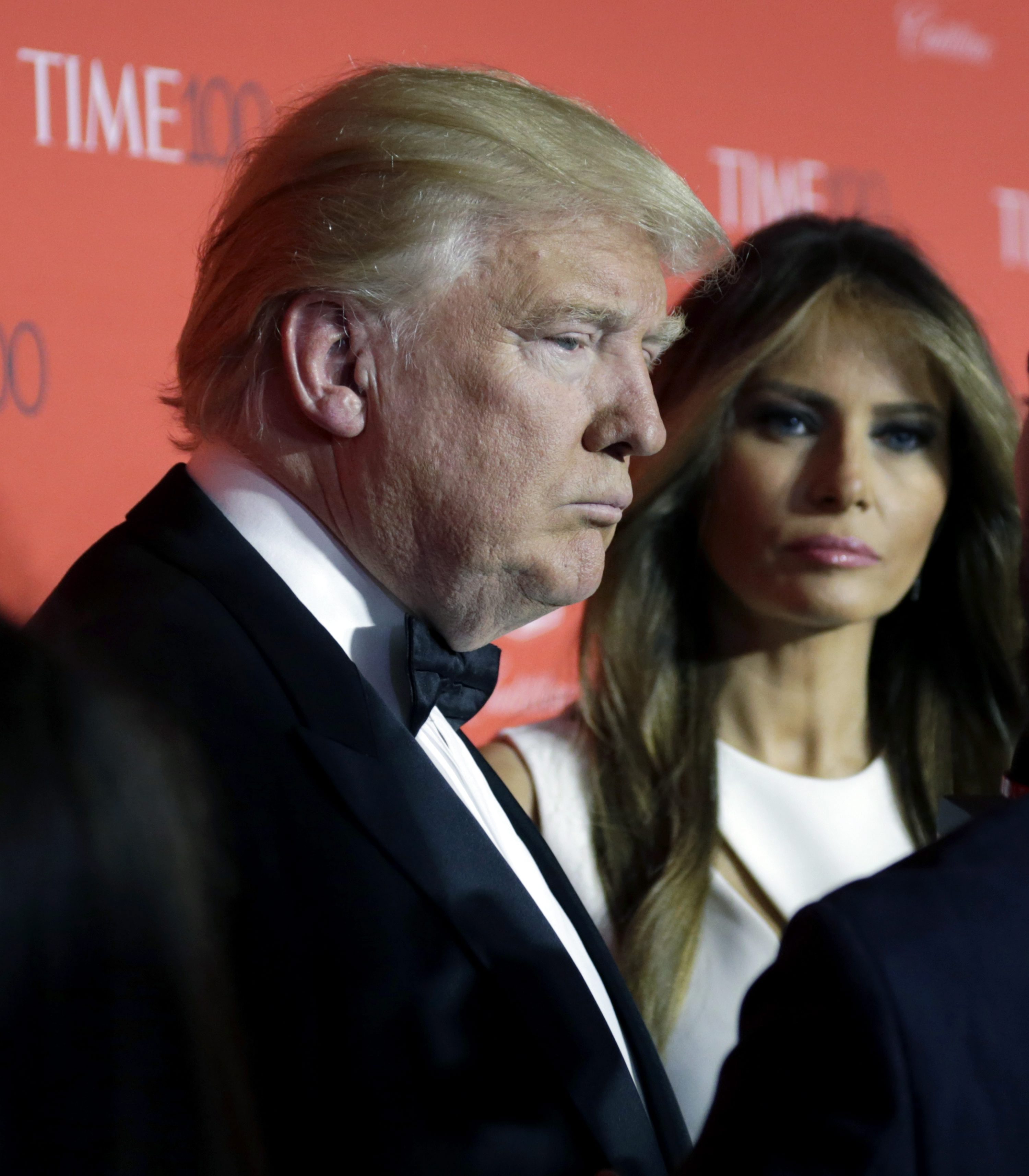 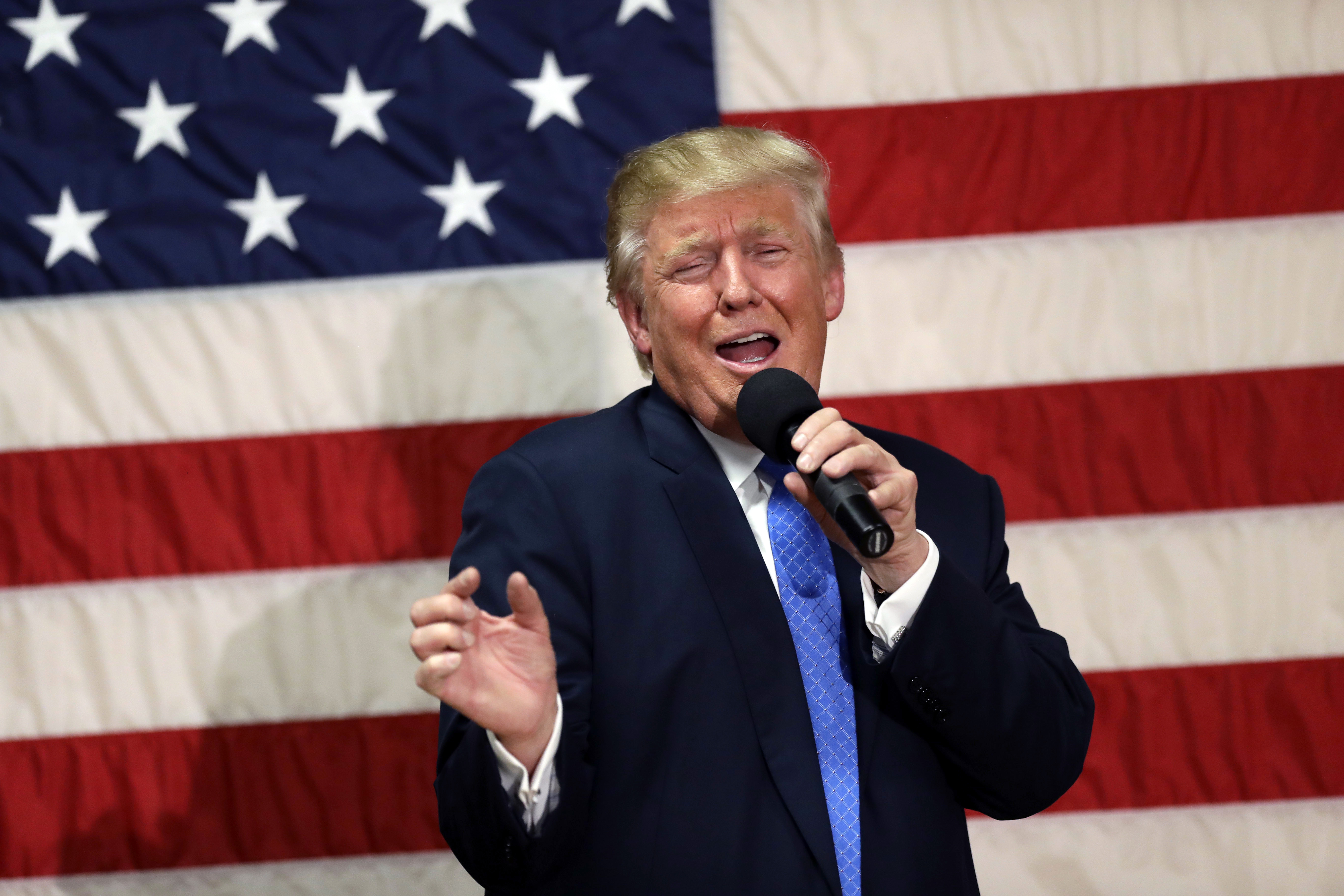 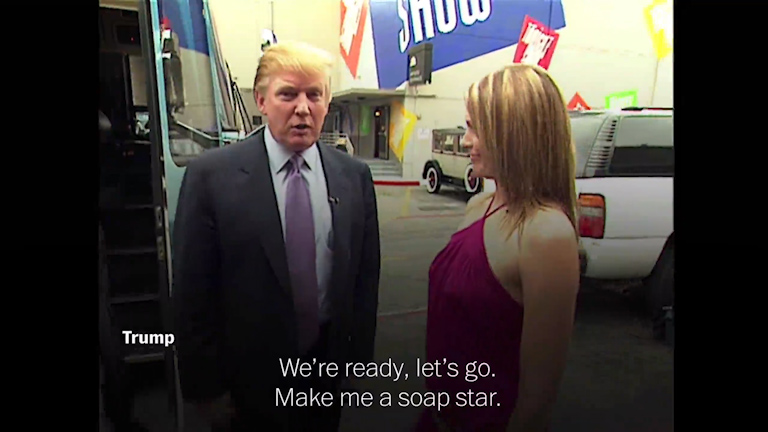 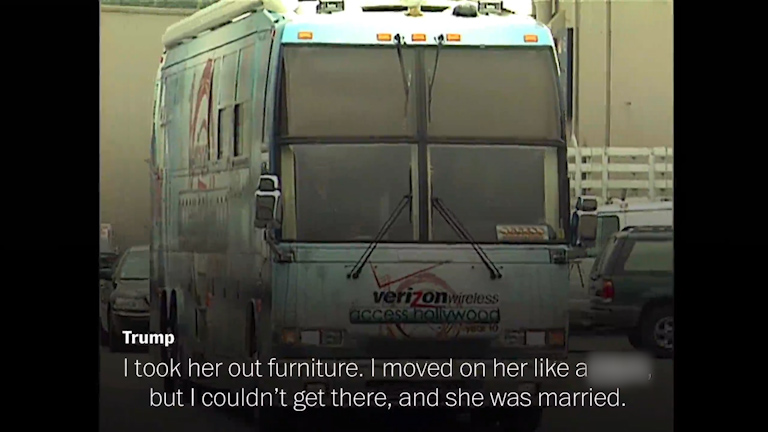 The Republican candidate greeted fans outside the glamorous Manhattan skyscraper, unfazed by the fact many prominent members of the party are calling for him to drop out of the race.

His public appearance came after his ex-model wife Melania Trump released a statement saying she found the remarks in the video "offensive".

She said on Saturday: "The words my husband used are unacceptable and offensive to me. This does not represent the man that I know. He has a heart and mind of a leader." 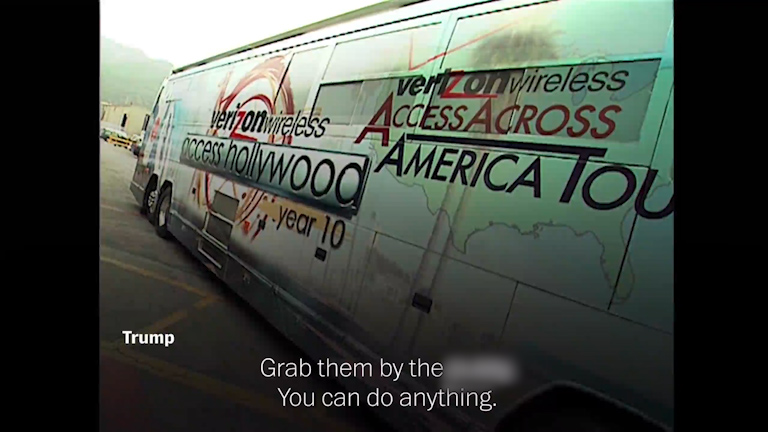 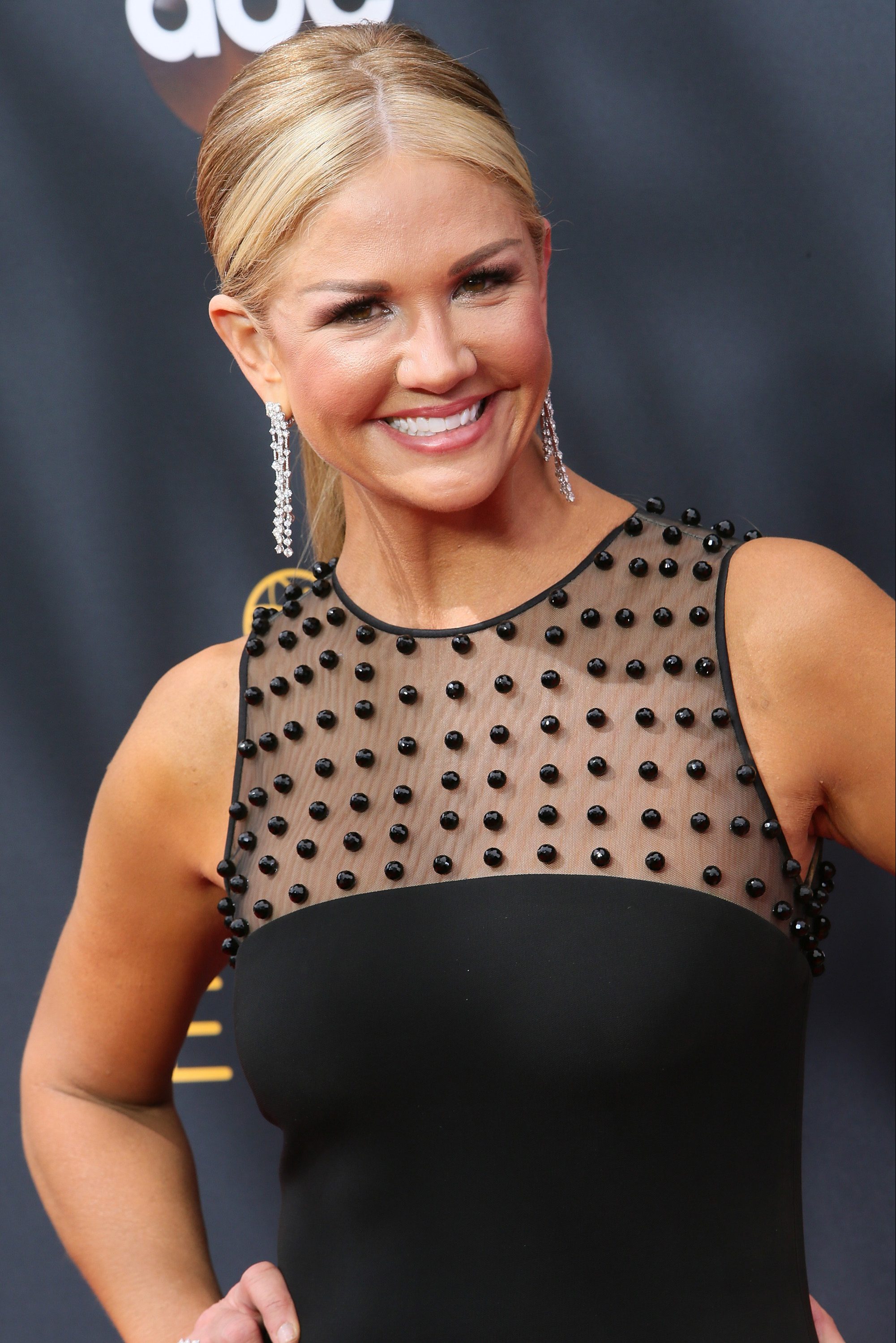 Urging US citizens to forgive the Republican candidate, she added: "I hope people will accept this apology, as I have, and focus on the important issues facing our nation and the world."

Following the release of the recording, Trump said he was sorry "if anyone was offended" by his comments – before issuing another video apology in the face of intense criticism.

He said: "I've said and done things I regret, and the words released today on this more than a decade-old video are one of them.

"Anyone who knows me knows these words don't reflect who I am. I said it, I was wrong and I apologise.

"I pledge to be a better man tomorrow and will never, ever let you down."

Yesterday it emerged the married woman who was the subject of lewd comments made by Trump has been identified as former Access Hollywood host Nancy O'Dell.

Now, it has also been revealed Trump attempted to fire O'Dell just two years later from her role as host of "The Miss USA Pageant" – because he didn't want a pregnant woman hosting the show.

Today Trump told the Wall Street Journal there was "zero chance I'll quit" following the release of the video – despite his running mate Mike Pence claiming he was "offended" by the comments in it.

Trump said: "I’d never withdraw. I’ve never withdrawn in my life. No, I’m not quitting this race. I have tremendous support. People are calling and saying; ‘Don’t even think about doing anything else but running’," he later told the Washington Post. 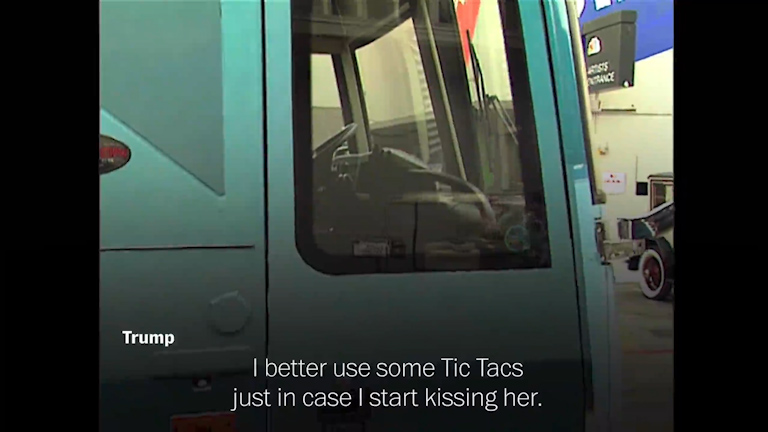 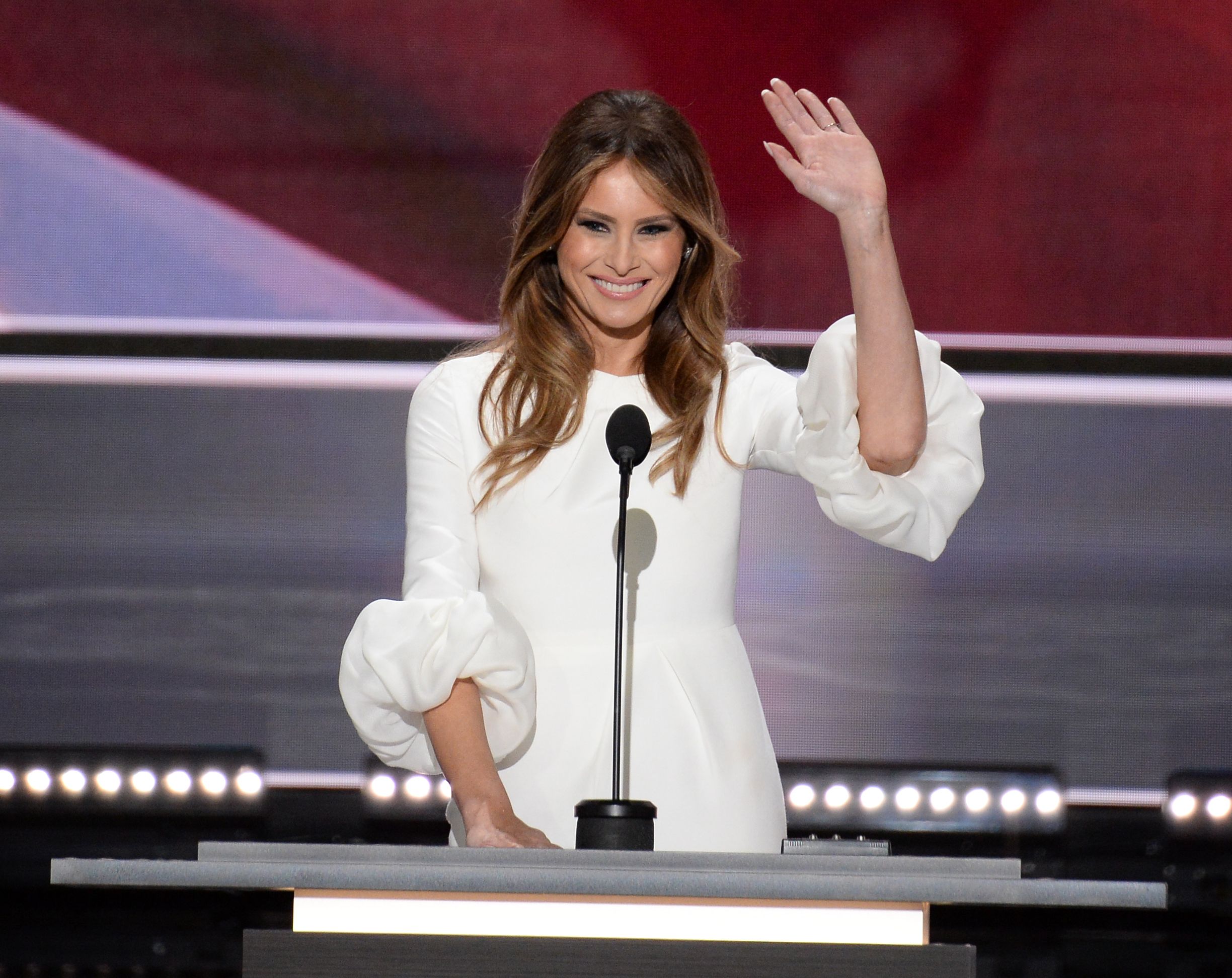 "They’re not going to make me quit, and they can’t make me quit. The Republicans, you’ve got to remember, have been running for a long time. The reason they (the Democrats) don’t win is because they don’t stick together."

In a statement, Governor Mike Pence, who is running alongside Trump for the job of vice-president, said: “As a husband and father, I was offended by the words and actions described by Donald Trump in the eleven-year-old video released yesterday.

“I do not condone his remarks and cannot defend them.

“I am grateful that he has expressed remorse and apologised to the American people.

“We pray for his family.”

The video recording from Access Hollywood, posted on The Washington Post, was filmed in 2005 to promote Trump's upcoming appearance on the US soap 'Days of Our Lives'. 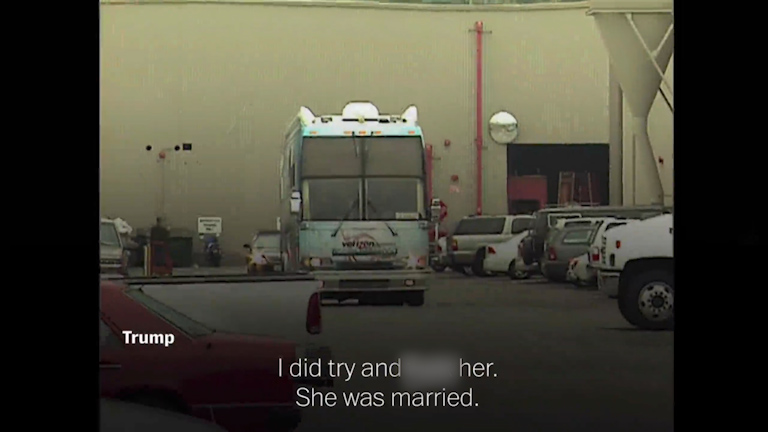 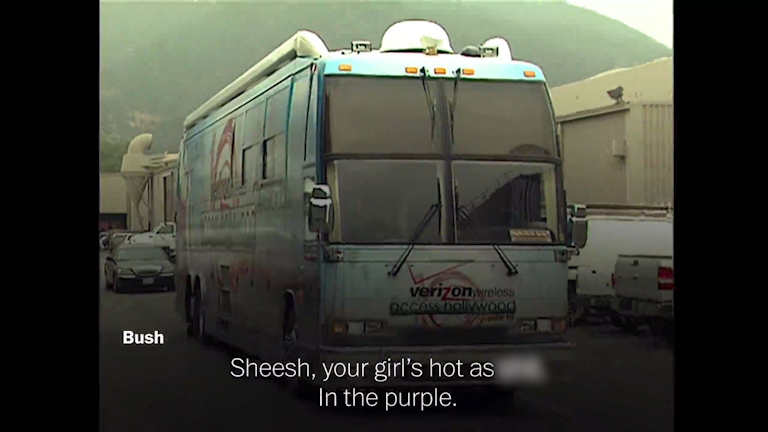 Speaking to presenter Billy Bush, the recording features audio of Bush and Trump’s conversation inside the bus, as well as audio and video once they emerge from it to begin shooting the segment.

During the audio, which was recorded months after he married his third wife, Melania, Trump can be heard talking candidly about how his failed attempt to seduce an unnamed woman – who has since been identified as Nancy O'Dell.

Trump, who tonight faces White House rival Hillary Clinton in the second presidential debate, added: "And I moved on her very heavily.

“In fact, I took her out furniture shopping.

“She wanted to get some furniture.

“I said, ‘I’ll show you where they have some nice furniture.’”

“I moved on her like a bitch, but I couldn’t get there.

“And she was married."

After noticing  Arianne Zucker, the actress who is waiting to escort them into the soap opera set, Trump is then heard saying 'Woah'. 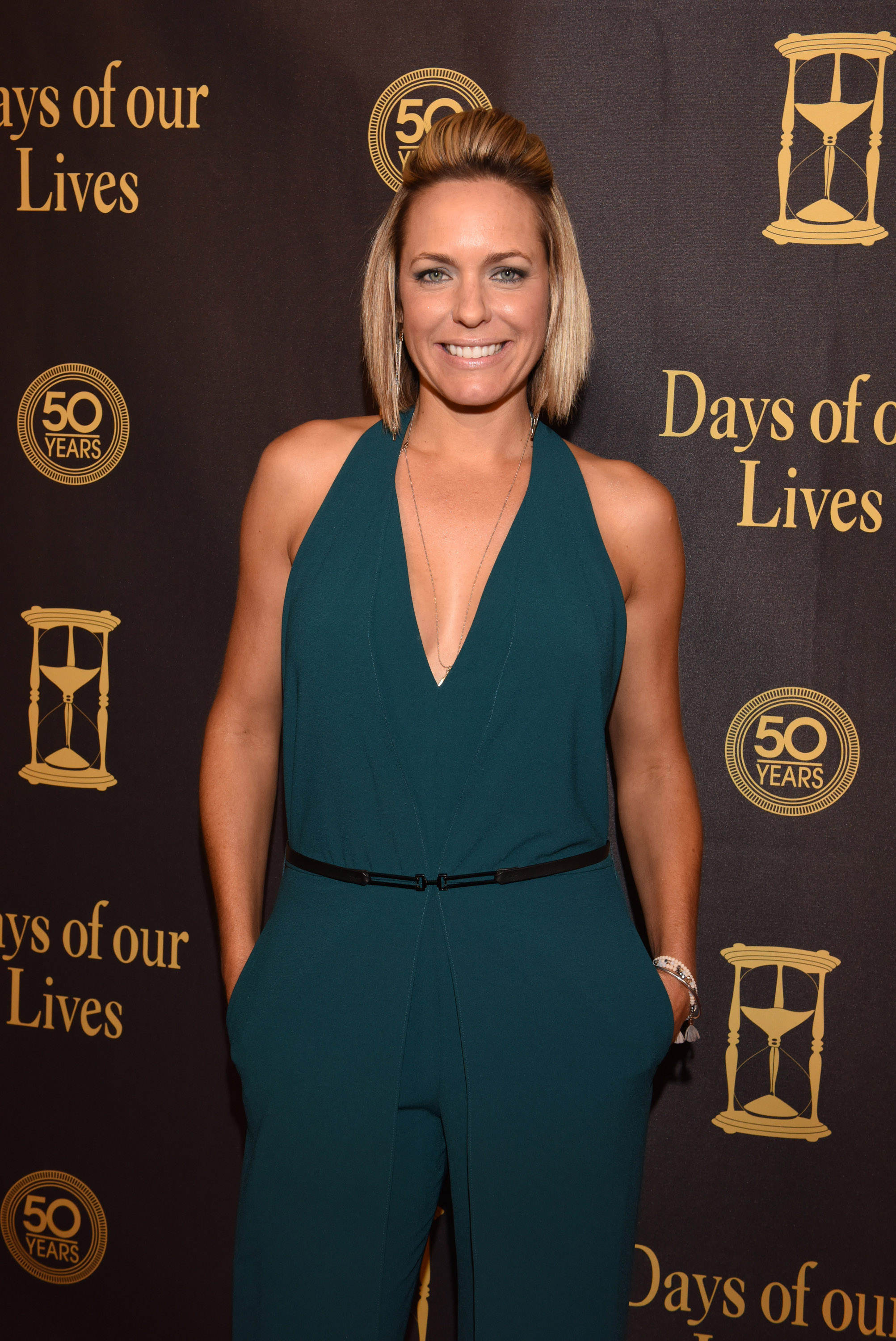 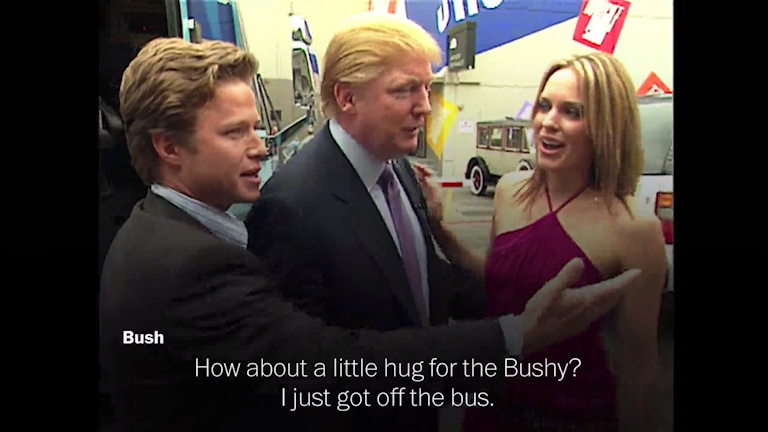 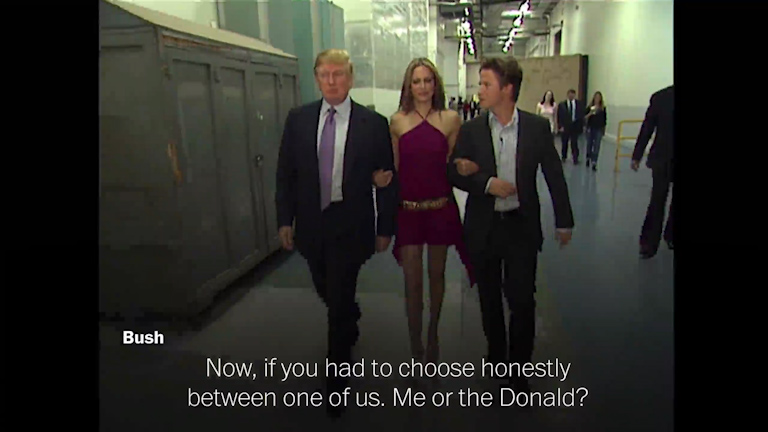 He adds: "I’ve gotta use some tic tacs, just in case I start kissing her.

"You know I’m automatically attracted to beautiful, I just start kissing them.

"It’s like a magnet. Just kiss. I don’t even wait.

"And when you’re a star they let you do it.

"You can do anything."

When questioned about his last comment, the Republican presidential nominee says: "Grab them by the p***y.

"You can do anything." 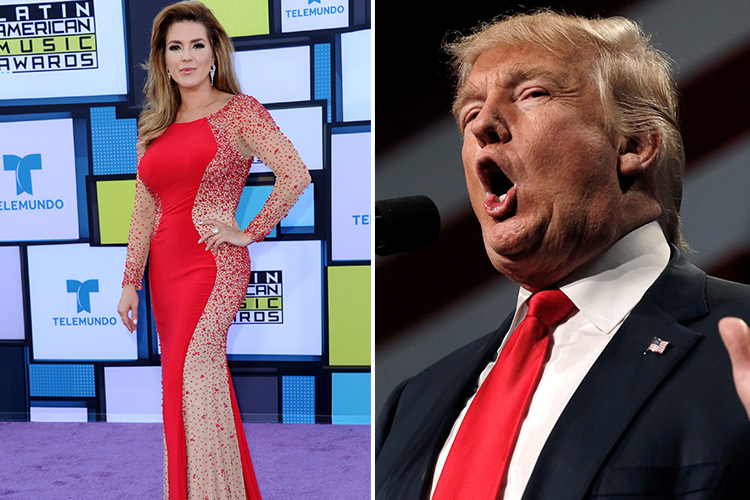 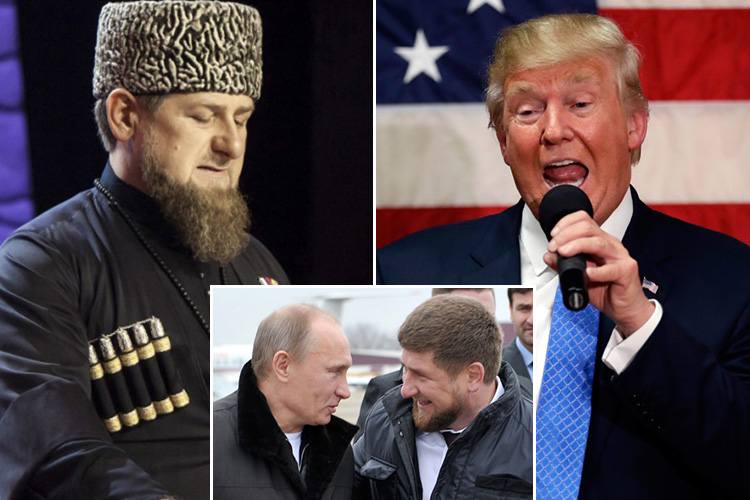 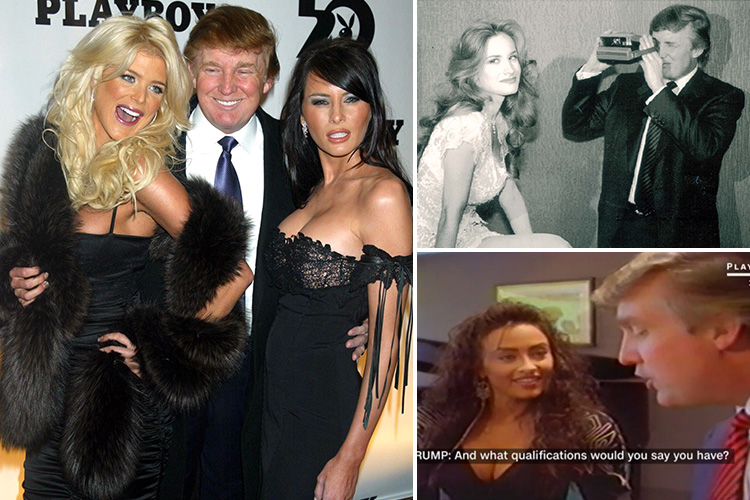 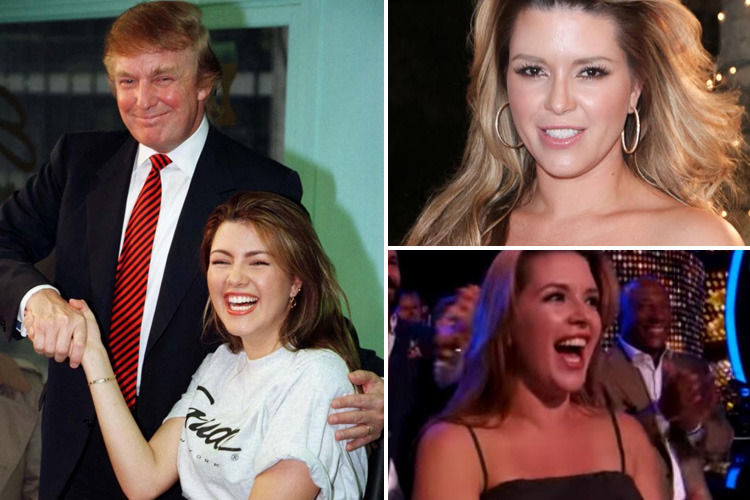 In an initial statement Trump said: "This was locker room banter, a private conversation that took place many years ago.

"Bill Clinton has said far worse to me on the golf course – not even close.

"I apologise if anyone was offended."

He then released an updated response in the face of a fierce backlash.

Hillary Clinton, the Democrat nomination for the White House, tweeted to say his comments were 'horrific':

And Trump was also heavily criticised by members of his own party – who called upon him to stand down.

In a video on Facebook, Utah Sen. Mike Lee said: It’s occurred to me on countless occasions today that if anyone spoke to my wife or my daughter or my five sisters like the way Mr. Trump has spoke to women, I wouldn’t hire that person, I wouldn’t want to be associated with that person."

Rep. Barbara Comstock added: "In light of these comments, Donald Trump should step aside and allow our party to replace him with Mike Pence or another appropriate nominee from the Republican Party.”

Meanwhile, a source told the Associated Press that Trump's running mate, Mike Pence, was "beside himself" – while his wife was furious.

Jeb Bush, who for a short time went up against Trump to be the Republican candidate, also tweeted and said "no apology" could excuse his behaviour:

The presenter in the video, Billy Bush, is  the nephew of former president George H.W. Bush, and first cousins with George W. and Jeb Bush.

He can be seen asking Ms Zucker for a 'little hug for Bushy'.

According to the Post, in a statement released by NBC Universal, Mr Bush said: "Obviously I’m embarrassed and ashamed.

"It’s no excuse, but this happened eleven years ago, I was younger, less mature, and acted foolishly in playing along.

ACTOR Robert De Niro has blasted Donald Trump, calling him “blatantly stupid” and saying he wants to “punch him in the face”.

Oscar-winner De Niro, 73, was taking part in a video campaign to get people to vote in next month’s election.

The clip was not used in the final edit of the campaign but was shown on US TV.