There are now less than two months until voters to go to the polls in the US. President Donald Trump has stood by his strategy ion holding mass rallies to try win over support despite the coronavirus crisis.

The incumbent’s campaigning style set the tone of the 2016 election, with thousands of supporters turning up to organised campaign events to hear the Republican speak.

The current pandemic has not stood in the way of the President holding his mass rallies, with fans gathering in outdoor venues at airport hangers to hear their candidate speak.

Dubbed as ‘peaceful protests’, the rallies have been used by Donald Trump to attack Joe Biden for failing to stand up to rioters demonstrating against racial inequality in the US.

The President has uses the campaign trail to accuse Joe Biden and this running mate, Kamala Harris, of supporting rioting and has warned of violence breaking out across the US should they be elected to the White House. 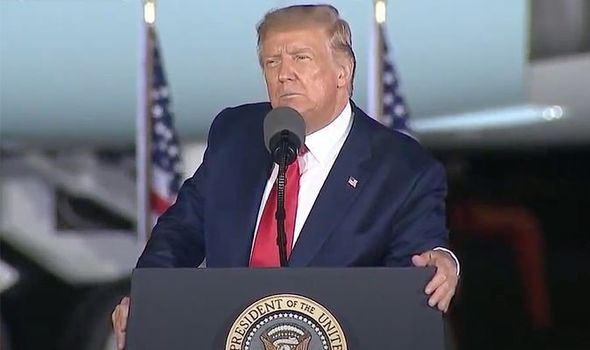 23.25pm update: Michigan a vital state for both Trump and Biden

Michigan is a crunch state for Donald Trump and Joe Biden in November’s election.

Since then it has always turned blue. Winning back the state later this yer will be an important task for the Democratic candidate if he is to launch a serious challenge for the presidency.

23.11pm update: An hour to go until Trump speech

The President’s rally is due to start at 7pm EDT (12am BST), however he is often late to start addressing the onlooking crowd.

The Repuvlican 2020election candidate will likely begin to speak to his supporters in about an hour.

Ahead of the US election, Twitter has said it is expanding its misinformation rules.

Twitter Inc said on Thursday it would label or remove misinformation aiming to undermine confidence in the US election, including posts claiming victory before results have been certified or inciting unlawful conduct to prevent a peaceful transfer of power.

Twitter said in a blog post it was updating its rules to recognise the changes in how people will vote in the Nov. 3 election and try to protect against voter suppression and misleading content on its platform.

The widespread use of mail ballots in the U.S. election due to the coronavirus pandemic will likely cause significant delays in tallying results, which some experts fear could allow misinformation to gain traction.