Washington: Donald Trump has become the first former US president to face criminal referrals from a Congressional committee, after a damning probe into last year’s Capitol riot recommended prosecution for insurrection, conspiracy, false statements, and obstruction.

In a significant but mostly symbolic move, the January 6 Select Committee wrapped up its final business meeting before being disbanded by voting to make the referrals to the Justice Department, placing Trump at the centre of one the most extraordinary assaults on democracy in American history. 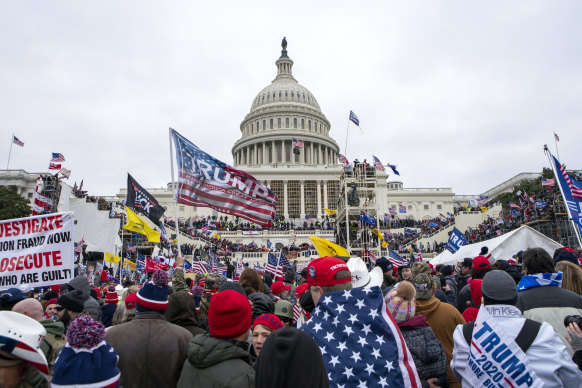 Rioters loyal to President Donald Trump rally at the US Capitol in Washington on January 6, 2021.Credit:AP

“If we are to survive as a nation of laws and democracy, this can never happen again,” the Committee’s Democratic chairman, Bennie Thompson, warned on Monday (US time).

The referrals against the twice-impeached president include four key charges: inciting or assisting an insurrection; obstruction of an official proceeding; conspiracy to defraud the United States; and conspiracy to make a false statement.

The committee has also charged other key Trump allies with ethics violations, for failing to comply with subpoenas issued by the committee.

Four members of Congress will now be referred to the ethics committee as a result: Republican minority leader Kevin McCarthy, and congressman Scott Perry, Jim Jordan and Andy Biggs.

However, this is also merely symbolic because the committee is evenly split between Republicans and Democrats, and there are only a few days left before the new Congress begins, which will change the membership of the committees across both chambers.

While the January 6 committee’s decision does not hold any legal weight or require the Justice Department to take any action, it nonetheless sends a powerful sign that it believes the former president committed certain crimes and must be held to account.

The referrals are also a key moment in one of the most consequential Congressional probes in history, which began shortly after Trump supporters stormed the US Capitol on January 6 last year. They followed the urging of the newly defeated president who told them to “fight like hell” to stop Biden’s victory from being certified. Five people died as a result of the attack, and about 140 law enforcement officers were injured.

According to the committee’s findings – some of which were unveiled today ahead of a lengthy full report to be released later this week – Trump’s attempt to subvert the 2020 election was part of a multi-part, coordinated and premeditated plan. Elements included concocting an elaborate scheme to use fake electors to flip the 2020 election; attempting to corrupt his own Justice Department by pushing top law enforcement officials to cast doubt on the results; pressuring his vice president to stop Joe Biden’s election victory from being certified; and ignoring family and top aides who disagreed with his view that he could overturn the election results. 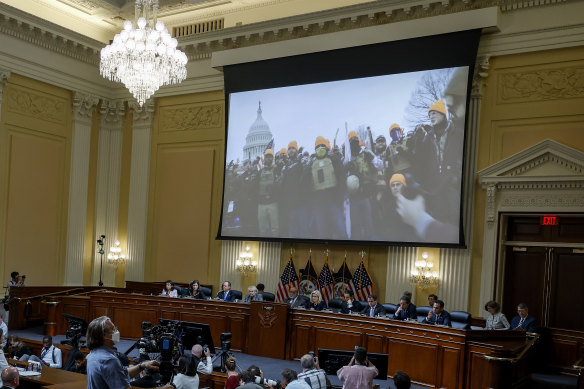 The January 6 committee has referred Trump for criminal investigation.Credit:Getty

“In summary, President Trump lit the flame. He poured gasoline on the fire and sat by in the White House dining room for hours watching the fire burn, and today still continues to flag to fan those flames. That was his extreme dereliction of duty,” said Democratic member Elaine Luria.

Trump – who last month announced his plan to run for the White House again in 2024 – has consistently claimed he is a victim of a witch hunt and has been using this narrative to fundraise for his campaign.

“Republicans and Patriots all over the land must stand strong and united against the Thugs and Scoundrels of the Unselect Committee. It will be a dark period in American history, but with darkness comes light!!!” he wrote on his Truth Social online platform ahead of today’s hearing.

Despite his renewed bid for office, Trump is currently the subject of multiple investigations. Among them are two Justice Department probes – one into the mishandling of sensitive documents found at Trump’s Mar-a-Lago estate; the other into his attempts to subvert the 2020 election.

The department’s inquiry into the Capitol attack is the largest criminal investigation in the department’s history. More than 900 people across the US are now facing charges for taking part in the violence, and prosecutors have indicated that hundreds more cases could be filed.

In Trump’s former home city of New York, he is now facing multiple investigations into his company and personal finances. And in the battleground of Georgia, prosecutors are investigating whether Trump and his allies broke the law by trying to overturn his 2020 election loss in that state, too.

“We have every confidence that the work of this committee will help provide a roadmap to justice and that the agencies and institutions responsible for ensuring justice under the law will use the information we provided the aid in their work,” Thompson said.

The committee’s work over the past 18 months has been informed by about 1000 interviews, more than one million documents, about 100 subpoenas and countless public tips to a confidential hotline. The most powerful testimonies came from those within Trump’s own orbit, such as his former attorney general Bill Barr, former White House staffer Cassidy Hutchinson, his then-legal counsel Pat Cipillone, and daughter Ivanka Trump.

Among the most serious referral against Trump is the charge of inciting or assisting an insurrection which, if proven beyond reasonable doubt in court could exclude Trump from running for office.

Today’s referrals mark the start of a bad week for the former US president. Tomorrow, another Congressional committee – House Ways and Means Committee – will meet privately to discuss what to do with the six years of Trump’s tax returns that it finally obtained after years of legal efforts by the former president to block their release.

On Wednesday, the committee will hand down its multi-part finally report on the January 6 probe, which will also include numerous investigations to stop such an incident from happening again. And also today, jury selection began into the role of far-right group The Proud Boys in the capital riots.