Enjoying the sweet taste of success: Dorset locals who raised £30,000 to save village’s last pub, after four others closed, celebrate with a pint as it reopens for first time over bank holiday weekend

Locals who raised £30,000 in a desperate bid to save the last remaining pub in their village from closure have celebrated inside as it reopened for the first time over the bank holiday weekend.

The White Lion pub in Broadwindsor, Dorset, had been under threat of shutting down after its landlord said last year that they would not be reopening after lockdown.

It would have become the fifth and final pub in the village to close after The Cross Keys, The Oak, The Butchers Arms and The George Inn all ceased trading and were redeveloped for residential use.

But determined villagers set out to rescue the 17th century pub, situated in the centre of the ancient parish, after its owners approached the parish council to see if there was interest in running the pub as a community enterprise.

After a majority of villagers said they wanted to save the local, residents were able to raise £32,000 in just two weeks.

And following two months of refurbishment works, The White Lion reopened as a community pub on Friday with around 100 locals showing their support.

Overall, the group has raised nearly £60,000, around £45,000 of which has come through community donations, and the rest via contributions from several parish council grants and Power to Change and Pub is the Hub campaigns. 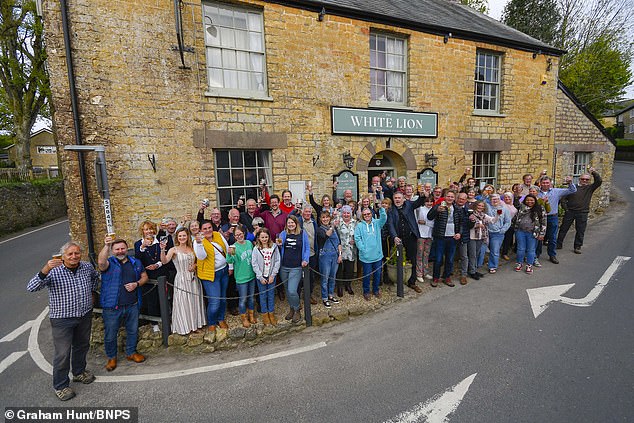 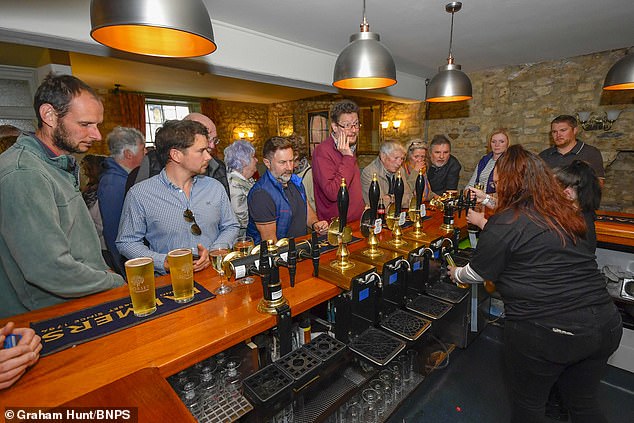 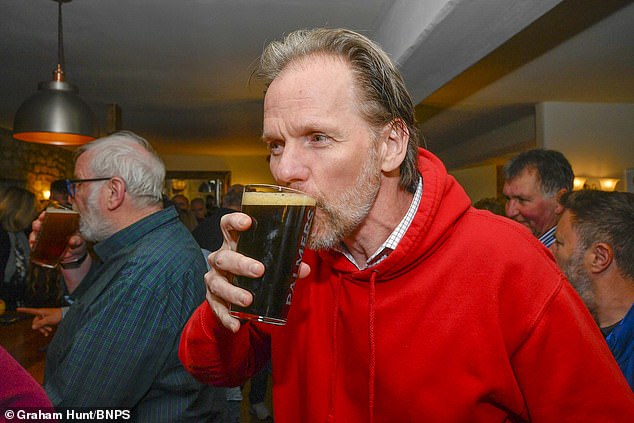 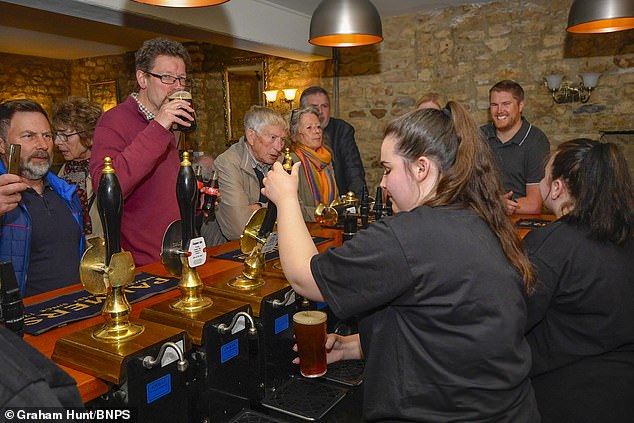 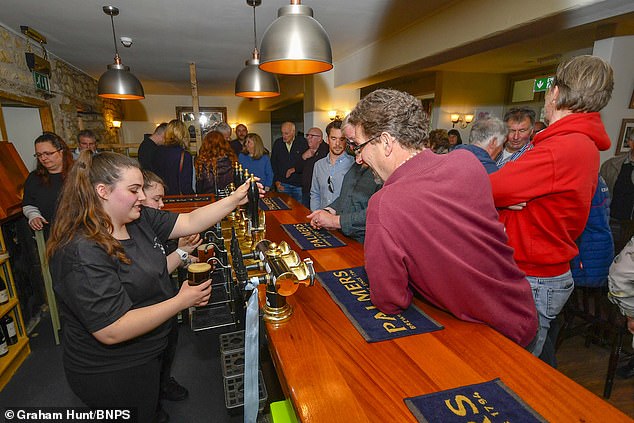 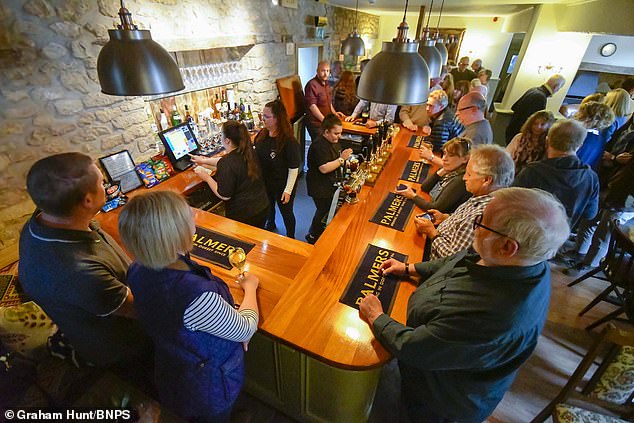 The pub reopened on Friday following a two-month renovation project, which has seen the ba area (pictured) overhauled 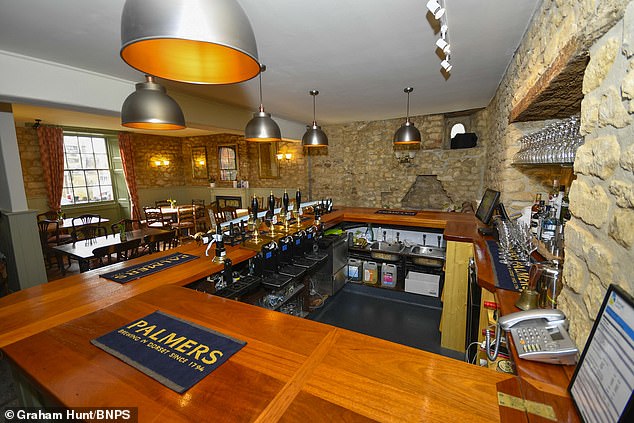 The 17th century pub, located in the centre of the village, has been given a makeover with the money raised by residents 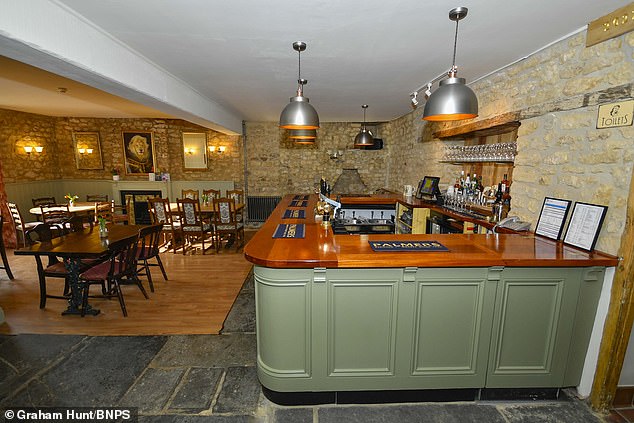 The bar area features hanging lights and nearby tables, while donations will be used to provide kitchen equipment when the pub begins serving food in the near future 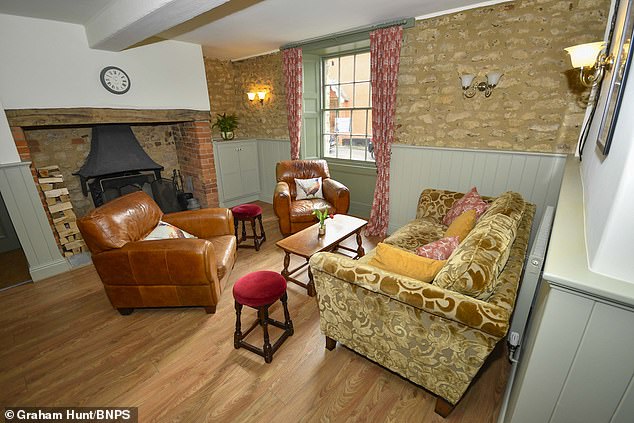 The money has been used to renovate the bar area and provide working capital.

It will also be used to provide essential kitchen equipment so the pub can serve food again in the near future.

David Leader, who spearheaded the campaign, sadly died last month prior to the pub’s opening aged 64.

Rick Dyke, chairman of the White Lion Management Committee, paid tribute to his ‘amazing character’ and said the pub will have tributes to David in the future.

He added : ‘Without David’s energy, enthusiasm and diplomacy, we would not be reopening the pub. We hope that The White Lion will become the community hub that David envisaged.

‘We are incredibly excited to be opening but it is bittersweet with the loss of David. He was an amazing character who put his time and energy into so many different things in the community.

‘We are hoping to have some small tributes to David in the pub in the future.

‘I’d also like to thank the many volunteers who have so freely given their time to help with the refurbishment, some of whom have been almost living in the pub in recent months. 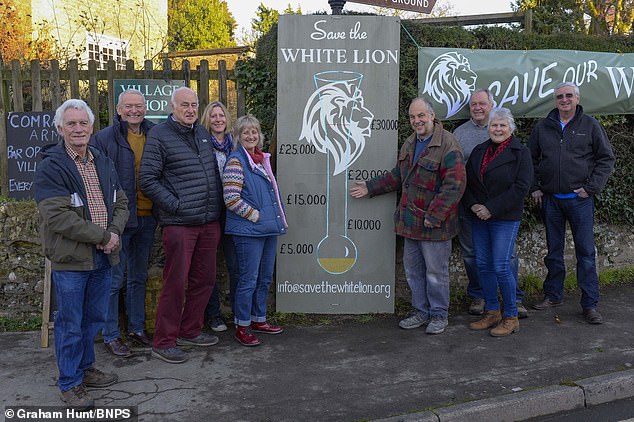 Villagers pictured with the ‘Save the White Lion’ totaliser earlier this year when efforts began to raise £30,000 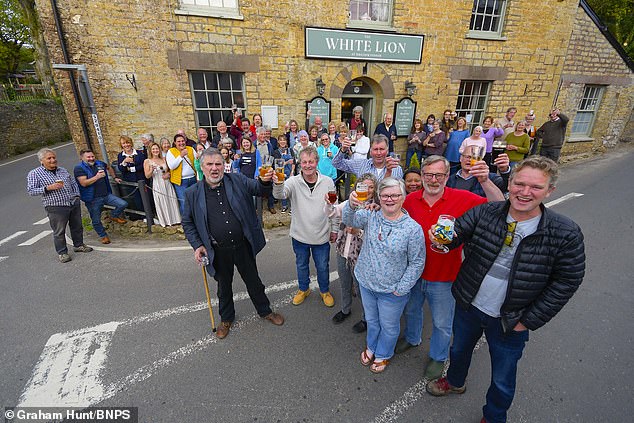 But in less than two weeks, villagers raised the total and have benefitted from donations from the parish council 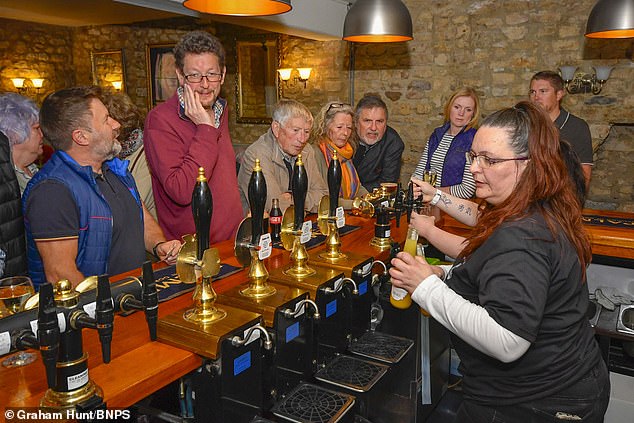 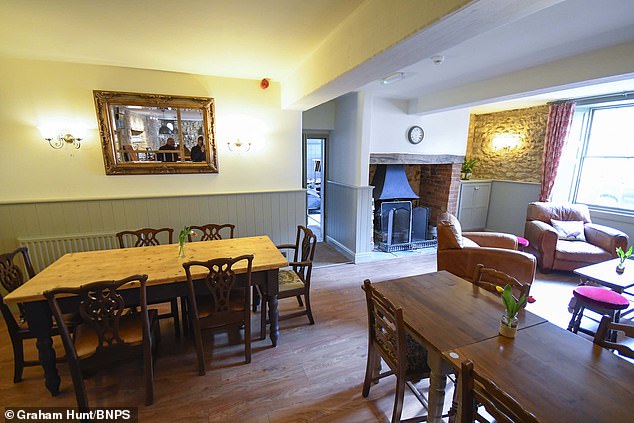 A general view of the bar area inside the pub, which contains tables and chairs, as well as a sofa and more comfortable seating 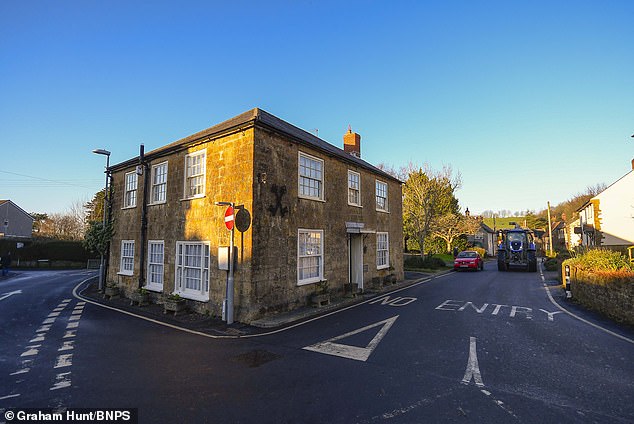 Crosskeys House (pictured) used to be another pub in the village, but is one of four to have been converted into residential use 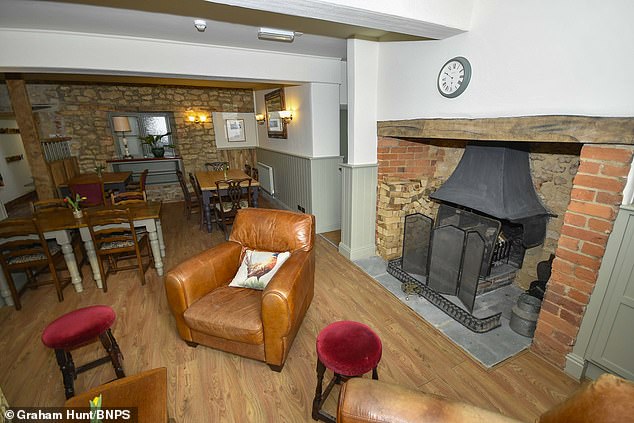 Tables and chairs inside the pub, added as part of the renovation works, are accompanied by a large fireplace

‘I am sure everyone who visits The White Lion will agree that the transformation has been remarkable.

‘We will have three paid members of staff and will get others when the need arises, as well as support from volunteers on an occasional basis.

‘Tuesday there is a fish and chip van that comes to the village so we won’t serve food on Tuesdays but will encourage people to bring their fish and chips to the pub and the bar will be staffed by volunteers that night.

‘We have an open fire and The Log Company, a local business, have also supplied us with a big sack of logs for our opening weekend. It all shows there is a desire within the community to make this a success.’

The White Lion aims to be modestly profitable, but not for profit, offering food and drink with an emphasis on local produce.

The atmosphere is intended to be warm and friendly and a hub for the community.

It will be open from Tuesday to Sunday, with longer hours at the weekend, and will be run by Kate Staff – whose parents live locally along with her two daughters Chloe and Louise.

Broadwindsor has a population of around 1,500 people, including the surrounding hamlets.

The rescue project comes after residents there have already saved the village shop from closing after taking that over as a community project that now turns over £250,000 a year.

The community group will have to pay owners Palmers Brewery a monthly rent based on a percentage of their turnover.