Boarded up with broken windows and pigeons inside, a 19th century building in the middle of Melbourne’s central business district is sitting empty and derelict above the street-level shopfronts.

Despite advertising retail spaces at 317-321 Little Collins Street for its “elite location”, the owners have allowed the upstairs floors to fall into disrepair and its only tenants appear to be the pigeons that can be seen peering out of the windows that have not been boarded up. 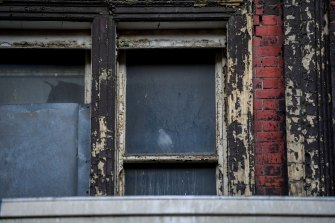 A pigeon inside the upper levels.Credit:Joe Armao

Known as Hotel Barclay, the ornate red brick building with its own turret, between Elizabeth Street and the Block Arcade, was built in 1891 as the Colonial Bank Hotel.

Architectural historian Graeme Butler, who studied the CBD for the City of Melbourne in 1985, said the building was designed by Hyndman & Bates and built by R.C. Brown of Chancery Lane as a hotel, five shops and a warehouse. 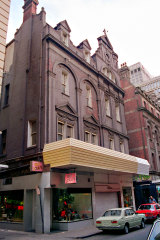 The upstairs exterior was in a fine condition in 1985.Credit:Graeme Butler

“The owner, a Mrs Balcombe, had apparently inherited a considerable amount of property from her husband, and the narrow lane at the side is known as Balcombe Place to this day,” Mr Butler said.

His photo of the upstairs facade from 1985 shows the exterior was in a fair condition at the time, with a few blinds down.

But it has since deteriorated. The only planning applications with the City of Melbourne over the past 20 years relate to the street-level shop fronts.

Mr Butler said it was not unheard of for heritage buildings to be occupied on the ground level but disused upstairs, usually blamed on strict building controls and fire escapes.

The existing owners of the Little Collins Street building, the Bursztyn family from Toorak, bought it in 1975 for $1 million, according to real estate records. The Age attempted to contact the owners.

Heritage consultant Rohan Storey said there were once many buildings with abandoned upper levels in the CBD, but he believed there were now only a handful left after an apartment boom in the 1990s. 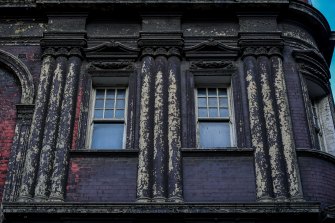 The ornate red brick building was constructed way back in 1891.Credit:Joe Armao

He speculated that for some owners it wasn’t worth repairing and converting their upper floors if they were making good money from the ground floor shops alone.

Mr Storey, who is vice-president of Melbourne Heritage Action, does not believe owners should be forced to repair or use their upper floors so long as they did not pose a danger.

While the building is not on the state heritage register, it is included in the heritage inventory for potential archaeological remains relating to the early settlement of Melbourne.

Any potential developer would need to apply for archaeological consent from Heritage Victoria. There is no record of any application ever being made.

The existing building is protected by Melbourne planning rules as a locally significant heritage property from the “boom era” and as part of The Block precinct.

That means it cannot be altered, redeveloped or demolished without planning approval from the City of Melbourne.

“‘Doing the Block’, a term coined to describe the popular pastime amongst Melbourne’s middle classes of promenading outside the plush retail and accessory stores, reached its height in the boom years of the 1880s,” according to the City of Melbourne’s statement of significance about the precinct.

In 1892, the Colonial Bank Hotel quickly made its way onto the pages of The Advertiser after an assault on a barmaid.

A bookmaker slapped a woman and then threatened to shoot a constable with his loaded revolver, archives show.

Decades before Hotel Barclay was built, the lot was among the first land sales in the earliest days of colonial settlement in Melbourne. Pastoralist and banker John Gardiner purchased the block in June 1837 for just £22 when the city was cut up into the Hoddle Grid.

According to urban planning expert Dr David Nichols, writing in the University of Melbourne’s eMelbourne encyclopaedia, the subdivision started a tradition of developer freedom. It earned Gardiner – after whom a creek, road, reserve and former school was named in the eastern suburbs – a comfortable profit.

“Lots were largely purchased by speculators who saw no need to invest further in their land; in most cases, value grew rapidly before the first crash of 1841,” Dr Nichols wrote.

“In this four-year period, the value of well-positioned land in Melbourne soon became apparent, as in the case of John Gardiner, who made close to a £578 profit on land at the corner of Elizabeth and Little Collins streets.”

The building is remarkably similar to the Melbourne City Building next door, which is on the state heritage register for its architectural significance as an example of the boom classical style.

The responsibility to maintain a heritage site sits with its owners, a spokesman for the City of Melbourne said.

“The city is unable to compel private owners to occupy their buildings but council urges them to consider the role they can play in preserving Melbourne’s heritage and unique identity,” he said.

The council provides incentives for owners to restore heritage sites through the Melbourne Heritage Restoration Fund.

The National Trust believes minimum standards of repair should be required for heritage buildings, at the very least to ensure they are water tight to maintain the structural integrity of buildings.

“To support this, local and state government should also provide incentives for owners to adaptively re-use heritage places and activate unused spaces. Private owners of heritage places provide benefits to the wider community, and this can be acknowledged through the provision of grants for restoration, or tax concessions such as rate relief,” Simon Ambrose, Victorian chief executive officer of the National Trust, said in a statement.

Conserving derelict buildings could generate business and tourism, he said.

The condition of the upstairs interior at Hotel Barclay remains unclear, but while Melbourne’s central business district is hollowed out by COVID-19, and hopefully springs back to life, it’s not the only building sitting empty.