Dozens of incoming medical students walked out of their University of Michigan white coat ceremony Sunday when the keynote speaker — a doctor with anti-abortion views — was introduced.

A tweet showing the medical students and some other attendees of the ceremony walk out as Kristin Collier approached the podium has gone viral. As of Monday afternoon, the tweet had been liked more than 540,000 times.

After it was announced that Collier would be the keynote speaker of the event, a petition for the university to choose a different speaker garnered signatures from 248 current students, 100 incoming students and 72 others, including alumni. 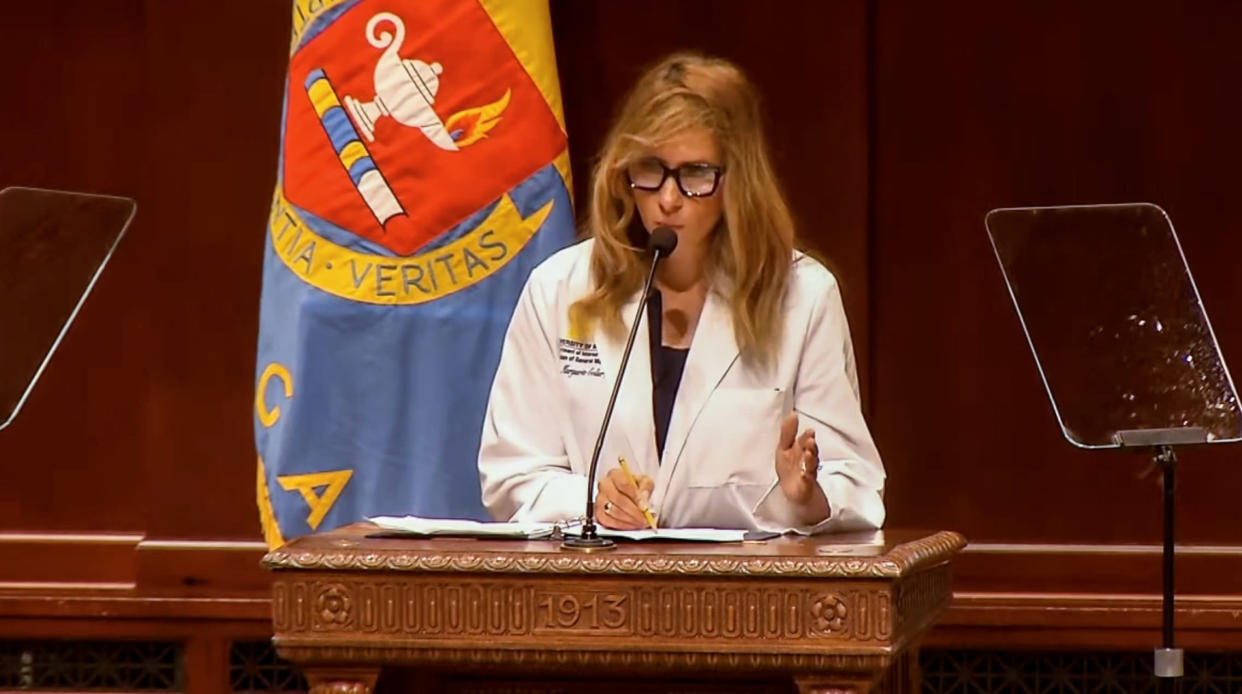 The petition cited instances in which Collier expressed her anti-abortion views in tweets and in interviews.

“holding on to a view of feminism where one fights for the rights of all women and girls, especially those who are most vulnerable. I can’t not lament the violence directed at my prenatal sisters in the act of abortion, done in the name of autonomy,” she tweeted in May.

In an interview with The Pillar, a Catholic publication, Collier detailed her conversion from “secular humanist” to Christian to “a pro-life person.”

“I think it is good to be reminded that people can change their minds on beliefs they have held for a very long time, through a culture of encounter with others and ultimately through the grace of God,” said Collier.

The petition said Collier’s statements “are antithetical to the tenets of reproductive justice as restrictions on abortion affect women of color, other marginalized women, and trans people disproportionately.”

The University of Michigan, though, went through with their plan of having Collier, who works there as an assistant professor and director of the Program on Health Spirituality & Religion.

A spokeswoman for Michigan Medicine at the University of Michigan said Collier was “chosen as the keynote speaker for the 2022 White Coat Ceremony based on nominations and voting by members of the U-M Medical School Gold Humanism Honor Society, which is comprised of medical students, house officers and faculty.”

“The White Coat Ceremony is not a platform for discussion of controversial issues,” she added. “Dr. Collier never planned to address a divisive topic as part of her remarks. However, the University of Michigan does not revoke an invitation to a speaker based on their personal beliefs.”

The statement said that Michigan Medicine is committed to providing safe reproductive care and would continue to offer abortion care, which is still legal in Michigan. The state has an anti-abortion law that predates Roe, but a judge suspended it in May in anticipation of the Supreme Court overturning Roe.

Collier did not immediately respond to a request for comment Monday.

Before her speech, Collier tweeted that she was “truly grateful for the support, emails, texts, prayers and letters I’ve received from all over the world regarding the event that will happen today.

“i feel so bolstered by it. and for my team that have carried me daily thru this —I love you,” she wrote.

Collier didn’t mention abortion or Roe during her speech. She did however, toward the beginning of her speech, say: “I want to acknowledge the deep wounds our community has suffered over the past several weeks.”

“We have a great deal of work to do for healing to occur and I hope that for today, for this time, we can focus on what matters most, coming together to support our newly accepted students and their families with the goal of welcoming them into one of the greatest vocations that exists on this earth, the vocation of medicine,” she said.