The flavor is a fixture on drink menus. But competition from abroad has South Florida growers rethinking their commitment to a once-lucrative crop that requires a lot of investment and care.

HOMESTEAD, Fla. — Dragon fruit, the colorful cactus fruit also known as pitaya, has brought its subtle flavor far and wide this summer, from iced teas at Taco Bell to fruit drinks at Starbucks. So you’d think farmers would be having a banner year.

But in Florida, the business hasn’t been so rosy.

In early June, as the pink, spiky bulbs of fruit were ready to be picked off the cactus, farmers learned that they would get only pennies per pound for fruit that can sell for $7.99 a pound at the grocery store.

“Everybody expected to have a great year,” said Elide Santos, who owns Dragon Fruit Nature Farms, north of Homestead, with her uncle. “But nobody made money.”

The problem? Too much dragon fruit, because of a recent influx of produce grown in Ecuador.

The flood of Ecuadorean fruit is “a once-in-a-lifetime type of thing,” said Peter Leifermann, the vice president of sales at Brooks Tropicals, a distributor that works with select number of Florida dragon fruit farmers.

Florida dragon fruit growers have long competed with farmers from Ecuador, Peru and Vietnam. But this year, Ecuadorean farmers extended their dragon fruit season just as Florida’s began in June, most likely because of unusual weather patterns and a rush to offload fruit in the face of inflation and civil unrest in the country, Mr. Leifermann said. That overlap with the Florida season has been a major blow for South Florida farmers, whose budgets have been tightened by inflation and high labor costs. 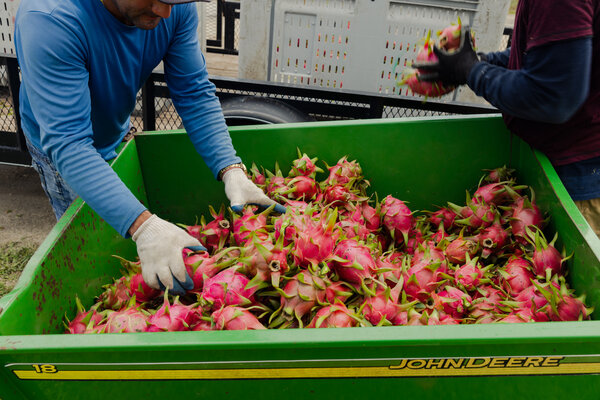 Dragon fruit typically grows here from June to November. The rest of the year, the cactuses require expensive round-the-clock care, including lots of water, fertilizer and pruning.

Distributors like Brooks Tropicals have increasingly handled Ecuadorean dragon fruit because those growers have provided a reliable supply in recent years as Florida farmers dealt with labor shortages during the pandemic, Mr. Leifermann said. Ecuador also has a longer dragon fruit season than Florida’s — an average of eight months through winter and spring.

Ecuadorean dragon fruit also has more appeal with many retailers because it is typically larger than Floridian varieties, Mr. Leifermann said.

After Victor Farinas invested nearly $600,000 in the past year for his 10-acre Homestead farm, he called his distributors in June to tell them that his harvest was nearly ready. But they were so inundated with Ecuadorean fruit, he said, that they couldn’t take his. Mr. Farinas decided to end the business he’d started in 2008.

He said he would lose even more money if he picked the fruit and sold it himself. So he opened the gates to his farm and let people pick and take home the fruit, without charge. He is now selling 1,500 dragon fruit trees, for $80 apiece, by the side of a busy road near his farm.

Demand for dragon fruit has been increasing over the last 20 years, thanks in part to its reputation as a nutrient-dense fruit, said Dr. Jonathan Crane, the associate director of the Tropical Research and Education Center at the University of Florida. The fruit, which depending on the variety are typically red, pink or yellow, is only slightly sweet and has a flavor reminiscent of a pear.

Dragon fruit requires long, sunny days to flower and fruit. Farmers have been able to extend the season by a month or more using artificial sunlight at night, Dr. Crane said.

Throughout the summer, Mrs. Santos sold her fruit from a roadside stand so that the produce wouldn’t go to waste. But she received much less than she would if she had sold the fruit to her normal distributors.

This year’s dragon fruit season has been a painful reminder for Rafael Morera of the South Florida Dragon Fruit Association, who got out of avocado farming in 2011 for many of the same reasons.

He sold that land, and soon after began with five acres of dragon fruit, eventually expanding to 52 acres. The demand for the fruit in the last three years was overwhelming. “I couldn’t plant fast enough,” he said. Mr. Morera’s group represents his own farm and eight other dragon fruit growers, at least 30 percent of them in South Florida.

He says his costs — including labor, fertilizer, palette crates and boxes — have increased by 38 percent this year. But because of the glut of Ecuadorean fruit, he has had to throw away 600,000 pounds of meticulously packed fruit because he couldn’t sell it. Ecuadorean dragon fruit was being sold for pennies per pound, but his break-even price was 72 cents.

Toward the middle of season, he began to sell some of his fruit at a loss. Now, distributors are taking his fruit at the prices he sold them for last year, but he won’t be able to make up the season’s earlier losses. Many farmers, like Mr. Morera, are hoping that they’ll harvest more fruit in November. He’ll be looking for small buttons on the dragon fruit tree that will flower and then grow the white-and-red-fleshed fruit about a month later.

“It’s something really hard to recover from,” Mr. Morera said of the season, If there’s a flood of Ecuadorean fruit next year, he said, “everyone’s pulling out.”

Until this year, Mr. Morera kept expanding his dragon fruit farm. Now, to recover from these losses, he sold five acres to someone who is using the land to build a house. “This is an expensive passion,” Mr. Morera said. “You can only be passionate so much.”