Drink-driver, 26, is jailed for nearly eight years for killing work friend who filmed him swigging lager while racing at 100mph… moments before fatal crash

A drink-driver has been jailed for nearly eight years for killing a work friend who filmed him swigging lager while racing at 100mph moments before the fatal crash.

Meirion Roberts, 26, was drinking at a work Christmas party with his colleague Lewis Morgan before the 20-year-old was killed.

Despite having arranged a lift home from the pub in Carmarthenshire, Roberts decided to drive to Mr Morgan’s house.

Swansea Crown Court heard that Roberts had drunk five pints of cider at the party followed by a can of lager when he got to his friend’s home in Carmarthen.

The two men, who worked together at a building firm, then left, with Mr Morgan telling his brother they were ‘going for a spin’.

Mr Morgan filmed Roberts playing loud music and swigging from a bottle of lager bought from an off licence while hitting 100mph on a dual carriageway.

He then sent the clip to friends via Snapchat minutes before the fatal crash on a 30mph road.

Roberts was today jailed for seven and half years for causing death by dangerous driving by Swansea Crown Court. 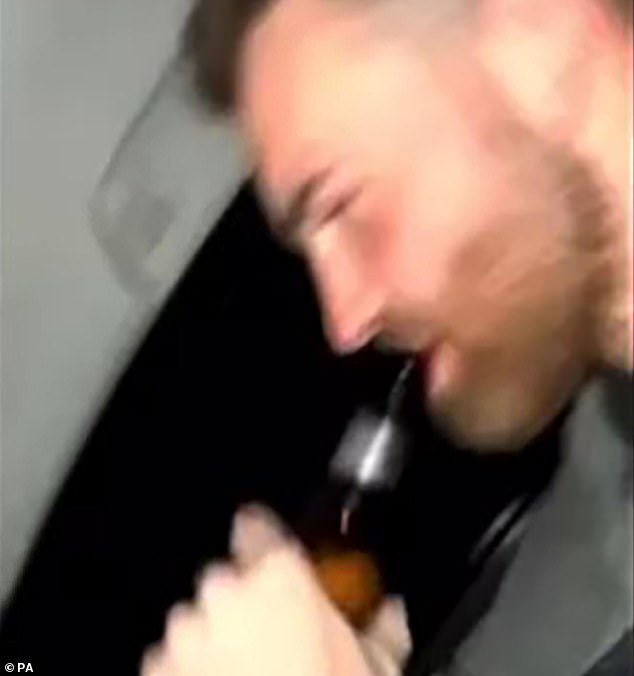 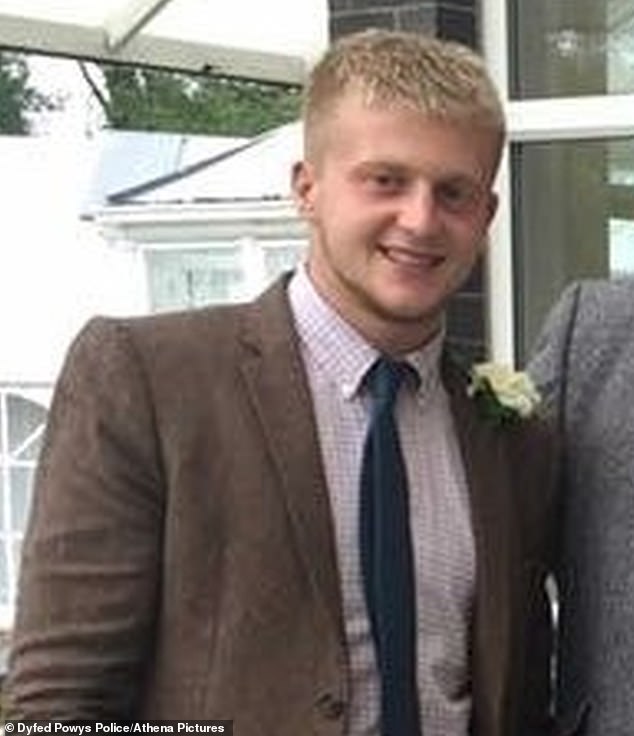 Mr Morgan, pictured, filmed Roberts playing loud music and swigging from a bottle of lager bought from an off licence while hitting 100mph on a dual carriageway. He then sent the clip to friends via Snapchat

The court heard the pair worked together at Fine-Edge Construction Ltd before the crash in December 2020..

Company director Philip Jones said the firm had booked two tables at The Cottage Inn for a three hour stay.

He said he and his employees drank ‘five or six pints with our food’ – and added that Roberts drank cider.

Mr Jones said: ‘If I had known he was even considering driving I would have taken the keys off him. It’s really tragic news and it’s had a massive effect on us all.’

The court heard Roberts was spotted on CCTV after 8pm when he went into to a Bargain Booze store to buy alcohol.

Roberts was doing between 40mph and 50mph on the afternoon of December 4 2020 when he lost control on a bend and hit a telegraph pole and wall – with the Vauxhall Corsa ending up on its roof. 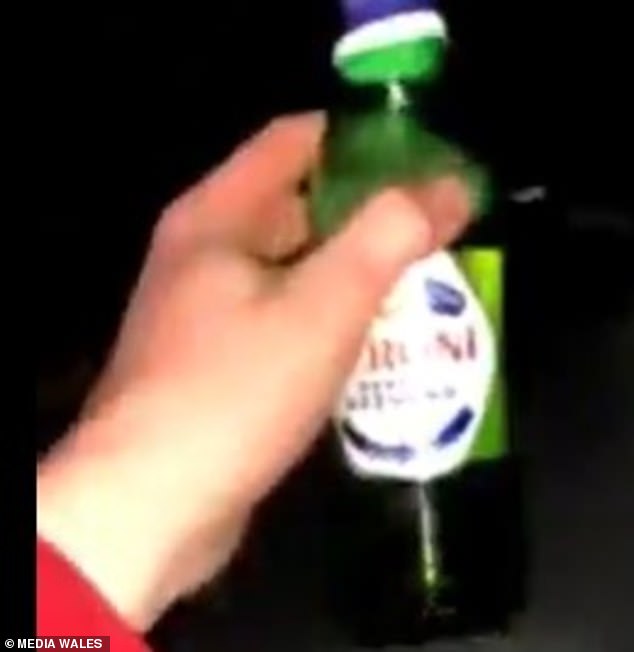 Roberts, of Heol Las, Ammanford, had denied causing death by dangerous driving but was convicted by a jury. Pictured: The snapchat footage shown to the court

Back calculation tests showed Roberts had a blood alcohol level of at least 101mg per 100ml of blood. The legal drink drive limit is 80mg per 100ml.

Carina Hughes, prosecuting, said: ‘The prosecution submits this encompassed driving that involved a deliberate decision to ignore the rules of the road, commencing when he got into the car having consumed alcohol.

‘The prosecution say that level of poor driving shows a disregard for the great danger he posed to other road users.’ 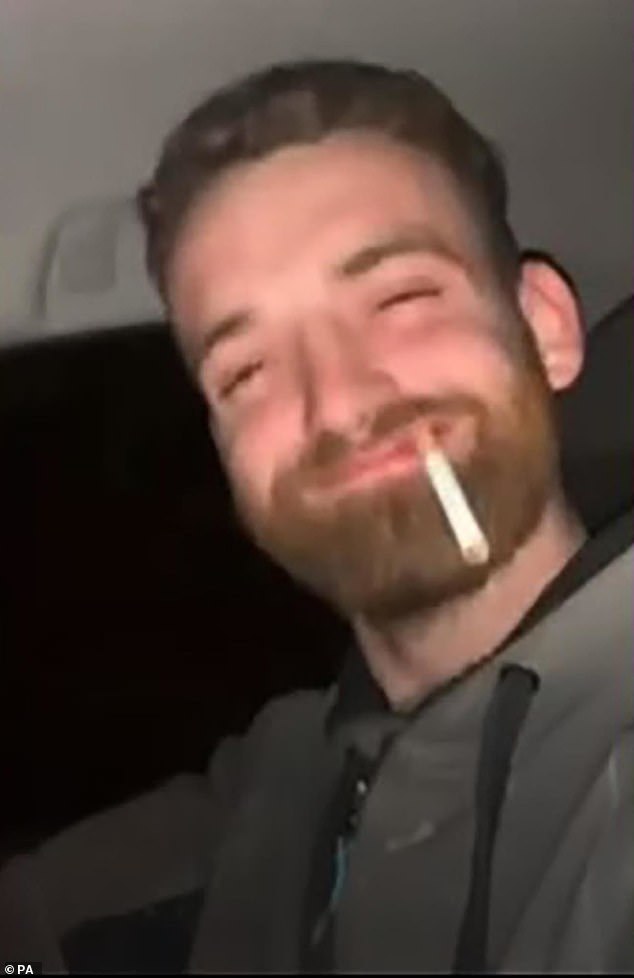 Roberts, pictured, of Heol Las, Ammanford, had denied causing death by dangerous driving but was convicted by a jury

In a victim impact statement, Mr Morgan’s sister, Natalie, said: ‘Losing Lewis has been the most painful experience of mine and my family’s life.

‘The sadness I face every day I cannot put into words. The first thought I wake with in the morning, my last thought at night and every moment in between, I think of Lewis.’

Roberts, of Heol Las, Ammanford, had denied causing death by dangerous driving but was convicted by a jury.

David Leathley, defending, said Roberts had made a mistake in deciding to drive.

‘Notwithstanding the awful consequences of that social gathering and the moral turpitude which was going to bedevil the entire proceedings, Mr Roberts was not there for all-out wickedness, he was there out of good grace and sociability to his fellow man,’ he said.

‘It is a case of moral turpitude because the experience of society is that the consumption of any drink, however small, while putting yourself behind the wheel is crass, dangerous and morally and legally and reprehensible.

‘From that point Mr Roberts goes from being an altruistic, affable, friendly, sociable individual – because of his moral turpitude and his decision to drive – into a killer.’ 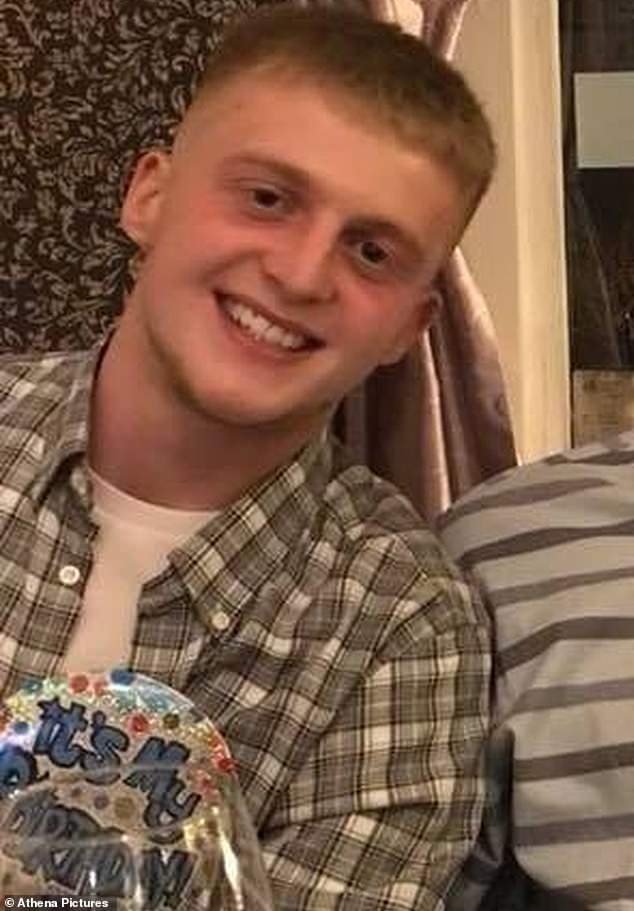 In a victim impact statement, Mr Morgan’s sister, Natalie, said: ‘Losing Lewis (pictured) has been the most painful experience of mine and my family’s life’

Jailing the father-of-one, Judge Christopher Vosper QC said: ‘You deliberately drove when you had consumed alcohol in such a quantity that you knew that you were over the limit for driving.

‘You could have got home by the lift you had arranged but you deliberately avoided that lift and chose instead to drive in the opposite direction.

‘Your purpose was to continue socialising and drinking.’ 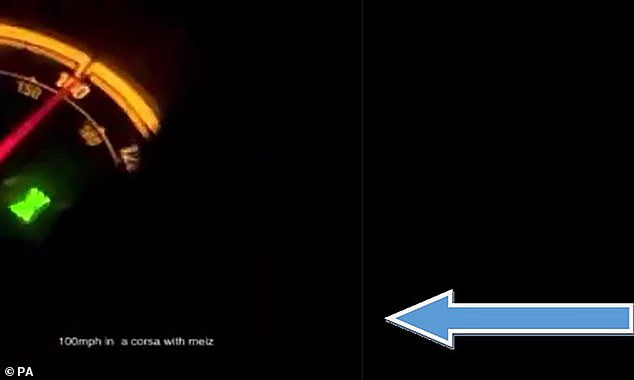 The judge said Roberts’ speed and alcohol consumption had caused him to lose control on the bend and crash.

‘It is right that the driving on the A48 was not the direct cause of the death of Lewis Morgan, however, it seems to me that driving at 100mph on what is motorway standard road may well in fact be less dangerous than driving at speeds of 50mph on a B-road, which is restricted and has bends on it of the sort you failed to negotiate,’ he said.

‘I have to acknowledge too that no sentence the court can impose will reduce the grief which Lewis Morgan’s family feel and will continue to feel at his loss.’

Roberts was also banned from driving for six years and nine months.