One of the ringleaders of the student backlash against Rod Liddle’s speech at Durham University is a Jeremy Corbyn supporter who stood for the Labour Party at the local elections earlier this year.

Sean Hannigan, 22, president of the Junior Common Room at South College, addressed 300 people at a protest on Wednesday, where he backed calls for students to stop paying rent.

He said: ‘The only way that the university will listen is if it hits them financially. This country belongs to us, gay people and black people and every person who lives here.’ Borrowing a slogan from Mr Corbyn, the politics graduate said: ‘We need to stand up for this country and its rights and build a new country for the many, not the few.’

Mr Hannigan was at the dinner at South College where Rod Liddle gave a talk on December 3, covering trans issues, women’s rights and racism. 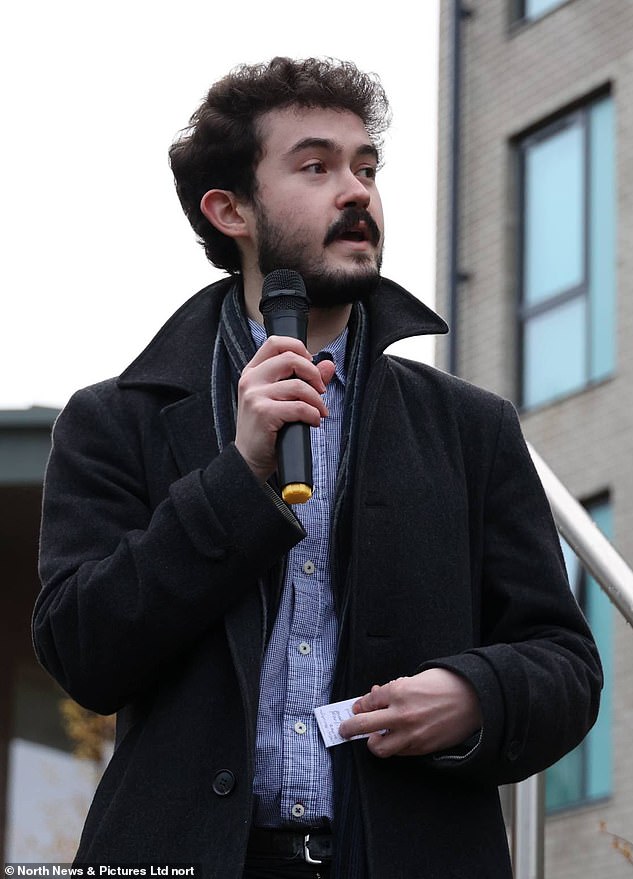 Sean Hannigan, 22, (pictured) is a ringleader of the backlash against Rod Liddle’s speech at Durham University 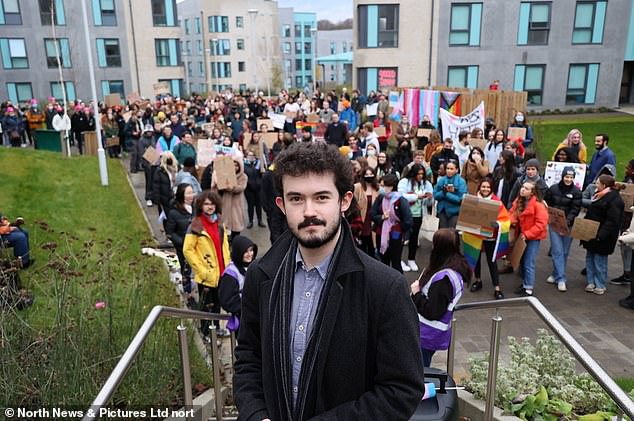 The ‘woke’ mob had ramped up its campaign to oust Professor Luckhurst last night as seven societies accused him of ‘gross misconduct’. Mr Hannigan is a Jeremy Corbyn supporter who stood for the Labour Party at the local elections this year 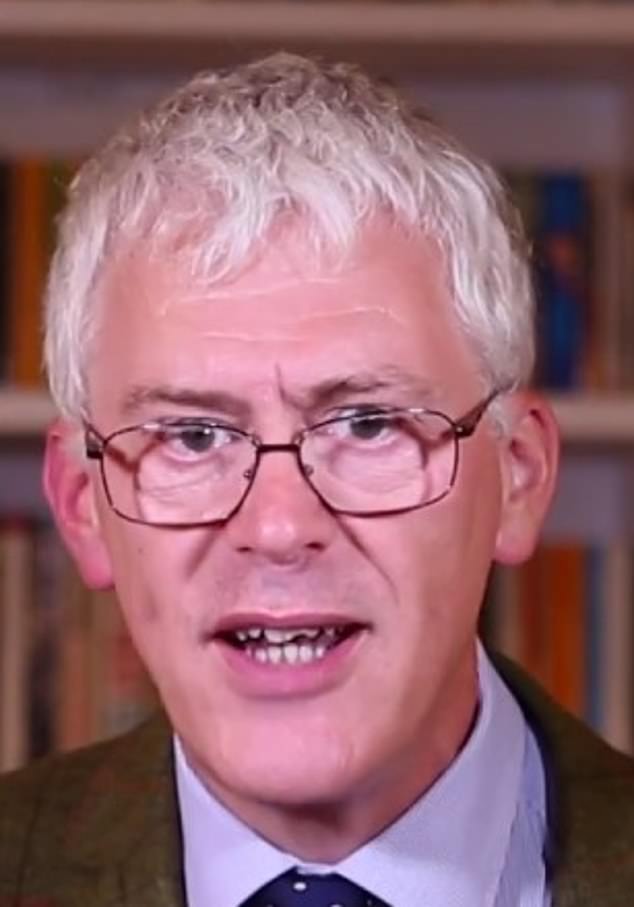 In the reception area, Luckhurst (pictured) and Liddle were confronted by angry students. Video footage shows Luckhurst telling one critic ‘speech does not cause pain’ and telling another to ‘calm down’ 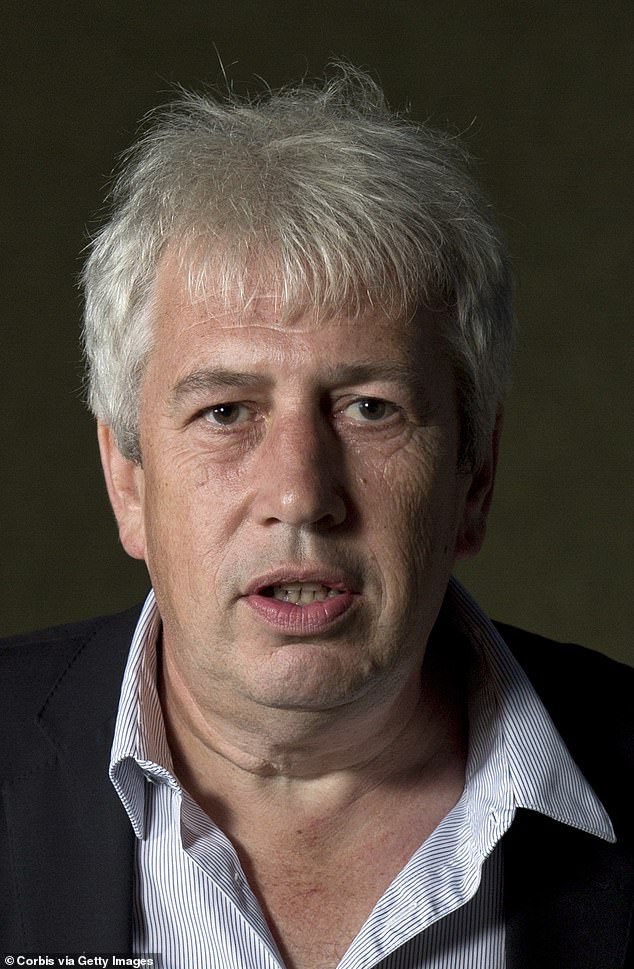 Rod Liddle was invited by Professor Tim Luckhurst, an old friend and former newspaper editor who is now the College’s Principal

The student gave his own speech afterwards, condemning Mr Liddle’s remarks, which was greeted by cheers and applause from student attendees, according to the Palatinate student newspaper.

Mr Hannigan spent a month working as an intern in the parliamentary office of then Shadow Transport Minister Matt Rodda in 2019 and has ambitions to become a Labour MP. He stood unsuccessfully for Labour in local elections for Oxfordshire County Council in May, winning just 577 votes.

He posted on Instagram: ‘The Labour Party, particularly since Corbyn, has provided people like me with an alternative – and an end to austerity.’ 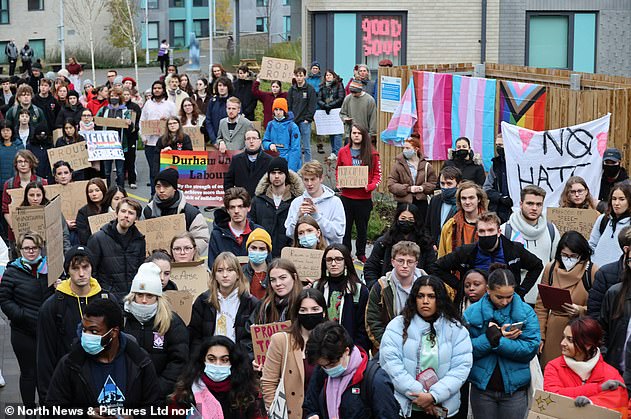 He said ‘families like mine have suffered’ under austerity. His family home is a £600,000 semi-detached house in the village of Crowmarsh Gifford near Henley-on-Thames.

Other hard-Left campaigners are demanding the removal of Professor Tim Luckhurst, the principal of South College, who has been suspended after he criticised students for walking out of Mr Liddle’s talk.

Durham students’ union president Seun Twins, who called for the professor to be sacked and said his position was ‘untenable’, has described Mr Corbyn as ‘the white king’ and suggested that Tories should be ‘dealt with’.

The statement in full:

‘The Principal of South College has insulted and humiliated the student members of the College. Tim Luckhurst, the former editor of a national newspaper, knew exactly what he was doing when he hijacked a Christmas party and allowed his personal friend to spout vile propaganda he knew would cause division.

‘His shameful attempt to excuse this pantomime by pretending it was for the benefit of students’ education is disgraceful. He has failed in his duty of care as Principal to South College students, and as a leader in our University community.

Inviting your friend to deliberatively provoke and shock students in their own home is a violation of their community.

‘South students who were enjoying their Christmas celebrations were compromised by their Principal, who prioritised his own political agenda over their interests.

‘Attempts to spin this act as a progressive strike for ‘education’ is an insult to every student and actual academic at Durham. This is hazing, pure and simple; a straightforward abuse of power, which Luckhurst knew would provoke those who refused to silently submit to his theatrical brand of bullying to stand up, and face his insults.

‘We fully stand by our students who exercised their freedom of speech rights to leave this sorry excuse for an ‘education’. We are also grateful to the very many academics at Durham, and beyond, who are calling out this attempt to corrupt their professional reputation for selfish reasons.

The Principal’s attempts to frame his calculated behaviour within the freedom of speech discourse is disingenuous, and does a disservice to those genuinely fighting threats to academic freedom across the world.

‘We will challenge the Acting Vice-Chancellor on how it could ever be procedurally correct for a Principal to take it upon himself to ruin a Christmas party because his ‘right’ to ‘educate’ students was more important than their right to just enjoy their dinner, with friends, in their home. The students at South College deserve a proper apology, not just self-aggrandising quotes from Orwell.

‘We must also acknowledge the, at best inappropriate and at worst antagonistic, behaviour by the Principal’s wife. Guests in our community are expected to respect our community. Our Colleges are not battlegrounds for childish belittlement; they are learning communities, and respect is fundamental to learning.

‘We have read a lot about the Principal’s ‘rights’ over the weekend. We have seen little recognition of his responsibilities. We ask that our community therefore focuses not on the distraction he has invited, but rather on the standards we should expect of a College Principal compared to the behaviour we have seen. Watch the videos of Friday night.

‘Read the testimony of students who were present and the statements of our College representatives and SU Associations. This is not the behaviour of a man we want educating, leading and supporting our students.

Durham’s problematic culture is endemic. This is not an isolated event, but a result of a longstanding failure to properly address unacceptable behaviour. We have welcomed the recent commitments and efforts from the University leadership to tackle the historic problems, and this incident shows that the change needed extends beyond policy and into culture.

‘This is a test for all of us. If we accept this style of leading a College as normal then what we saw on Friday will become the norm.

Notwithstanding any other positive things done at South College, Tim Luckhurst’s position at Durham is untenable.

‘No Principal gets to abuse their students, call them pathetic, and then attack them for wanting to just be safe in their home. The Principal of South College’s position as an intellectual and pastoral leader is now a threat, not an asset, to our collegiate community.

We must make clear our commitment to our values, and demonstrate our anger that this response has been necessary, so we encourage all students, staff, and supporters to contact the Pro-Vice-Chancellor (College and Student Experience) to make their views known.

‘The events of Friday are acknowledged as unacceptable, and we must now have the wider conversation about what we expect of our leaders, and the conversation must be bigger than the misdeeds of one stubborn man.

Finally, in situations like these, when someone is in the wrong but convinced of their ‘rights’, it can be incredibly easy to help them make themselves a martyr. Our community can’t afford to have someone who so clearly offends our values subjected to a rushed or flawed process that lets them claim to be a victim.

‘We have to trust that the University leadership will do the right thing, even though the process won’t be in public and the outcome won’t be immediate. We should rightly be angry at the people who violate the values of our community, but we understand why institutional public statements are cautious in these situations. We’ll judge them on their response and how they demonstrate that Tim Luckhurst is not untouchable.’