An elite team of British commandos launched a training ‘raid’ in a small boat from a Royal Navy submarine against the backdrop of snow-covered mountains of a Norwegian fjord.

UK forces used the largest winter exercise hosted in Norway in 30 years to demonstrate the unique combined capabilities of the Royal Marines and Submarine Service.

In Lyngenfjord, three dozen miles east of Tromso deep inside the Arctic Circle, the Surveillance and Reconnaissance Squadron launched small teams from an Astute-class hunter-killer submarine from Faslane in Scotland for ‘subsurface insertion’ missions.

The aim was to carry out reconnaissance missions on the rocky, icy shoreline in sub-zero temperatures while avoiding the multi-national ‘enemy’ force hunting them. 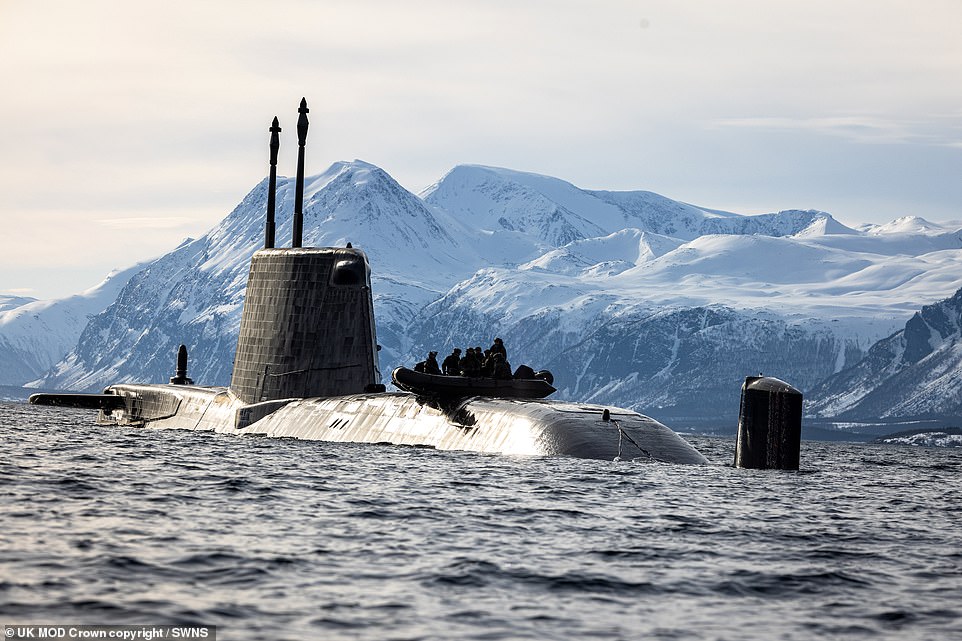 Royal Marines have deployed to Northern Norway to carry out their traditional winter deployment in the Arctic Circle. Commandos will refresh skills in surviving, moving and fighting across the ice 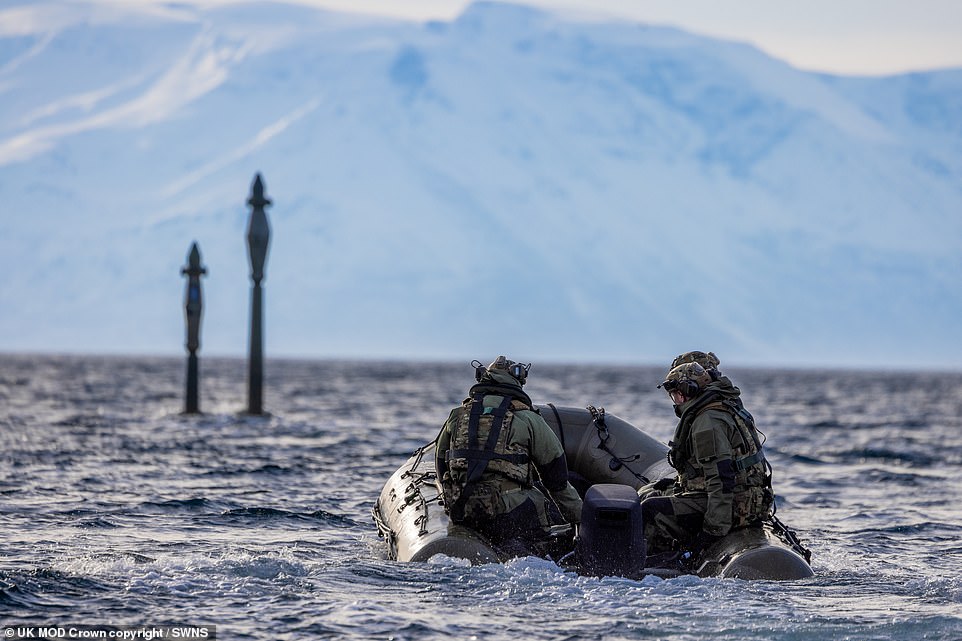 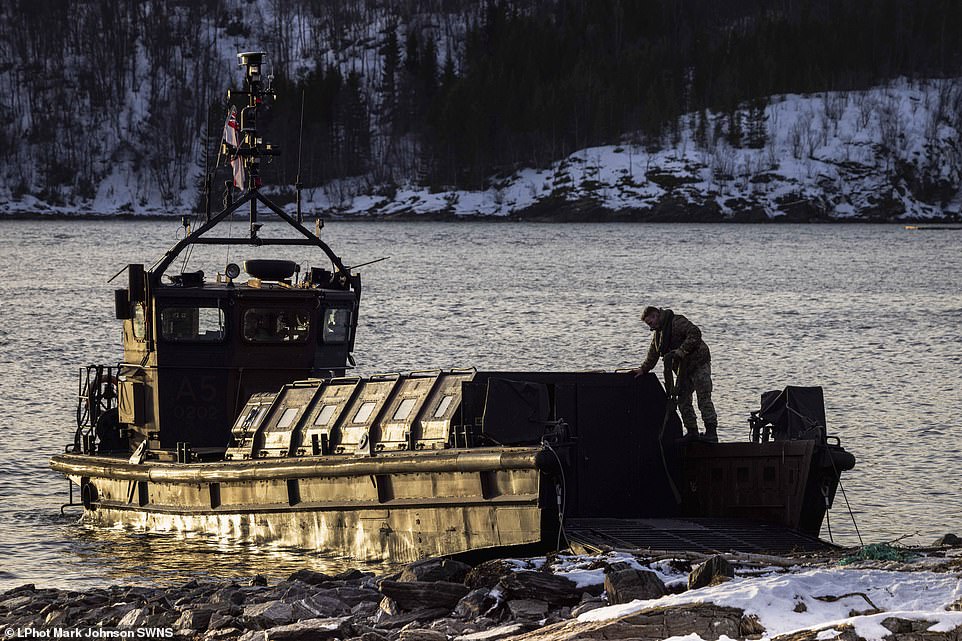 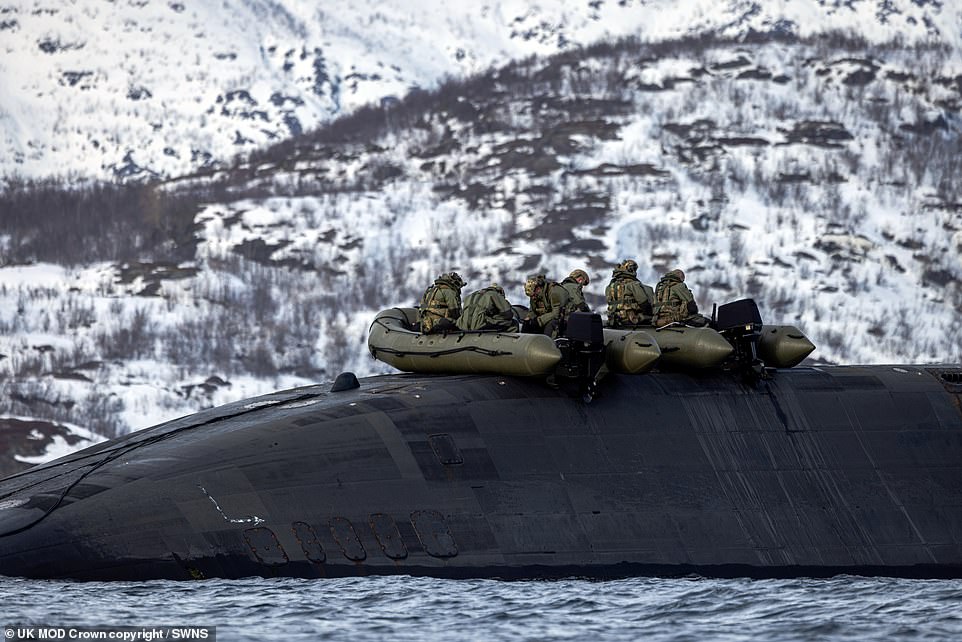 This year, Royal Navy ships will join Royal Marines for the large-scale Norwegian-led exercise Cold Response 22 which will take place between March and April and see around 30,000 troops from 27 countries in Europe and North America taking part

Cold Response 2022 is a long-planned exercise bringing together thousands of troops from NATO allies and partners, testing their ability to work together in cold weather conditions across Norway – on land, in the air and at sea.

Nato said allies and partner armed forces will come together over the next few weeks to trek across the vast wilderness, conduct live-fire drills, and leap into freezing lakes. The alliance said the aim is to make sure the armed forced are prepared to respond to ‘any threat or crisis’ to keep countries and people safe.

Cold Response 2022 is bringing together around 30,000 troops from 27 countries from Europe and North America, including Norwegians, the US, Dutch, French, Italians and Germans.

Those troops will be training together in cold weather exercises – on land, in the air and at sea – in Norway and the surrounding areas between March and April 2022.

Norway hosts the training biannually, and this year’s exercise was announced more than eight years ago. Nato said the training is not linked to ‘Russia’s unprovoked and unjustified invasion of Ukraine’.

The Surveillance and Reconnaissance Squadron – drawn from Plymouth-based 30 Commando Information Exploitation Group – is a specialist team of commandos, who forge the way ahead for their fellow green berets to follow.

They are trained to gather valuable information on the terrain, the enemy and suitable beach landing places for larger amphibious forces to come ashore, arriving by ski, snowmobile, boat, all-terrain vehicles, helicopter or parachute, depending on the situation and environment.

‘Being able to move sub-surface gives us a discreet means of moving our specialist teams to any coastline in the world,’ said the SRS team leader.

‘Not only can we conduct operations in isolation but by accessing and reconnoitring these complex coastlines by small craft we can set the conditions for larger, more lethal follow on forces.’

‘We used one of their larger, faster craft to access areas out of range of our small craft, an excellent example of working together to achieve a common aim.’

Commodore Jim Perks, the head of the RN Submarine Service, said: ‘The ability to operate undetected for significant periods of time with top quality kit ensures that a submarine remains a formidable delivery mechanism, in this case enabling the covert deployment of the Surveillance and Reconnaissance team as showcased in the exercises off Norway.

‘Our ability to work together highlights the remarkable attributes of the team and the platforms in which we operate.’

The training in Lyngenfjord – a small but important phase of the Cold Response 2022 exercise – proved the usefulness of using submarines to access strategically important-areas with small teams of highly-trained specialists without being detected.

It was also part of wider intensive raiding and reconnaissance operations the UK’s commandos have been carrying out in northern Norway during Cold Response.

To the southwest, on Senja Island, 40 Commando – having launched from an amphibious task force spearheaded by HMS Albion – raided Skrolsvik Fort where ‘enemy’ systems were denying access to air support.

The Royal Marines ‘destroyed’ key infrastructure around the fort – which was built by the Nazis in the Second World War – and secured areas for allied forces to gain access and establish a launchpad to forge inland.

This year’s exercise is the largest of its kind for more than 30 years and has involved 30,000 military personnel from 27 nations including Norwegians, US, Dutch, French, Italians and Germans.

The UK is one of very few nations capable of operating in this demanding environment.

The Royal Marines have been conducting cold weather training in Norway for more than 50 years and are the UK’s force of choice for the region.

Brigadier Rich Cantrill, in charge of the UK’s commando forces, said: ‘Cold Response 22 provides an unparalleled opportunity to come together as a NATO force in the very harsh conditions of the high north and to operate across all the domains, land, air and sea.

‘I know that after this exercise we will leave here better connected and more ready. Cold Response 22 offers an amazing opportunity to learn how to work together in a really harsh environment.

‘You’ve got to cope with the environment first before you can then think about the adversary, and so there is no more realistic environment or harsh environment then up here, which is a huge opportunity for all of us.’