Emily Thornberry today accused Donald Trump of ‘trying to tear freedom apart’ as she demanded the end of the ‘strongman era’ of world politics.

The shadow foreign secretary took a sledgehammer to the so-called ‘special relationship’ as she said Mr Trump was ‘not the leader of the free world’.

She claimed the US President was instead the ‘guiding light’, ‘hero’ and ‘mentor’ for uncompromising leaders like Russia’s Vladimir Putin.

Her comments are likely to spark controversy on the other side of the Atlantic given that a snap general election, widely expected to take place before the end of the year, could result in a Labour government.

Links between the White House and Downing Street have been strengthened in recent weeks due to the burgeoning relationship between Mr Trump and Boris Johnson.

But Ms Thornberry’s remarks suggest Labour would take a very different approach to dealing with the UK’s oldest ally.

And it was not just Mr Trump who was targeted by Ms Thornberry during her address to activists at Labour’s annual conference in Brighton as she savaged a long list of world leaders.

But she saved her most vicious criticism for the current occupant of the White House. 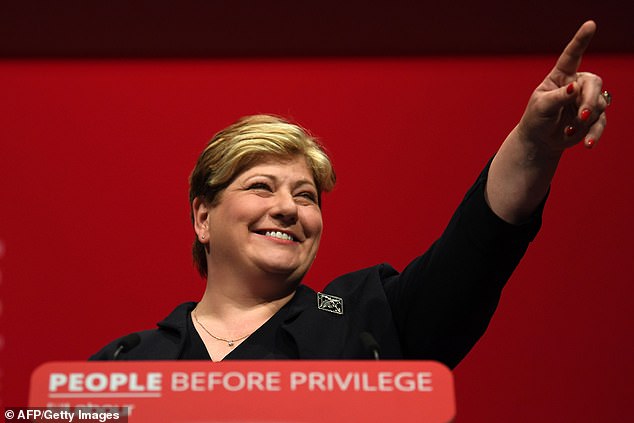 Emily Thornberry, pictured on stage at Labour Party conference in Brighton today, used her speech to launch a vicious attack on Donald Trump 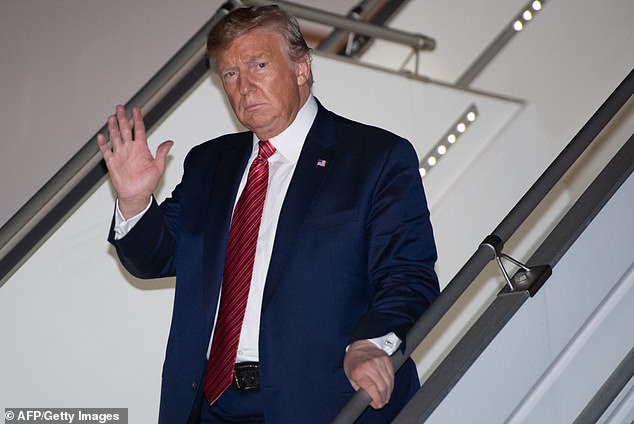 Ms Thornberry said Mr Trump, pictured arriving in New York yesterday, was ‘not the leader of the free world’ but the ‘hero’ of ‘strongman’ leaders across the world

She said: ‘Is it any wonder we are seeing this rise in “strongman” politics when the daddy of them all – their hero, their mentor, their friend – is sitting in the White House: the so-called leader of the free world, Donald Trump.

‘And how can you lead a free world when you are actively supporting the suppression and annexation of Palestine?

‘Donald Trump is not the leader of the free world. He is the role model, the guiding light, for all those “strongman” politicians around the world who are trying to tear freedom apart.’

Ms Thornberry said ‘no-one has taken more inspiration’ from Mr Trump than Mohammed Bin Salman, the Crown Prince of Saudi Arabia, who she described as a ‘monster’.

Referring to the murder of Jamal Khashoggi, a journalist and critic of the Saudi Arabian government, she said: ‘You know I asked the question when he visited the UK last year: “Why on earth would they roll out the red carpet for Bin Salman?”

‘Well now we know why. It’s the only way to cover up the blood which is dripping from his hands from the murder of Jamal Khashoggi and the slaughter of thousands of innocent civilians in Yemen.’

Saudi Arabia has admitted Khashoggi’s killing was a premeditated act carried out by government agents, but said they were ‘rogue elements’ who acted without official authorisation.

Critics have claimed the killing was authorised at senior levels of the Saudi Arabian government.

Ms Thornberry said the world was in the process of ‘being consumed’ by ‘strongman politics’.

‘Putin killing with impunity from Syria to Salisbury,’ she said. 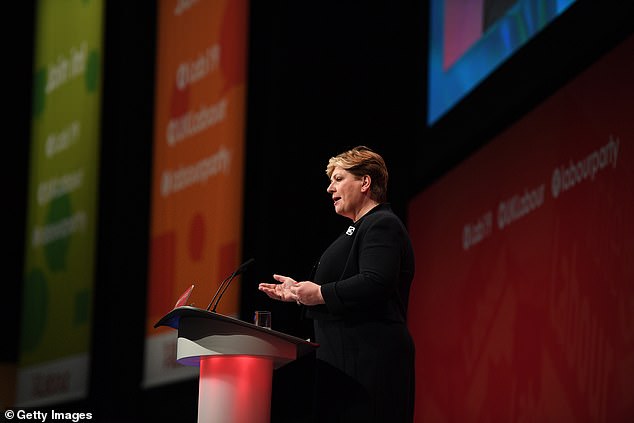 ‘Khamenei jailing innocent women in Iran as diplomatic bargaining chips. Assad, Erdogan, Orban, Sisi – the list goes on and on.’

Ms Thornberry said the ‘age of impunity needs to end’ and added: ‘This era of “strongman” politics needs to end.

‘And yes, there are signs of hope: Jacinda Arden in New Zealand; Cyril Ramaphosa in South Africa; Antti Rinne in Finland; Abiy Ahmed in Ethiopia, and a whole generation of progressive men and women who are shaking up American politics, and putting the fear of God into Donald Trump.’