England has announced a further ten Covid-19 deaths, but Scotland, Wales and Northern Ireland have suffered no new victims.

Government officials are yet to confirm the early count, which is calculated by adding up deaths reported by each home nation.

England reported the ten deaths in NHS hospitals only. The figure does not include care homes, which will be in the official tally later.

No deaths were reported by the other three nations across any setting – hospitals, care homes and private homes.

New diagnosed cases will also be reported later this afternoon, expected to be the first time the figure will be correct in over a week.

A ‘technical issue’ between September 25 and October 2 meant that cases were underreported by almost 16,000, it was revealed this weekend.

Positive Covid-19 cases received their result, but their information was not given to NHS Test and Trace, and they were not logged on the Government dashboard for the public.

The Government’s coronavirus data dashboard says that the issue has been ‘resolved’ and Public Health England has said that ‘further robust measures have been put in place as a result’.

But the blunder will have led to an inevitable delay in some contacts of Covid-19 patients being reached, meaning thousands of infected people may have unknowingly been spreading the coronavirus. 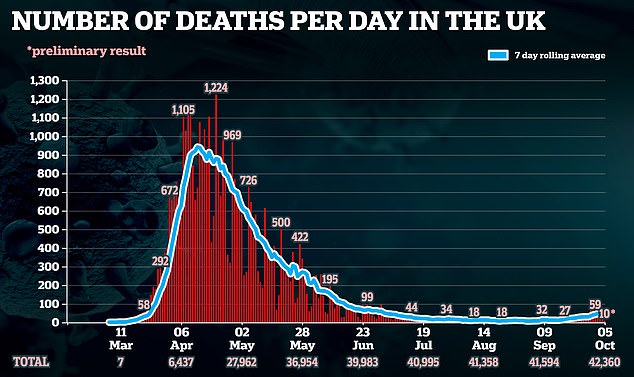 England has announced a further ten Covid-19 deaths in the early count, taking the total to 42,360. The official number will be revealed by the Government this afternoon

Deaths can vary day-by-day and are normally lower on Sundays and Mondays because of a recording lag at the weekend — just 33 were announced yesterday compared to the rolling seven-day average of 52.

When taking into account the rolling-average, the trend has risen upwards consistently for the past few weeks. It was 30 last Sunday, 21 on September 20 and 11 on September 13.

The most up-to-date government coronavirus death toll updated this afternoon stood at 42,350. It takes into account victims who have died within 28 days of testing positive.

The deaths data does not represent how many Covid-19 patients died within the last 24 hours. It is only how many fatalities have been reported and registered with the authorities.

And the figure does not always match updates provided by the home nations. Department of Health officials work off a different time cut-off, meaning daily updates from Scotland and Northern Ireland are out of sync.

The toll announced by NHS England every day, which only takes into account fatalities in hospitals, doesn’t match up with the DH figures because they work off a different recording system.

For instance, some deaths announced by NHS England bosses will have already been counted by the Department of Health, which records fatalities ‘as soon as they are available’.

The government’s official toll is different to the figures compiled by the Office for National Statistics, which includes suspected fatalities where coronavirus was mentioned on a death certificate and not just lab-confirmed ones.

The ONS says some 52,500 people across England and Wales have died of suspected or confirmed Covid-19 this year.

And in its most recent report, published  on Tuesday, revealed 139 people succumbed to the life-threatening disease in England and Wales in the week ending September 18, up 40 per cent from the 99 in the previous seven days.

But Covid-19 deaths announced each day by the Department of Health or by the ONS each week are nowhere near where they were at the start of the pandemic.

They have tumbled since the peak in April when more than 1,000 peope died on some days and hospitals were focusing their attention on hundreds of Covd-19 patients.

Currently the seven-day rolling average of new hospital admissions in England is 310. It’s been steadily rising since late August, but is still a far cry from the 2,700 or so admitted each day in the first week of April.

Confirmed Covid-19 cases are also nowhere near levels witnessed during the darkest weeks of the pandemic in March and April, when more than 100,000 Britons were estimated to be catching the virus every day.

Number 10’s lacklustre testing policy meant millions of cases were never counted, but researchers tracking the outbreak have been able to give an estimate retrospectively.

Predictions now say that between 8,400 and 20,000 people are being infected each day. The former figure is from ONS and the latter from King’s College London.

The body of a missing Florida woman has been found, bringing a tragic end to a three-week long search. Shortly after noon on September 25,…