London: The possibility of Brexit being delayed or overturned in a second referendum is swinging some Tory Eurosceptics reluctantly behind Theresa May's deal ahead of a third vote on the package.

Talks are continuing with the Democratic Unionist Party, which said there were "still issues to be discussed" with ministers about the deal and the contentious Irish backstop measures.

The Eurosceptic Sunday Telegraph said the DUP was demanding a seat at the negotiating table for post-Brexit trade talks. 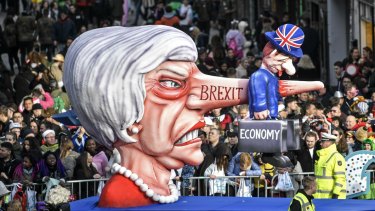 A carnival float depicts British Prime Minister Theresa May and the Brexit during the traditional carnival parade in Duesseldorf, Germany. Credit:AP

May has issued Brexit supporters a clear ultimatum – ratify her deal by a European Council summit on March 21 or face a delay to Brexit way beyond June 30 that would open up the possibility that the entire divorce could be ultimately thwarted.

But so far the number of Tories publicly switching positions has amounted to a trickle rather than the flood the prime minister needs to overturn the 149-vote defeat for the deal she suffered on Tuesday.

Shrewsbury and Atcham MP Kawczynski acknowledged that the prime minister's deal was now the "only game in town".

His comments came after former cabinet minister Esther McVey, who resigned over the Brexit deal, suggested she and other MPs could now back it, even though it was "rubbish".

And North Wiltshire MP James Gray appealed to fellow members of the Brexiteer European Research Group to get the "obnoxious" deal over the line because it was "the only way we can achieve anything which even vaguely resembles the Brexit that 17.4 million people voted for". 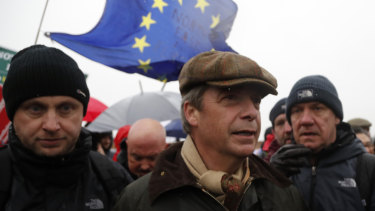 Former UKIP party leader Nigel Farage, centre, joins the start of the first leg of March to Leave the European Union, in Sunderland, England, on Saturday.Credit:AP

But other ERG figures played down the prospect of large numbers swinging behind the deal when it is brought back for a vote.

Meanwhile, talks continued with the DUP but the party stressed that the presence of Chancellor Philip Hammond at a meeting on Friday did not mean that money was an issue.

"We are in discussions with the government to ensure Northern Ireland is not separated out from the rest of the United Kingdom as we leave the European Union," a spokesman said.

The prospect of the UK leaving the European Union on March 29 has receded after MPs authorised May to seek an extension to the Article 50 Brexit process.

European Commission vice-president Frans Timmermans indicated that any extension to Article 50 could be a two-stage process, initially limited to a few weeks unless May could set out what she wanted to achieve with the extra time.

He told Germany's Funke newspaper "as long as this isn't clear, Brexit can only be delayed for a few weeks, solely to avoid a chaotic withdrawal" on March 29.

"During this time, the British must tell us what they want: new elections? A new referendum? Only after that can we talk about a several-month extension," he added.

Meanwhile activists angered by the prospect of a delay to Brexit have joined a march with the former UK Independence Party leader Nigel Farage which left Sunderland in chaotic scenes only to be met by a counter protest.

The March to Leave set off from the staunchly pro-Brexit north-east city on Saturday morning, and will make its way over to London over two weeks, arriving in the capital on March 29, where a mass rally will take place on Parliament Square, although Farage will not be completing the full distance.

The group of largely older protesters set out along a muddy coastal path from Sunderland, 435 kilometres north of London, shouting "Accept democracy" and "Rule Britannia".

The marchers will not cover the whole distance on foot.

"If politicians think they can walk all over us, we're going to march back and tell them they can't," Farage, wearing a flat-cap, declared.

The Royal Family has had a rocky few months which have been defined by three huge departures. Prince Andrew stepped down from his official role…