I watched the silent sepulchral tide flow, then slow to a halt… dumbstruck: Every facet of humanity flocks to experience a few magical minutes at Queen’s casket which all will take to their grave, writes ROBERT HARDMAN

Majesty. Pure majesty. No other word does justice to the spellbinding sight which awaits those lucky enough to reach the end of what will be one of the longest queues in living memory.

Last night, I watched this silent, sepulchral tide flow, then slow, then come to a dumbstruck halt.

For as you turn the corner into the vaulted masterpiece of Westminster Hall, you are confronted by a vision of timeless, incomparable grandeur.

You stand at the top of the mighty flagstone staircase leading down into this country’s most ancient and august gathering place – the same steps from which the Queen herself would address both Houses of Parliament on her jubilees and other great anniversaries.

And it hits you between the eyes like a searchlight.

Behold the longest-reigning – and many will say greatest – monarch in the thousand-year story of these islands lying in state in the very heart of our democracy. 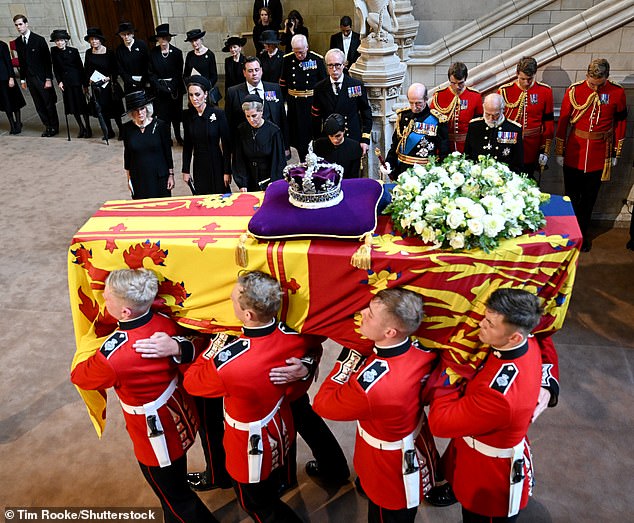 Camilla Queen Consort, Catherine Princess of Wales, Sophie Countess of Wessex and Meghan Duchess of Sussex courtesy as the coffin of Queen Elizabeth II is brought into Westminster Hall 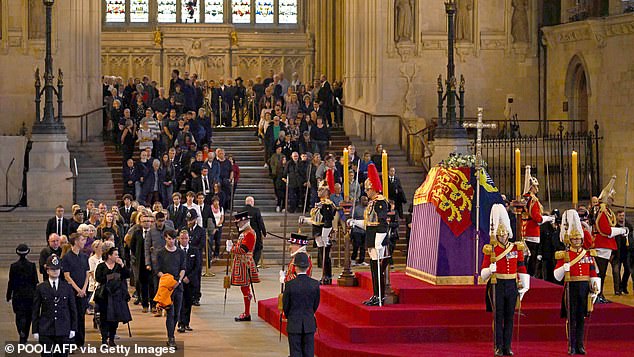 Members of the public pay their respects as they pass the coffin of Queen Elizabeth II, lying in state at Westminster Hall 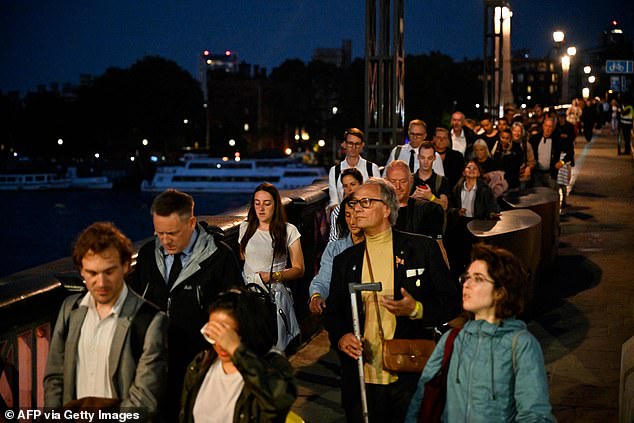 Members of the public queue on Lambeth Bridge in London today to view the coffin of Queen Elizabeth II, lying in state at Westminster Hall

Resting on her Royal Standard-draped oak coffin, atop its purple-draped catafalque, is not just the Imperial State Crown but also the Orb and Sceptre. It is their first appearance alongside the late sovereign since her coronation in 1953.

No wonder everyone stops in their tracks.

In two lines, they then step slowly down the staircase to the main hall and shuffle ponderously either side of this monumental centrepiece. Once level with the coffin, everyone bows. Some curtsey, too.

One man performs a double, palm-pressed ‘namaste’ and drops on to the deep, sand-coloured carpet to touch the floor.

A few weep openly. One middle-aged woman tries to hold it together but then her face melts and she buries it in a turquoise pashmina.

A few are dressed smartly for a funeral, in suit and tie or black dress and hat. Most are dressed for the five-mile queue which they have just endured uncomplainingly.

Here before them is the essence of constitutional monarchy writ glorious in silk, diamonds, silver, velvet, sapphires, pearls, halberds, breastplates, swords, oak, brilliantly-buffed boot leather, Norman stonework and so much else.

Yet here, too, are trainers, anoraks, hoodies and jeans in the presence of Her Late Majesty. Why not? This is simply a snapshot of the 21st-century Britain she loved and served every bit as diligently as the cap-doffing Britain which squeezed into its Sunday best before filing past her darling father in 1952.

There is no dress code here, merely a rigidly imposed ban on photography (official photographers are there to capture the scenes you see here).

Here is a two-way act of recognition – our late sovereign paying homage to her people as they in turn pay homage to her.

They are all ages, all races, all shapes and sizes. It is incredibly touching that, in the space of half an hour, I count three people with white sticks being guided through. No matter that they cannot see the candle light bouncing off the First Star of Africa – the greatest diamond in existence – from its setting in the head of the Sceptre.

You don’t have to see the glint of the Orb to know you are in the presence of authentic greatness. You can feel it, too.

Indeed, as you pass alongside the huge wreath of white roses, dahlias, lavender and pine – all of them fresh from Windsor or Balmoral – you can smell it, too.

I see mobility scooters. A few couples have come with children. One has a baby. All life is here.

In this great chamber, the Queen’s father and mother lay in state, too. So did her first (and greatest) prime minister, Sir Winston Churchill.

Yet, this is the same hall in which Charles I was tried and sentenced. The equilibrium between Crown and state which underpins our constitutional settlement was forged beneath these soaring hammerbeam arches of ancient oak.

This will be the scene around the clock until the crack of dawn on Monday.

Guard upon guard stands watch – three tiers of them at any one time, rotating their duties around the clock.

All those ancient bodies so proud to call themselves the Queen’s bodyguards – her Honourable Corps of Gentlemen at Arms, her Yeomen of the Guard, her Royal Company of Archers, her Household Cavalry and her Foot Guards – are more than honoured to play their part. This is almost an act of military communion with their late commander-in-chief, for whom they were, historically, the closest line of defence. All stand with head bowed.

On each corner, too, stands a bowing Metropolitan Police officer, presumably just in case.

Keeping a keen eye on everyone are the doorkeepers of the Palace of Westminster. Smartly dressed they may be in their tailcoats, but they are never to be messed with. Yet in the course of half an hour, I do not see them approach anyone.

They are there to give a gentle nudge to any dawdlers, not that anyone outstays their welcome. I time 50 mourners and each spends an average of four seconds stopping and bowing, before moving off again.

Then they speed up and move at a steady pace for the great door at the far end.

There, many turn back and simply gaze in near-disbelief at what they have just experienced.

‘We will never see anything like this again in our lifetimes, and certainly not with the person who served as a sovereign for so long and did it so well,’ says Moya O’Shea, a Londoner who hails from Australia and is here on behalf of friends back home ‘who couldn’t be’.

Penny Purnell, a pensioner from Littlehampton, spent all day getting to the front of the queue. She admits she is struggling to accept the loss of the Queen, even after seeing all this: ‘That was quite hard to take.

‘It was just the thoughts in our head of appreciating her really. I didn’t really want to say goodbye, so I didn’t.’

There is a delay to the proceedings every 20 minutes as the commanding officer taps his staff twice on a step. All must pause for three minutes while there is a silent Changing the Guard.

The mourners are thrilled by this hold-up. It only adds to the sense of occasion.

And so every facet of humanity – for the Queen represented them all – flocks to experience a few magical minutes which all will take to their grave.

Thus, for now at least, Elizabeth II really is our Queen.

Thankful, truly, will be those who saw her here.