‘I thought I was a goner’: Ex-British soldier turned illegal alcohol salesman, 56, reveals how he broke out of a Kabul jail in his FLIP FLOPS before dashing through blood-soaked streets to catch a plane back to Britain

An ex-British soldier turned illegal alcohol salesman has revealed how he broke out of a jail in Kabul in his flip flops before dashing through blood-soaked streets to catch a plane back to Britain.

Ian Cameron, 56, who had been arrested in March with over £30,000 worth of illegal alcohol, recalled phoning his wife Sally to say his final goodbyes as the Taliban seized the Presidential Palace in Afghanistan’s capital city on Sunday.

The father-of-one said bullets were hitting the walls with shouts of ‘Allahu Akbar’ heard while the Islamist terror group engaged in a gun fight outside his jail cell at the Counter Narcotics Detention Centre in Qasaba, near Kabul.

But after hiding inside for one hour, he escaped alongside nearly 1,000 other prisoners in his plastic flip flops after a guard unlocked the door.

His revelations come as the UK is in a race against time to help British nationals and supportive Afghans leave the country, while the US President suggests rescue missions must be completed within 10 days. 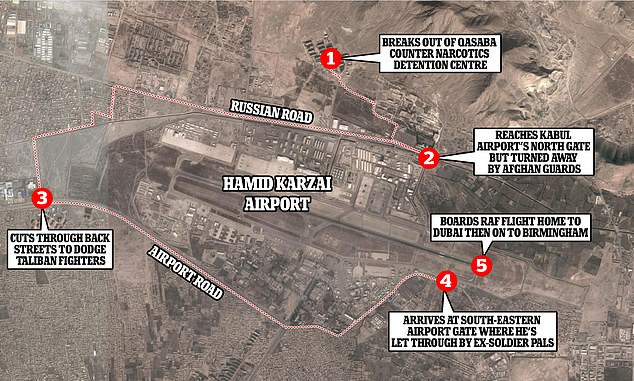 Ex-British soldier Ian Cameron, 56, has revealed how he broke out of a jail in Kabul in his flip flops before dashing through blood-soaked streets to catch a plane back to Britain 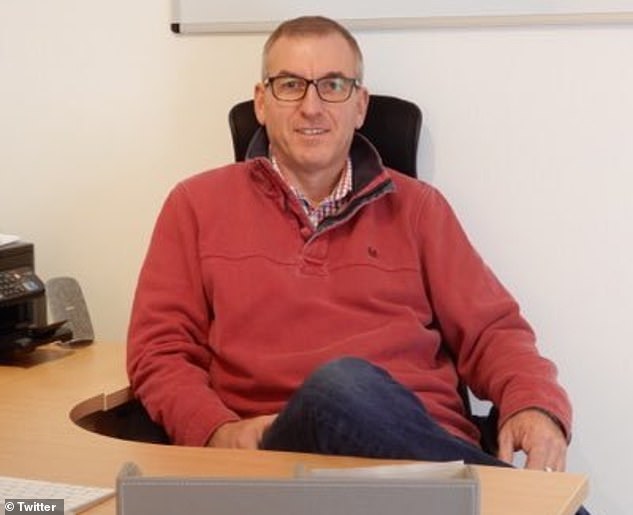 The father-of-one, above, said bullets were hitting the walls with shouts of ‘Allahu Akbar’ heard while the Islamist terror group engaged in a gun fight outside his jail cell at the Counter Narcotics Detention Centre in Qasaba, near Kabul

Mr Cameron, who performed duties in the Royal Military Police for 24 years, told The Sun: ‘I’ve been in a few tight spots but I can honestly say, with my hand on my heart, this was the first time I thought, “I might be a goner”.

Referring to his wife, he continued: ‘I told her I loved her. I said I thought this might be it and, yeah, you know, we said our goodbyes.’

While making a run for it, other inmates provided him with a Covid face mask and a cotton scarf to make him appear less noticeable.

Recalling seeing blood everywhere, he said: ‘I could tell that people had died, but the bodies were already gone. I don’t know what had happened.’

Mr Cameron, who had been dubbed ‘The Milkman’ for his alcohol-selling profession, was then surrounded by the other prisoners as they tried to hide him.

But after running and dodging through traffic for two hours to reach the airport’s North Gate, he was refused entry by Afghan guards due to not having any ID. 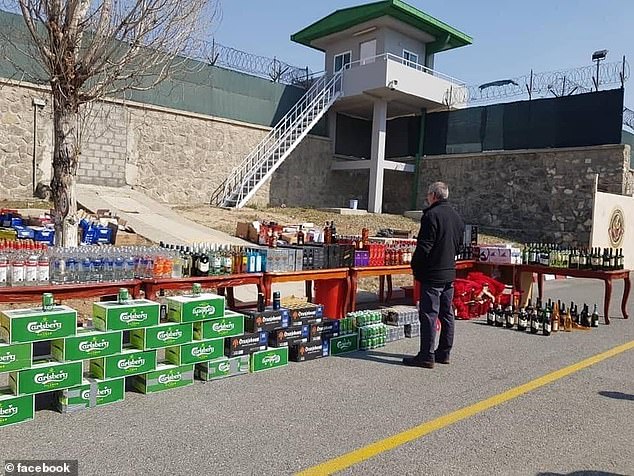 Mr Cameron, who had been dubbed ‘The Milkman’ for his alcohol-selling profession, was surrounded by the other prisoners as they tried to hide him 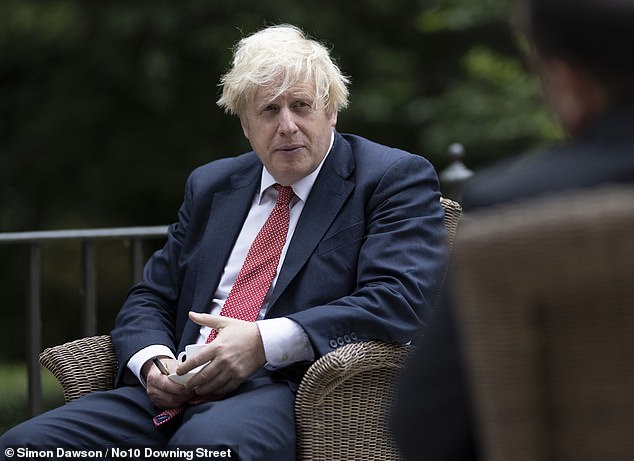 The UK is in a race against time to help British nationals and supportive Afghans leave the country, while the US President suggests rescue missions must be completed within 10 days 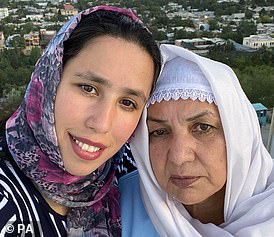 A British citizen has said she is ‘traumatised’ awaiting news of her medically vulnerable mother, who was knocked unconscious while trying to flee Afghanistan.

Fereba Hafizi, a fashion photographer from Coventry, said her 79-year-old mother was left unconscious after being pushed over in a melee of people on her way to catch a flight with UK authorities on Wednesday morning.

According to her daughter, Layloma Hafizi, a dual British and Afghan citizen with a number of health conditions, had to be carried on her nephew’s back and dropped off at a pickup point at a Kabul hotel.

She was escorted inside on a wheelchair, but her daughter has heard nothing about her whereabouts since.

‘[My cousin] was assisting my mother… without his support and pushing people aside from her path it would not have been possible for her to even make it to the gate of the hotel,’ Ms Hafizi, 29, told the PA news agency.

‘He put her on his back and dragged himself through the last line of crowds.

‘The consulate staff and the guards assisted them inside, but they immediately discharged my cousin as he did not have a foreign passport.

‘I have lost all contact with her and I have absolutely no idea if she has recovered, or if the aircraft has departed or not.’

Layloma had travelled to Afghanistan a month ago to attend a funeral, which was for the father of the nephew who carried her, but then had difficulty booking a flight home due to Afghanistan being on England’s red list as a result of the coronavirus pandemic.

From there, he managed to jump in a taxi which took him to a security blockade in the south-eastern part of the airport, where British soldiers were carrying out evacuations.

He was handed a change of clothes by three of his former military colleagues, with one major saying they had been expecting him and even asking for a selfie together.

Mr Cameron then departed on a RAF C-17 flight to Dubai where, still wearing his flip flops, he boarded a Titan Airways charter plane to Birmingham.

He must now quarantine at a hotel in the city for 10 days and is awaiting a much-anticipated reunion with his wife.

The ex-troop was originally sentenced to 18 years in prison, but this was slashed to five following an appeal.

It follows Boris Johnson, speaking after chairing an emergency Government meeting about the situation, telling broadcasters in Downing Street: ‘We went in to support and help protect the United States.

‘So when the United States decides emphatically to withdraw in the way that they have, clearly, we’re going to have to manage the consequences.’

He said 1,000 people had been repatriated to the UK on both Thursday and Friday, with most of them UK nationals or those who had assisted British efforts in Afghanistan.

According to The Times, Mr Johnson feels ‘let down’ by Mr Biden over the way the US has handled the withdrawal.

It has been suggested the President told G7 leaders at their meeting in Cornwall in June that he would keep ‘critical US enablers’ in Kabul following the US exit from Afghanistan to ensure a Western presence could continue in the capital, according to a British diplomatic memo seen by Bloomberg.

British officials read the memo, issued before the Taliban’s lightning offensive across the country, as meaning enough security personnel would stay to ensure that the UK embassy in Kabul could continue operating, according to the news service.

Instead, the British embassy has been evacuated, Downing Street confirmed this week.

Mr Biden defended the US withdrawal, saying he had ‘seen no questioning of our credibility from our allies around the world’ after speaking with Nato partners.

But Nato members had a message for Washington following a virtual meeting of foreign ministers on Friday, with the 30-nation group calling on the US to secure Kabul airport for as long as it takes, even if that stretches beyond the evacuation of all American nationals.

The Prime Minister used conversations with allies on Friday to pursue his own diplomatic push for international partners to take a united front in dealing with the Taliban.

He and Dutch prime minister Mark Rutte agreed any recognition of a new Afghan government should not happen on a unilateral basis, according to a Downing Street readout of their phone call. 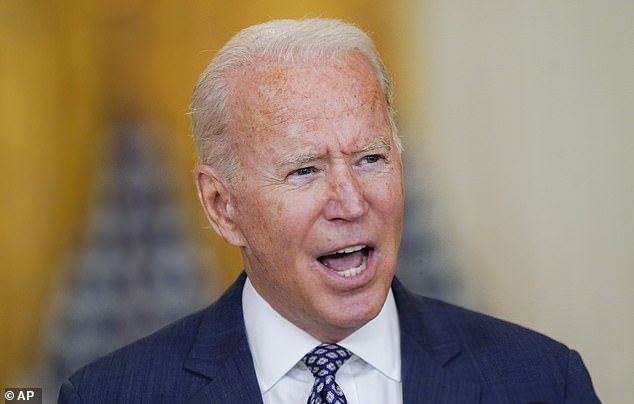 Joe Biden defended the US withdrawal, saying he had ‘seen no questioning of our credibility from our allies around the world’ after speaking with Nato partners

Mr Johnson hinted that the UK could be willing to work with the Taliban ‘if necessary’ to ‘find a solution’ after 20 years of military engagement.

Under the Taliban’s previous rule in Afghanistan, women were largely confined to their homes, television and music were banned, and public executions were held regularly.

The leaders of the movement have pledged more moderation this time, although reports of targeted killings in areas overrun by the Taliban have fuelled fears they will return Afghanistan to repressive rule.

Asked whether the militants were a regime he could potentially work with, Mr Johnson said: ‘I think it’s very important that we take people at face value. We hope that they mean what they say.’