A FORMER supermarket worker brought his old job home with him – collecting 65 dumped shopping trolleys he kept in his back garden.

Bernie Lucker, 65, worked at Tesco for 12 years but ended up in the doghouse with wife Jackie because he filled up their garden patio with supermarket carts which had been abandoned in the street. 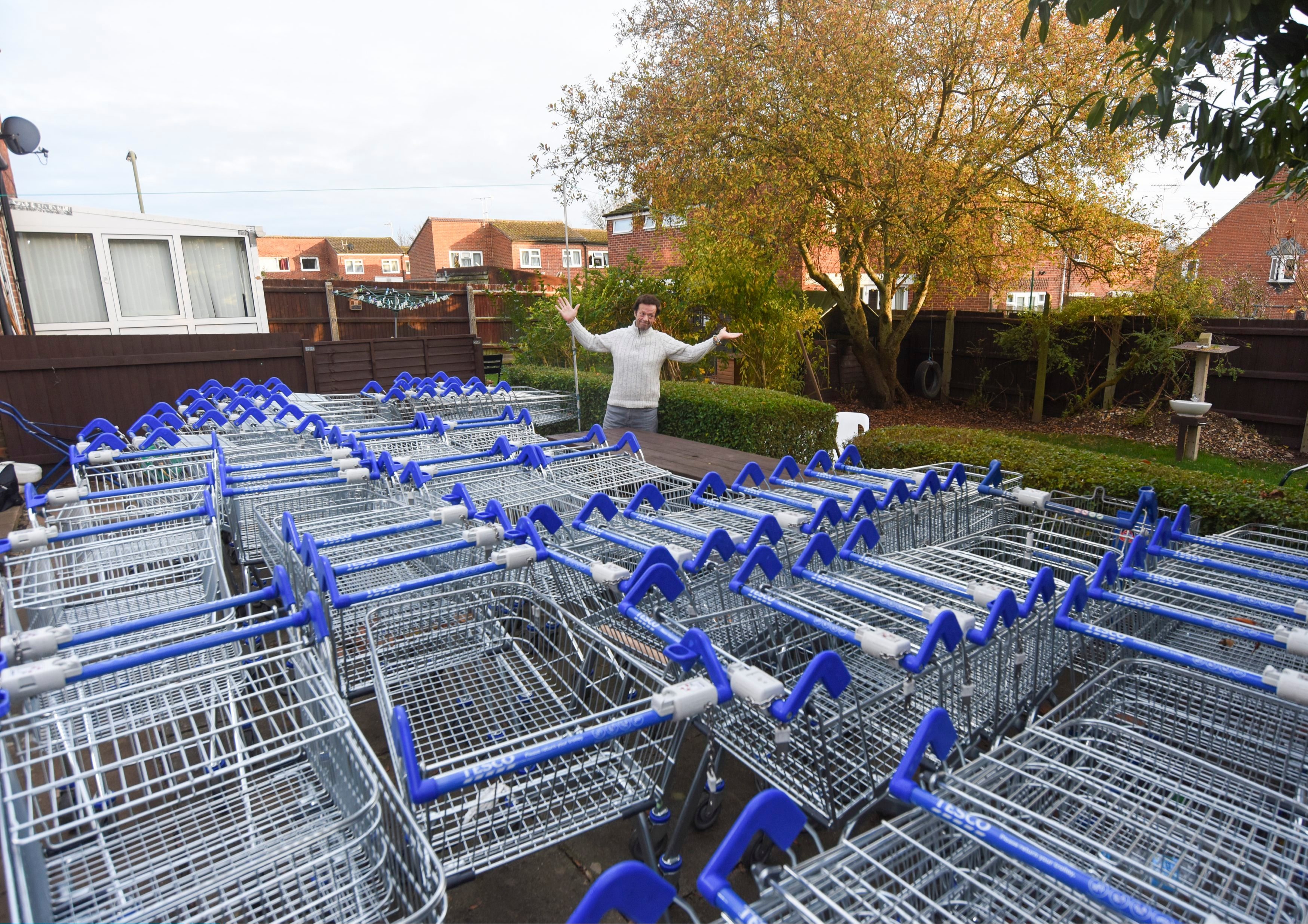 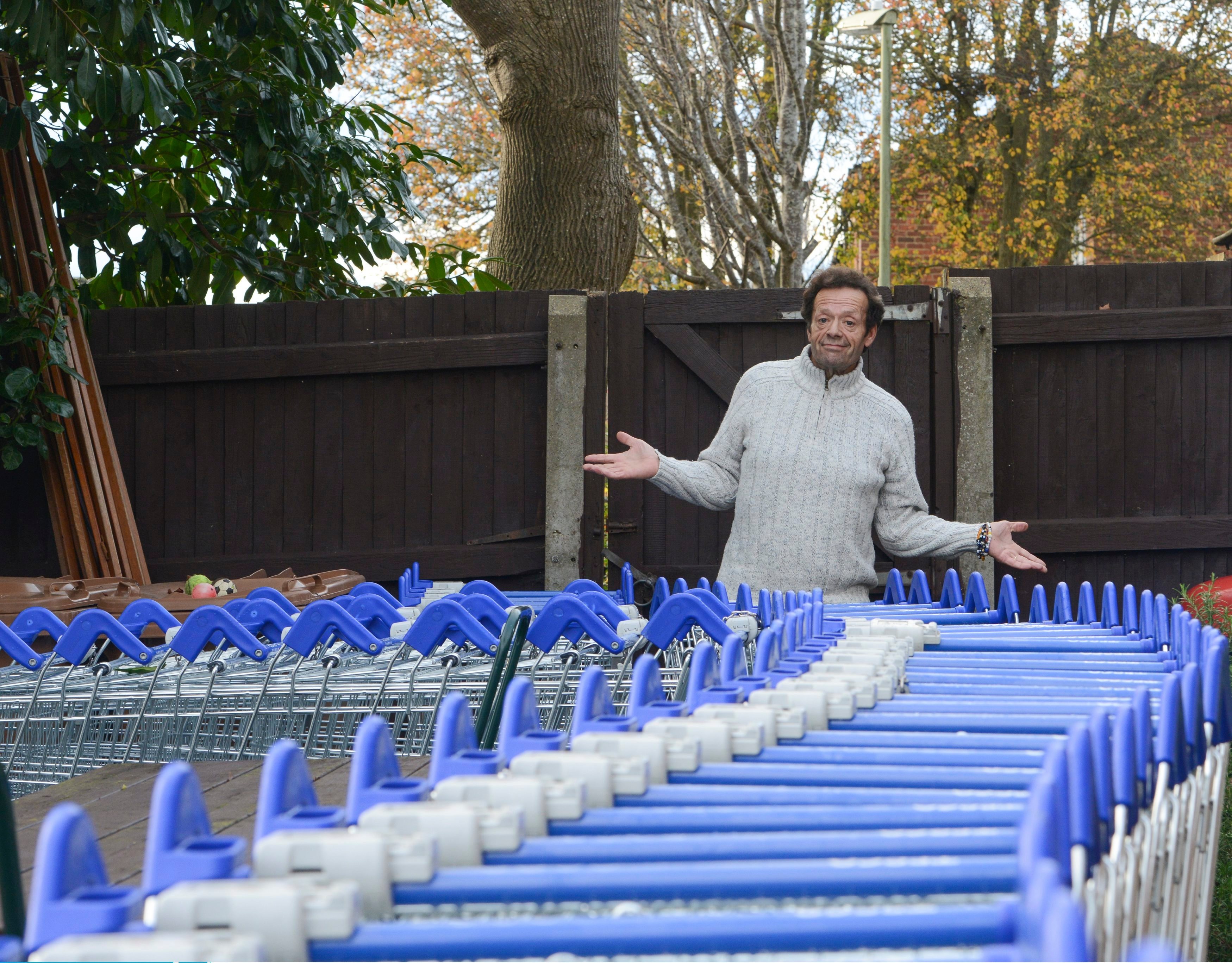 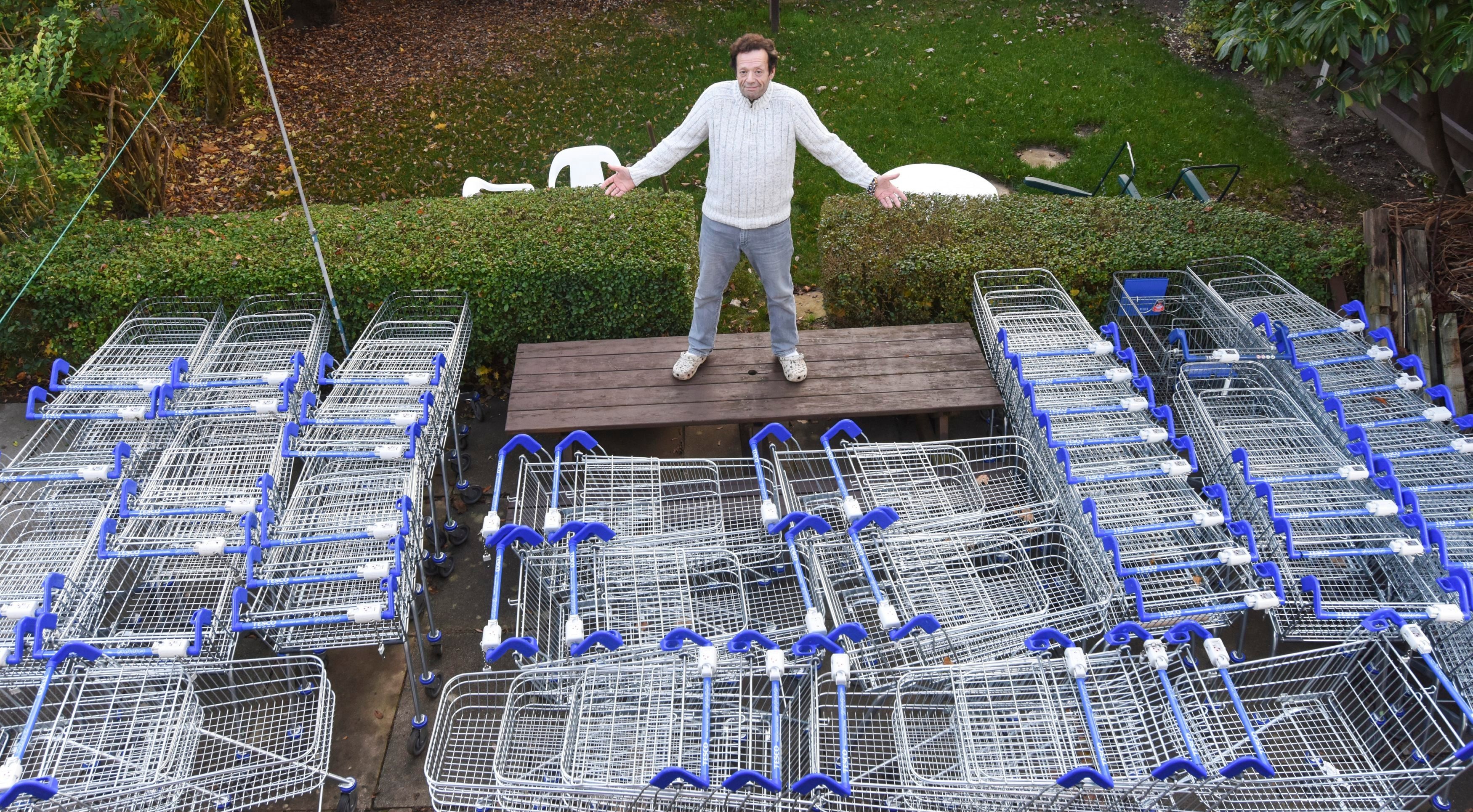 The dad-of-three, of Andover, Hants, found 30 discarded trolleys on an evening walk three weeks ago but since then more than doubled his collection.

His wife Jackie, 65, kept telling him: "Get these bloody trollies out'.

"Bernie said: "She'll be happy as Larry to see them go.

"The next door neighbours have got chickens in their garden – but we've got shopping trolleys."

Bernie reckons shoppers began stealing the carts when Tesco stopped making people pay a pound to use them.

"I found around 30 that night. I was so surprised at how many trolleys there were, and I couldn't believe it when we got to 50. I think it's hilarious."

"I must have had shopping trolleys worth a couple of grand on my patio.

"You don't need to put the pound coins to release the lock anymore.

"They've been disabled because of Covid, so I think that's possibly why there's more of them around.

"Also I think now people are cutting down their shops to one a week and getting bigger shops in – so they could be taking the trolley and walking it home." 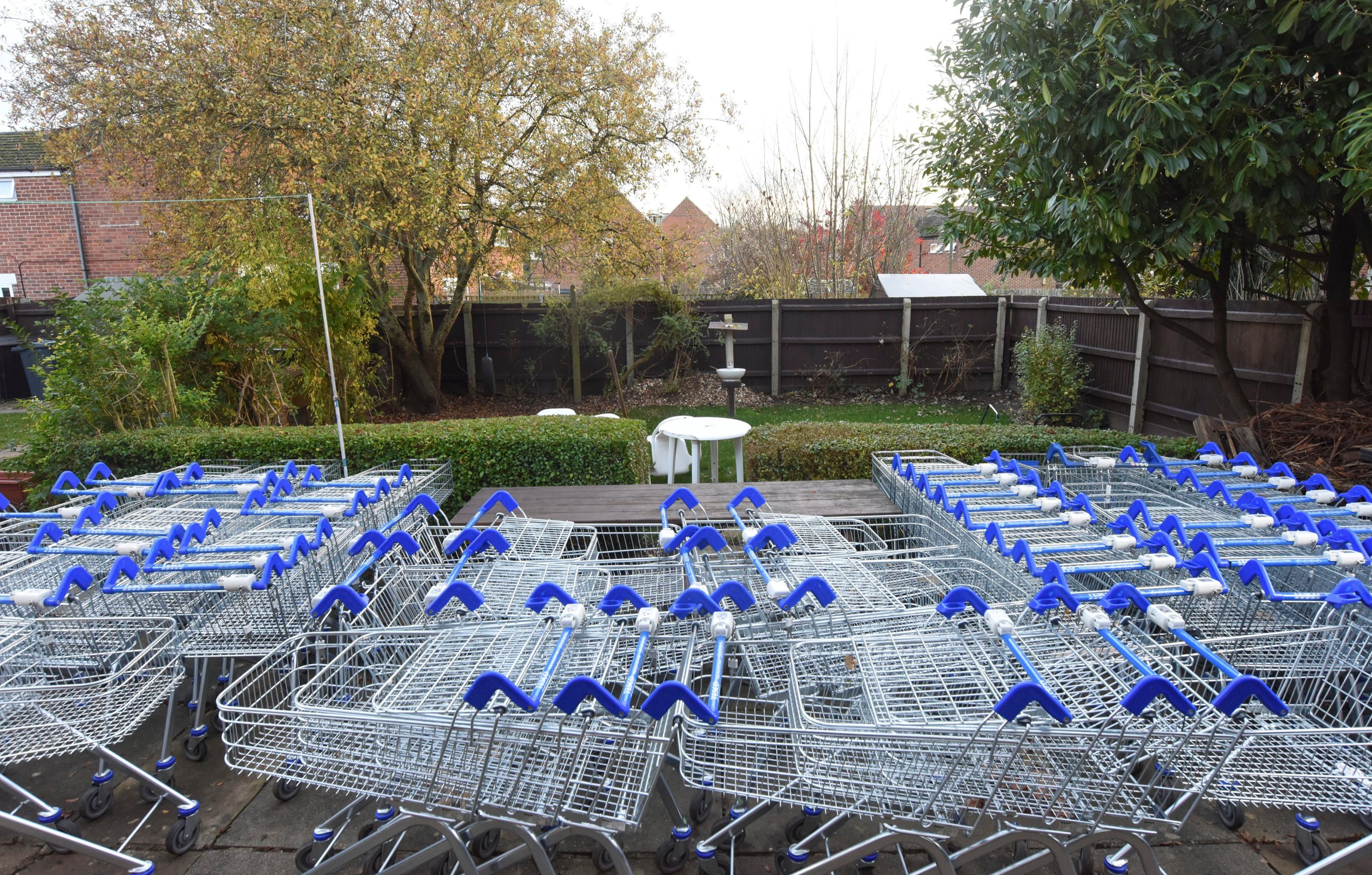 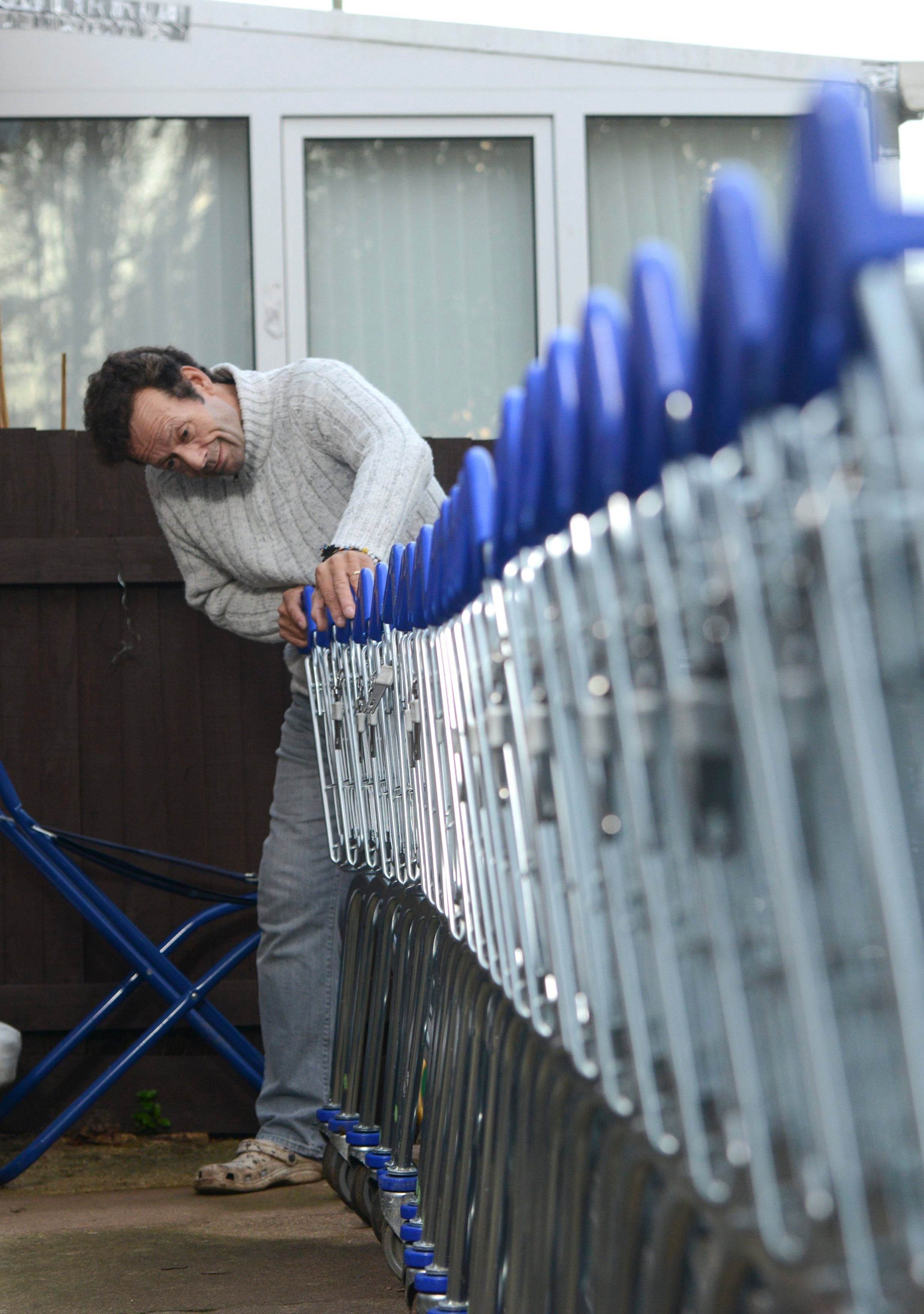 The former shelf-stacker tried for weeks to get Tesco to collect the trolleys says every time he called they fobbed him off.

"The third time I called they said they would pick them up within 48 hours, but it never happened."

A manager at his local Tesco Extra store finally called on Tuesday to say retrieval company Trolleywise would come to collect them.

And Trolleywise finally collected the 65 trolleys this morning.

Bernie said: "Jackie will be over the moon."

A Tesco spokesman said: "We encourage all our visitors to Andover Extra to return their trolleys once they have finished their shop for other customers to use.

"We employ a specialist company to rescue our trollies when they have been taken away from a store and we’d urge anyone who sees an abandoned Tesco trolley to let their local store know so we can get it back as soon as possible.

“We arranged for the trolleys stored by Mr Lucker to be collected and returned to our store and would like to thank him for his assistance and bringing this to our attention.”

Statistics published by Trolleywise state that over half a million trolleys were abandoned in 2017 alone, and that 'trolly loss' costs retailers more than £35m a year.

Bernie revealed his wife was incensed when she discovered the first 30 trolleys in her garden.

He said: "She woke up one morning and said 'what the hell is that on the patio?', I said 'well, what does it look like?'

"She was annoyed at me for bringing so many back. She just thinks I'm nuts.

Jackie, also 65, was diagnosed with Parkinson's disease ten years ago, but still works as a cleaner.

"She's always spent when she gets home in the evenings, but she would rather do that than sit around all day. "I think she's better for it." 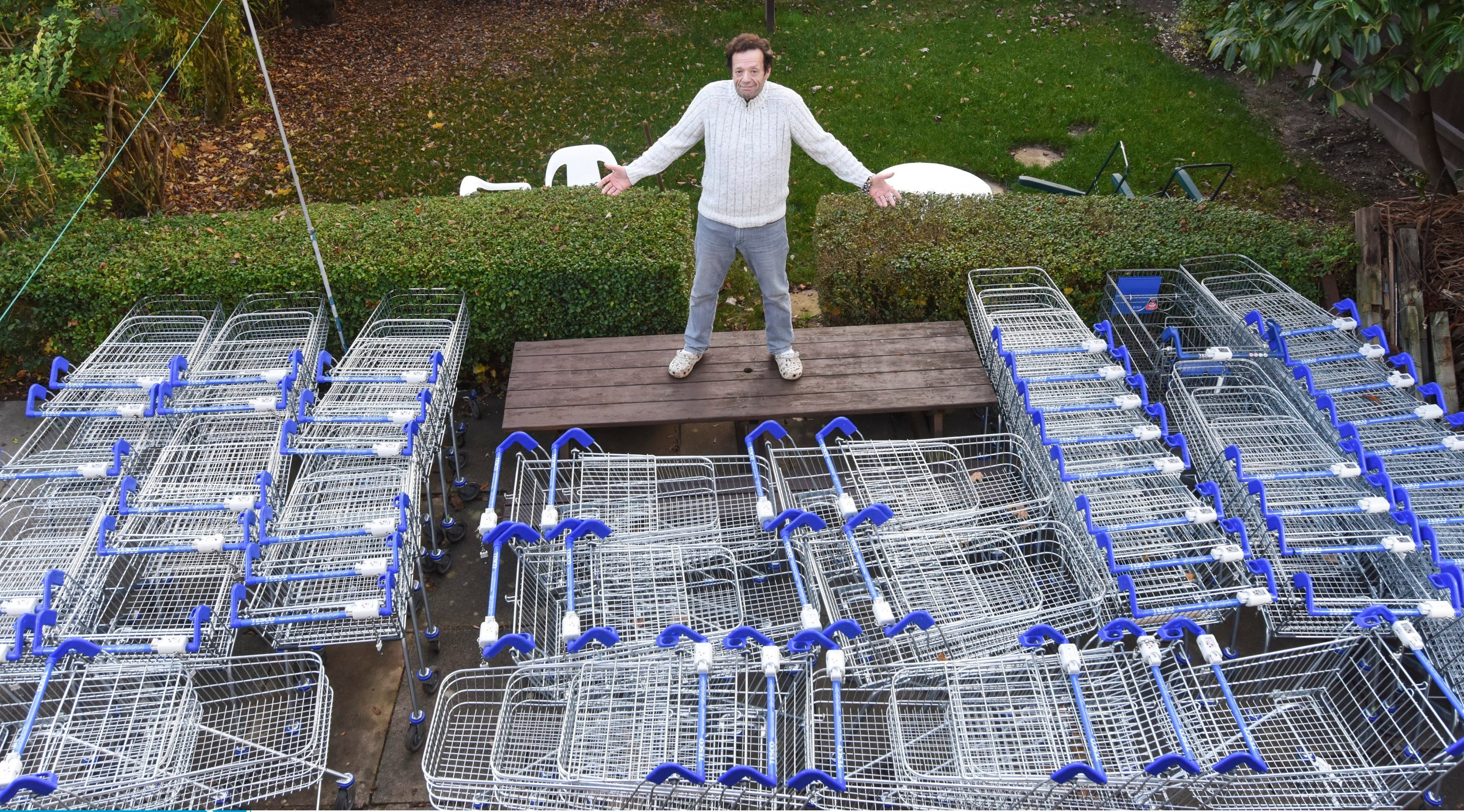 Earl Spencer: ‘I was the first little one Diana cared for’ Princess Diana was known for her love of children and often seemed most at…