The impact of the COVID-19 pandemic on the mental health of young Victorians was exacerbated by the state's hard lockdown according to an internal government report which reveals a sharp rise in the number of teenagers seeking emergency care during stage four restrictions.

The report by the Victorian Agency for Health Information shows a 72 per cent increase compared with last year in the number of serious self-harm and suicidal-ideation presentations in emergency departments for those aged under-18 during the final six weeks of lockdown. 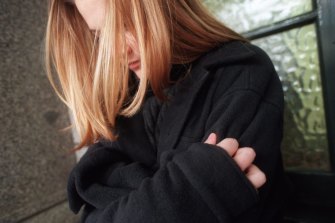 Lockdown has been hard on some young people.Credit:Angela Wylie

Over a six-week period in September and October about 23 young people a week on average required resuscitation or emergency treatment for self-harm or suicidal ideation, compared with about 13 a week over the same time period last year.

On average, 269 young people a week presented at emergency departments because of mental health concerns over the same time period, 23 per cent more than last year.

The number of young people admitted to mental health services soared by 47 per cent, while "triage episodes" for young people requiring urgent care increased by 35 per cent compared with the same period last year.

Eating disorders among teenagers continued on a steep upward trajectory during lockdown, with 40 per cent more ambulance transfers to pediatric mental health facilities during the same six-week period.

Calls to Lifeline, by all Victorians, have also spiked each time new lockdown restrictions have been announced, with more calls being answered each week during the second lockdown than at any time during the first lockdown earlier in the year.

The announcement of stage three and four restrictions by Premier Daniel Andrews, along with the announcement of the state's timeline for reopening, also prompted a significant increase in calls and website visits to Beyond Blue.

While the mental health of the young deteriorated, the government report found the number of self-harm and suicidal-ideation presentations at emergency departments among those aged over 65 fell by more than 30 per cent over the same period.

The report – which was based on data from government agencies, not-for-profit organisations and public hospitals – was released to the "clinical sector" on October 26, when the Andrews government announced it would lift some of the most onerous restrictions.

Despite significant funding by state and federal governments, including $28 million towards students affected during lockdown, the Andrews government pledged a further $870 million this week to reform the state's "broken" mental health system.

Mental Health Minister James Merlino said on Thursday that the new funding was the start of a response to challenges in the system, which, even before the pandemic, the government had conceded was not "fit for purpose".

While grateful for the new funding, many emergency department staff, psychologists and counsellors expect the crisis to deepen.

Stuart Lewena, director of emergency medicine at the Royal Children's Hospital, said mental health presentations had increased by up to 40 per cent over the past six months.

"We've been tracking this since the response began in April, and during that first lockdown we saw a spike in the number of mental health presentations. And we've consistently seen in the realm of 30 to 40 per cent increases above 2019 levels.

"Our total number of presentations had gone down during lockdown, but the number involving mental health has gone up by more than a third," Dr Lewena said.

He doubted the situation would improve significantly in response to the recent relaxation of restrictions.

"This distress among young people is not a tap that can be turned off.

"Children, and adolescents in particular, are uniquely susceptible to the impacts of social isolation that accompanies lockdown. Whilst adults may clearly be impacted, we have at least completed our social development," Dr Lewena said.

Mya Cubbitt, the Victorian faculty chair of the Australasian College for Emergency Medicine, said a confluence of economic and social factors had contributed to the problems in both pediatric and adult mental health, which were the subject of a royal commission last year.

However, the government reporting, according to Dr Cubbitt, was failing to capture the increased severity of metal health cases presenting in emergency departments across the state.

"We're not getting really good data on the really pointy end, which includes what are referred to as 'code grey' and 'code black' cases, where hospital security or police are required to intervene, or the patient is in possession of a weapon," Dr Cubbitt said.

She said the issue posed a significant safety threat to emergency department staff, while also placing a further burden on police resources.

The rise in acute cases had not resulted in an increase in deaths by suicide, according to the Coroners Court of Victoria.

As of October 31, there had been 580 deaths by suicide in Victoria, compared with 600 from the same 10-month period in 2019, according to figures released this week.

But former mental health commissioner Ian Hickie warned of an impending jump in self-harm over the next few months, based on modelling by the University of Sydney's Brain and Mind Centre.

Professor Hickie said young people in Victorian had been hardest hit by the pandemic, but received the least government support of any cohort.

"Young people have not been the focus of government initiatives like JobKeeper and JobSeeker, most of the support has gone to the middle-aged and families and businesses. The educational and social disruptions experienced by the young have not been adequately addressed," Professor Hickie told The Age. 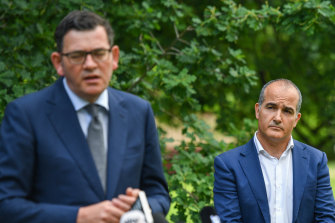 An Andrews government spokesman said significant investments had been made in the sector to "ensure Victorians get the care they need, during and well beyond the coronavirus pandemic".

"We know how tough 2020 has been for many and recognise that the mental health effects could long outlast the global pandemic," the spokesman said.

If you or anyone you know needs support call Lifeline on 131 114, or Beyond Blue's coronavirus mental wellbeing support service on 1800 512 348.