Football fans returning from Qatar are being advised to watch out for the signs of camel flu – a potentially lethal respiratory illness – symptoms of which include a fever, coughing and vomiting.

Middle Eastern respiratory syndrome (Mers) can be contracted through close contact with camels, according to the UK Health Security Agency.

The body has warned UK clinicians to ‘be alert’ to the prospect of returning World Cup fans showing signs of illness, The Times reports.

A briefing note states: ‘The risk of infections to UK residents is very low but may be higher in those with exposure to specific risk factors within the region – such as to camels. 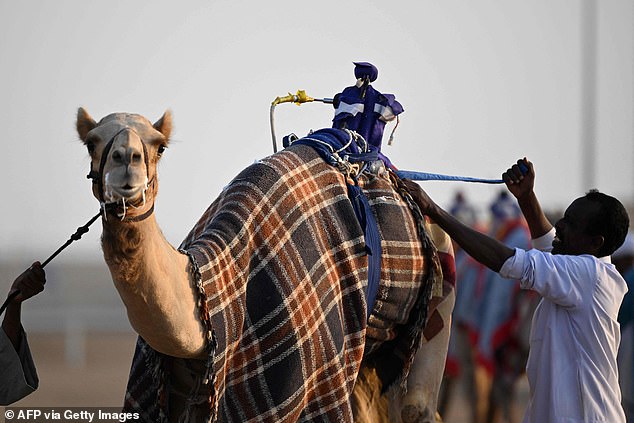 Camels are thought to be the natural host of the virus, which is from the same family as the virus behind the Covid pandemic

MERS SYMPTOMS: Its symptoms include a fever, cough, breathing difficulties, diarrhoea and vomiting

‘Mers can be acquired from close contact with camels or from consuming camels products eg, unpasteurised camel milk.’

Other risks include close contact with an infected person. Many excited fans are reported to have enjoyed camel rides in Qatar while following England’s journey in the World Cup.

Five instances of Mers have been reported in the UK to date, with the last known occurrence in August 2018.

Routine guidance was issued by the UK Health Security Agency last month, with no new cases yet reported.

The disease was first recognised in 2012 and since then, there have been 2,600 cases worldwide – mostly in the Arab peninsula, The World Health Organisation reports.

Over a third of infected patients are reported to have died. Two cases have been recorded in Qatar.

Symptoms if the disease include fever, coughing and vomiting.

Anyone coming back to Britain with tell-tale MERS symptoms, which are like that of a cold or flu, are told to seek medical advice and share their travel history, so infection control and testing can be done.

Similar measures sparked an Ebola scare in the UK last week, after a person in the UK who had been in Uganda — where the virus is roaming — developed cold-like symptoms.

There is no specific treatment for the illness, so doctors work to ease a patient’s symptoms. Around 35 per cent of those who get MERS die as a result.

What is ‘camel flu’?

People can catch MERS from infected animals — though doctors say camels in the Middle East are the main source of the virus. The virus was first detected region in 2012.

It can also be transmitted through an infected person’s cough droplets — but this is rare.

There have been five cases of MERS in the UK since 2012, with the most recent occurring in August 2018.

Its symptoms include a fever, cough, breathing difficulties, diarrhoea and vomiting.

There is no specific treatment for the illness, so doctors work to ease a patient’s symptoms.

Around 35 per cent of those who get MERS die as a result.