‘F*** knows. I’m past caring. It’s like the living dead in here’: Cabinet minister ‘captures mood of the nation’ on Brexit in foul-mouthed quote read out on air by Newsnight’s political editor

The paralysis at the centre of Britain’s government has been exposed by a minister who described the cabinet as ‘the living dead’ in a foul-mouth rant.

Britain awaits the result of yet another vote on Theresa May’s Brexit withdrawal deal, with almost no idea what will happen if it is voted down.

A minister’s angry tirade about the situation was revealed by Nicholas Watt, the political editor of BBC’s Newsnight show, last night, after he spoke with the cabinet member. 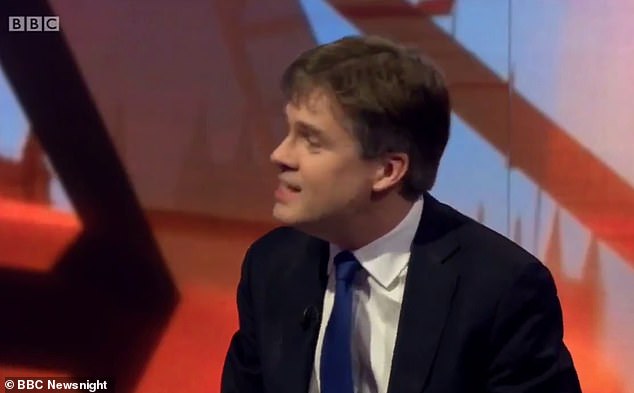 Mr Watt told show host Emily Maitlis the minister had told him cabinet is like ‘the living dead’. Ms Mailtlis replied with a tortured ‘oh God’

Mr Watt said: ‘In cabinet, I am picking up complete and utter despair. I said to one cabinet minister: “So why is the Prime Minister holding a vote when she’s pretty sure she’s going to lose?”‘

‘Using very strong language this cabinet minister said to me “F*** knows! I’m past caring. It’s like the living dead in here”.

‘This cabinet minister said to me: “Theresa May is the sole architect of this mess. It is her inability to engage in the most basic human interactions that brought us here.”

‘[The minister continued:] Cabinet has totally broken down, ministers say their bit. She gives nothing away. One side thinks X will happen. The other side think Y will happen. And the Prime Minister decides on Z.’

Viewers with dark senses of humour branded the sudden outburst of honesty ‘the TV moment of the year’.

One joked: ‘Give Nicholas Watt the Pulitzer!’

Viewers cheers the outbreak of honest language, saying the minister ‘spoke for the nation’

Nick Gendler tweeted: ‘More poignant than Nicholas Watt’s reporting of the cabinet minister’s sweary outburst against the PM was Emily Maitlis’s reaction. Her despairing “oh God” spoke for the nation.’

The sense of despair around today’s vote continued when Emily Maitlis told minister Tobias Ellwood: ‘You’re putting back on the table a horse so dead, flogged to death, it’s practically a glue stick.’

Theresa May is battling to get her Brexit Withdrawal Agreement backed by the Commons on the day that was scheduled to see Britain quit the EU.

The Prime Minister split the legally binding treaty segment of her Brexit deal from the declaration on future relations with the EU in order to ensure MPs could vote on it on Friday.

But Mrs May faced an uphill struggle as key Government allies the DUP joined Labour leader Jeremy Corbyn in saying they would vote against the move.

We will use your email address only for sending you newsletters. Please see our Privacy Notice for details of your data protection rights. Younger royal…