It has never been much more than a large shed with a nicely sprung floor, but Festival Hall was Melbourne’s undisputed home to popular culture in the 1960s.

On a Friday night – May 22, 1964 – the fight crowd rolled in to roar and inhale the mingled scents of sweat, liniment, fear and blood as a handsome young man named Jean-Pierre “Johnny” Famechon strapped on the boxing gloves against local champion Les Dunn.

Famechon, aged 19, fast on his feet, faster with his gloves and, with the swing and sway of a ballroom dancer, difficult to hit, upset the order of things by stopping Dunn with a technical knockout in the 10th round.

Twenty-six days later, on Wednesday, June 17, 1964, another crowd went even wilder when a band called The Beatles began a two-night stand at the same venue.

About 250,000 people, according to police, had mobbed the city streets and lined the route from the airport to welcome The Beatles to Melbourne.

Five years later, a Melbourne crowd at least as large welcomed Famechon home from London, where he had danced around the Royal Albert Hall, outboxing featherweight world champion Jose Legra. 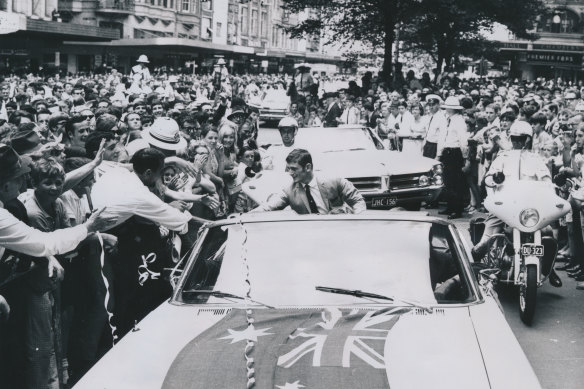 The Australia of 1969 could barely contain itself. Famechon, the new world champ, was hoisted to the balcony of Melbourne Town Hall, a sea of excited faces filling every street below.

Only a year before, another handsome young man, Lionel Rose, got the same treatment when he returned from Japan, where he had taken the bantamweight world title from Masahiko Harada, better known as Fighting Harada.

Rose, the first Aboriginal world champion, famously thought he’d arrived in Melbourne at the same time as some famous rock band. He couldn’t believe such crowds would turn out for him.

Strange to relate from this distance, with boxing much diminished, but Famechon and Rose, exponents of the most unforgiving and lonely of sports, were rock stars in ’60s Australia.

Festival Hall, Melbourne’s only large entertainment venue at the time, was known as “The House of Stoush” when it wasn’t showcasing real rock bands.

It was for a decade the setting for one of television’s most popular weekly shows, TV Ringside. The show featured Channel 7’s Ron Casey commentating and sidekick Merv Williams, a sportswriter and an old bruiser himself, providing the one-liners (“this bloke has less chance than a crippled prawn in a flock of seagulls”).

Every week an apparently endless line of the talented, the hopeful and the washed-up came to test their fortune in the ring, the bellowing crowd and the TV cameras merciless in their judgment.

Lounge room sofas were fully occupied across the land when TV Ringside was on the box.

Little wonder, perhaps, that boys of the time were drawn to imagine themselves in the ring. 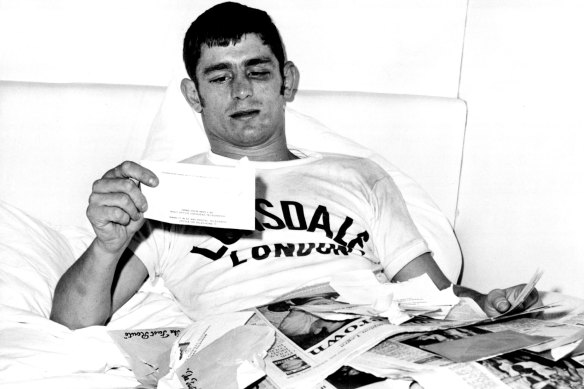 Every country show had a boxing tent in sideshow alley, the fighters lined up in their dressing gowns, a spruiker banging a drum and inviting locals to try their chances.

One year at the now defunct Heywood show in south-west Victoria, the spruiker called out for any boys willing to mix it with the son of one of the boxers, an Aboriginal boy about my age, which was all of 10 years. Prodded by mates, I put up my hand. Absurd.

A minute in the tent with the little travelling fighter was enough. We flailed and I suspect I wailed. The spruiker called it a draw and told the crowd to “give the little fellas a shower” of coins. The money was rolled in canvas and the tent bloke took us out the back and gave us a bob each.

My father, when he heard of this exploit, instructed “don’t tell your mum”. And that was about as close as I ever got, apart from a couple of scraps at school, to becoming a practitioner of what romantics call the Sweet Science.

The term struck me as unfathomable, or at least ironic, until I learned the full reference was the “Sweet Science of Bruising”, a name given to the sport in the early 1800s by British enthusiast and writer Pierce Egan, in one of his great essays in Boxiana, or Sketches of Ancient and Modern Pugilism.

In Australia, the Sweet Science of Bruising turned out to be palatable to a very wide audience because, mercifully, TV Ringside was in black and white.

When colour TV arrived in 1975, families at home found themselves confronted with technicolour blood spraying across their screens. TV Ringside died, killed by reality.

Victoria gave Famechon, who died in August aged 77, a state memorial service on Tuesday this week. It seemed only right that it should be at the old House of Stoush.

Famechon fought 51 of his 67 fights at Festival Hall. He lost only two of those 51 fights, and avenged both of them with subsequent wins. 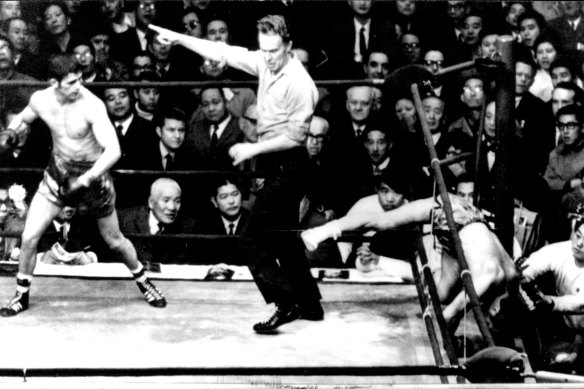 Tokyo, January 1970: Famechon retains his title by knocking “Fighting” Masahiko Harada out of the ring.Credit:Age archive

In other words, said the master of ceremonies at the memorial service, sports journalist and commentator Bruce Eva, “no one ever bested him under this roof”. “This is Fammo’s house.”

“Fammo”, the last of Australia’s rock star fighters, retired, still handsome, aged 25 in April 1970, having knocked Fighting Harada clean out of the ring in one of his last fights.

At almost the same time, Paul McCartney announced that The Beatles had broken up. The ’60s were gone forever.