Family living near country club wins $4.9 million in damages after being ‘terrorized with golf balls’ that shattered nearly all their windows and forced neighborhood children to wear helmets while playing outside

A family living near a country club in Massachusetts won $4.9 million in damages after being ‘terrorized with golf balls’ that obliterated the side of their house, shattered nearly all of their windows, and forced neighborhood children to wear helmets while playing outside.

In 2017, Erik and Athina Tenczar purchased what they thought was their dream house at Indian Pond Estates in Kingston, Massachusetts.

Then golf season began – and it became their nightmare.

Over the years, the couple, who are raising three young daughters at the home, have collected nearly 700 balls on their property, many of which sounded like gunshots as they hit the side of their house.

‘When it hits, it sounds like a gunshot,’ Athina Tenczar, 36, told the Boston Globe. ‘It’s very scary.’

After years of worrying for their family’s safety, and claiming they got little to no response from the country club, the couple decided to pursue legal action against Indian Pond Country Club for trespass over the continual bombardment, their attorney Bob Galvin told DailyMail.com.

In December 2021, the Tenczars were awarded $3.5 million for damages, and mental and emotional suffering following a six-day jury trial. With interest, the award totaled $4.9 million. 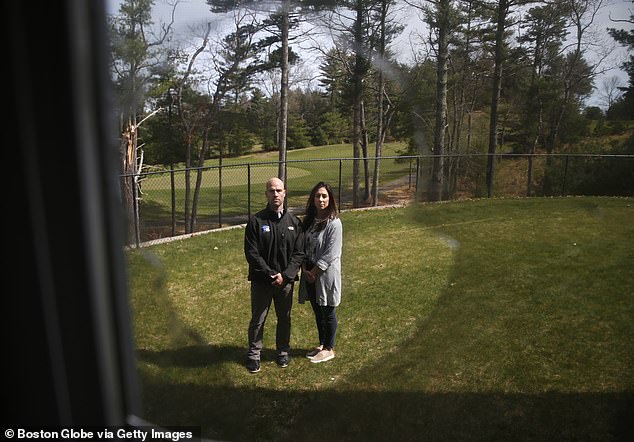 Erik and Athina Tenczar were awarded $3.5 million (with interest $4.9 million) for damages and mental and emotional suffering after being ‘terrorized with golf balls’ for years 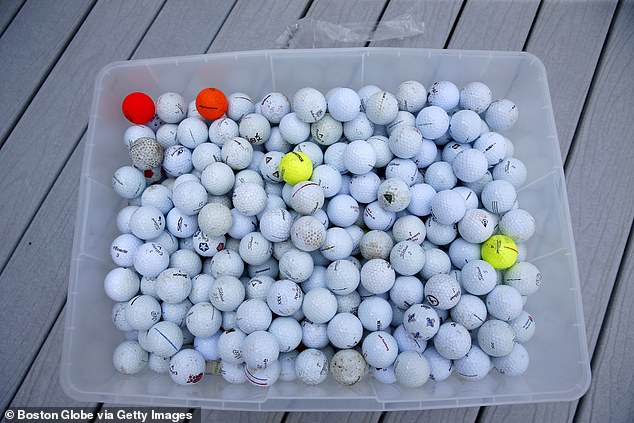 Nearly 700 golf balls have been collected by Erik and Athina Tenczar on their property in Kingston, Mass., near the Indian Pond Country Club. Many have shattered windows and left dents in the house siding, leaving the family in fear for their safety 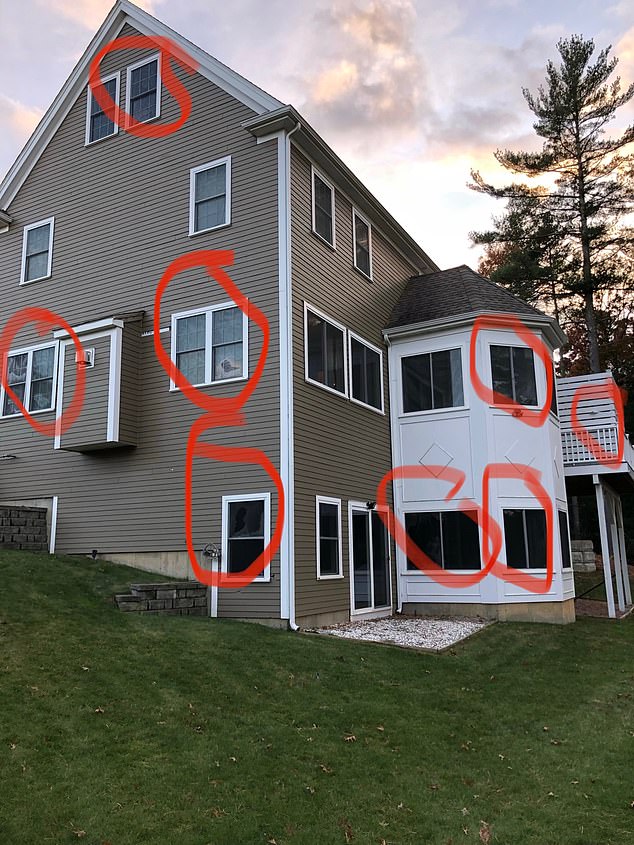 When the Tenczars, who are not golfers, bought the house for $750,000 back in 2017, they figured there would be some issues being so close to the course, but had no idea the extent of what they were about to go through.

Instead, they fell in love with the four-bedroom, 3,000-square-foot house on Country Club Way that had sweeping views of the 15th fairway, and moved in right away.

‘Honestly, if you have all these houses on a course, I assumed it was safe,’ Athina Tenczar said.

But the Tenczars’ home is elevated on a bank of land that puts it in the line of fire from the 15th tee. Their neighbors’ homes, however, are less affected.

And when golf season started, it quickly became clear to the couple that they were anything but safe. They had only been living in the house for about a month when they had their first close call with a golf ball.

Erik Tenczar told the Boston Globe he was unbuckling their newborn daughter from her car seat in the driveway when a golf ball came whizzing in, just missing them and landing at his feet.

It was the first of many. Golf balls came flying onto their property frequently during golf season, many of them shattering windows with such force that glass sprayed all over their children’s’ toys and into the next room, their attorney said. Golf balls hit their deck, taking out part of the railing.

Attorney Bob Galvin told DailyMail.com that the family hasn’t been able to sit outside and enjoy their deck or patio during golf season without the constant fear of being hit. Once, they filled up the kiddie pool, and a golf ball crashed into the water.

Other children in the neighborhood wore helmets when they played outside nearby.

‘They haven’t been able to have birthdays or just enjoy being outside during golf season,’ Galvin said. ‘They truly feared for their safety.’

Galvin said the golf balls obliterated the side of their house, leaving siding falling off. The family stopped making the costly repairs and resorted to covering the windows with plastic sheeting. 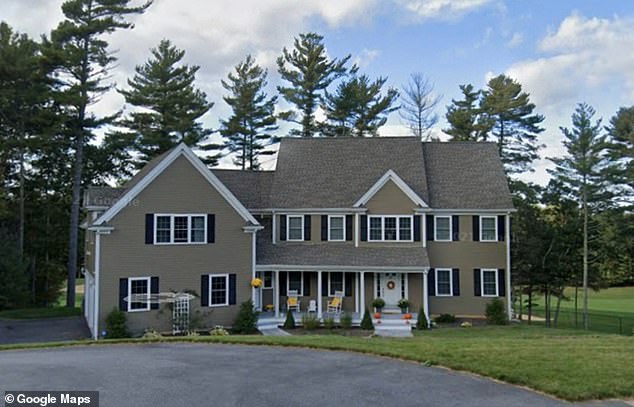 The $750,000 four-bedroom, 3,000-square-foot house on Country Club Way is a straight shot from the 15th tee of the Indian Pond Golf Course in Indian Pond Estates 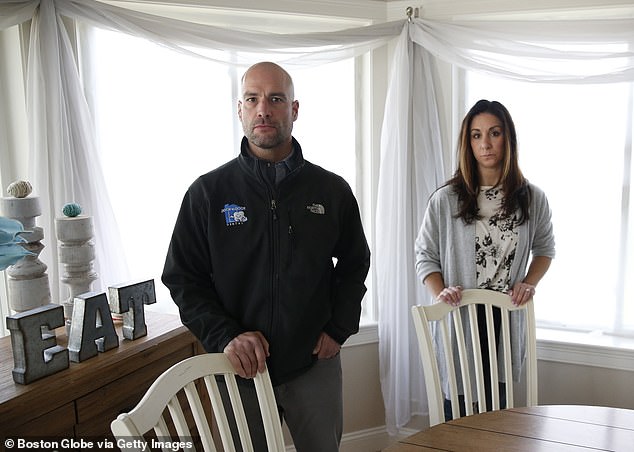 Erik and Athina Tenczar said they didn’t want to file a lawsuit, but felt they had no choice when they say they received little to no response from the country club

Galvin told DailyMail.com that the Tenczars repeatedly asked for help from the golf course owner and even obtained a proposal to install a net on their property before filing the lawsuit.

But they received little to no response from the owner regarding the proposed solutions, Galvin said.

‘We never wanted a lawsuit; nobody wants a lawsuit,’ Athina Tenczar said. ‘We tried to go in civilly and work with them. We got some communication, but then it stopped.’

John Flemming, the country club’s lawyer, told the Boston Globe that the club consulted with the golf course’s architect and tried a number of suggestions.

‘It’s not true that the golf course didn’t do anything,’ Flemming said. ‘A suggestion that we were completely unresponsive, I don’t think is accurate at all.’

The country club has since reconfigured the tee box for the 15th hole, and the Tenczars’ attorney said it’s been months since they’ve seen a golf ball on their property.

But in March, lawyers for the country club filed a notice that it would seek to appeal the case.

‘I’m extremely confident that the injunction will be struck down,’ Flemming said. ‘In my opinion, as a matter of law, the verdict of $3.5 million for alleged emotional distress is against the weight of the evidence.’

The Tenczars’ attorney disagrees. He said he believes the jury got it right back in December and that the verdict will be upheld.

When people inquire about the Tenczars looking into the chances of their house being hit since it is on a golf course before buying, Erik Tenczar said: ‘Probably. I don’t know. We just fell in love with the house. It was our first house.’

But their dream house became their prison, Galvin pointed out.

‘They bought what they thought was their dream house and it became a nightmare for them,’ Galvin said. ‘They couldn’t do anything outside during the golf season.’

Galvin told DailyMail.com that the family now has to have 26 windows replaced as well as all the siding on two sides of the house because of ‘golf ball sized holes in it.’

‘I realize this is a lot of money, but it was never about the money to them,’ Galvin added. ‘They did not feel safe at their home.’